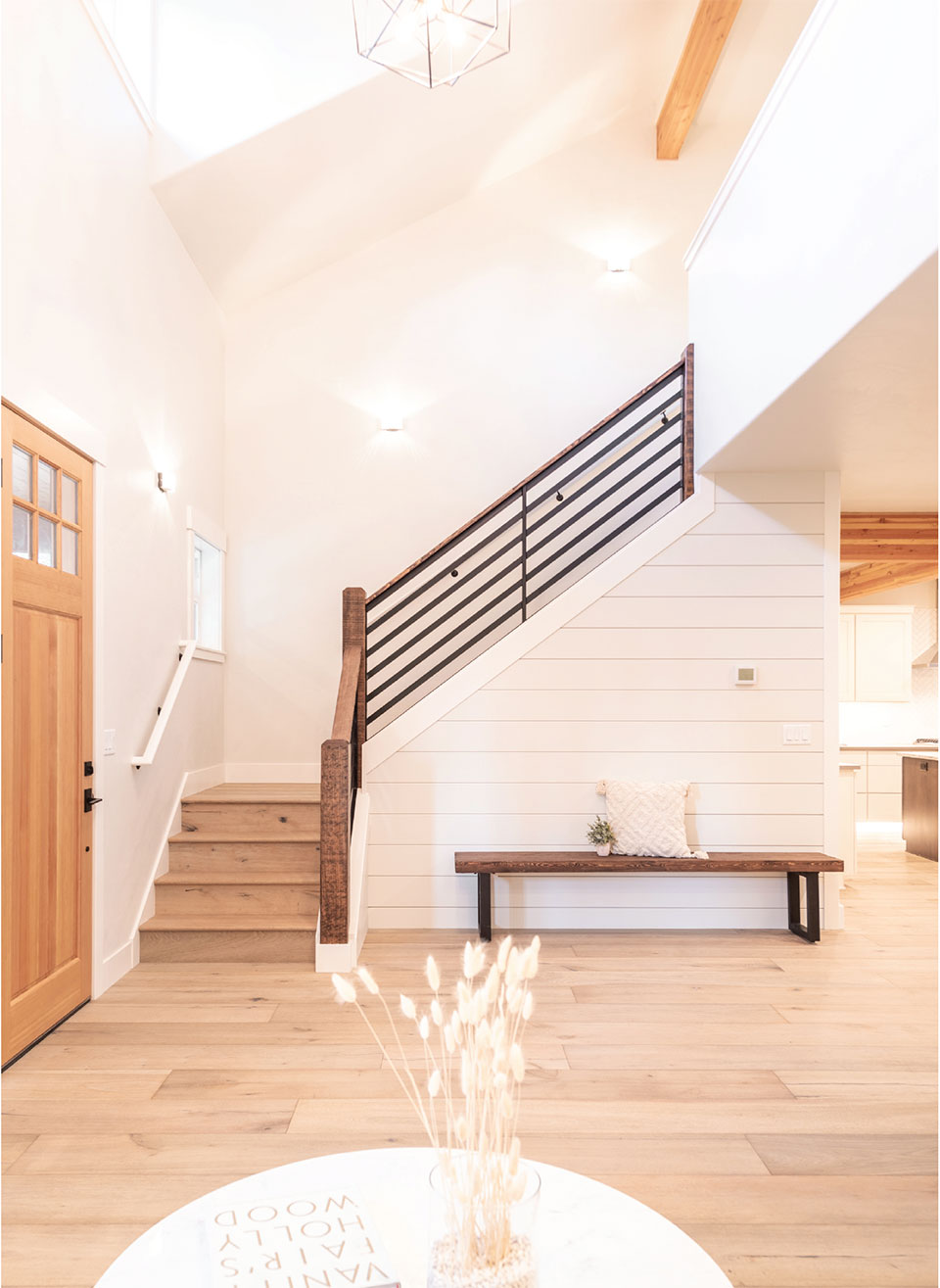 Home designer Darrin Hollyman of Hollyman Design has been designing high-end custom homes for over 20 years. He is well-versed in Bend’s city code and has decades of experience designing custom homes for gated communities. He is the consulting building designer at Brasada Ranch, and relies on his familiarity with the design review process to submit comprehensive plans to high-end communities across Bend that go through their respective review processes in a timely manner.

“A lot of this home’s modernitY comes from how it is lived in.”
–Darrin Hollyman, Hollyman Design, LLC 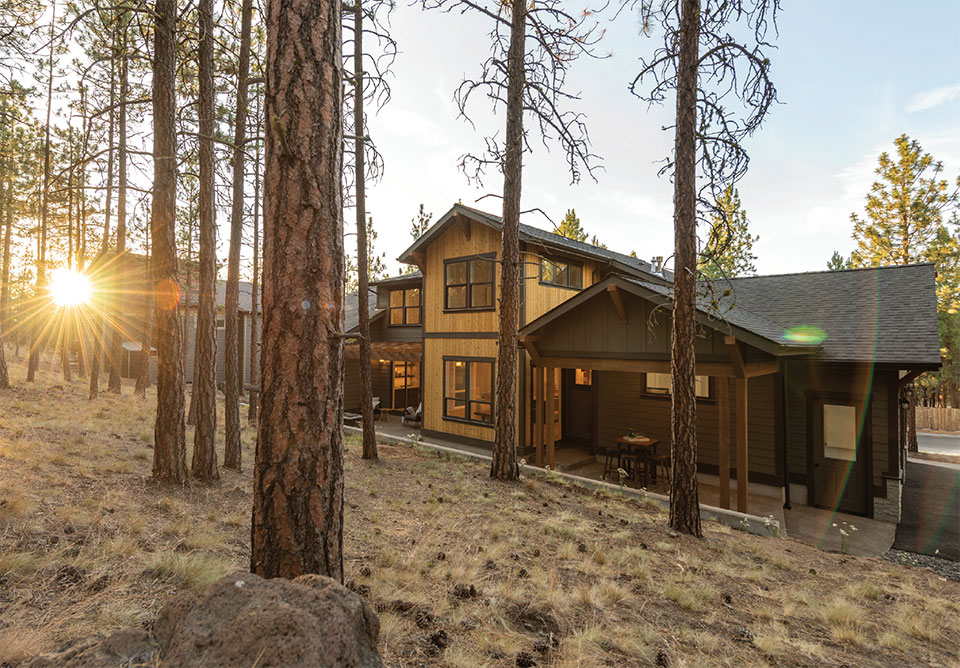 “When I design, I pay attention to room placements and what happens in those rooms, such as creating the opening from the great room to the outdoor terrace for entertaining.”
–Darrin Hollyman, Hollyman Design, LLC

A lot, a photo, and a coffee meeting were all that Hollyman needed to design an award-winning modern craftsman house in Bend’s Awbrey Butte. Builder Ty Biddle of OmniBuild called Hollyman with a vision for a house that would fit his property. The undeveloped lot had a park-like setting filled with trees and wildlife passing through. By the end of their meeting, Hollyman had his own idea for the project.

The completed house is 2,800 square feet and has three bedrooms and three baths plus a bonus room. It has horizontal lap siding, black window casing, and a tower with vertical tongue and groove for a modern flair. It has exposed beams on the porches with large corbels. The wood and stain integrate the house into the forest and tie the structure to the land, creating a beautifully grounded connection of form and function. Clean wood and finishes inside the home further define this modern craftsman masterpiece.

Hollyman does not normally design spec homes, but when he and Ty sat down for coffee, he understood the goals and saw an efficient path of how to do it. He was most attracted to the challenge of creating a design that fit the project’s needs and budget. In Hollyman’s words, “Ty grabbed an image and I went to town with it.”

Although they had not worked together before, the building team took Hollyman’s designs and completed the house on their own with minimal follow-up questions. The plans made sense and were easy to execute. The finished house won the COBA Best Architectural Design award, a testament to the teamwork and collaborative effort that went into bringing it to life.

EXPERIENCE TO MAKE IT BETTER

Hollyman took the idea for modern craftsman and designed something that was a departure from the original photo. He created better flow within the house. He brought the outside in and the inside out with both a front porch and a back terrace. Sixteen-foot double sliding glass doors open up and create a path straight through the house for entertaining and emphasize the connection between the house and land.

Ty recalls, “I had an idea in my head, but bringing it to paper was tough. Hollyman created the plans based on my vision, but also added the essential functional aspects to it that were helpful. He had great feedback.”

Hollyman’s decades of experience working in the design-build industry means that he has dealt with a variety of builders. More importantly, he can envision how they will build the house so he can make plans that help the whole process run more smoothly.

One of the more striking features in the house is Hollyman’s layout of the exposed beams on the first floor. They are true bearing beams that naturally divide the great room and offer real support for the house. Although it’s all one room, the beams create feelings of separation between the kitchen and den. A separate master wing of the house extends down a four-foot-wide hallway behind the fireplace. The resulting design flows intuitively. It feels open and integrated with the beams as the common theme, but there are also independently functional areas within a greater space.

Ty recalls, “We were pretty far along in the building process, and there were a couple of adjustments we had to make that Hollyman helped us with. For instance, originally, we were going to have a deck above that exited out of the bonus room upstairs. Hollyman guided us toward a pergola that allowed more light into the first story and the great room. A deck would’ve been nice for upstairs, but to have that sunlight coming in really helps the feeling of the inside of the house.”

The finishes complete the modern feel inside the home. The downstairs staircase has slatwall with horizontal lines juxtaposed against custom-welded vertical picket handrails. Large plank 7” x 10’ European oak flooring creates a memorable experience through the front door. The color looks gray from a distance, but up close, reds, greens, and browns are revealed too. Contemporary barn doors off the kitchen were created from hand-milled custom tongue and groove raw alder.

“A lot of this home’s modernity comes from how it is lived in,” explains Hollyman. “When I design, I pay attention to room placements and what happens in those rooms, such as creating the opening from the great room to the outdoor terrace for entertaining. Windows should be thought out intuitively based on how the rooms will be used.”

From the initial site visit, Hollyman had a good idea of where the rooms would be located and designed based on being nestled in the pine trees. “You want to make sure there’s privacy with a home in the trees with natural landscaping. That changes the placement of windows, compared to a home with mountain views, which tend to have more windows,” he explains.

Hollyman, who is now wrapping up the second of three homes in Brasada Ranch, says, “The finishes on the inside tied it together. My drawings were of a high-desert modern craftsman. Ty took his time and built it the right way. Winning the COBA Award for Best Architectural Design means the world to us.”