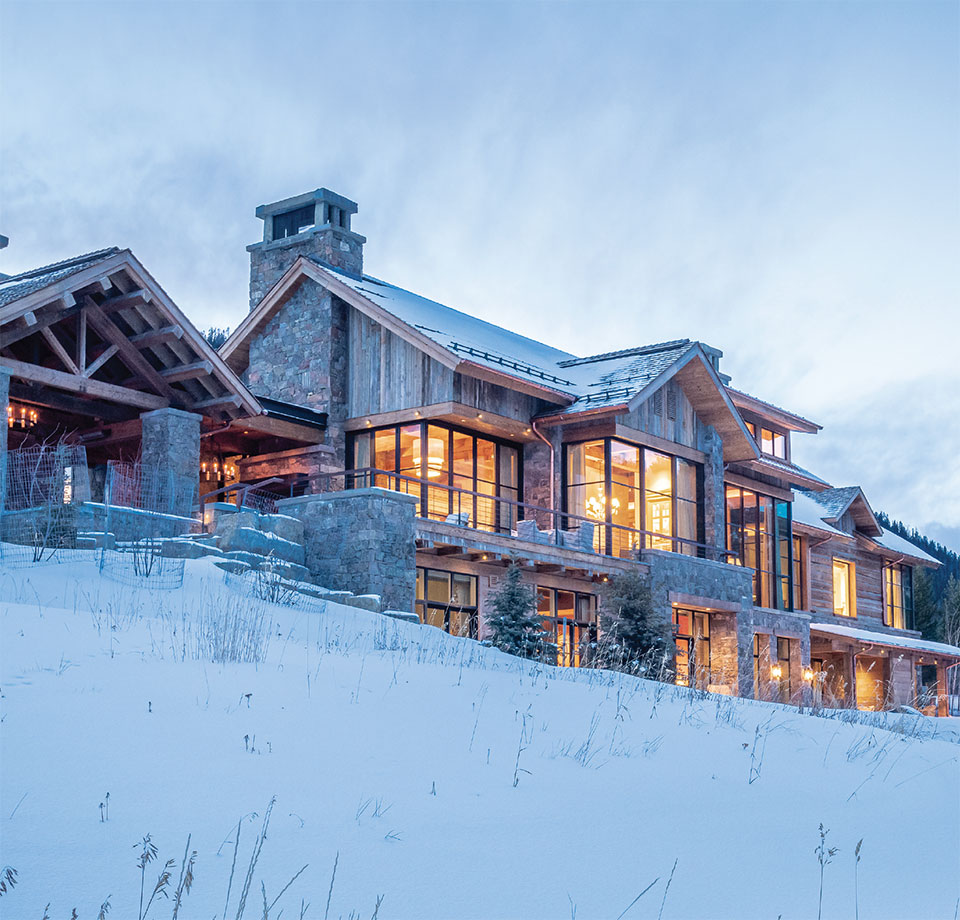 As solid and unyielding as the granite they build on are the core tenets deep within the foundation of Schlauch Bottcher Construction (SBC) – dedication, skill, excellence, commitment, and honesty – all of which drive the process of each building project through individuals dedicated to these principles. From the office to a jobsite at 9,400’ in southwest Montana’s rugged landscape, SBC demonstrates an established culture of trust and shared values, a solid team grounded with an outstanding reputation building custom luxury dream homes in Big Sky Country. 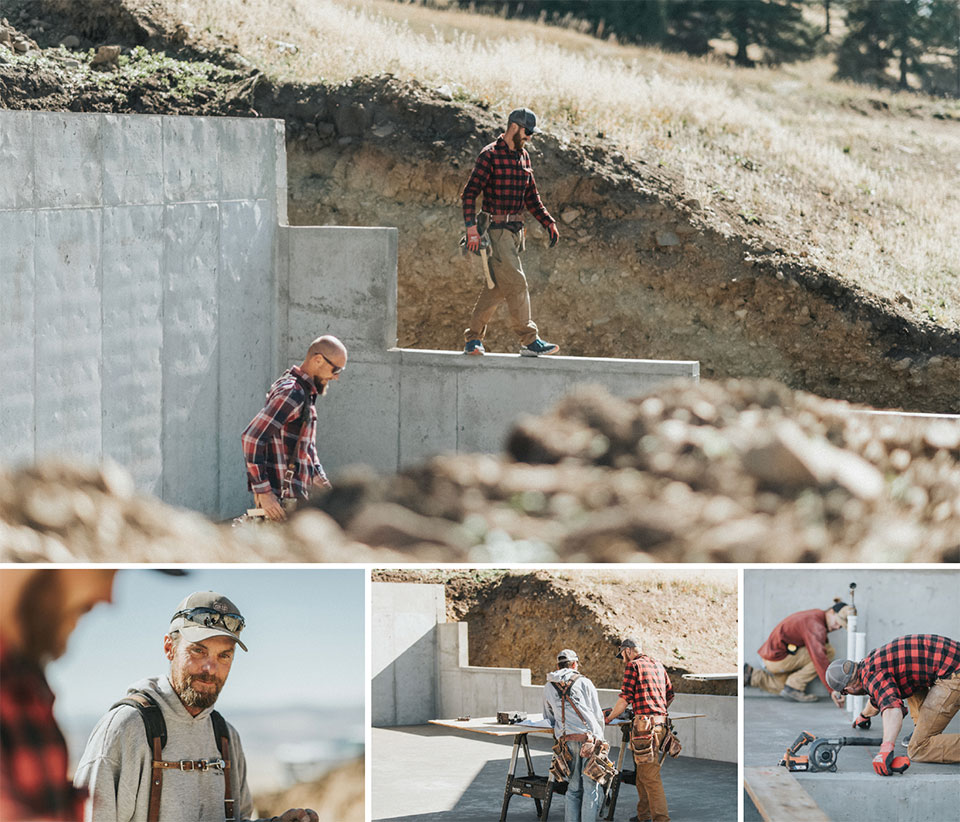 SBC partner Jamie Bottcher asserts that the feat of mountain building is achieved by way of dedicated people and consistent process. Bottcher, along with his brother and business partner, Chad Bottcher, and Nate Boersema, Timber Operations Manager/partner, are effective leaders who motivate their team to take ownership, be creative, and care as much about the home as the owner. Their lead-by-example style is what enables SBC’s reputable, pervasive team culture to flourish, attracting individuals who are motivated and passionate about what they do.

“If you want to build the best homes, you’ve got to work for the best.”

Justin “J-dog” Hunley, Project Foreman, has worked with SBC for 17 years, and had his hand in construction since he was that age. The Wyoming native joined up with SBC because of their reputation. “If you want to build the best homes, you’ve got to work for the best,” says Hunley. Keenly aware of his responsibility to share experience and knowledge with younger crew members, Hunley knows that trust is critical when setting trusses and rafters 30 feet in the air. “Never look past your feet, ever,” he says.

Matt Tucker, Project Support, spends his days organizing and prepping reclaimed lumber in the log yard and getting material to the crews. His take on company leadership – “Chad, Jamie, and Nate are always willing to go above and beyond with respect to their employees, making sure we are all taken care of,” he says. “I am proud to be part of a team that strives to be the best.” Behind the scenes in the office, Russell Anderson, Lead Estimator, digs deep into the details creating budgets and crunching supply numbers for accurate estimates. He and his wife moved from California to the Gallatin Valley to raise their boys and SBC has been a good fit for eight and a half years. Says Anderson, “We have a great team within SBC and a great team of architects, engineers, designers, subcontractors, and suppliers we regularly work with.”

It doesn’t matter whom you ask – the common denominator is always the team. Tim Dailey, Trim Project Supervisor and cabinet shop manager, has been with the company for 18 years and can build anything from a napkin sketch or photograph. “I was brought up to work hard for something you want,” he says. “There is a pride of craftsmanship within our team that goes into each of our projects.”

So many key factors contribute to the overall execution of a well-crafted, exceptional home.

The expertise and personal investment of the contractor’s team must exist at every level. While still in college at MSU, Tim Shonkwiler, Project Supervisor, began framing part-time for SBC and knew from seeing their quality work that there wasn’t any reason to leave after graduation. Seventeen years later, his knowledge of the building trades and systems in a home enable him to interact with all subs and understand crucial intricacies for success. As far as personal investment, he says, “If you don’t want these projects – or anything for that matter – to succeed, then they will fail.”

And it’s always about trust. The unspoken kind between you and the cut man who knows exactly what you need next. Ryan Mann, Project Supervisor, and 15 years with SBC, recalls that the first project he managed was quite a challenge – a brutal winter and an unforgiving build site in Moonlight Basin at 8,000’ with little access on the side of a mountain where the road basically ended at the garage. He credits his lead guys with getting him through it. He knew they had his back.

“I was brought up to work hard for something you want. There is a pride of craftsmanship within our team that goes into each of our projects.” 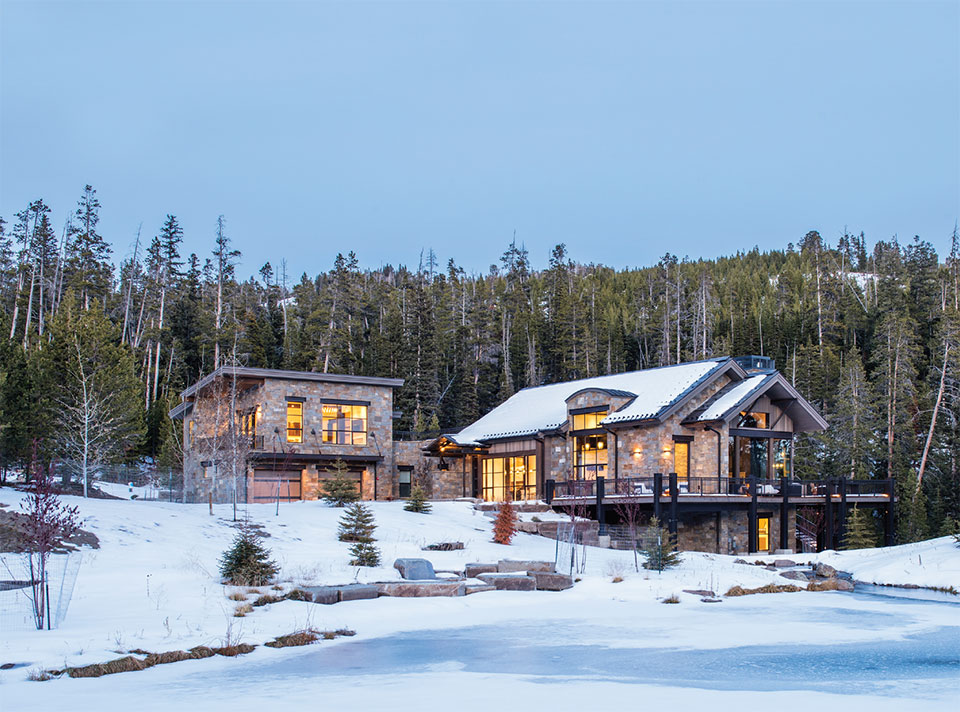 “I never imagined I could be working for such a great company building someone’s dream home,”

And it’s always a little bit of fun. They all enjoy what they do and each other, even simply teaching and sharing knowledge, seeing others succeed, meeting a deadline, and a fair share of pranks and competitions – details classified – that may or may not have involved scaling Glu-lams. Camaraderie keeps morale as high and hardy as the altitude of the harsh environment they work in – tough on workers, tools, and equipment. Yet even simple acknowledgement from a client has an enormous impact on team morale with something as small as bringing lunch out one day to the entire crew, something not spiced with the usual sawdust. The fringe benefits are large too; arriving at the jobsite of an early fall morning, greeted with the beautiful, eerie wail of a bull elk echoing across the mountainside before it appears later in front of the window where you’re working, the perk of -5 degrees up on the mountain instead of -12 down under the valley inversion, or merely when the company reaches out to help with life’s unfortunate circumstances.

“I have never worked for a company that takes care of their employees like they do,” says Ariana Vinson, Office Manager of 17 years. It’s her strong motivation to be a positive team member and give 100% every day. Her favorite perk – solid friendships. Jon Muckey, Warranty Supervisor, agrees. “I can’t outgive my employers,” he says. Muckey began with SBC six and a half years ago as a journeyman and did whatever it took to get the job done right. “I analyze and scrutinize intensely from a broad point of view, thinking outside the box for solutions to problems. Nothing is impossible, nothing is “good enough,” he says. That says it all.

“Obviously there is a sense of pride at the thought of how many hands came together to make it happen, from the design phase to the landscaping. We are all just a small piece of the puzzle.” 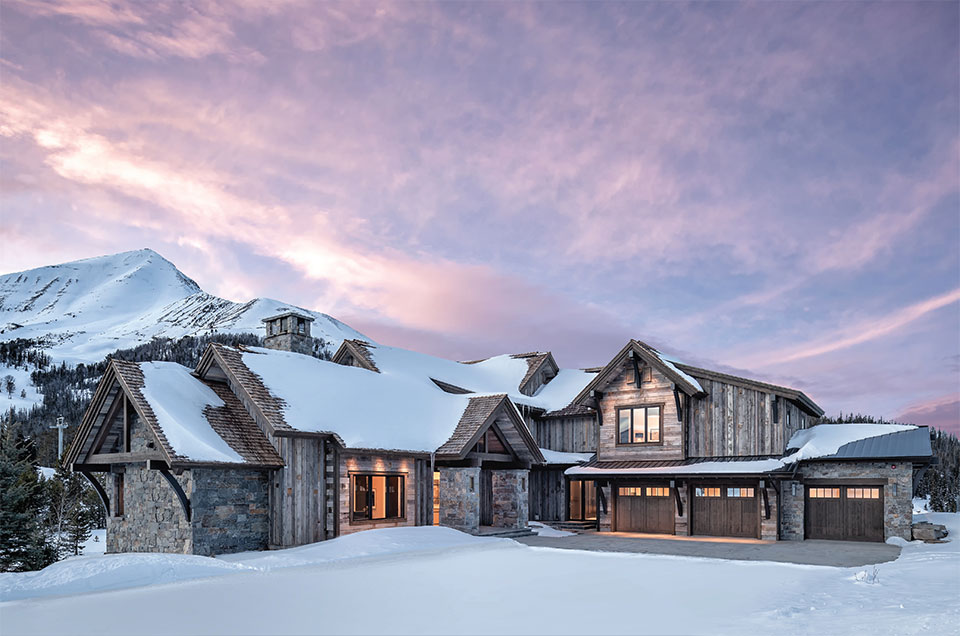 Nathan “the Surgeon” Kruger, Project Foreman, (he’s steady with a Sawzall) was a framer when he found his way to SBC by word of mouth from other employees who had proudly showed him photos of the work they had done. “I never imagined I could be working for such a great company building someone’s dream home,” he says.

As each project is completed, a palpable sense of pride and gratitude echoes throughout the company. When the job trailers are loaded for the last time, it’s an emotional, humbling feeling. Team members often reflect on the past year, maybe two, that they have just spent on the process with all its challenges and cameraderie directed at one common goal, to build exceptional custom dream homes. “Obviously there is a sense of pride at the thought of how many hands came together to make it happen, from the design phase to the landscaping,” says Mann. “We are all just a small piece of the puzzle.” And as Tucker adds, “There’s a sense of gratitude knowing we’ve given our best to deliver the best.”

“There’s a sense of gratitude knowing we’ve given our best to deliver the best.”