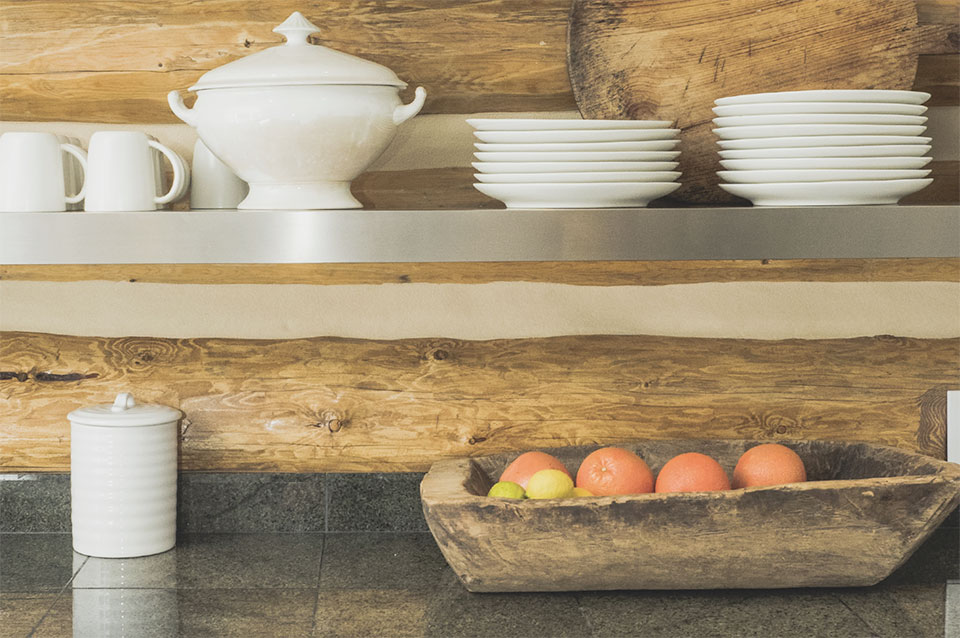 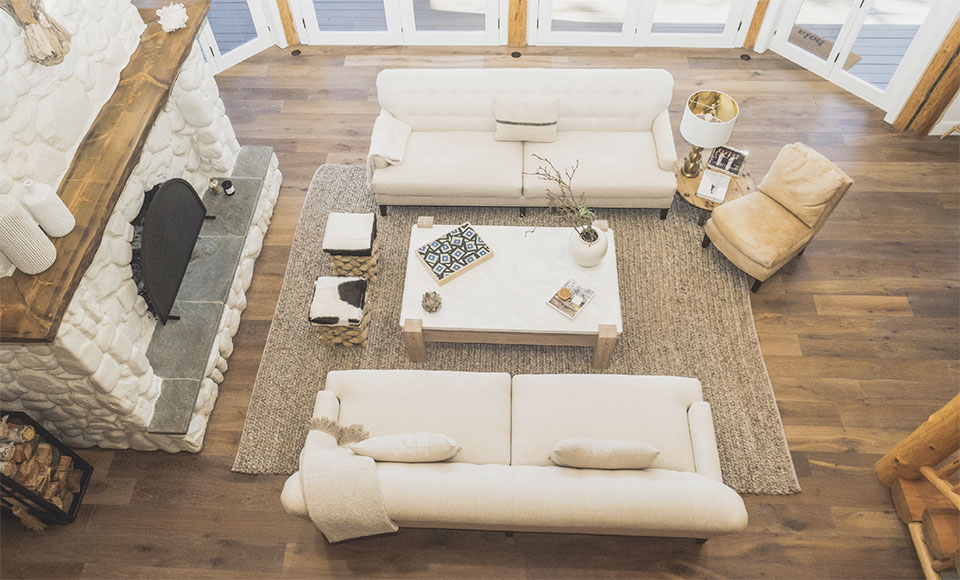 When a Los Angeles-based couple fell in love with a vacation home on Whitefish Lake, they immediately had a vision for its potential and a short timeframe to make it happen. Just weeks after closing on their house in late November of 2018, the couple hired Wood Roots Construction, owned by Boon Schmieder and Wilson Mattingly, to help them elevate their new home in time for the upcoming summer.

“And as we began our working relationship, the project just kept growing and the scope expanded. Ultimately, we ended up doing twice as much as we planned, and I’m proud to say, we were still able to hit the March deadline.”
–Boon Schmieder, Owner, Wood Roots Construction

Although Wood Roots Construction was still in its first year of operation, the couple says they instantly knew the two experienced and enthusiastic builders were the right fit for the job. Having professional experience in building and development, the homeowners were impressed with Boon’s and Wilson’s responsiveness and sound budgeting. They knew that Wood Roots Construction had a good plan backed by diligent communication and the energy to push and meet the aggressive deadline. 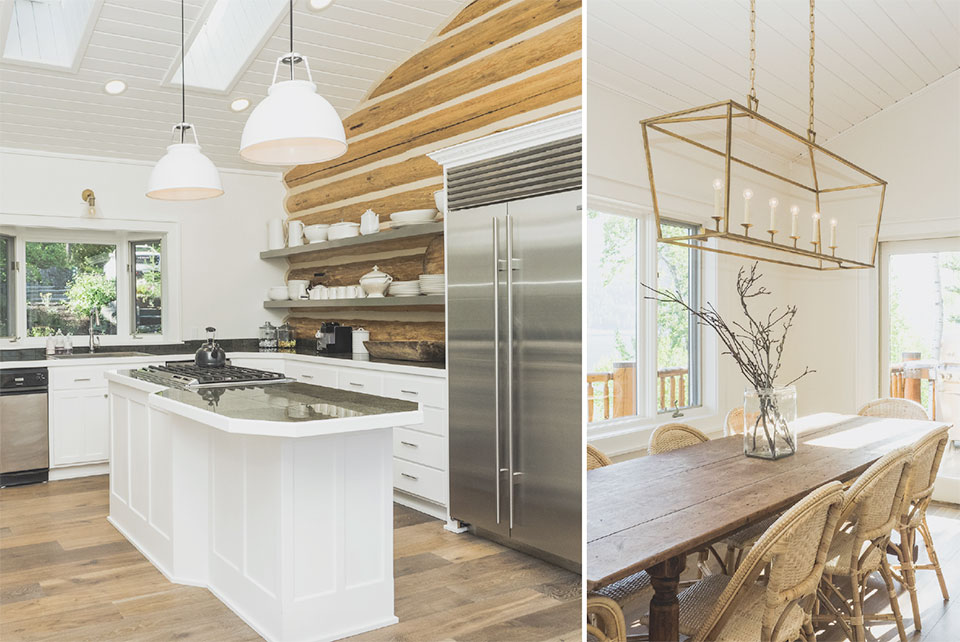 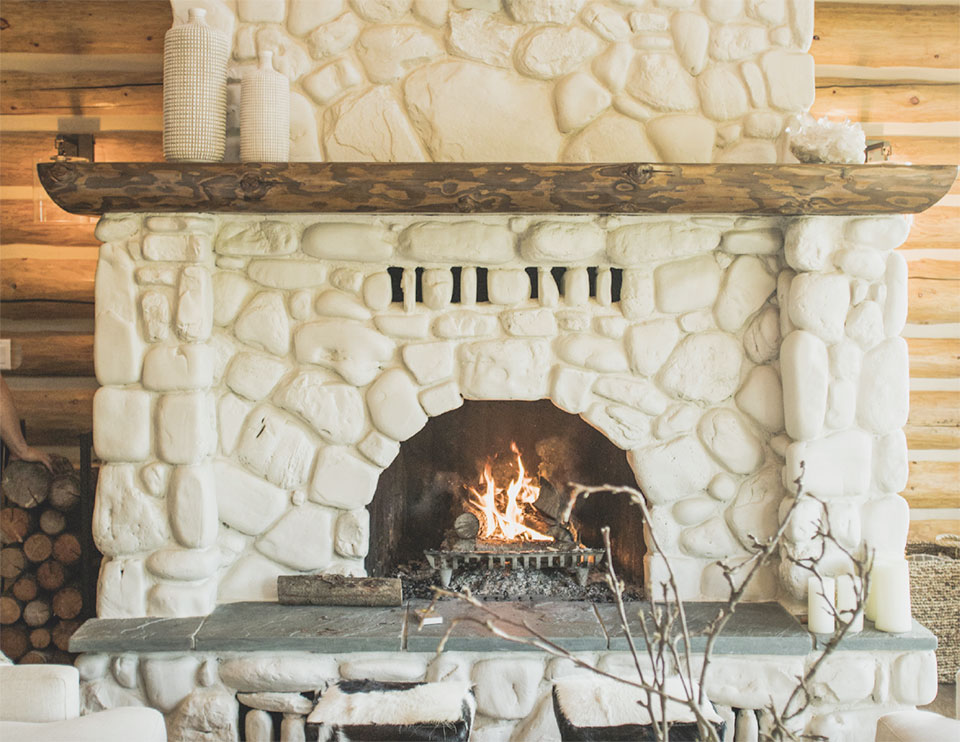 “The couple came to us with some solid ideas about what they wanted to do with the home and a tight timeline,” says Boon. “And as we began our working relationship, the project just kept growing and the scope expanded. Ultimately, we ended up doing twice as much as we planned, and I’m proud to say, we were still able to hit the March deadline.”

A major theme of the renovation was light—what can be done to brighten and lighten a log cabin-style home, originally built in the ‘90s? The team at Wood Roots Construction and the homeowners worked together and found ways to transform all of the spaces in the home into the airy environment they were envisioning for their lakeside getaway.

“Painting was a massive portion of the scope of work for this renovation,” says Boon. “Almost every corner of the house was painted—ceilings, walls, trim, wood paneling.” Transforming dark walls and trim to serene shades of white, with the help of subcontractor Hagestad Painting, opened up many of the spaces that had previously felt cramped. One of the most drastic paint-driven changes came when the homeowners decided to give the home’s two river rock fireplaces a new look.

“The kitchen was a great challenge. We Tried to make the new remodel flow with the original seamlessly. And the log work is especially tricky.”
––Wilson Mattingly, Owner, Wood Roots Construction

“The homeowners were great about bringing ideas to us and collaborating on solutions,” says Boon. They didn’t like the fireplaces, but there wasn’t enough time to rip them out. So they introduced us to a brand of limewash paint from L.A. called Portola Paints that we had never used before. And ultimately, I think the fireplaces are really beautiful, standout features now.” 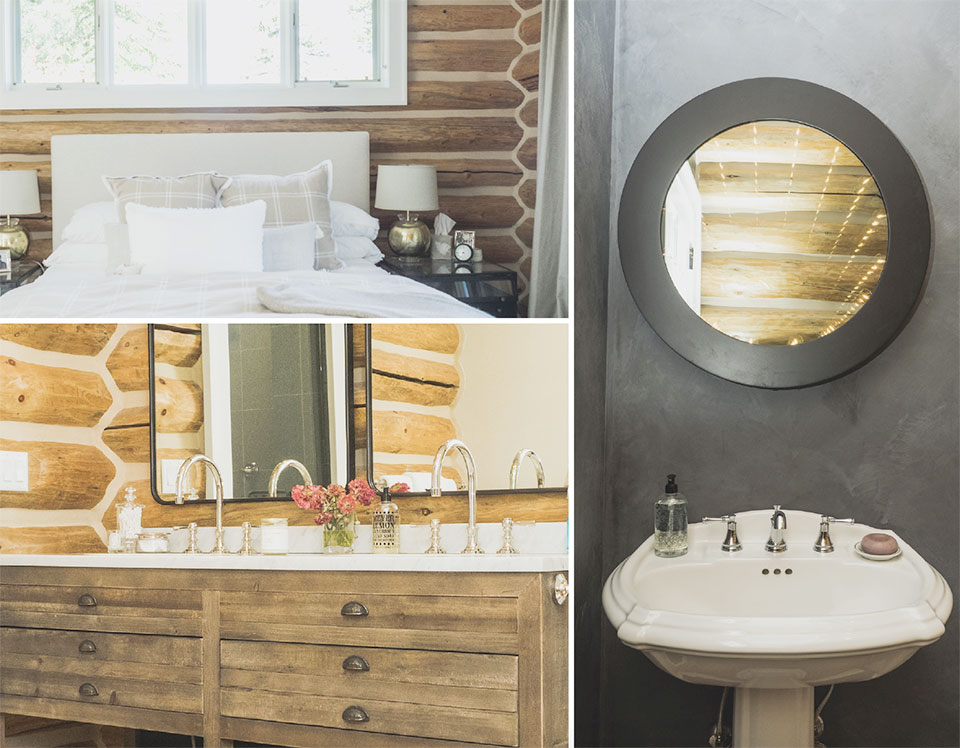 Flooring was another area that needed to be addressed throughout the home. From carpeted bedrooms to tiled bathrooms and dark cherry floors—all of the flooring was replaced with rich, engineered oak that added a sophistication and consistent openness.

The kitchen also underwent a major facelift. Upper cabinets were removed and replaced with stainless steel shelves that gave a sense of breathing room. They also cut the original backsplash down and reinstalled a smaller version. “The kitchen was a great challenge,” says Wilson. “We tried to make the new remodel flow with the original seamlessly. And the log work is especially tricky. You want to patch in new logs in such a way that an average person would not be able to notice there was a modification made.” Wood Roots Construction worked with the same contractor who originally chinked the logs, on a process of filling in the gaps between logs with flexible material in the home when it was first built more than 25 years prior.

The other room that both Wood Roots Construction and the homeowners agreed presented a big challenge was the master bathroom. In order to achieve the updated, resort-like feel the homeowners wanted, Wood Roots Construction removed the sunken bathtub, tore out built-in cabinets, and added double sinks, an antique vanity, and a new commode. “The master bath was technically difficult because we were removing cabinets that were installed into original logs. We also had to find creative, natural-looking ways to hide wiring—all while maintaining a sense of open space,” says Wilson.

Executing such a large project on such a short timeline can have its challenging moments, especially in the dead of winter. To keep warm, tenting was necessary while refinishing doors and windows, and occasionally a team member would fall victim to the dangers of an icy road, but overall Wood Roots Construction was prepared and pushed through any wintery setbacks. 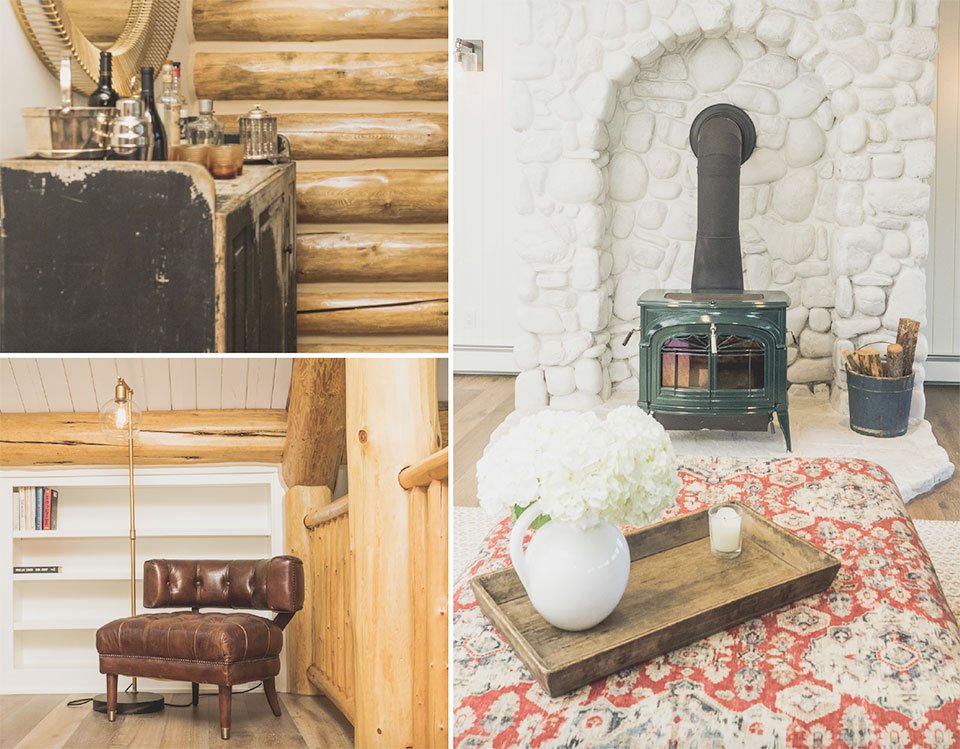 To keep the project on time, Wood Roots Construction and the homeowners stayed in constant contact despite the lack of cell service at the lake house. Even with the homeowners more than a thousand miles away from the job, communication couldn’t have been smoother, according to both sides.

“The master bath was technically difficult because we were removing cabinets that were installed into original logs.”
–Boon Schmieder, Owner, Wood Roots Construction

The team used online tools such as Dropbox to easily share photos with mark-ups and questions. For each of the four onsite visits the homeowners made, they were happily met with organized punch lists and daily agendas to maximize their time. And through shared Pinterest boards, magazine cut-outs, and countless conversations, by the end of the project the homeowners felt that Boon and Wilson came to have a strong understanding of their exact needs.

Having such stellar communication allowed the team to address all of the original needs and then some—adding a whole bedroom and full bathroom to the garage in just the last month of the project. In addition, every existing bathroom and closet in the house was upgraded, all new hardware was installed, and a brand-new front door was hung to welcome guests. And to perfect the lighting, every fixture—chandelier, sconce, can—was redone or replaced.

“When we first walked in, it was a classic Montana ‘90s log home all the way down to the grizzly bear toilet paper holders,” says Boon. “When you walk in now, it’s so much more fresh and open. I think we were able to really create a special mix of modern lake house and rustic log home. It’s a delicate balance, but it works really well.” 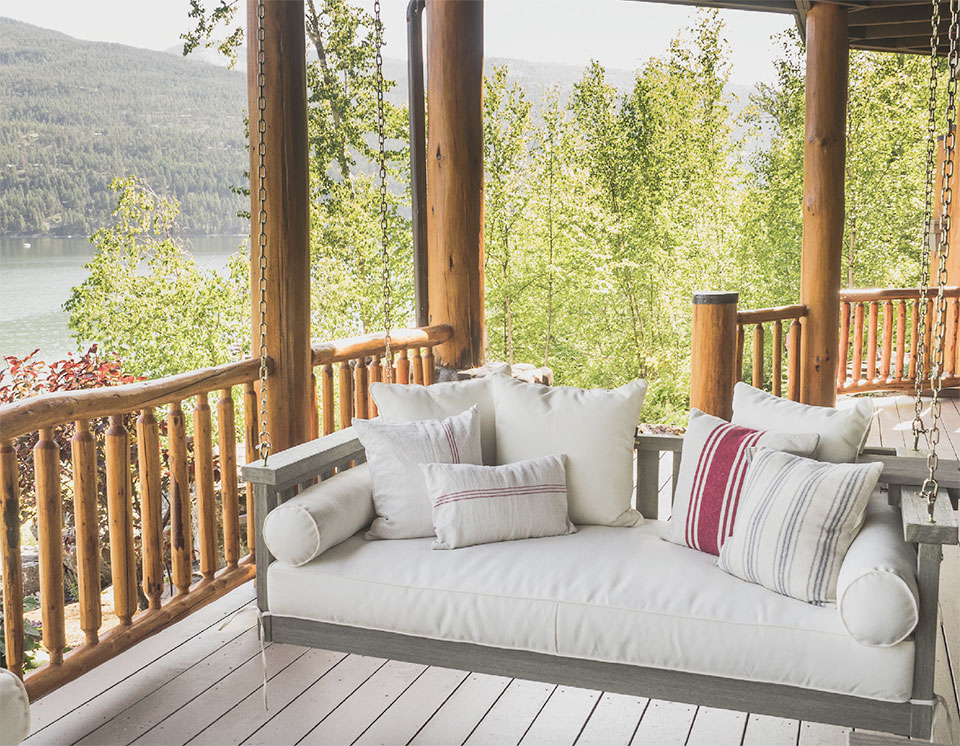