Art customized for the Home and Soul Partner Website 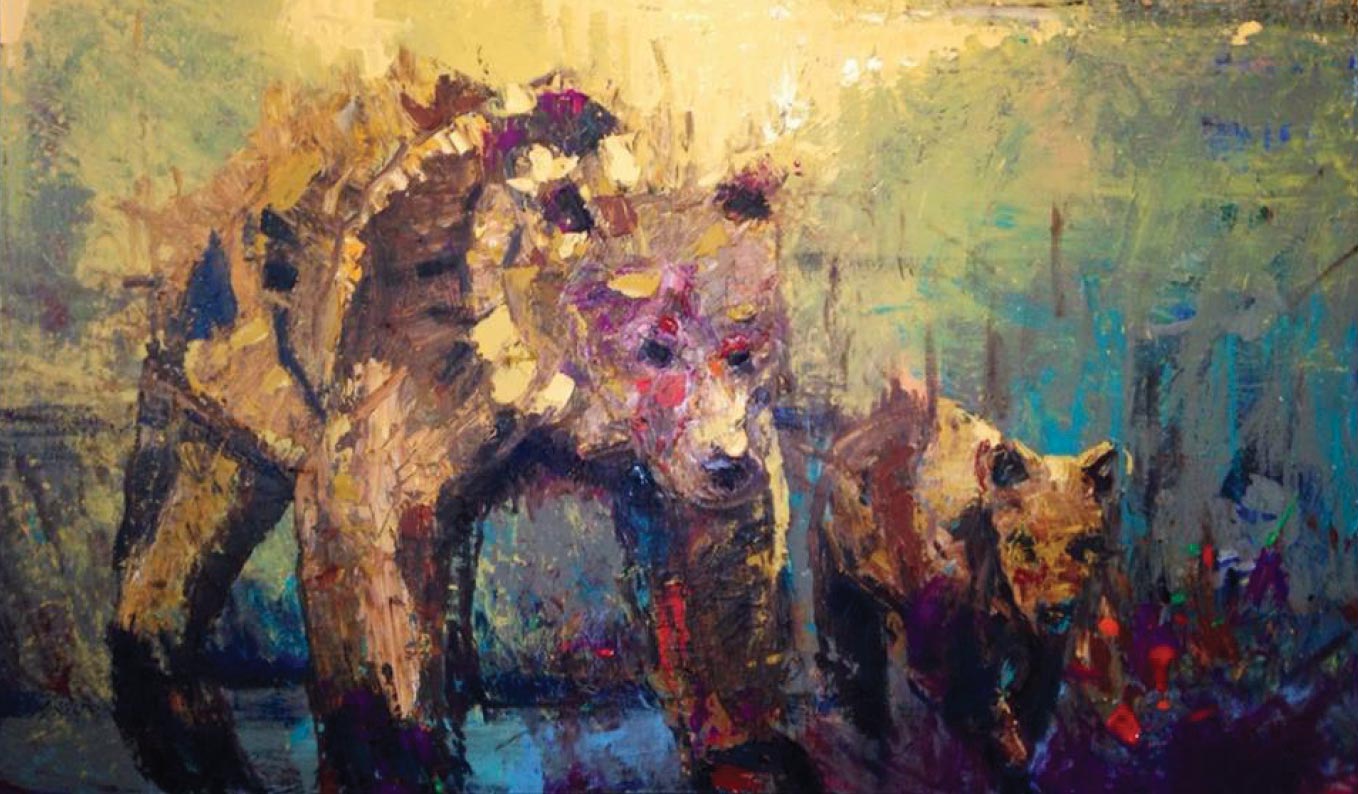 The Process of Kira Fercho

For Kira Fercho, the painting process doesn’t begin with a blank canvas but rather with an open mind. The process is interpersonal and cerebral before it is artistic and physical.

Prior to the initial work of art creation, Kira develops a personal relationship with the future viewer who is often a homeowner, but may also be an interior designer, builder, architect, or, as in the case with her corporate clients, a board or foundation member. Once Kira has had some free-flowing conversations and viewed the space, she formulates a vision of a painting in that context, an artwork that will spark the personal passions of the viewer.

She then identifies the problem to be solved—a space in a home with a void; a client with a particular color affinity or idea needing to be expressed; or a communal environment that needs its occupants to be represented and spoken to through art. Before picking up a brush, Kira has formulated a structure, mixed a color scheme, and visualized the end experience.

As paint is applied to canvas, the vision evolves as the piece evolves and doesn’t always end where Kira expects. She says, “Loren Entz, a cowboy artist from Billings, taught me how to find my voice. Part of the process is stumbling through things. When I was having trouble making a decision… and eventually we all have to make decisions… he said, ‘Just do it. Move forward even when it gets difficult. At times it is better to make huge mistakes than have small victories.’”

While the subject matter, composition, and color palette varies from painting to painting, Kira generally works in oils and uses an impasto style of application. Using brushes and painting knives, thick layers create a three-dimensional effect. Kira explains, “How a painting looks at noon is completely different than how it looks at night. During the day you notice the subtleties but during the night the drama comes alive.”

When someone designs a custom home, they envision a structure that not only reflects their personality and lifestyle but also must be well-constructed to stand the test of time. When they commission a painting, quality and longevity are also important. As Kira says, “After someone takes that much time and effort to design and build a home, my paintings must stand up around it and accentuate what architects, designers, and builders had in mind. It must be as well-built and well-conceived as the walls around it.” 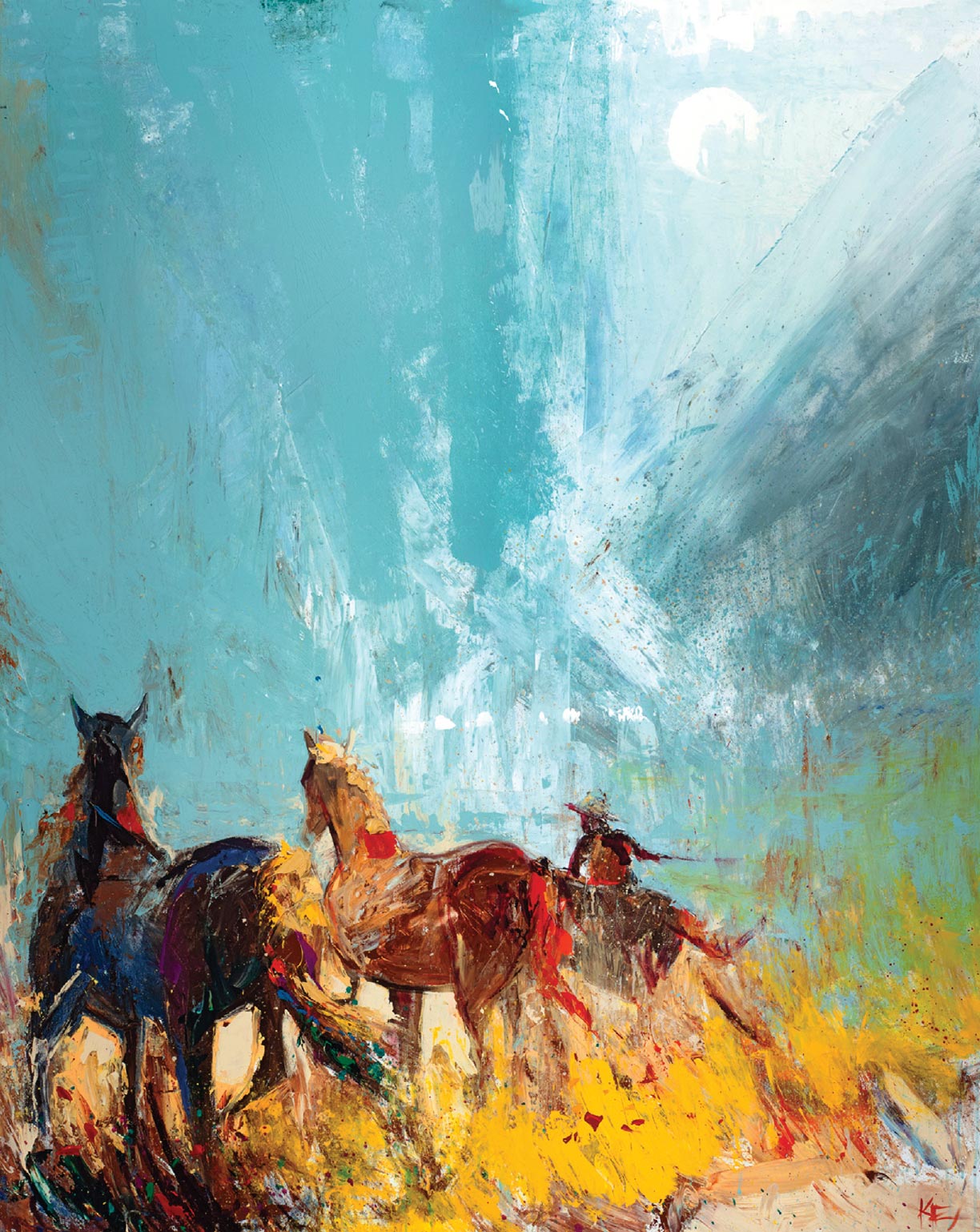 Over 100 years ago, C. M. Russell’s paintings captured the High Plains landscapes with their plateaus, rivers, sweeping prairies, colorful vistas, native animals, and scattered peoples. A native of eastern Montana, Kira too is enthralled with the High Plains. She says, “Everyone loves the mountains of the West, but not everyone gets to really experience and appreciate the prairies and badlands. From my perspective, as someone who grew up in this environment, the High Plains have equal grandeur and dramatic beauty and maybe even more gradation in color—so much material to work with.”

In Riders Kira creates a scene where the sky dominates and the riders merely skim the surface. She uses an Impressionist style to create a sense of movement as the horses and riders trot across the prairie. In this 5’ by 4’ painting, the sky stretches from the viewer’s feet, over the head, and up into the sun. The result is an experience of 180 degrees of sky… a feeling intimately known by this “Big Sky” artist.

Kira called her oldest daughter Giavanna “baby bear” when she was a little girl. Eventually, “baby bear” outgrew her diminutive nickname. As a mother, Kira had to recognize life’s journey and how baby steps soon lead to major milestones. She says, “As a licensed therapist, I always say the hardest child to raise is your own. In the painting, the bears are myself and my daughter. The bear is our totem animal. The scene captures one moment in my daughter’s journey from infancy to childhood to adolescence to adulthood.”

In January of 2013, Jim Duncan of the Billings Clinic Foundation approached Kira to do an installation in their new atrium. After measuring the space and discussing the Foundation’s desired use of the common area, Kira formulated a vision: twelve tipis, often called lodges, that represent the twelve tribes associated with Montana. Kira says, “Like the Russian Impressionists before me, I wanted to honor the people, the land, and the culture in which we, as Montanans, live.”

While the vision was in place, the funding wasn’t initially secured. Serendipitously, six months later, Kira was having lunch with Harold and Pat Korell, who were so enthralled with the vision that they spearheaded the fundraising campaign. Harold says of the process, “Putting people together with people to do good things is one of my passions. The Billings Clinic is a key provider of healthcare for such a diverse and widespread population from the area of my youth. This project provided an opportunity to celebrate a young talent, help make a beautiful new facility a welcoming place, and recognize the Native American culture.”

Before beginning any of the twelve paintings, Kira did extensive research. Each lodge had to be researched individually as every tribe has different traditions, histories, geographic locations, cosmic views, and symbol systems. Kira read books, drove all over the state, and visited tribal members who gave her insight.

She strived to capture the landscapes, traditions, and symbols that represent each tribe as a whole. The final work could never be “perfect” but at a certain point Kira just had to make decisions and move forward. When she turned over her notes to the Billings Clinic she said, “Please understand that this is a project that could have taken my entire life.” Fortunately for us and the patients, family members, and professionals at the Billings Clinic, it didn’t. 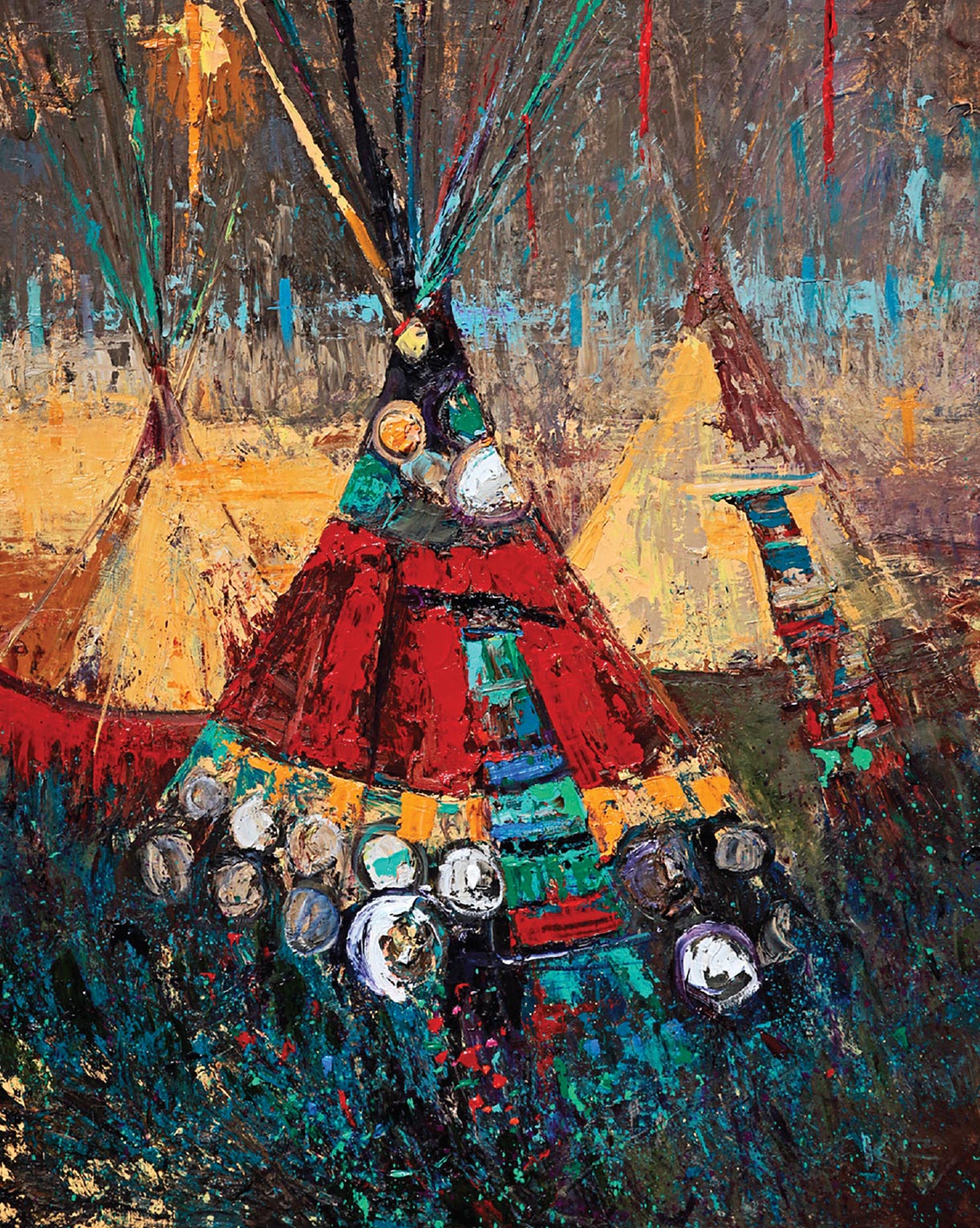 Inspired by contemporary Blackfeet design, the center tipi dominates the painting. From the grasses on the ground to top of the tipi poles in the sky, the angles are vertical and straight. Contrasting with the linear elements are large white circles at the base of the lodge. “The circles represent the children of the tribe. Every tribal member’s job is to protect the young ones and raise them. The lodge, like each member of the tribe, protects the most vulnerable,” Kira explains.

In 2018, Kira Fercho and her work can be found at the following shows and locations: