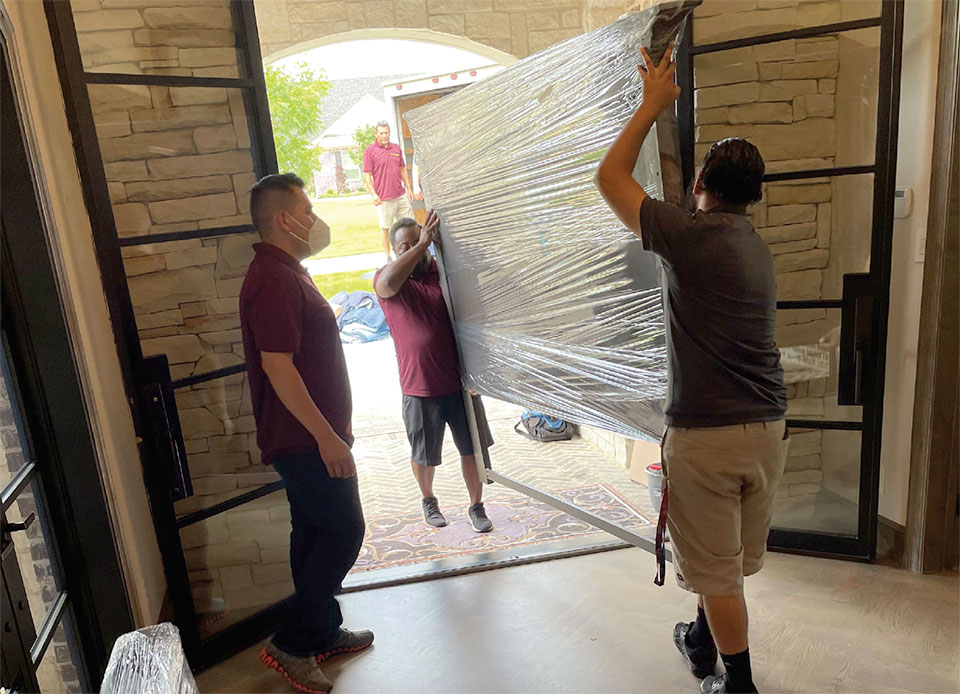 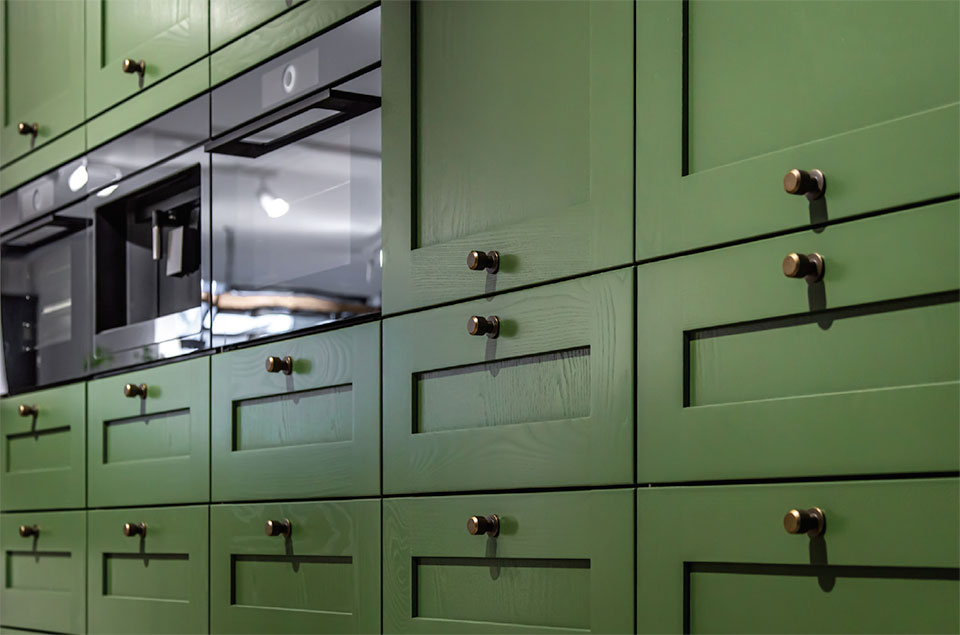 At their purest level, relationships involve taking care of one another. Nilda Ruiz prioritizes relationships in all aspects of her life. Nilda is the founder of IDSDEL (IDS), a premium concierge service handling estate and fine furniture installation, delivery, and storage. Nilda’s relationships with her family, employees, trade partners, and neighbors are the heartbeat of IDS’ operations.

IDS makes it easy for designers to have the items they have carefully selected received, inspected, and assembled in their clients’ homes. The company’s expertise alleviates stress and frees up time for designers to do more designing. Their invoicing is explanatory and project-based. With offices in Dallas, Texas, and Kalispell, Montana, IDS offers a level of service that is changing the game for designers. The company has gotten inside the minds of designers and figured out exactly what they need for success.

IDS visualizes and understands the obstacles designers face, as well as their processes. Nilda’s leadership and knowledge comes from spending years learning the inner workings at an interior design firm in Texas. She began as an office assistant, and ultimately created a custom database that managed millions of dollars of orders for the office. “I like processes and putting things in order,” she says. “After I started managing the firm’s financials, I realized that so many issues arose from a lack of communication between the designer and the warehouse. There was no way to track whether something arrived correctly or if it was damaged.” An expert at operations and making things happen, Nilda recruited her husband, Ian, to begin receiving, and IDS was born. 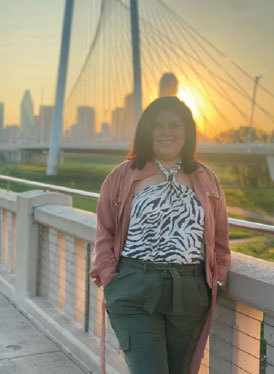 “To me, it’s about finding a solution and getting it done.”
–Nilda Ruiz, Founder, IDSDEL

Being hardworking and perseverant are two core values that come to mind when thinking about what it means to be a Montanan. Nilda embodies those values and has put together a team that operates with the same conviction. When the warehouse called to say there was a dining table that was not going to fit in a regular box truck and that it required a flatbed with 15 guys, Nilda thought, “No big deal.” While needing a flatbed truck and 15 workers to receive a table might create a level of anxiety for designers trying to bring their clients’ visions to life, Nilda rises to the challenge. “To me, it’s about finding a solution and getting it done,” she shares. As Warehouse Manager, Ian balances the high energy of IDS’ growth with love and patience. Nilda says, “He is a father first, and his love and patience is the calmness of any storm.” 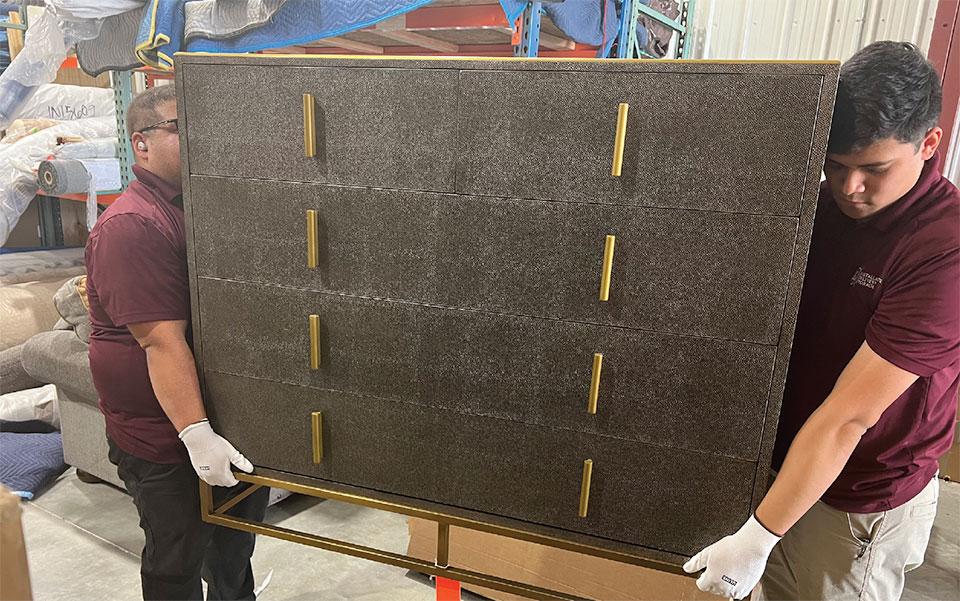 IDS launched a new service in Montana of receiving cabinets for designers. The company now works with four cabinet makers who send finished custom cabinets to IDS to hold until they’re ready to be installed. IDS inventories them, stores them, and then delivers them to the job site when that particular home is ready. “There weren’t many places to store cabinets here, and the trade needed this service,” Nilda says. IDS’ business is 90% trade and 10% designers’ clients.

Protecting clients’ possessions is extremely important to IDS. They partner with the trade to coordinate scheduling so that the items in their purview are delivered safely. “It is all about protecting the client,” Nilda explains. She has given countless warehouses specific handling instructions such as, “Don’t stick a forklift through this box!” The team at IDS is in close contact with the truck lines and they have constant communication to ensure safe delivery. They are true partners and help designers bring the best to their clients.

“I like processes and putting things in order.”
–Nilda Ruiz, Founder, IDSDEL

One time, Nilda tracked down a truckload of 100 pieces of furniture on an 18-wheeler that had been stolen. Due to the nature of how freight product is transported throughout the country, bills of lading are frequently sold and deliveries are grouped by trucking companies to reduce costs. The bill of lading was sold three times, and the last driver stole it. They found the truck a month later in Ohio and learned that the driver had been trying to sell the furniture out of his basement. IDS photographed and videoed everything and inventoried what remained. “Crime scenes are outside of our norm, but we carefully documented everything,” Nilda recalls. “We were the designer’s eyes, and they trusted that we would give them 100% of the information they needed regarding what was left. They relied on us to convey the details, and we made an unfortunate event into a much smoother process.”

IDS’ routine service relies on good communication and problem-solving. When they first began working in Montana, their trade partners were not accustomed to this level of service. “Designers here were used to receiving a box and assembling a barstool themselves,” Nilda says. While that was a very Montana way to get things done, once they were exposed to IDS’ level of service, they realized they could shift their time to better serve their clients.

“They’d see that we assembled a bed in 30 minutes and had pictures of all of the pieces, and they realized they could focus on selling more and moving product to their clients more efficiently,” she adds. In terms of the ease of using their service, Nilda warmly shares a story of a designer who called her to thank her for her invoice because it was organized in a way that the designer could automatically integrate into her project billing. It’s not every day that people thank a business for sending an invoice, but it was an example of how IDS makes designers’ lives easier. 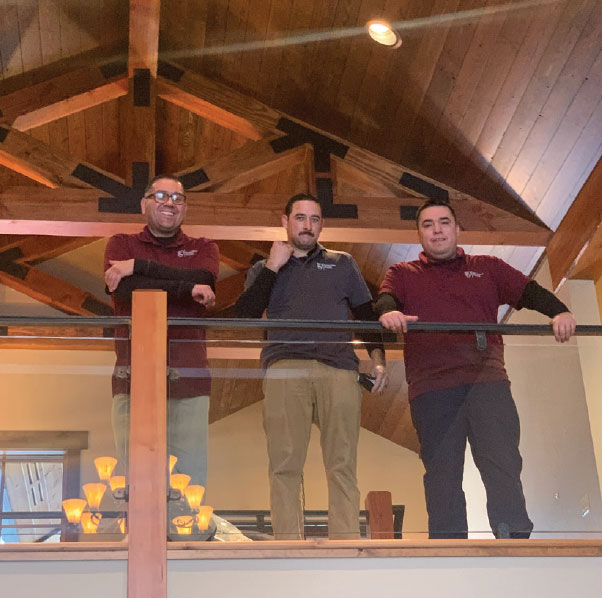 “There weren’t many places to store cabinets here, and the trade needed this service.”
–Nilda Ruiz, Founder, IDSDEL

Taking Care of Their Loved Ones

After realizing that a housing crisis was precluding would-be workers from being able to live in the Flathead Valley, IDS purchased employee housing in Kalispell and Columbia Falls. “Our workers are the bloodline of our company and it was very important to me to have them here,” says Nilda. She wanted to alleviate the stress of where local workers would live as well as the affordability aspect of it. “Montana is a beautiful state,” she says. “It’s absolutely gorgeous, but our employees had no place to live here. Having solved the housing piece in their mind means they don’t look at this as just a job. IDS may have started in Texas, but Montana has become our home too. Being able to give that to our employees is a blessing.”

Creating trust in relationships comes from forming connections, and IDS actively nurtures those relationships. Nilda loves to get together for lunch or cocktails with clients and get to know each other. Recently, she enlisted the culinary support of her sister to form a bond with a neighbor who was less than thrilled about the increased traffic that IDS’ warehouse created around his home. “He was extremely frustrated and it was understandable since he’d lived there before the neighborhood had been developed,” Nilda says. She explained that the truck drivers were independent and didn’t work for IDS – so she couldn’t actually control their behavior – but she knew she had to come up with a better solution. 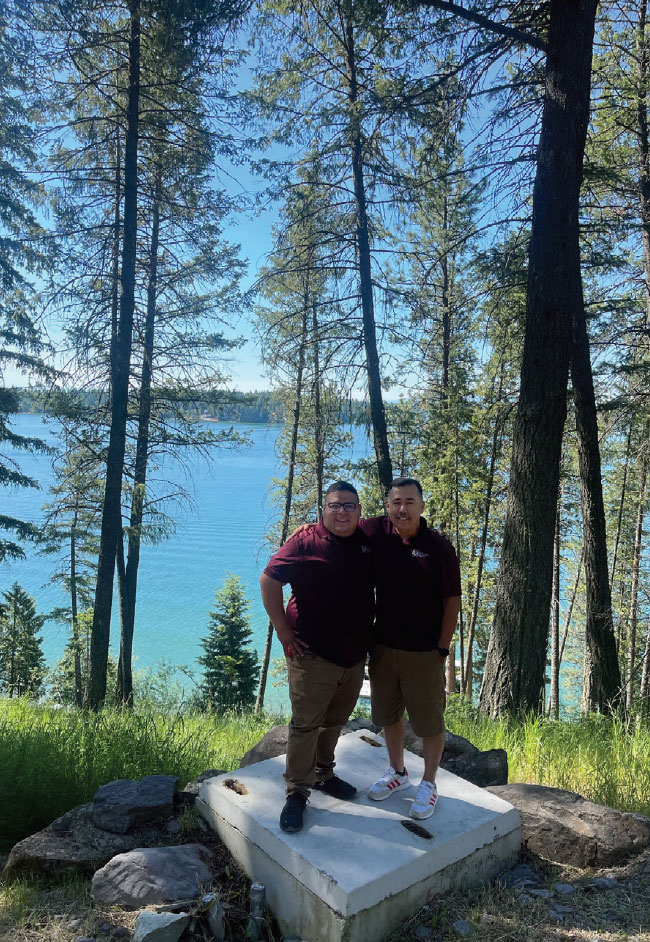 “I talked to him a few times and finally asked, ‘Do you like Spanish food?’ He said he did but that there wasn’t anything authentic around,” she recalls. Nilda wanted to acknowledge the disruption their commercial traffic had caused at his home. As a peace offering, she asked her sister to cook a big batch of guacamole and homemade Tex-Mex food. It won him over. “Now he’s our best friend,” she laughs graciously. “It’s about being able to talk as a team, face obstacles, and make them approachable so we can solve them before they balloon into something much larger.”

Enlisting her family’s support is second-nature for Nilda. Her three sons grew up in the industry and now work for IDS. Her eldest son Daniel is passionate about accounting and now manages the company’s finances with Nilda’s guidance. Her middle child, Ivan, is a programmer who has become an invaluable IT resource for the company. He created the custom warehouse database that Nilda explains “does exactly what an interior designer needs and wants.” Her youngest son Nathan is the Warehouse Overseer who works closely with Ian to ensure that product is received in the warehouse. As their skill sets and interests emerged, Nilda asked them if they wanted to be involved in the business, and they said yes.

“Our workers are the bloodline of our company
–Nilda Ruiz, Founder, IDSDEL

IDS is truly a family business. “Having a solid foundation of supportive parents and awesome sisters guiding me is priceless,” Nilda says. She acknowledges the balance she needs to strike between dealing with challenges at work and also being mom. “Everyone here is valuable and equal because everyone helps turn the wheel for us,” Nilda says. “The only difference is that when I go home, I see them.”

Home is meant to be enjoyed, and Nilda finds that joy in Montana. She is grateful that IDS’ warehouse has been busy in Montana, and acknowledges the trust that designers have placed in them to take care of the most valuable things that complete a home. “Being part of the process, especially because we’re still relatively new to the community, is a blessing for which we are extremely grateful,” she says.

As someone always on the go, Nilda loves the calmness and serenity of Montana. “The environment reminds you to slow down and enjoy life,” she says. “This is what creating a home is about. You want to enjoy it.” 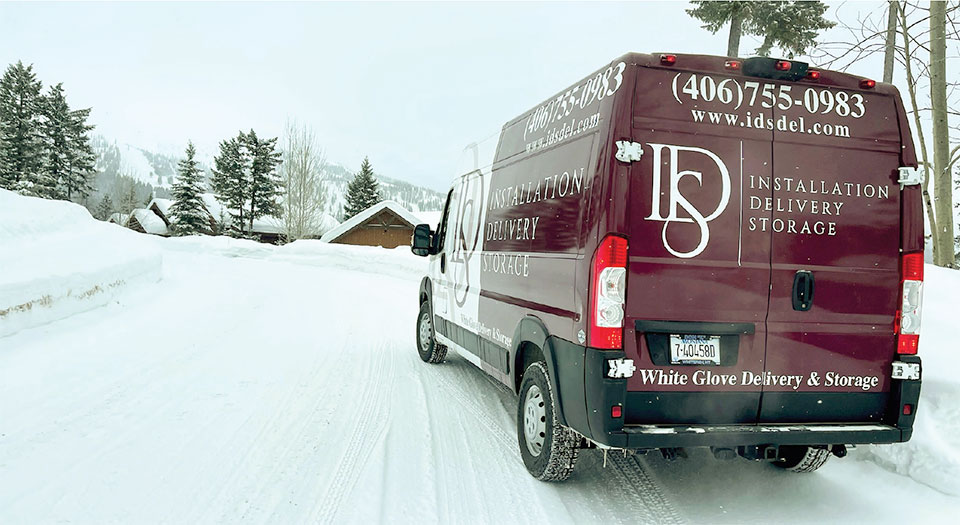