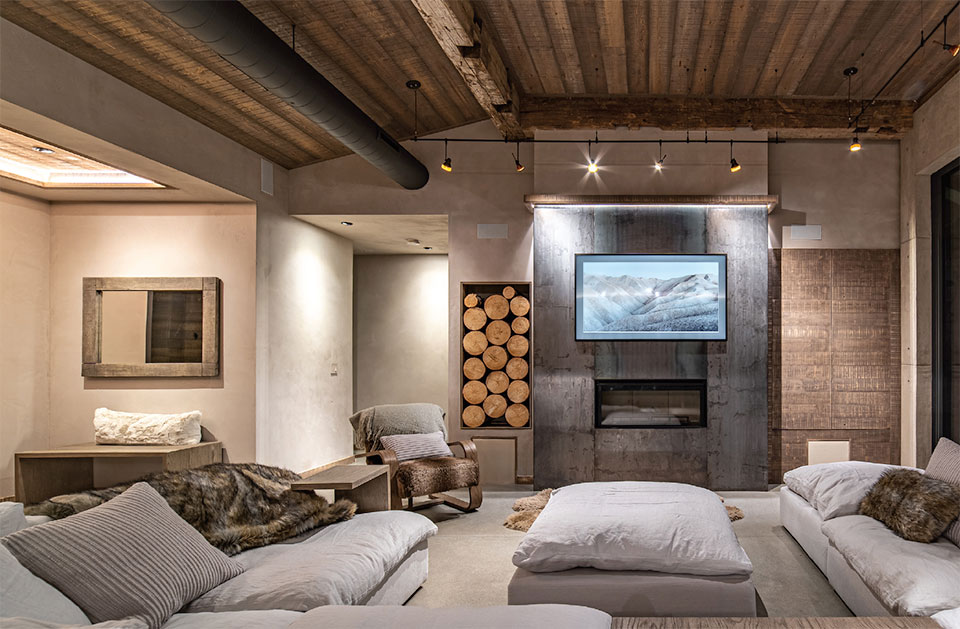 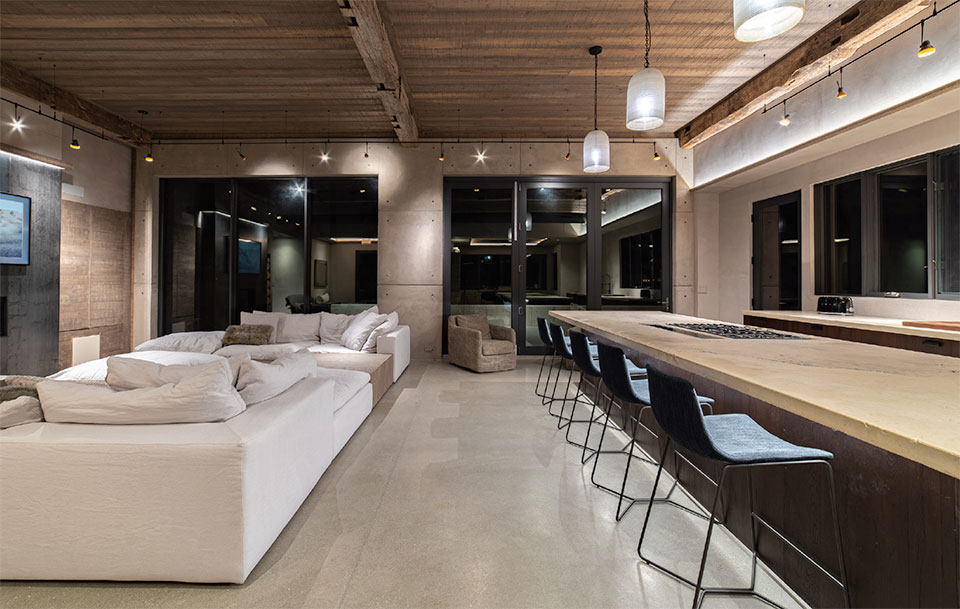 Architectural concrete is a key ingredient in timeless design. Rome’s Colosseum was built nearly 2,000 years ago, using concrete. Gaudí’s Sagrada Família in Barcelona is a 150-year-long construction project that is being completed using reinforced concrete. While concrete might invoke feelings of cold and sterile modern houses, Whitefish-based nuWest Builders designs warm and inviting homes, unlike the traditional Montana log cabin aesthetic. nuWest’s homes have a distinctly European feel, which makes sense since concrete has been used in plaster in European homes for hundreds of years.

Eric Payne is the founder and owner of nuWest Builders. Concrete is one of the primary elements and driving forces in his work. The material provides excellent insulation and is durable. Incorporating concrete into his projects is how Payne creates timeless homes that remain relevant beyond the latest trends.

nuWest’s builds take inspiration from global design. The kitchens, sight lines, and finishes bring a depth of visual interest and innovation unlike most design perspectives typically seen in Montana. A mixture of hard and soft finishes is appealing and inviting. Concrete is juxtaposed with wood. Wood is contrasted against brick or stone. Together, these elements create depth and interest. 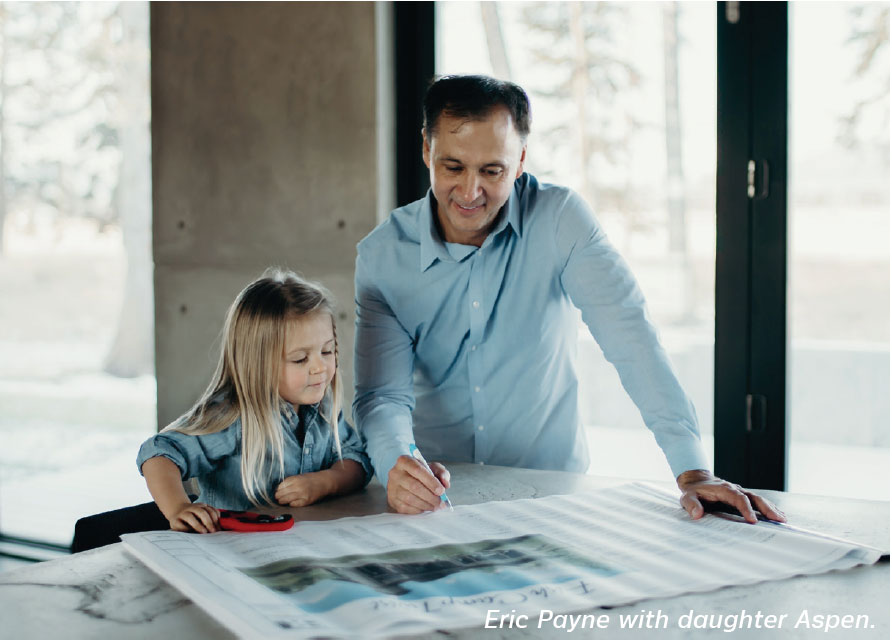 “We’re always trying to be a little different, so our designs are a little more timeless, but also modern. Our goal is that 20 years from now, when people see one of our houses, they’re still in awe.”
–Eric Payne, nuWest Builders

nuWest’s process begins with matching the client to the right architect. Payne says, “We like to be involved in every step of the process. From the start with the planning and design stages, we help steer our clients to the architect who will be the best fit for each project. We don’t just come in and build the architect’s plans. We like it to be our plan too. We work with extremely graphical 3D rendered concepts so we know that the plans fit our client and we’re all on the same page before we get into more detailed planning. We cut the design process in half because we’re always communicating.”

Payne adds, “We’re always trying to be a little different, so our designs are a little more timeless, but also modern. Our goal is that 20 years from now, when people see one of our houses, they’re still in awe. Our clients are always in love with their final plan, because they’ve been in love with the process every step of the way.”

nuWest’s homes have features like reclaimed wood, statement walls, and steel accents. Often, timbers are used, resulting in unique contours that change sight lines and create an intimate feeling. Glass contrasts with concrete for a unique experience that challenges traditional boundaries and makes us question where the inside of the room ends and where the outside experience begins.

The exteriors of nuWest’s homes are equally as beautiful as the interiors. Payne loves creating epic outdoor spaces. His goal is to make the outside look as spectacular as the inside.

The most recent project that illustrates Payne’s design vision is a 3,000-square-foot European-style ranch house on Trumbull Creek in the Flathead that became his personal project. The concrete and glass home sits on 75 acres and is oriented so that it faces Big Mountain, also known as Whitefish Mountain Resort. The property also has a barn and riding arena.

“I wanted it to feel like an old ranch house that was cozy and warm, but also I wanted it to still be grand.”
–Eric Payne, nuWest Builders 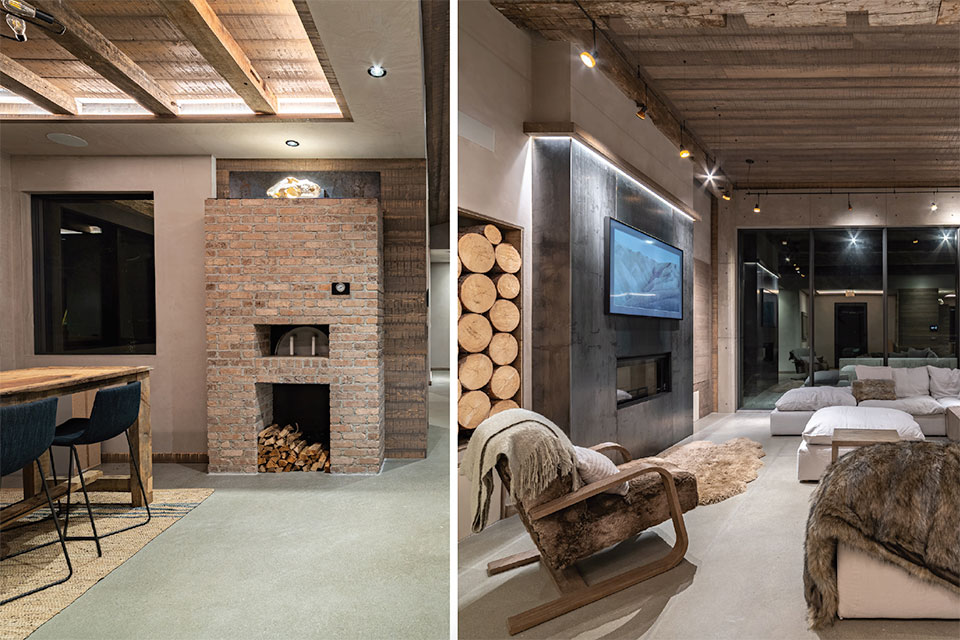 “I wanted to do something extremely different than anything we’d ever done before. We used different methods and conveyed a lot more European flavor than we’d ever put into any other project. More than anything, I wanted the horse ranch to drive design,” says Payne. He also keeps ten horses on the property, including his three-year-old daughter’s two ponies.

Payne used tons of concrete mixed with wood to communicate the ranch heritage. His use of a more modern look for reclaimed wood is a fresh take on the barn feel of a traditional ranch. He describes it as enduring, not tired. The home has ultra-modern lighting details and fixtures to keep the aesthetic moving forward.

Payne explains, “I’ve never had a project that impacted clients like this one. Every single client I show it to forgets what they thought they wanted. Instead, they want their home to have the same feel as the ranch.”

One of the features clients gravitate to is a true Italian plaster. It has been used for hundreds of years and is a much different-looking treatment than the Venetian plaster seen in many luxury homes throughout Montana. The finishes play against expansive walls of concrete mixed with equally expansive walls of glass. As Payne explains, “You feel like you’re outside when you’re inside.”

Another appealing feature of Payne’s modern ranch house is the lack of soaring cathedral ceilings. Instead, it stays true to how ranchers built their homes 100 years ago with lower ceilings. “I wanted it to feel like an old ranch house that was cozy and warm, but also I wanted it to still be grand,” says Payne. To achieve that environment, Payne made the tallest ceiling 13 feet high. Most rooms have some sort of vault or changes to the ceiling lines. The practical effect is a home that is easier to heat and is more functional. 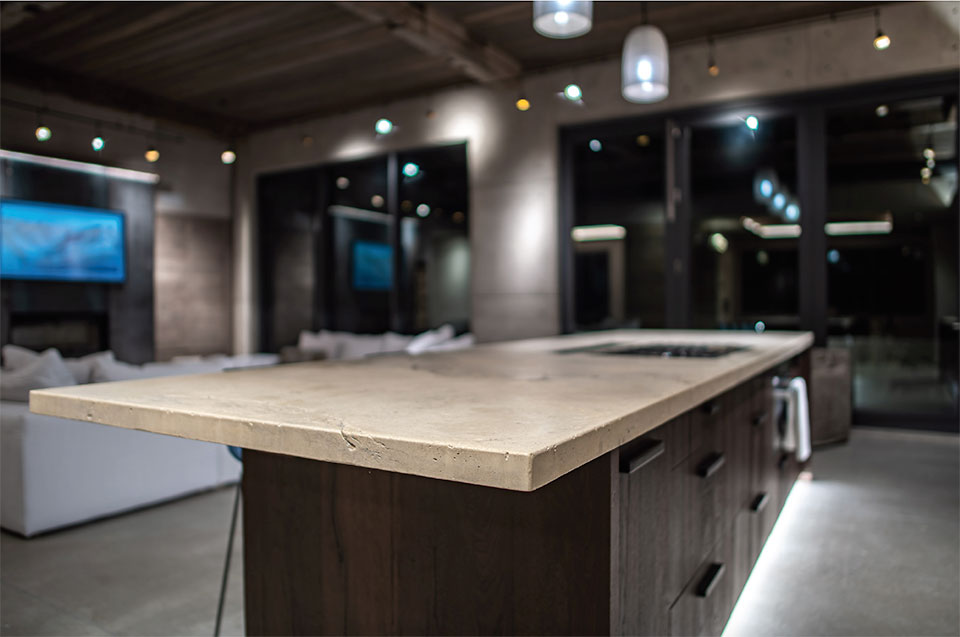 “Concrete seals the walls up drastically better than sheetrock. It’s denser, so it’s easier to heat, and it’s proven to last. European plaster products have been around for 700 years. Most people in Italy and Germany live in homes that are hundreds of years old, and they’ve plastered every inch of them. The Europeans have been using concrete plaster a long time and have it figured out. Sheetrock is used a lot in the U.S. because it is cheap and fast, but it does not have nearly the integrity of what true plaster has,” explains Payne.

Another project nuWest completed is the restoration of commercial space in downtown Kalispell. For this 44,000-square-foot commercial project, nuWest completely rebuilt and renovated two 100-year-old buildings. The company gutted an old movie theater and a hotel down to bare brick walls and dirt floors, redid the brick walls, and added 20,000 square feet to the footprint to build the brand-new headquarters of the Fresh Light Church.

Payne recalls that the most challenging parts of the job were, “to bring back to life two buildings that were each 100 years old, to build a new structure that will last for another 100 years, and to make sure everything looked appropriate and matched the history of the old buildings.” 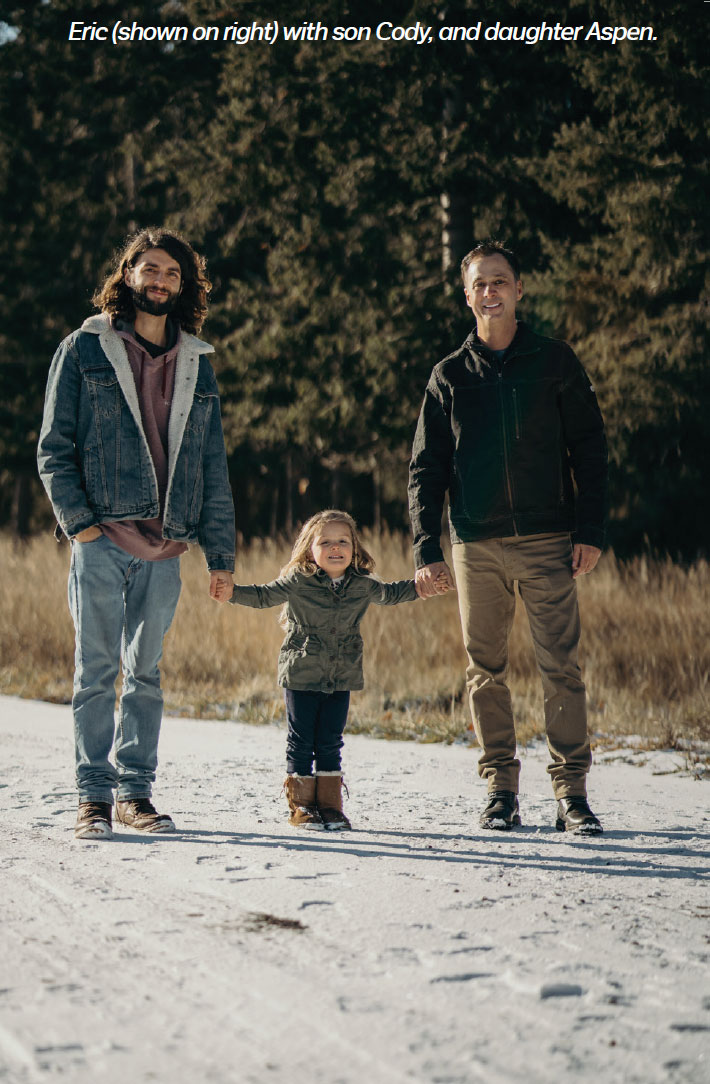 “In Europe, they create huge concrete wall tiles without having to pour them in place. I worked locally with a craftsman who does concrete countertops to develop the treatment I was going after, which was the first time the product was used here.”
–Eric Payne, nuWest Builders

Concrete was the main material that helped nuWest accomplish those goals. Payne remembers, “We used more concrete there than we’d used anywhere else, but it brought together all that hundred-year-old brick with another product that was modern. We made it look like it was meant to be there all along.”

nuWest had a lot of creative freedom on the project. The architects provided generic drafted plans but nuWest worked organically with the founders, room by room, to create a spectacular facility. The completed project took 15 months and takes up three-quarters of a city block just off of Kalispell’s Main Street.

In addition to gleaning construction influence from Europe’s use of concrete, Payne also gets his design inspiration from the Continent. He sources finishes, windows, and other components that are not outrageously difficult to ship from Europe. He duplicates the rest in partnership with local craftsmen.

Payne recalls an instance involving an ultra-modern mountain lodge house that used concrete wall panels before the product was readily available here. “In Europe, they create huge concrete wall tiles without having to pour them in place. I worked locally with a craftsman who does concrete countertops to develop the treatment I was going after, which was the first time the product was used here. It wasn’t available four years ago,” says Payne. “Now, we’ve moved to a different version of concrete wall finish that I helped develop with a different local craftsman. It has more flexibility and costs less. We can use it more.” 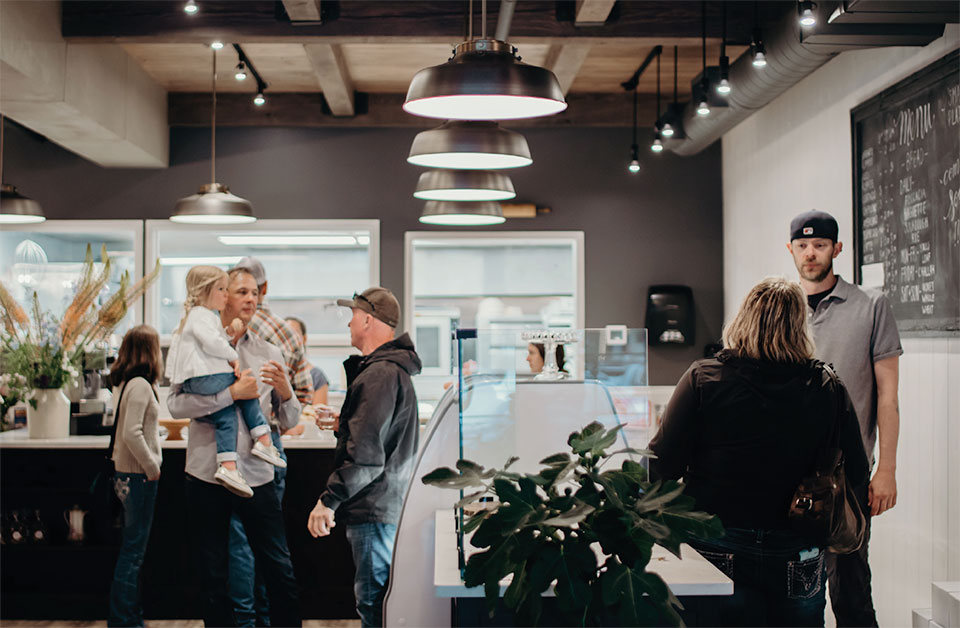 Looking ahead, Payne is excited about expanding the commercial side of his business and taking projects from raw ground to completion in partnership with developers, investors, and clients. He admires lifestyle destination projects that combine lofts to live and work, with restaurants and retail surrounding walkable spaces. nuWest is looking forward to influencing and driving entire shopping areas that incorporate multiple uses for the complete live/work/play lifestyle, including a project that is in the early planning stages in Whitefish.

nuWest also relocated its offices to downtown Whitefish on Central Avenue in a location that adjoins some of the work it has completed over the past decade. Payne says, “It’s fun being in the midst of downtown among the projects we’ve created. We’re going into this next phase ready to create something spectacular for Whitefish.”