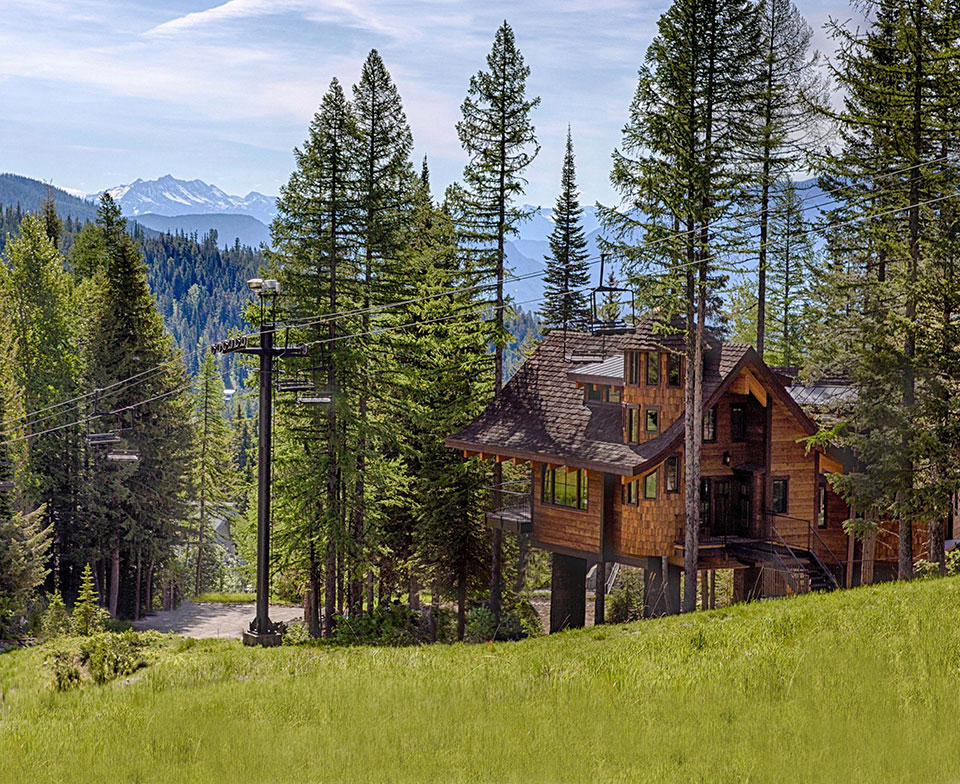 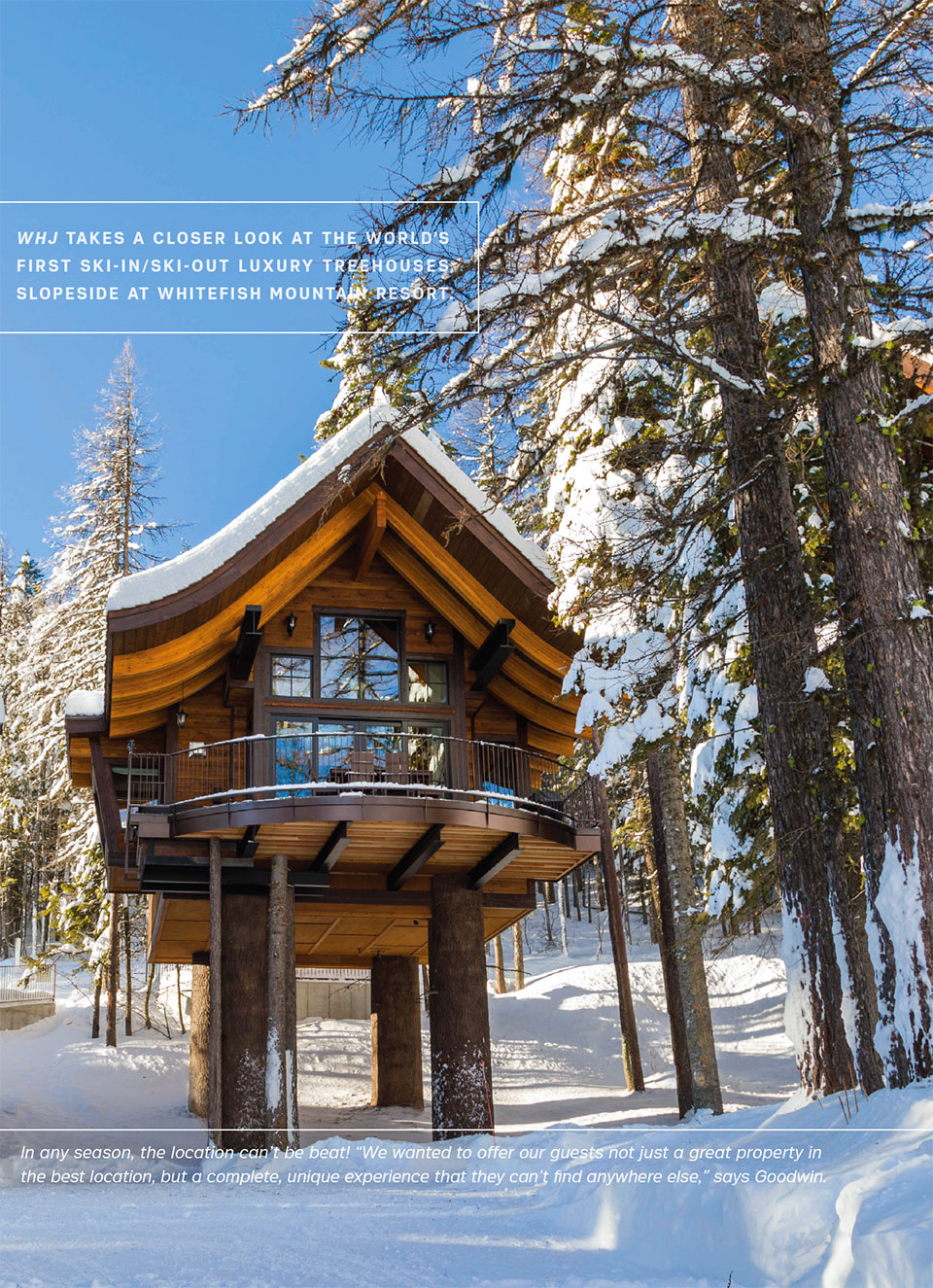 What happens when an entrepreneur with an affinity for real estate development, who is also an avid skier and sailor, locates the ideal slopeside parcel at the base of Whitefish Mountain Resort in Montana and transforms her childhood dream of building treehouses into the world’s first luxury ski-in ski-out treehouse resort? Magic!

Gail Lynne Goodwin is a self-proclaimed serial entrepreneur whose wonder-filled energy infuses her life and who felt as a child that “nothing was impossible” when she sat inside her primitive treehouse back in Pennsylvania. So it was perfectly natural when she dreamed about others feeling the same giddiness over spending time in a structure suspended in the treetops. “We want our guests to feel as if they are in their own storybook home,” says Goodwin. And, with her history in hospitality since 1981, it was no surprise when the three bold and expressive handcrafted treehouses were recently awarded a spot on TIME magazine’s 2018 List of the World’s 100 Greatest Places. And, when more accolades appeared from Ski Magazine, voting Whitefish Mountain Resort #1 in the West and Condé Nast Traveler Reader’s Choice Awards, placing the resort in the #4 spot of Best Ski Resorts in the U.S. and Canada while highlighting Snow Bear Chalets, Goodwin knew her dream had been realized.

A decade ago, when real estate, inspiration, and her wild ideas merged, Goodwin acquired her first property, Dreaming Bear Lodge in Whitefish. Then, when the bear energy hit her again (the bear has long been her heart totem), she chose to create the Glacier Bear Retreat inside one of the nation’s most revered areas of northwestern Montana, Glacier National Park. Most recently, when the bear appeared in Goodwin’s thoughts, she trusted that energy and connected both spiritually and auspiciously with a project manager from a highly respected construction company in town, Malmquist. Now, because it’s Goodwin and because she is recognized for her steadfastness as well as her striking ability to create opportunity, it’s no surprise that her project manager happened to be known as “Bear.” Coincidentally, Bear and Goodwin didn’t connect until the day after he rode the chairlift by Snow Bear three times and shared his wish to be involved in her project with a friend.

Goodwin and “Bear” Barinowski both felt like lightning struck when they approached the privileged spot with its complex architecture and a shared dedication to its playful and effervescent qualities. “Malmquist Construction has worked on a huge array of structures over the past 22 years in Whitefish. Never has a structure captured our attention like Snow Bear Chalets. Every day on the job we stood back, took a deep breath, and smiled when we looked at the beauty, elegance, and whimsical design of these treehouses. I liked that Gail was open to ideas and that she thought on the fly and made decisions so well. We really enjoyed working with her,” shares Barinowski. However, treehouses can be tricky and this feat came with its share of tests. “It was incredibly fun, but definitely a challenge. Everything we did involved working 26’ off the ground so it necessitated some strategic planning to coordinate getting materials staged and placed and using equipment to assemble these buildings,” states Tyler Frank, owner of Malmquist Construction. “We had four man lifts on the property because we couldn’t use a ladder!” he continues. Barinowski adds, “When you’re working on and in them, you’re so close to the forest (literally and figuratively) you can’t see it, but when you step back you see the beauty in the details, in the intricate yet simplistic design.” 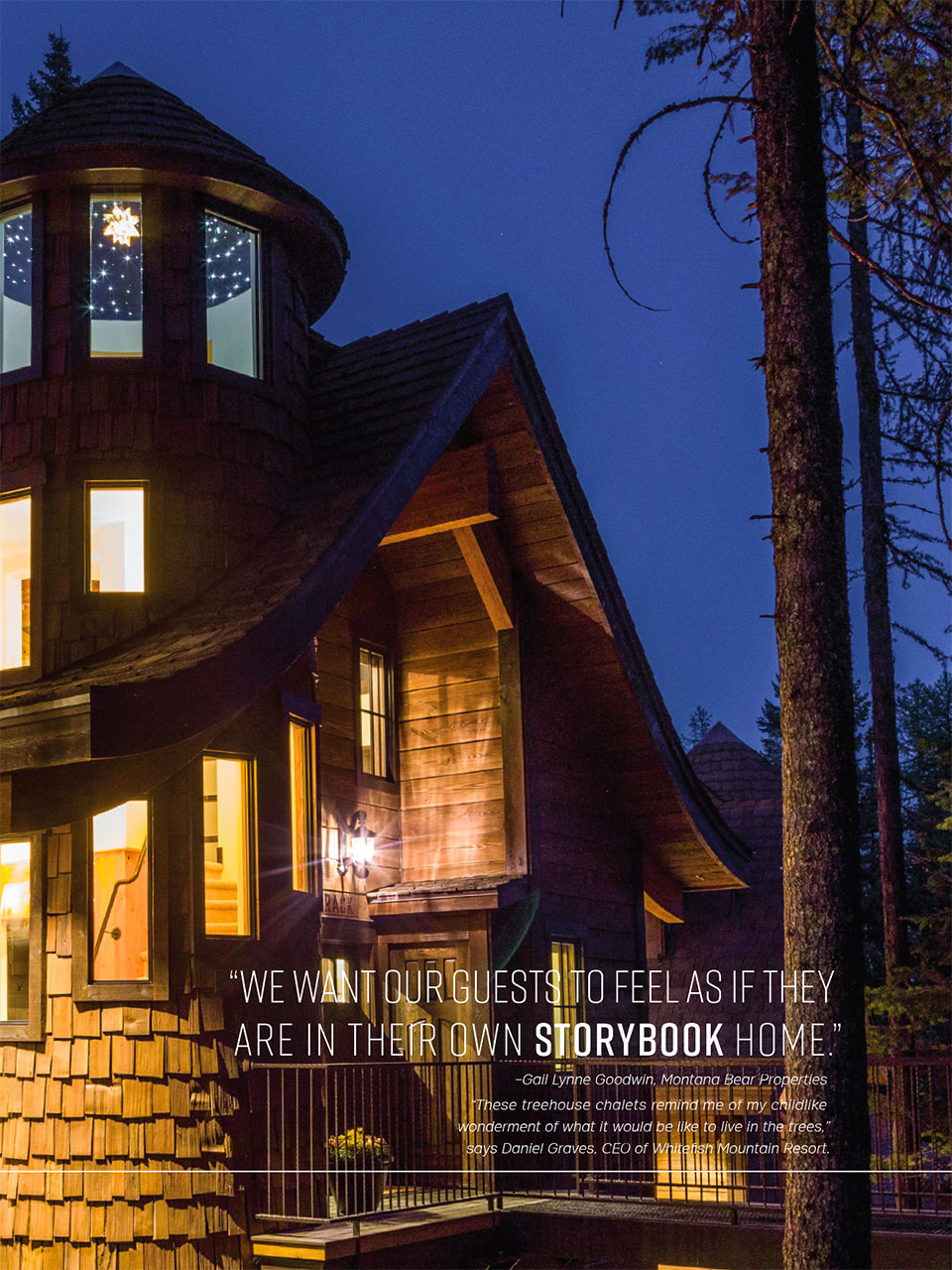 To capture Goodwin’s vision of living aloft and on the slopes meant coordinating function with fantasy. Extraordinary project management is key to a positive and collaborative building experience. “It’s rewarding when we execute a detail that has never been performed before and it turns out well,” Frank adds. “How to be pioneers in the industry and create something unique is why we like doing the caliber of homes and projects that we do because every day is different.”

“One of the things that made this project so unique,” says Goodwin, “is that every Friday I’d go up and cater lunch (homemade chicken pot pies) for whoever was on the jobsite. I’d call ahead and find out how many were there and we did this throughout the project. When we broke ground in September 2016, that October was the rainiest on record in 102 years, followed by the most snow in 72 years that winter and then one of the snowiest spring seasons. ‘What’s next,’ we asked ourselves. But our team worked through it all, and did so with a smile. I don’t think I’ve ever worked with a kinder, more decent human being in my life than Bear. Kindness is what built those tree houses,” says Goodwin.

If kindness is the magical ingredient, then the meticulously considered and constructed treehouses brimming with childlike wonder are certainly the coolest and happiest places in the world to be. “I don’t care who you are, you walk through the doors of Snow Bear and your jaw is going to hit the floor! You’re going to be touched in such a way that you’re going to have a vacation that you’ll never forget!” says Goodwin. And that statement is echoed throughout every visitor’s stay. The reasons why? The unbelievable great room with its cathedral ceiling and floor-to-ceiling windows, a huge wraparound deck with awe-inspiring views, the phenomenal gourmet kitchen kitted out with top-of-the-line appliances, and bedrooms infused with a sense of loftiness (they’re cantilevered out into the treetops) with luxurious linens, white goosedown comforters, and so much more. “Where else can you enjoy a hot tub 30 feet up in the air on your own private deck, under a chairlift?” asks Goodwin. Nowhere that we know of. It’s true that these are the world’s first slopeside ski-in ski-out luxury treehouse accommodations. 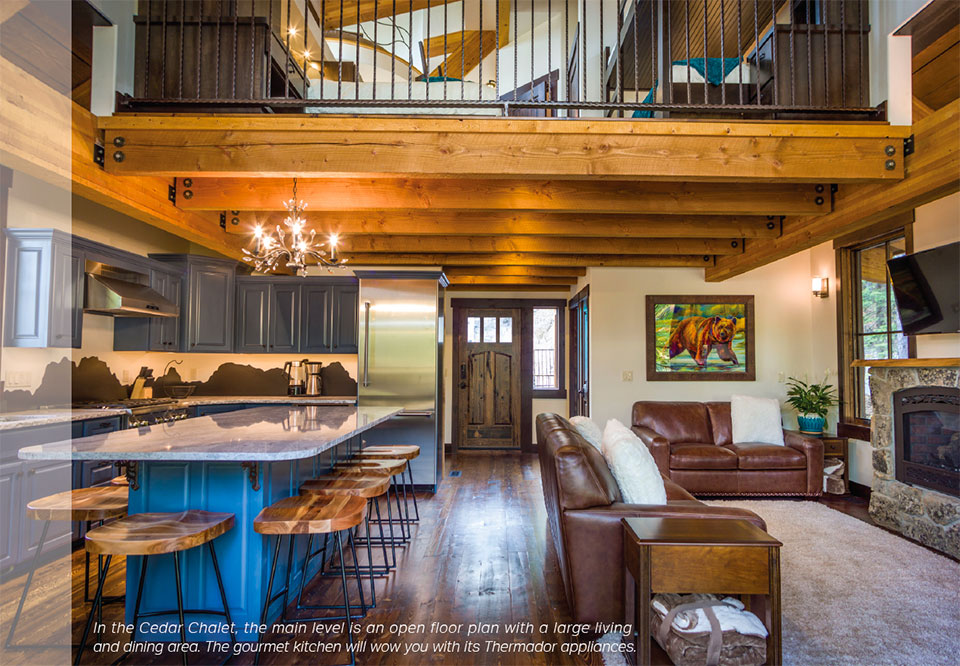 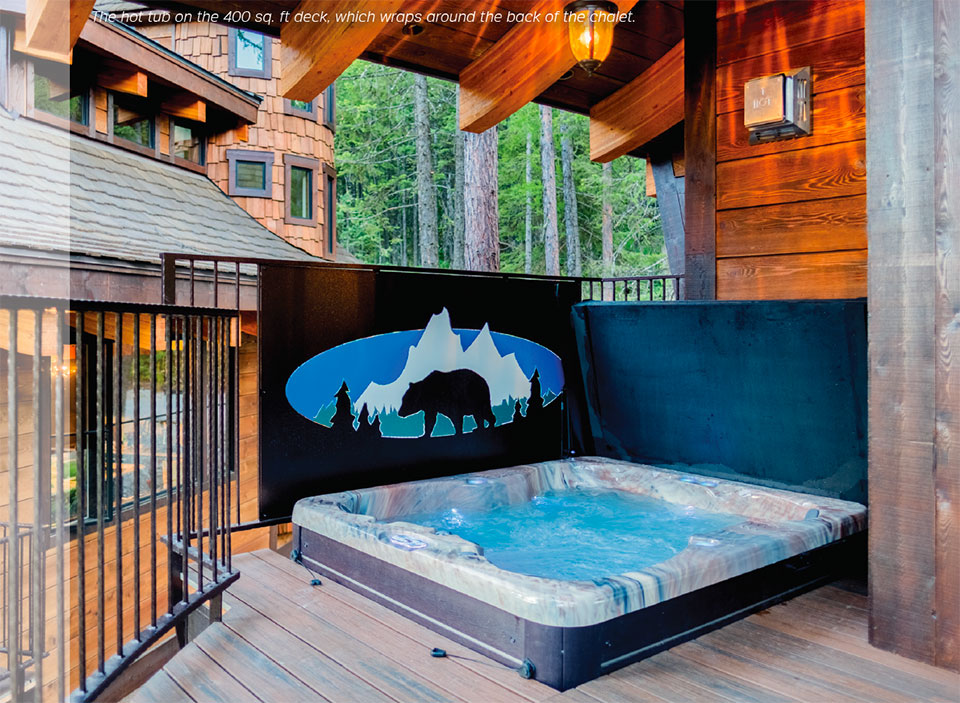 These digs are most assuredly not charming fairy tale-type cabins flocked in plaid and chintz and floral. “There’s a vibe you feel when you walk in,” states Goodwin. The Ponderosa, Tamarack, and Cedar chalets are a door to the wild with their ship’s ladders, Montana Moss rock fireplaces, winding staircases, sliding barn doors, hot tubs, Sonos systems, and stargazing turrets complete with 600 fiber-optic twinkle lights in the ceilings! These retreats are remarkable examples of what can be experienced when a visionary like Goodwin and the expertise from Malmquist join forces. “The space is wonderfully planned in that everything is utilized, functional, and comfortable,” remarks Barinowski. “Every time I’m on the ski lift or drive by the treehouses, I have this great smile on my face knowing the process, and the people, and the product.”

Floating among the treetops creates a sense of lightness in the surrounding terrain. Being immersed in the treetops is a slice of heaven in an enchanting slopeside location for nature seekers, skiers, hikers, bikers, and anyone who values the conveniences of home combined with the indulgence of an unforgettable experience.

“Building something creative is the most exciting thing for me. I just can’t do boring.  I will not build boring. And when someone says, let’s build a box and fill it with little boxes and call them condos and sell them and they will all look alike, it’s like ticky-tacky, it drives me nuts,” claims Goodwin. “That’s why we did swooping beams and soaring turrets. We want our guests to feel inspired by nature, by the architecture, and by being with each other.” After hearing from friends and families at Glacier Bear Retreat, which sleeps 11 people, that it’d be great to have a property to accommodate larger parties, Goodwin’s instinct to provide three Snow Bear Chalets proved perfect for family gatherings, reunions, and corporate and creative retreats. Ponderosa and Tamarack each sleep 6, and Cedar sleeps 10, allowing groups of 22 people to enjoy these remarkable treehouse chalets. There is ample space and “three of everything” right next door to each other. Goodwin believes it’s important to “share the together time when you choose to, and have private time when you need to” during any vacation. 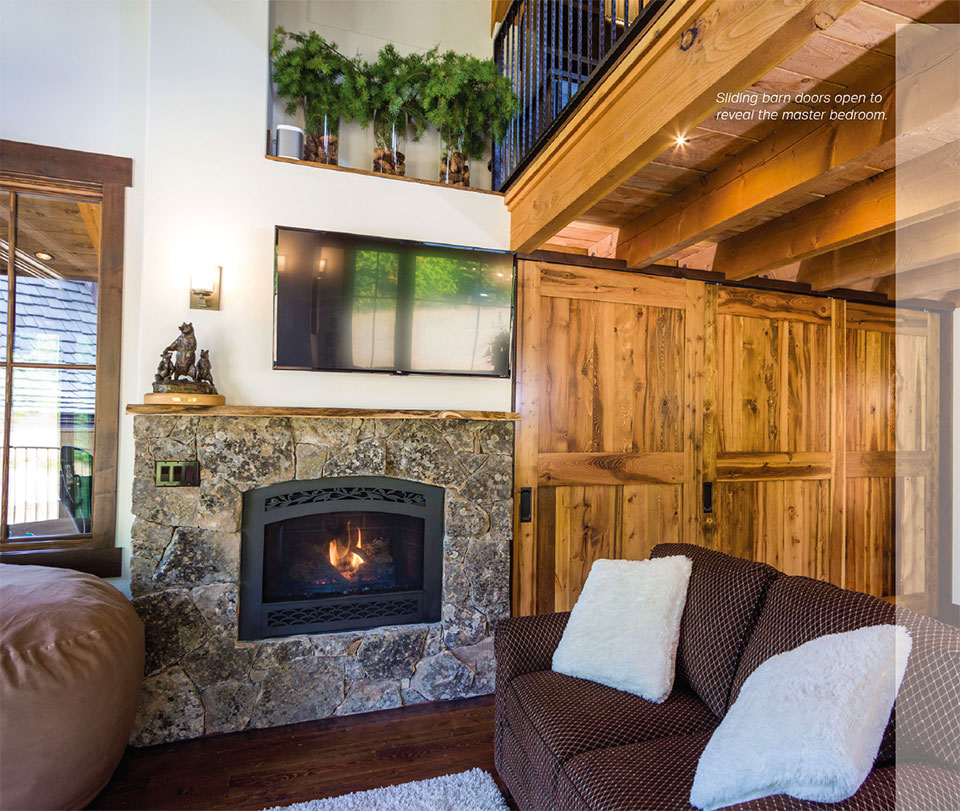 “There have only been two complaints since we opened. One, guests feel their stay wasn’t long enough, and two, the pictures don’t do it justice!” And, there’s no disputing Sir Richard Branson who remarked about the uniqueness of Snow Bear Chalets with, “The best entrepreneurial ideas always start with crazy!”
–Gail Lynne Goodwin, Montana Bear Properties

With Glacier National Park just 25 miles away and Whitefish Mountain Resort just five feet away, the options for adventure or solitude are endless during all seasons. Glacier National Park hosts upwards of three million visitors per year, yet its location in northwestern Montana feels miles away from anything that resembles an urban environment. With Lake McDonald, West Glacier, and the famous Going to the Sun Road, as well as boating, whitewater rafting, horseback riding, and swimming in the spring, summer, and fall months and skiing, snowboarding, snowshoeing, and snowmobiling in the winter months, there are glorious adventures waiting to be had year-round.

Goodwin also offers concierge services, which include everything from organic catering to tour planning, making a stay in these storybook treehouses an unparalleled experience. “There have only been two complaints since we opened. One, guests feel their stay wasn’t long enough, and two, guests say that the pictures don’t do it justice!” And, there’s no disputing Sir Richard Branson who remarked about the uniqueness of Snow Bear Chalets, saying, “The best entrepreneurial ideas always start with crazy!” Connect with Mother Nature, enjoy the magnificence of Glacier National Park, stay in an otherworldly treehouse, and take home the memories of the best days of your life. The only place in the world to do this is at Snow Bear Chalets.

And now, three very fortunate, select families can enjoy Snow Bear permanently, as Goodwin and Malmquist team up once again to create Snow Bear Penthouses, a slopeside project adjacent to Snow Bear Chalets. These three brand new condos will be available for move in this Christmas. Can you think of a better present to put under your tree than your very own Snow Bear? 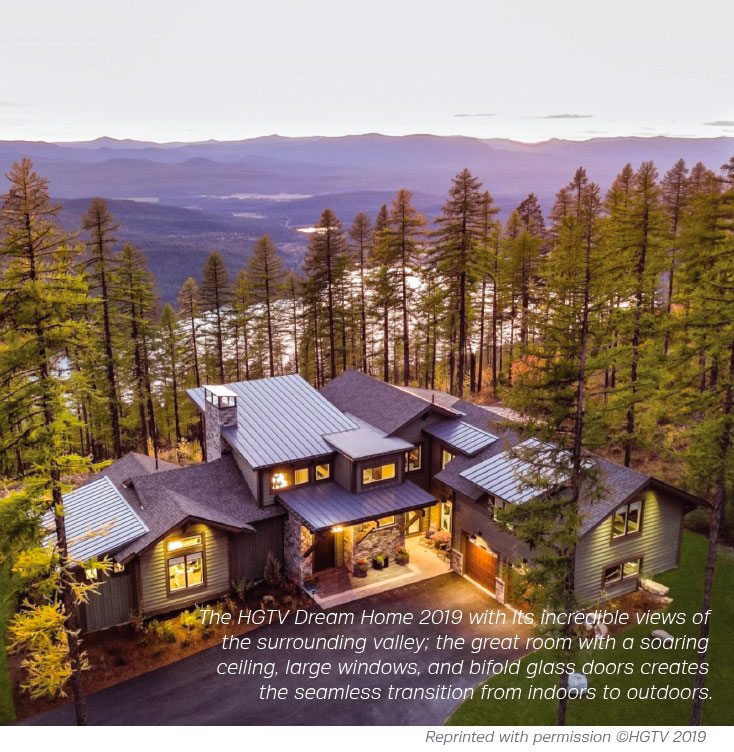 With a stellar company team comprised of project managers and engineers, Malmquist Construction’s history of building unique luxury homes include a diversity of styles many builders would envy. From ultra-modern to epic lodge, from off-the-grid to big-city loft, from whimsical chalet to lake retreat, Frank has taken beauty and design to new heights with his team’s dedication to form and function while connecting nature and environment in each structure regardless of location, complexity, size, or budget.

The HGTV Dream Home for 2019. It’s a stunning modern mountain escape tucked in the trees overlooking Whitefish Lake. The Malmquist team was involved from ideation to ideal home. From now until mid-February, enter to win and your dream of living in northwest Montana with wide-open skies, vast lakes, and exquisite seasons could be just one step away. 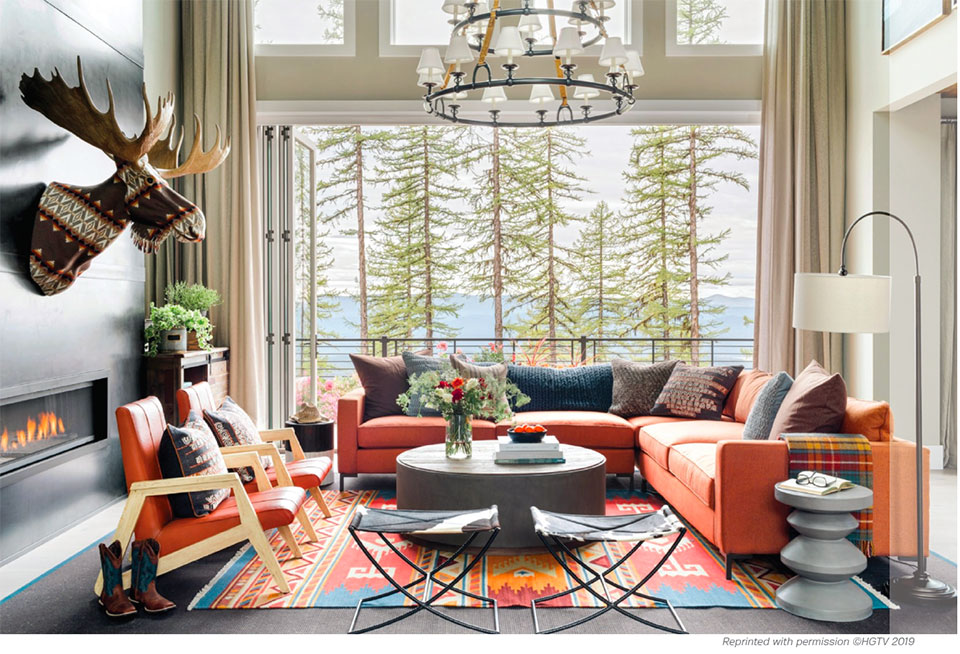