Working With Wood in the Modern West Partner Website 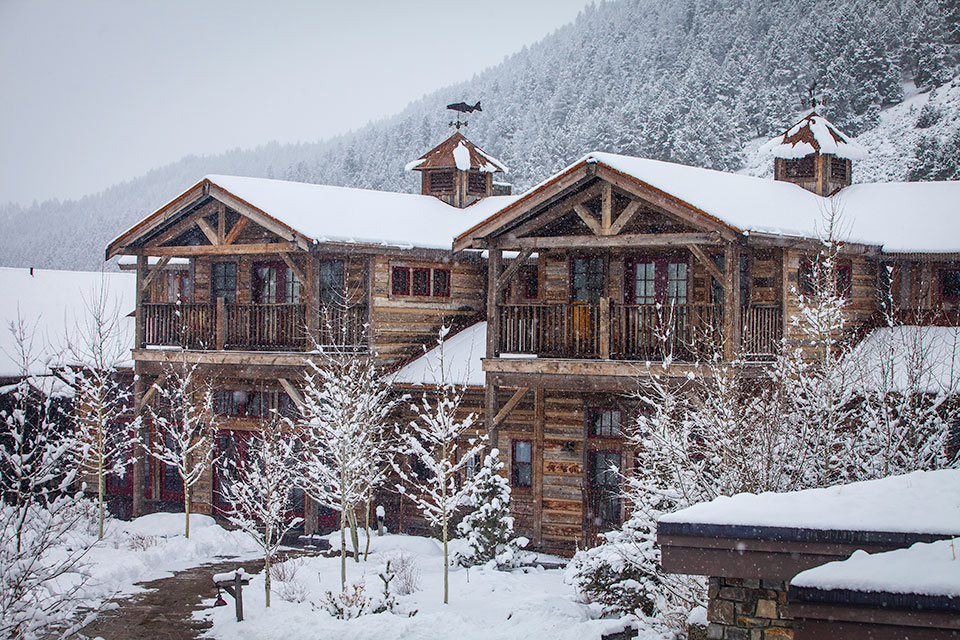 Wood is one of the oldest building materials in human history. From the first huts and human tools to contemporary design’s most prized creations, wood, as a material, is at the center. The appeal of timber products, in all their potential variations, endures today. A well-crafted wood piece lends timeless warmth and beauty to the heart of a home. From structural elements to fine furnishings to artisan details, Western Home Journal spotlights how expert local craftsmen create with a medium that continues to take on new and relevant forms in our modern lives. 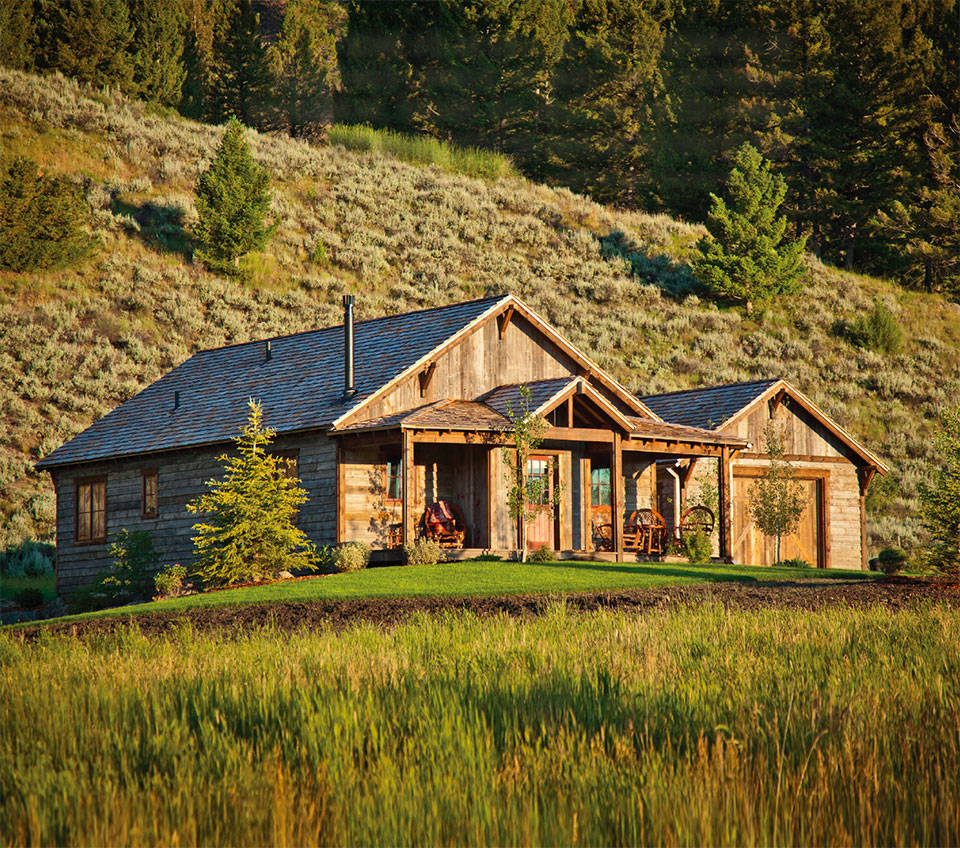 “Some folks call me the godfather of reclaimed lumber. My wife has a different name for me, though. She calls me a wood junkie; she says I need to have an intervention.”

“Some folks call me the godfather of reclaimed lumber,” quips John Medlinger while appraising the four-decade history of his Missoula-based company, Superior Hardwoods. “My wife has a different name for me, though. She calls me a wood junkie; she says I need to have an intervention.” A habit for wood buying seems the best kind of addiction for a man who has made a name in manufacturing reclaimed and wide-plank lumber products. And whether you call John a Junkie or a Godfather, clients throughout Montana and the country enjoy the fruits of his proclivity for quality hardwood products.

Superior Hardwoods began as a small logging project for John. His family inherited some land in the Upper Peninsula area of Michigan in the late 1970s, just a couple of miles from the shore of the company’s namesake, Lake Superior. With the help of a friend, John logged and milled a portion of the land’s timber, and trucked it back to his home in Missoula for sale. Those few truckloads of lumber soon became a calling. “Logging those hardwoods to sell as wholesale lumber quickly morphed into manufacturing flooring from hardwoods in the ‘80s. That’s where Superior has found success ever since,” John explains.

“Flooring is where our product expertise really makes a difference for the client,” says Cory Medlinger, John’s son who works directly with clients to match their specific needs to Superior’s wide range of products. “We create both reclaimed and new solid hardwood floors to fit a large range of traditional and mountain modern designs. We also carry some of the best engineered and pre-finished options available, so there are certainly many choices. Our years of knowledge is the best guide for customers to narrow down their selection process.”

“It’s really about understanding each client’s project, educating them on the options, and being able to match them up with a product that is going to meet their needs, both structurally and aesthetically,” adds John. He explains that there are benefits to each style of flooring. An engineered floor may offer needed stability over radiant floors, pre-finished options can help keep a project timeline moving or cut down on remodeling dust, and reclaimed or on-site finished hardwoods provide truly custom and timeless looks for clients. All product options have their upsides and necessary considerations, John explains. “It comes down to asking the right questions and then guiding customers through their choices with our experience. We’ve done a lot of flooring, (hundreds of thousands of square feet), over the years. So we know what works.”

Of those many square feet of flooring, Superior has created a few signature lines to fit their client’s desires, each with unique attributes. Their Wilderness Series, for example, is a full range of new hardwoods—from cherry to hickory—all circle-sawn to develop character. “There are only a few mills left that still use a true circular saw,” says John. “We choose to use them instead of duplicating the circle-sawn look through other methods, and the authenticity of the Wilderness Series reflects that choice.”

“When a person can understand the process involved in reclaimed lumber, they really start to see its value. There isn’t another kind of lumber that has more natural character and more care put into each piece.”
–John Medlinger, Superior Hardwoods

The Heirloom Series represents Superior’s reclaimed flooring line, and John is no stranger to reclaimed lumber. Rather, Superior has been salvaging and repurposing lumber for over 30 years and is among the first manufacturers of reclaimed products in the state. “Our first reclamation project was a turn-of-the-century apple storage building near Lolo, taken down in the late ‘80s,” says John. Now, as reclaimed products have become one of the most defining characteristics of mountain home design, Superior continues to create reclaimed products with deep historical character. Their Glacier Grainery plank flooring, for instance, is a nod to the Northwest’s agricultural roots, with each board salvaged from grainery buildings throughout the region.

Superior’s reclaimed products also include exterior siding, large-form timbers, and specialty materials that go into everything from beams to bunk beds, cabinetry to striking fireplace mantel installations. Cory says, “We see some homes that have a very mountain-modern look; using wood as an accent to glass, steel, and other materials. For in those homes in particular—where timber becomes the standout material—the quality and character we provide are critical to the project’s success.”

For the team at Superior, the character of reclaimed starts with John’s discerning selection process. Then, the quality is honed in their 4,000-square-foot millwork shop in Missoula, where many hands touch each length of reclaimed lumber: de-nailing, wire-brushing, curing, and moldering each piece. Cory says, “When a person can understand the process involved in reclaimed lumber, they really start to see its value. There isn’t another kind of lumber that has more natural character and more care put into each piece.”

That exceptional care put into Superior’s millwork and manufacturing is a tradition being passed from father to son, as John hands the reins over to Cory, who looks to the future trends in wood manufacturing. John laughs while he reflects on his company legacy, “I’ll retire eventually. But first I’ll have to figure out how to keep myself from buying more wood.” 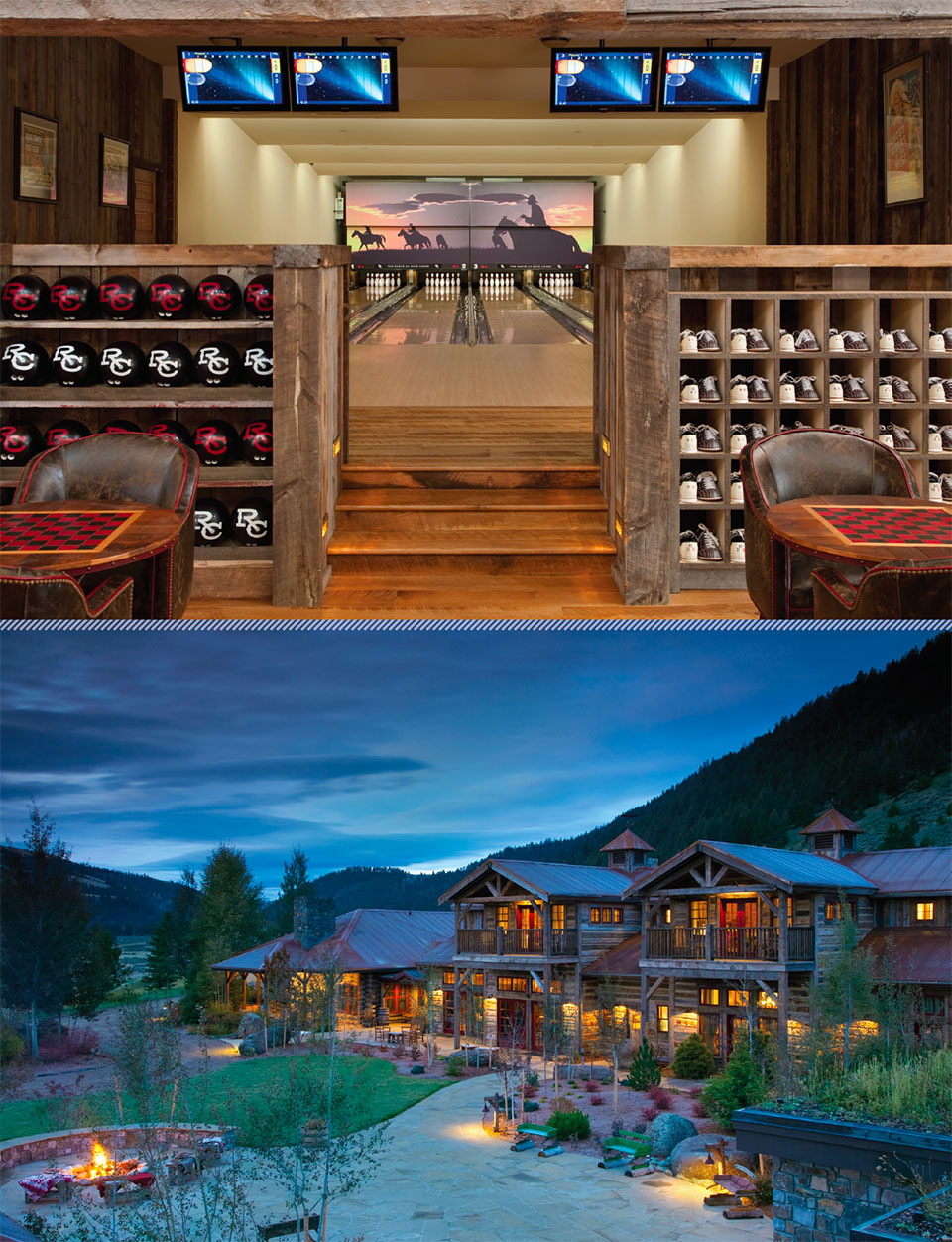 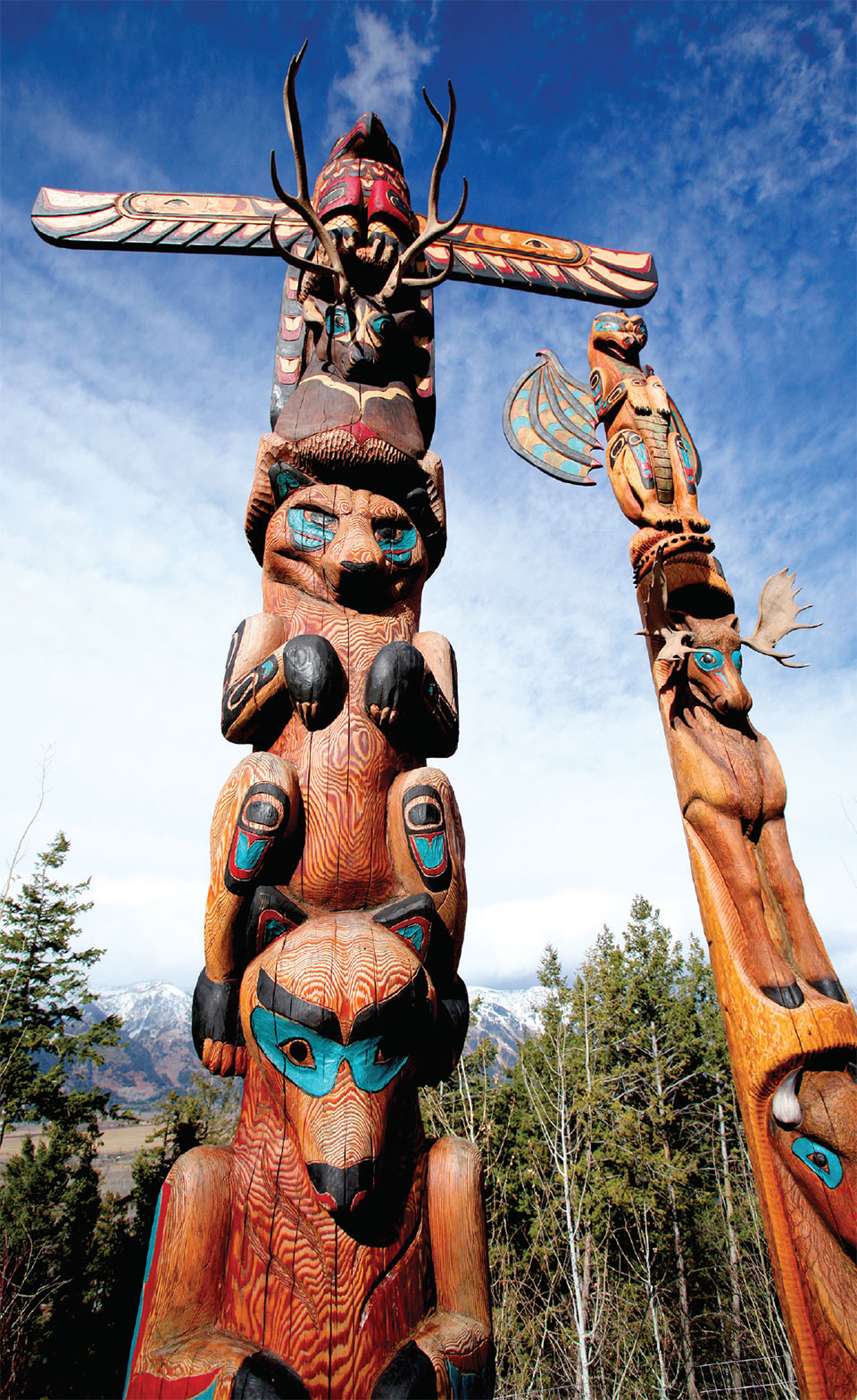 When George Gulli sleeps he dreams of totem poles. He contemplates the massive straight larch logs free of their imperfections, center-lined for their design, and cradled upon several sawhorses. He thoughtfully considers the intricate carvings, which could range from traditional Pacific Northwest Coast Native American tribe symbolism to bold and unique designs that he will arrange on the pole to depict his client’s life, environment, or the poles’ site. As a third-generation carver inspired by his father, his larger-than-life totemic art studs the Rocky Mountains, but also lives as far away as Canada and Ireland. For 37 years, his dreams continue to reflect the gratitude he feels bringing this sacred and oft forgotten art to the world.

The history of totemic art depicts many elements, most notably tribal ancestry, individual clans, wealth, status, and legends. Sometimes events or celebrations were told as stories, hence the reference, “Story poles.” The most identifiable totem poles are those from the Northern Pacific Coast, as in Alaska and British Columbia. However, the American Coast Salish tribes in northern Washington play an essential part in the art’s history and its importance in providing interpretation, cultural teachings, and preservation for future generations. Surprisingly, the word totem is not a Northwest Coast Indian term, nor is totem pole whose origination is an Anglo-European term for “monumental wood pillars carved by people of the northern Pacific Coast.” Rather the terms totem and totemism are “anthropological terms that refers to a variety of beliefs and practices concerning relationships between human groups and natural phenomena, usually animals but also plants, celestial bodies, and other living beings, places, and powers of nature… whose idea-typical version is a free-standing, painted, multi-figured pole, often with outstretched wings.”
*Pauline Hillaire, Scalla-Of the Killer Whale, a Lumni cultural historian.

“Today people want art that they can relate to and enjoy, and I want them to know that if they have a special place and want a carving, I’m their guy.”

So, how did this soft-spoken, wildly intelligent Montanan whose grandfather carved stone in Italian quarries and whose father relished its medium in wood while living in California, take to carving enormous felled trees that require the ultimate in creative visualization to produce a totem so dictated by precision and patience that few non-Natives are ever fully recognized by First Nation tribes as serious artists? By watching his father. “I didn’t want all the knowledge to go away,” says Gulli, “and I began to understand that with each client, and my experience in getting to know them, and the joy they exhibited in having something made specially for them, a piece that looks beautiful in their yard, was really my joy. Being an artist is wonderful. It works for me.” And his clients agree.

There’s the Canadian brewery that ordered an astonishing 24 poles. And, then there’s the couple from Jackson, WY who upon receiving their first work of art a few years back, proudly claimed, “You haven’t heard the last of us yet!” Their recent installation involved a trio of totems whose carving took 10 months. The images on the poles and the sizes of the poles were requested, however the order of the design and details were up to Gulli’s imagination. And, then there’s musician Jason Mraz, whose pole Gulli states combined “a hummingbird on the back of a surfboard, mixed in with an owl, and a cat holding a guitar that I put strings on.” Traditional? No. Whimsical? Possibly, but as Gulli reiterates, “Today people want art that they can relate to and enjoy, and I want them to know that if they have a special place and want a carving, I’m their guy.”

That special place, whether emotional or physical is what Gulli is tempted by. From designing, to measuring, to the pole’s initial cuts, with traditional hand tools like chisels and calipers, to non-traditional tools like grinders and sanders, and chain saws to “chunk out” large pieces of wood, Gulli realizes it is a privilege to carve for that client. “Being able to expand out of my heart is my greatest joy.” That satisfaction is readily seen in both his traditional and non-traditional designs. When a client asks for an eagle or a wolf, Gulli explains its historical significance. The former is known as smart and resourceful as he rules the sky with the ability to transform himself into a human. The latter is very powerful and known to help people who are sick or in need. Totem poles include various symbols that enact powerful reactions to those who stand beneath the monumental sculptures. Alternatively, the poles can signify the entrance to a property, define an honored location, tell a family’s story or a village’s  tale, or commemorate special occasions like marriages and anniversaries. Towering overhead, a totem pole is a complex piece of art constructed from a tree that characterizes an idea or statement and when raised is emblematic of a ceremony.

“People blow my mind with their requests. I am always amazed. It makes my heart full.”

Gulli’s eye for scale and detail is excellent. Working with poles that range in size from 4’ to a staggering 50’, his process is a lesson in restraint and composure. After the carving is complete, selected areas are hand painted prior to sealing the entire pole for protection. Designs from start to finish can range from six weeks to two years depending on size and style. “People blow my mind with their requests. I am always amazed. It makes my heart full.”

To meet Gulli, visit his studio in Victor, MT, where his passion for poles is palpable. Or, visit his website to inquire about the pole you’re dreaming about.