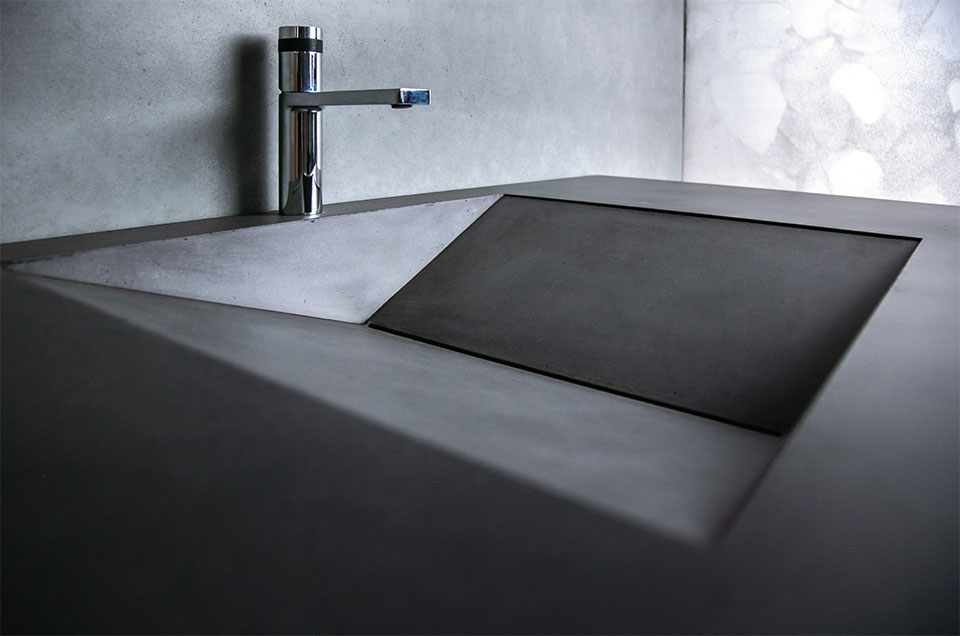 THE EVOLUTION OF ARCHITECTURAL CONCRETE WITH WOVEN 3 DESIGN

Johnny Neal, founder of architectural concrete firm, Woven 3 Design, has been drawing since he was five years old. He got a jump-start on architectural drafting and engineering when he began taking courses at a vocational school during the last two years of high school. He studied graphic design in college and used that foundation to work in animation, web design, and branding. He has always had an eye for composition and used that eye later when he worked in construction. 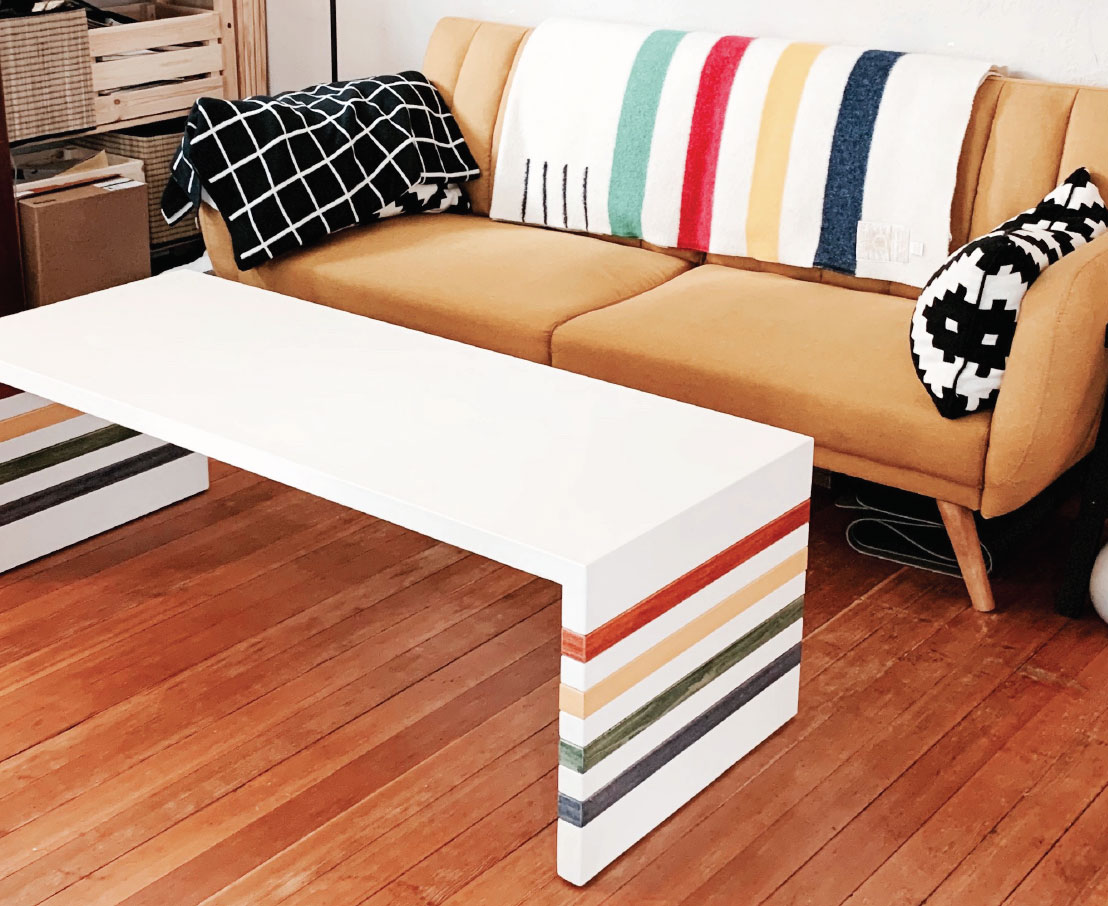 In 2008, Neal launched Woven 3 Design to bring more form to the function of architectural concrete. He leveraged his technical knowledge along with his creative eye to push the limits of architectural design using concrete as his medium of choice. Woven 3 started primarily doing kitchen remodels and has evolved into making concrete furniture for both indoor and outdoor living. Woven 3 works with the trade throughout the Flathead Valley and also directly with homeowners to bring unique concrete designs to life, from coffee tables with custom inlays to rugged-yet-refined statement bathtubs.

Over the past decades, there’s been a lot of technical development in concrete as far as materials and mixes. The advances in concrete technology have allowed Woven 3 to evolve its architectural concrete business from kitchens to furniture and other works of art. “It’s enabled us to get to a place where we’re doing extremely custom pieces that nobody else is able to do,” says Neal. While the technical advancements in the industry may originate with other end uses in mind, Woven 3 has found the most innovative mixes and sealers, as well as new approaches to mold-making work for its architectural design applications.

“We used to draw pieces and then have to figure out how to build them. When you’re making molds, you’re thinking upside-down and inside-out. Now, we can do a CAD or a 3D rendering and translate our ideas into a tangible plan much more easily.”
–Johnny Neal, Founder, Woven 3 Design 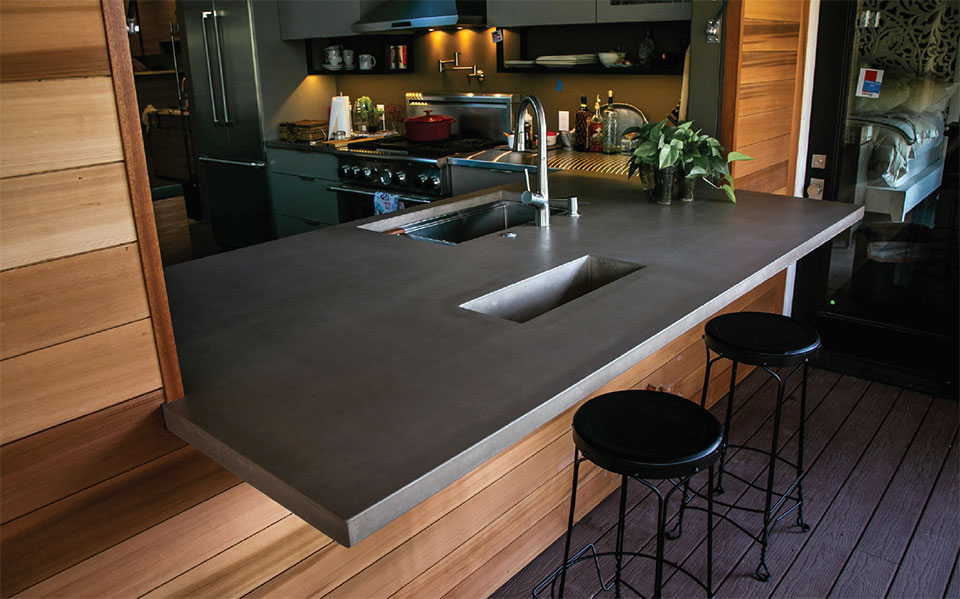 “We used to draw pieces and then have to figure out how to build them,” explains Neal. “When you’re making molds, you’re thinking upside-down and inside-out. Now, we can do a CAD or a 3D rendering and translate our ideas into a tangible plan much more easily.” 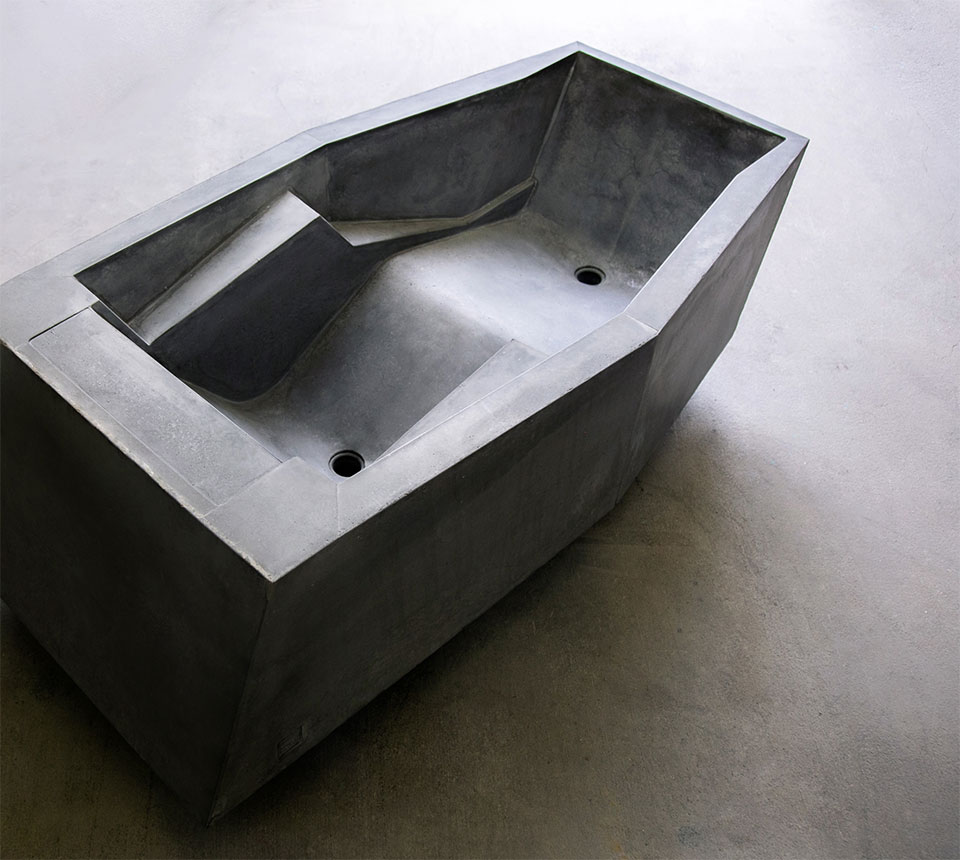 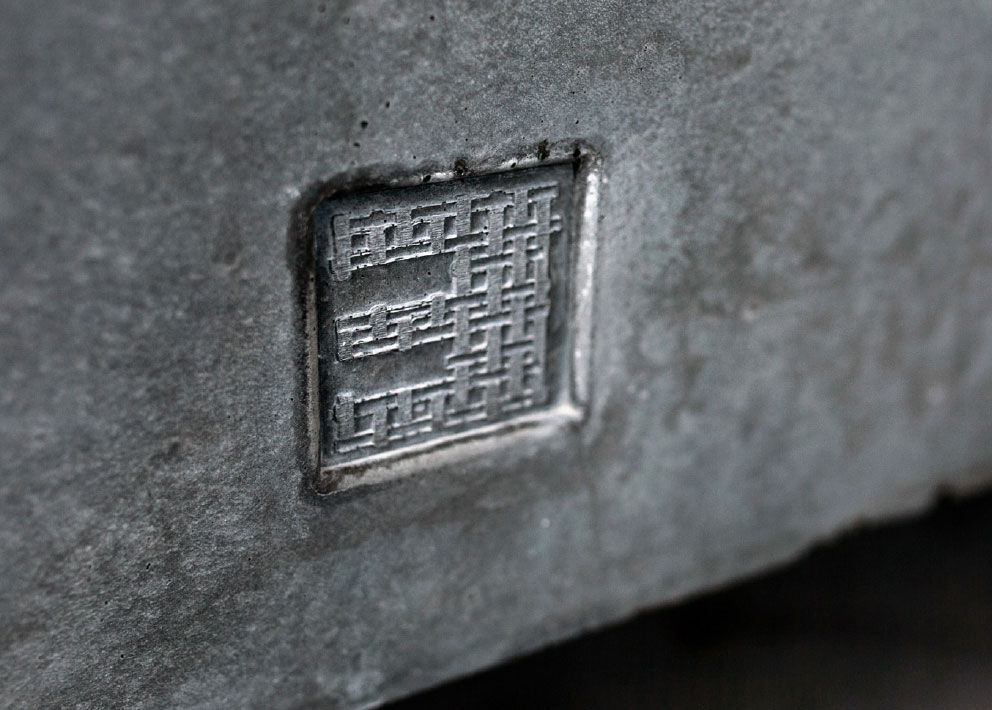 That’s not to say that designs are still not sketched out on cocktail napkins, which is exactly where the idea for a new concrete tub was drawn. The inspiration was a joint idea born between Woven 3 and design partner, Warren Ness of Rock Sculptor. According to Neal, his collaborator carves concrete to look like museum-quality rock carvings. The tub they envisioned would look like it was carved out of a granite stone. One-third of the tub is left raw and rugged, while the finished tub has 65 to 70 percent clean concrete.

Neal says, “We had seen a complete tub someone ground out of a natural rock and thought, why don’t we make it look clean and modern, but still have that rugged and raw aspect?”

For this particular tub, Woven 3 took a hands-on approach instead of sending a CAD to a third party to make the mold, since nothing had ever been done like it before. “We did this tub fully in our shop,” says Neal. “It’s meant to be ergonomic and relaxing for the whole body. It has armrests and shelves of stone steps for easily getting in and out of the tub comfortably. It’s something I wanted to feel out along the way to make sure the mold reflected the design purpose.”

The tub has an insulated surrounding area and is built for comfort as much as visual impact. Once the tub portion was cast, Warren put a scratch coat on it and started carving the rock part, or as Neal says, “He did his magic with the color.” It is a one-of-a-kind addition to a mountain modern or transitional home.

“We had seen a complete tub someone ground out of a natural rock and thought, why don’t we make it look clean and modern, but still have that rugged and raw aspect?”
–Johnny Neal, Founder, Woven 3 Design 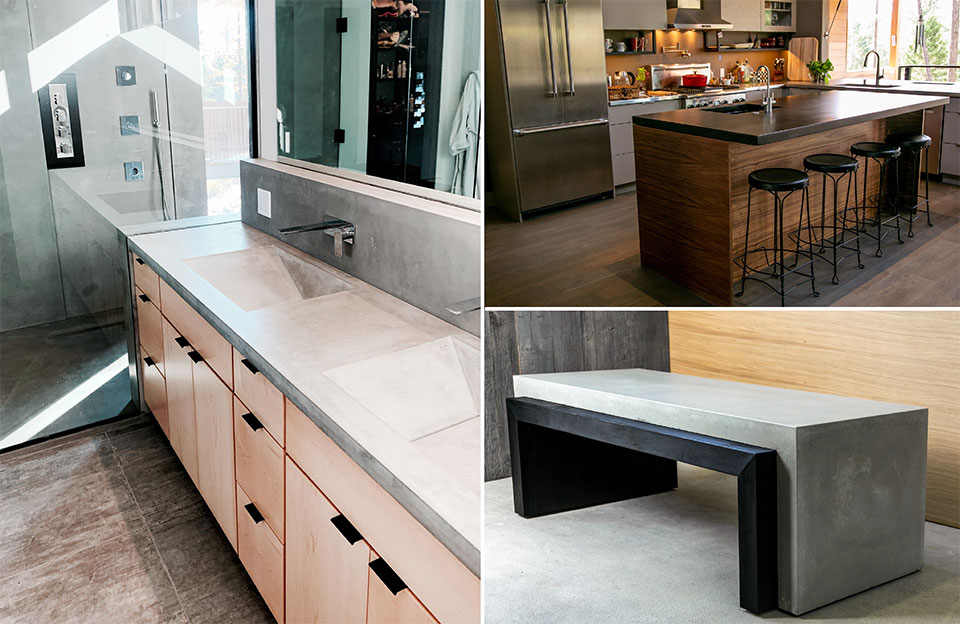 In Woven 3’s shop today, Neal has assembled a team that complements his style and helps get the batching done. Neal loves modern minimalist design, while one of his employees likes to mix it up. That team dynamic often brings a new perspective to pieces in different styles. Woven 3’s shop allows the team to explore their creativity and experiment with techniques for unique pieces. “Everything we do in the shop is custom,” Neal says. To that end, there are no Pinterest knock-offs, no store-bought molds, and no bagged concrete mix designs. Every piece is designed to complement the client or the space it occupies.

The shop also allows Woven 3 the flexibility to alter their production process to create a broad range of furniture pieces in different styles. For inlays, wood, steel, and resin all require a different process and order of application. Whether the piece is inside or outside also dictates how the process will happen.

“I automatically think of expansion and contraction rates. We have to account for whether the material is going to expand at the same rate as the concrete or whether we have to make allowances so it can move freely with the hot and cold cycles.”
–Johnny Neal, Founder, Woven 3 Design

“I automatically think of expansion and contraction rates,” Neal explains. “We have to account for whether the material is going to expand at the same rate as the concrete or whether we have to make allowances so it can move freely with the hot and cold cycles.”

Finished projects, such as a trader blanket coffee table with a stained poplar inlay and bar tops with custom resin inlays, show exactly how masterful Woven 3 is. It is clear that they understand the concrete and the materials they are designing with.

Neal loves displaying his designs when he finishes, especially with pieces that have been challenging. “I always have an appreciation for the process and our finished work,” he says. It’s easy to share that appreciation for Woven 3’s architectural concrete, particularly when nothing else looks quite like it on the market.