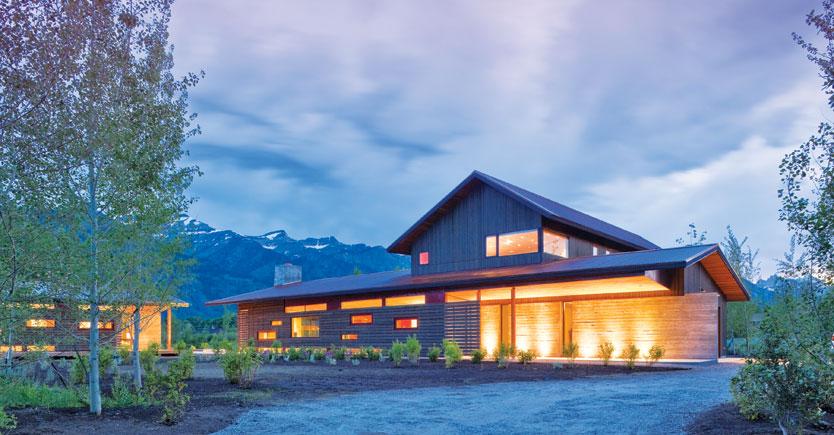 One of my favorite philosophical tenets is that people will agree with you only if they already agree with you. You do not change people’s minds. – Frank Zappa

Admittedly, finding a Frank Zappa quote at the outset of a feature on architecture is a bit unexpected. But bear with me.

If you had been in any Rocky Mountain West resort town in the 1980s or the early 1990s, you might have thought that lodge-style log homes were the wave of the past, present, and future. It made sense, right? All those trees were just begging to be cut down and stacked into luxurious homes. You might go as far as to think that Ralph Lauren and Laura Ashley were designing interior accessories for a reason. And that reason was, those log homes needed floral prints and ruffles. (But of course, you’d be as guilty of being reductive as I.) 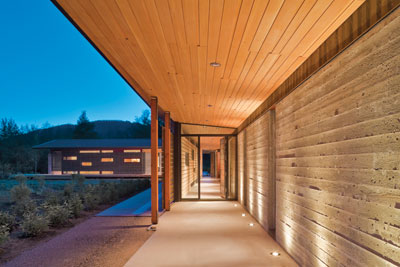 Fast forward to 1993 and meet Stephen Dynia, a New Haven-born architect who cut his architectural teeth practicing at one of the largest international architecture firms in New York City—a firm deeply rooted in all things modern. Now take Dynia, and say he moves to the Tetons, Jackson Hole to be exact (because he loved New York City so much that, “moving to any other city would be an act of infidelity.”) What do you think happens next?

Well, let’s just say this—those of us who are fans of all things modern are glad that Stephen Dynia doesn’t live by Frank Zappa’s favorite philosophical tenet. Maybe Dynia has a bit more faith in people’s ability to change. Maybe Dynia has that much faith in his own abilities. Or maybe, and let’s give this one time to marinate, maybe Dynia knew what others just needed some time to figure out: contemporary design has a place in rustic settings like Jackson Hole. “When I first came to Jackson, I saw a great opportunity because no one was doing modern architecture.” (Of course, I think to myself, the flip side of that is that there isn’t anyone doing modern architecture because there isn’t a demand for it.) “I knew,“ Dynia says as if he can read my mind, “it would take some time to get people interested in my kind of design. I just figured I would have to help them see the possibilities.” 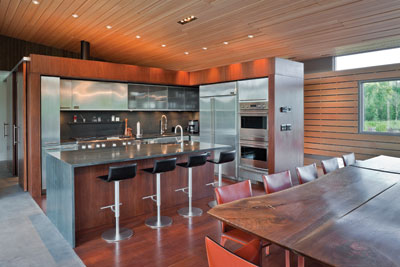 Even though Dynia admits (with an easy command of understatement) that when he first started out in Jackson, “There was some resistance,” the tides have changed. Since one of his earliest projects in East Jackson, a pair of cubes (accessory buildings that were 28x28x28)—one of which he lived in—Dynia has had to spend less time convincing people to go the modern route. More people and organizations are seeking him out (like the people behind the Jackson Hole Performing Arts building), and he has even opened a second office in Denver.

“Modern architecture, in its purest sense, is about restraint,” says Dynia, “and when you have the opportunity to design houses and buildings in a setting like Jackson Hole with these overwhelming vistas, modern design frees you up—you don’t have to abide by any particular style.” Instead, Dynia says, his work is about responding to the site and the way his clients’ want to live in their home, and making sure that each of his designs speaks the vernacular of the place it inhabits.

That takes us back to restraint. “If you look at indigenous architecture, the adobe structures of the Southwest for instance, they are still relevant. They hold heat when they need to and stay cool when they need to. Nothing is superfluous. No indigenous people living in the wilderness built massive log structures with tiny windows. A log house beyond a certain scale or size really only represents our romanticized view of living in the West.” In other words, a log home doesn’t necessarily embrace its environment. Rather, it isolates us from it.

Dynia’s work situates us and invites us to contemplate our surroundings, grounding us in a place and time.

Dynia’s work does just the opposite. It situates us and invites us to contemplate our surroundings. In fact, it asks us to do more than contemplate our surroundings. Dynia’s designs have this unexpected impact: being overwhelmingly breathtaking at first glance and then getting out of the way and allowing the setting to be the star. Dynia’s designs ground us in a place and time. But, they also elevate us beyond those temporal constraints. When you see a Dynia design, you get the sense that this structure will be relevant long after we’ve come and gone. 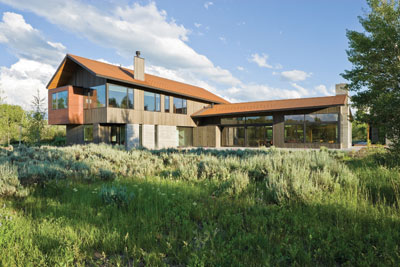 Take the John Dodge house as a case study. This 5,000-square-foot home built in 2008 in Wilson, Wyoming, walks a healthy balance between pushing boundaries, paying homage to the stunning site, and the regulations of the development’s homeowners’ association. “Often in Jackson, it’s not just the 8,000-square-foot building limitation that we need to work with, it can also be the criteria set out by the homeowners’ associations. The John Dodge roof is gabled because the HOA set that as a standard.” But even that nod to conventionality works.

Contrast that with the playful reveal that the slot windows create as you approach the home. Long, horizontal windows run along by your feet and from the ground up, additional horizontal windows playfully reveal more of the house. From the outside it’s a bit like a peep show, but from the inside, you get these great avenues of light. Also on the exterior is this fence-like façade that embraces the rustic setting and gives the home a sense of belonging. And Dynia’s choice of materials (the various types of wood and the board-formed concrete) and the textures he created with these materials add warmth to the home and ground it in the language of its environment while still being true to the clean lines and restraint of modern design.

And then there are the full-scale windows. Walls of windows in fact. In the living and dining room sections, and in the master bedroom. Those windows are like a love letter to the Wyoming vistas just outside. 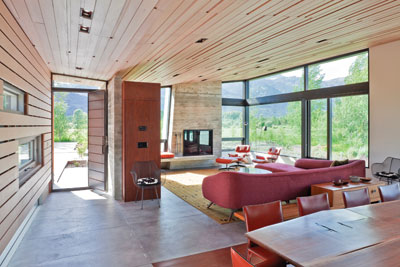 Good modern design demands clean and crisp intention; great modern architecture demands intuitive function as well. “I admire functionalism in all forms—indigenous Wyoming ranches,” Dynia says, “to Russian Constructivism and traditional Japanese architecture. Modernism was based on all these forms.” Walk through any of Dynia’s designs and see evidence of this appreciation of function. Dynia’s designs are meant to be lived in, sure. But what’s more, the design elevates that standard of living.

“When I first started out in Jackson, there was some resistance to the modern nature of my work, and I thought I’d be lucky if one percent of the people were interested in what I was doing.” Given the number of projects Dynia and his firm are currently working on, it seems that Zappa and his favorite philosophical tenet can take a back seat, at least when discussing architecture. I guess Zappa didn’t see Stephen Dynia coming.