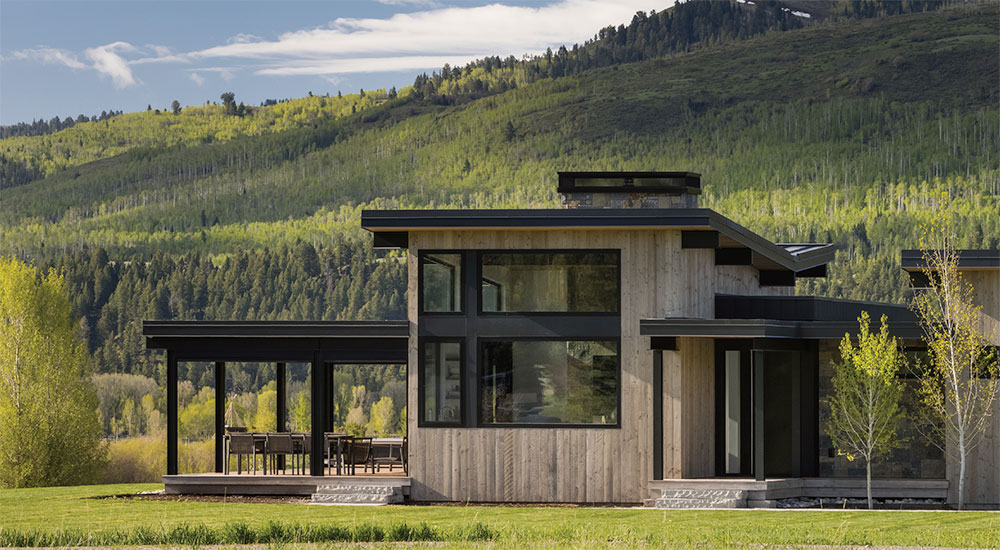 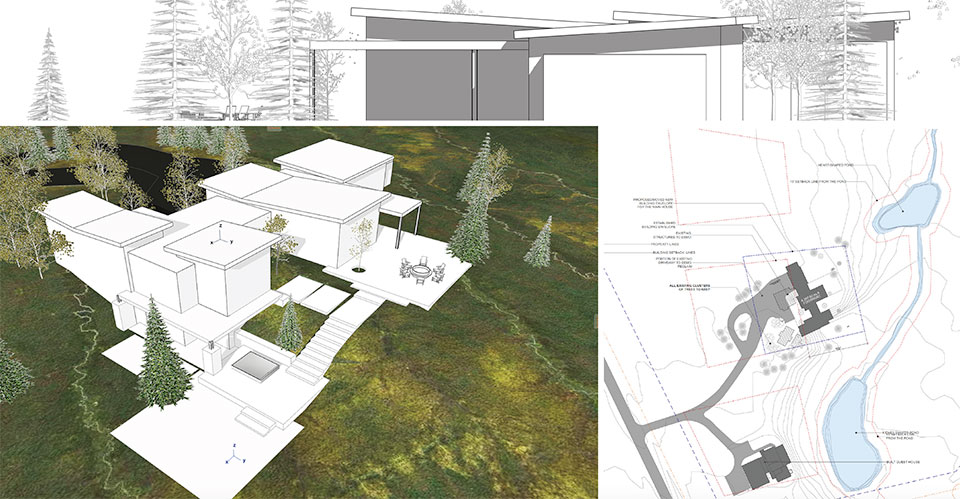 The addition of a guest house is one of the most liberating decisions a homeowner can make.

Creating a curated experience in a space that equals the utilitarianism and beauty of a main house but without all the
requirements of year-round living can inspire many homeowners to surpass finding just a solution for long-term guests with boutique and upscale amenities—creating luxury accommodations that rival the grandeur of nearby resorts. 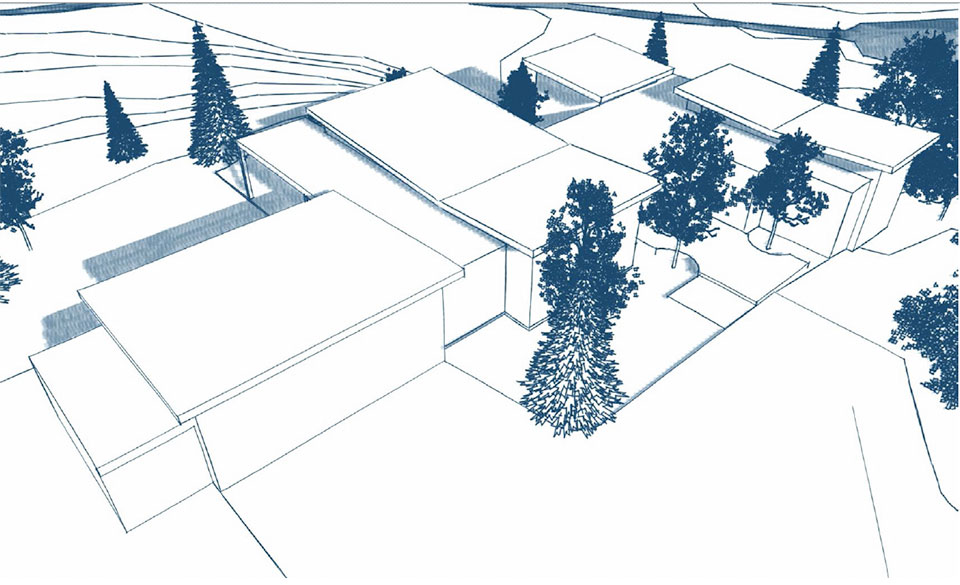 “We’ve done a few home/guest home projects wherein the clients opt for the guest house first so they can live on-site while we build the main,” says Chris Lee, Principal at Design Associates. “There are a few advantages including doing a test run on the ideas they want to incorporate into the main house and getting to experience the property for a time before finalizing decisions for the master plan. It also gets them here sooner as the guest house usually gets designed and built much faster.”

The Jackson-based architecture firm’s approach is one that guarantees viability. Lee’s first question is: “What do you want your house to be? We can do anything.” And then he shows you the entire process from the wireless device of your choice.

Lee and his team use a program called Graphisoft Archicad, model-based architectural CAD software, that enables the team and the homeowner to fully discern all the requirements of the lot and a build project—and all the possibilities. 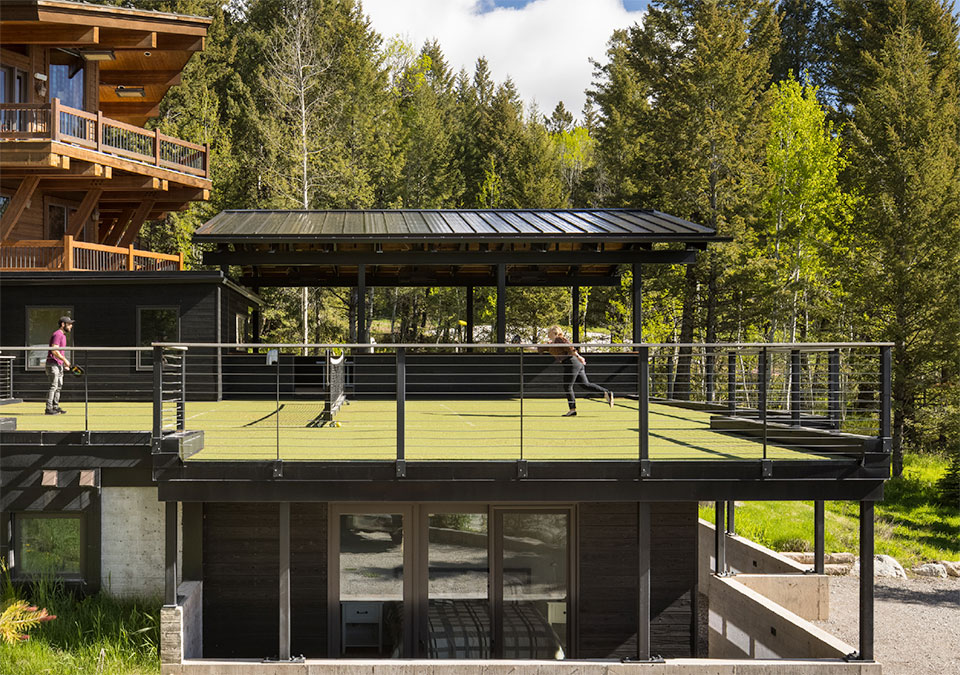 “By modeling our projects, we’re able to study and enhance them in ways that 2D just doesn’t allow,” explains Chris. “Not only does the added dimensionality help us better communicate ideas to clients and contractors, but the modeling also gives us the ability and confidence to dig deeper into designs and reduces the likelihood of errors and miscommunications. This makes for more efficient and better-designed projects.”

And it is critical that with a guest house project, the team be able to examine the smallest detail with precision because one thing is for certain, it’s typically not a lot of space to play with. “So, you have to be really thoughtful in the design to get all the function into the home,” says Lee. 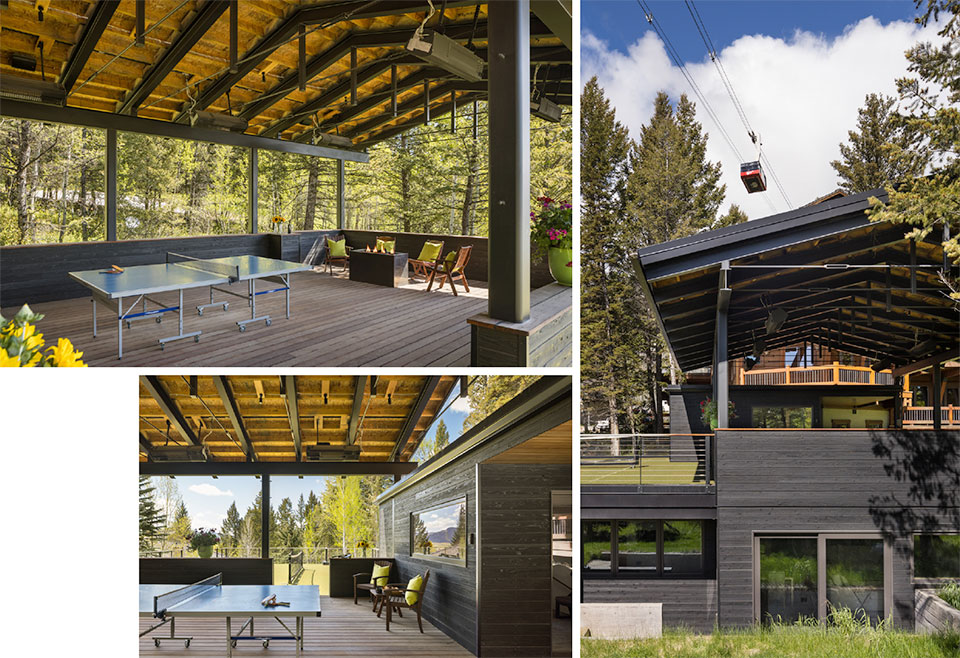 “Working with a new build gives you a blank slate so you can really optimize the layout, existing in some ways makes the design easier because you’re restrained and can lead to some design elements (hopefully good) you’d never have thought of were it not for the existing conditions—just like the main house, the site conditions really inform the design,” he adds.

Lee says you have to go into the project understanding the constraints of the HOA, and what the standard for square footage is for an auxiliary unit.

“Many HOAs have a minimum square footage standard to ensure the homes are of a certain size and the guest house is always less than that, so when we start with the guest house as the first phase of the building project, we often have to give them assurance that we’ll build a larger house on the property as part of the project to get design review approval from the HOA,” he explains.

Because a guest house is a boutique space in comparison to the main house, according to Lee, homeowners are more permissive with their design choices. “There’s something about the scale of the project that makes it less ominous for the owners when it comes to exploring finishes and features,” Lee says. “I think there’s also a desire to create something special for the guests, so they experience the greatness of a remarkable place like Jackson, right down to where they sleep at night.”

“In the two projects here, one is a ‘prototype’for the main house to follow. The owners are living in it to see what they like and gleaning from there if the same decisions will be incorporated into the larger residence that we are designing now. The character will carry over, so the buildings have an aesthetic relationship,” Lee explains.

The other project is a full departure from the main house as the owners were seeking something com-pletely new. “They actually wanted a very modern ‘cube’ design, but the zoning on their property had changed since we built their main home, and they no longer had the square footage in their allowance,” says Lee.

He adds that they needed to get clever to overcome the updated ordinance, saying, “We created a basement situation to exempt the new square footage but to do so, we needed a ‘floor’ above the new basement—we discovered that a rooftop deck counted as a ‘floor,’ which presented a great opportunity.”

That great opportunity was a pickleball court. “The pickleball court and ‘lawn’ were not part of the original program but came about when we realized we had an expansive flat roof as the consequence of the design solution. Because the home is located on a hill, the owners had limited flat space outside the home, so our new roof became a great outdoor space,” says Lee.

Due to the design solution of the pickleball court and outdoor area, Design Associates created a pocket of extra space that they could devote to the bedrooms, yoga room, and storage.

“The guest house itself is actually a studio apartment,” says Lee. “It’s all basement but has floor-to-ceiling windows in each room on the daylight side so it feels cozy and nestled into the ground, and not like a basement at all.”

The tight and subterranean style of the Hollister guest house is embellished with cedar ceilings, gray quartz cabinets, and custom bunk rooms to accommodate guests.

“The owners LOVE JH and JHMR; it’s almost their religion,” describes Lee. “They have a large and very active family and tons of friends who love to visit, so this was a great means to create more capacity during ski season.”

The guest house is 903 square feet with a 1,700-square-foot upper deck, making it a very spacious build into the hillside, but that seamless integration took a considerable amount of engineering. 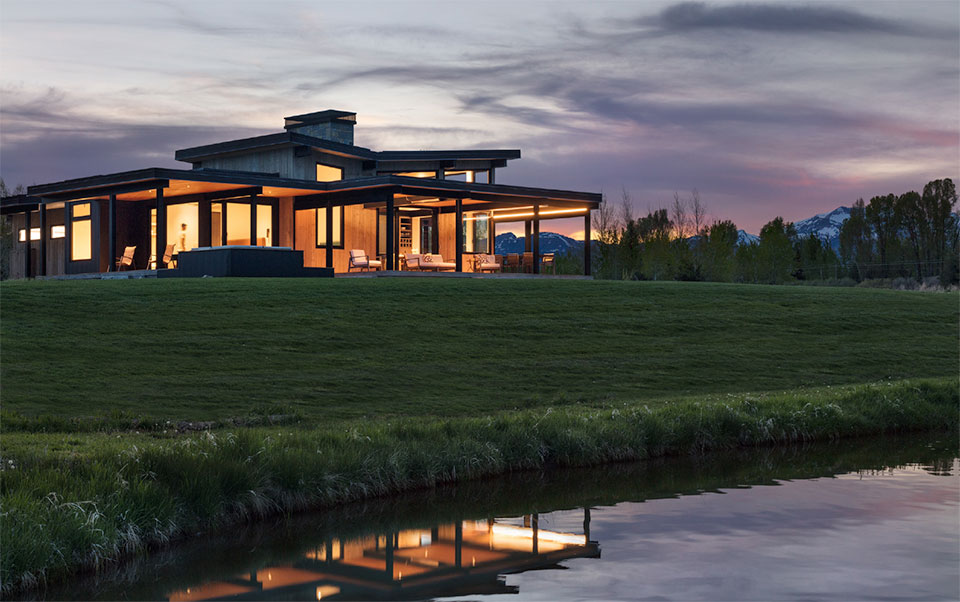 “Not only is it on a steep hillside, but it’s just below the main residence, which is 35 feet high and on a really large foundation. It’s also located in a ski resort where the snow loads are the highest in the valley,” says Lee.

But Lee says that all that aside, it’s just design criteria and there’s always a way. He also adds the caveat that with the building being partially buried, it is more energy-efficient at the ground and tends to stay close to 50 degrees throughout the year, keeping the space cool in the summer and allowing it to heat it in the winter passively.

The other guest house project is south of town and had entirely different considerations. The homeowners were looking for delicacy in a rugged environment. This guest house features a master bedroom with an ensuite bath and a bunk room, making it a short-term but impressive solution to the down-the-line construction project.

“The high windows in the living space add a lot of light as they are above the deck roof.”
-Chris Lee, Principal, Design Associates

“We devised a plan with the owners to create a small compound focused on their pond, the mountains, and a really nice and long valley view,” says Lee. The owners took inspiration from the Martis Camp in Truckee, California, for the roof forms, a style Lee describes as being made up of voluminous, light spaces and shed roof forms.

“It’s a great style that balances new and old, which feels appropriate for these guys and works well with their property,” he shares. 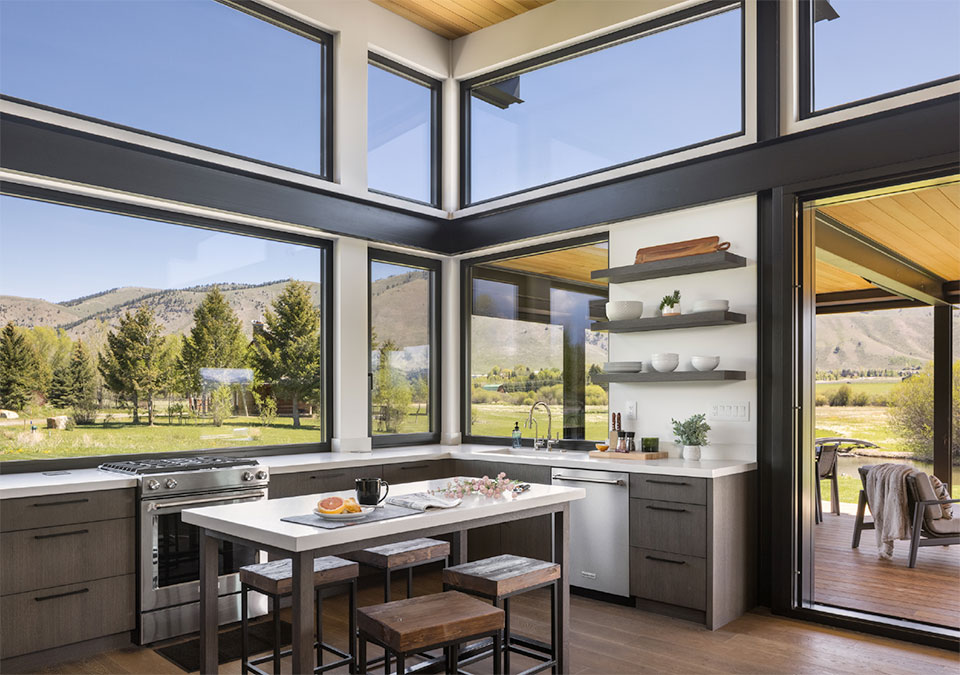 What this property does share with the Teton Village guest house is a full embrace of outdoor space. “By county standards, we’re limited to 1,000 square feet enclosed habitable space, so we added 1,000 square feet to the deck, increasing the livable space for the home considerably,” Lee says.

The relationship between outside and inside is amplified with Design Associates’ choice to install huge accordion doors to be opened on nice summer days. The expansive and functional outdoor living area was a remarkable solution for the CCR codes of the subdivision where limits were set on guest house size. The deck itself is ipe wood with a muted red tone to mirror the soffit above. Ipe is a durable deck material that is well suited for the abrasive winter climate in Jackson Hole.

The views of the South Park guest house are an unobstructed panorama of Munger Mountain—which also means unhampered views for sunset as well.

Lee says, “The high windows in the living space add a lot of light as they are above the deck roof.” The effect is an expansive view that invites the splendor of Wyoming to flood the interior.

The massive kitchen window is made up of four separate units with a total size of 13 feet wide and 11 feet tall. And surprisingly, the majority of the build was done while the clients were out of town, and facilely.

Design Associates’ capacity to provide a virtual and augmented reality of the build with their Graphisoft Archicad program for clients kept all of the team members on the same page at the same time throughout the entire process—and led to success.

Lee says that most firms do not let technology drive the medium or include their client in every step of the process. “I want them to be a part of it. I am a tool to help them realize what they’re looking for,” he says. “The 3D modeling services we provide were especially helpful…allowing us to test different materials with the clients first before committing to the final choices,” adds Chris Mientjes, Project Manager, Design Associates Architects.

The attention to detail makes this guest house competitive with a 7,000-square-foot chalet. There is not one inch of wasted space or a forfeited view. The goal to balance the structure with the natural landscape in its entirety, from the windows to the garden to the fireplace, certainly blurs the line between inside and outside—making the experience of staying overnight not just lodging. 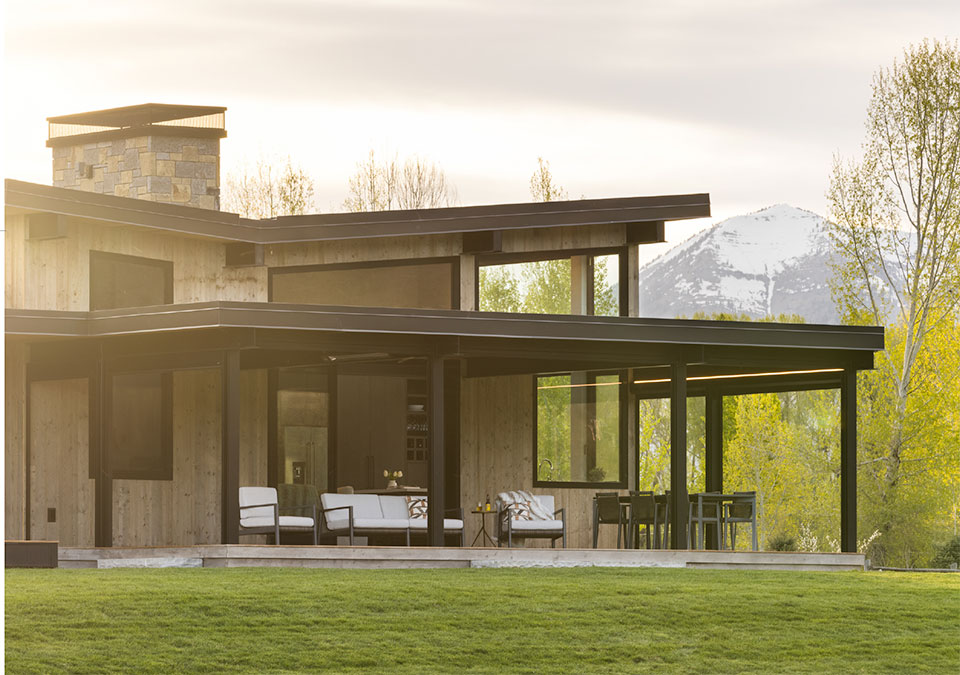 “I think a lot of people coming here appreciate the value of having a good, comfortable home base from which to start the day’s activities.”
-Chris Lee, Principal, Design Associates

“Most of our clients like the idea of a small place for guests or in-laws where they can have their own established space, connected but still independent of the main residence,” explains Lee. “I think a lot of people coming here appreciate the value of having a good, comfortable home base from which to start the day’s activities and they want to extend that amenity to their guests.”