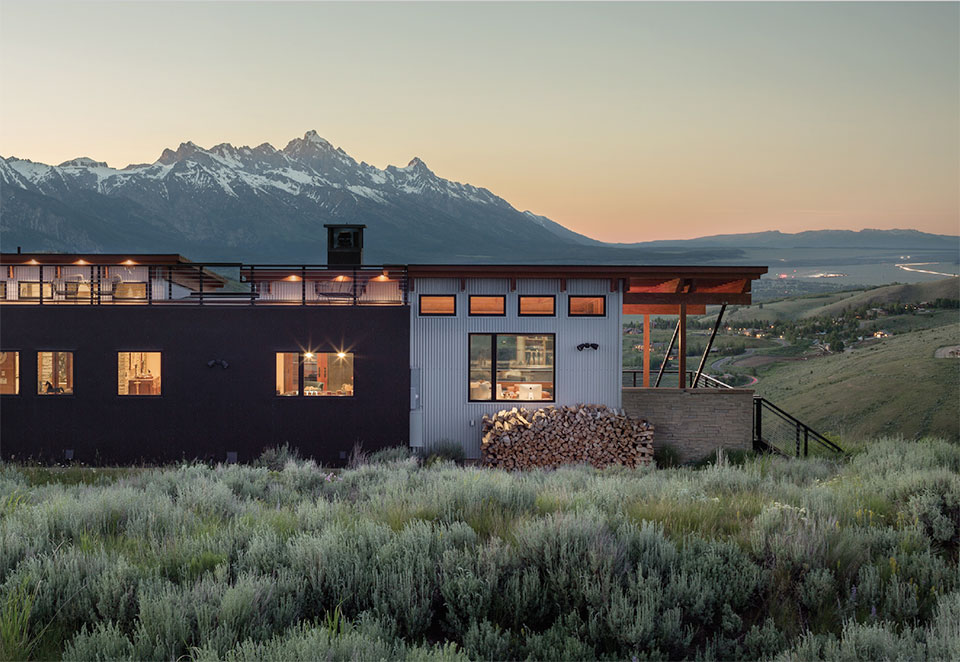 A Residential Experience That Reaches for the Sky 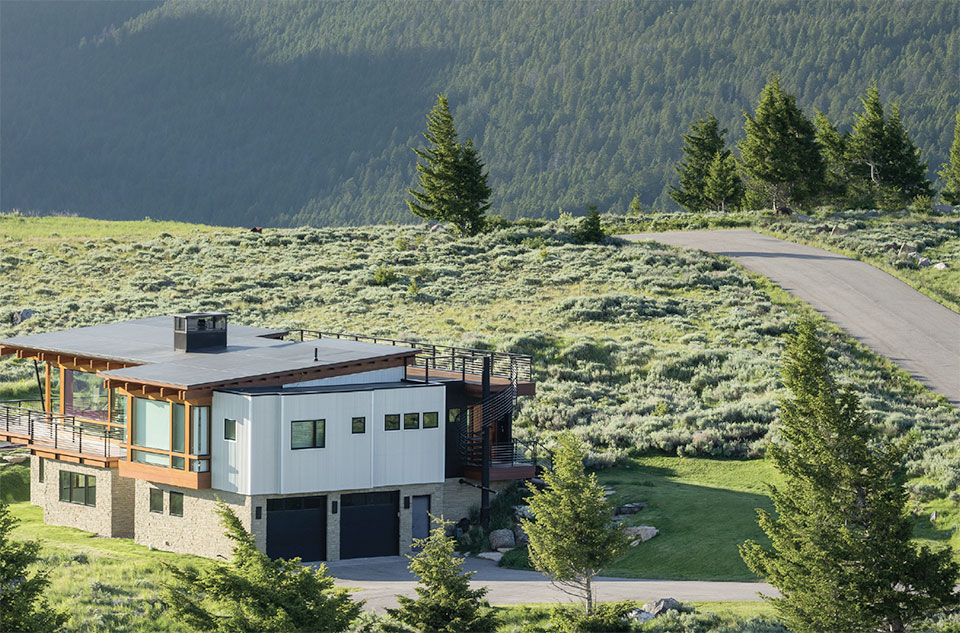 At 1,000 feet above the town of Jackson, it’s easy to see that this private neighborhood is the pinnacle of luxury and mountain lifestyle for the Yellowstone Plateau. The only thing grander than the location is Chris Lee’s vision for how to live atop the butte. 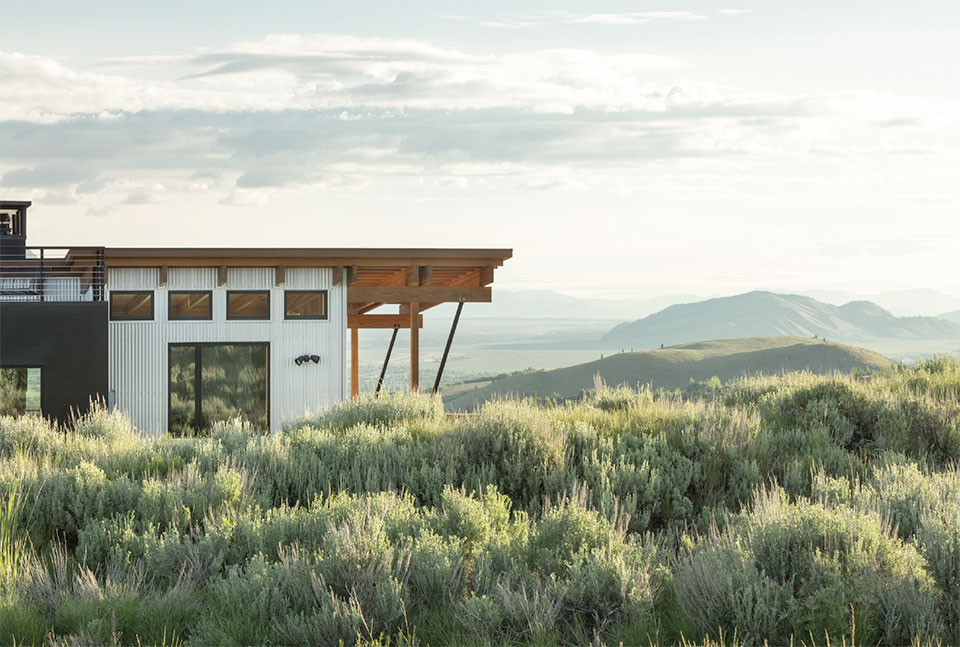 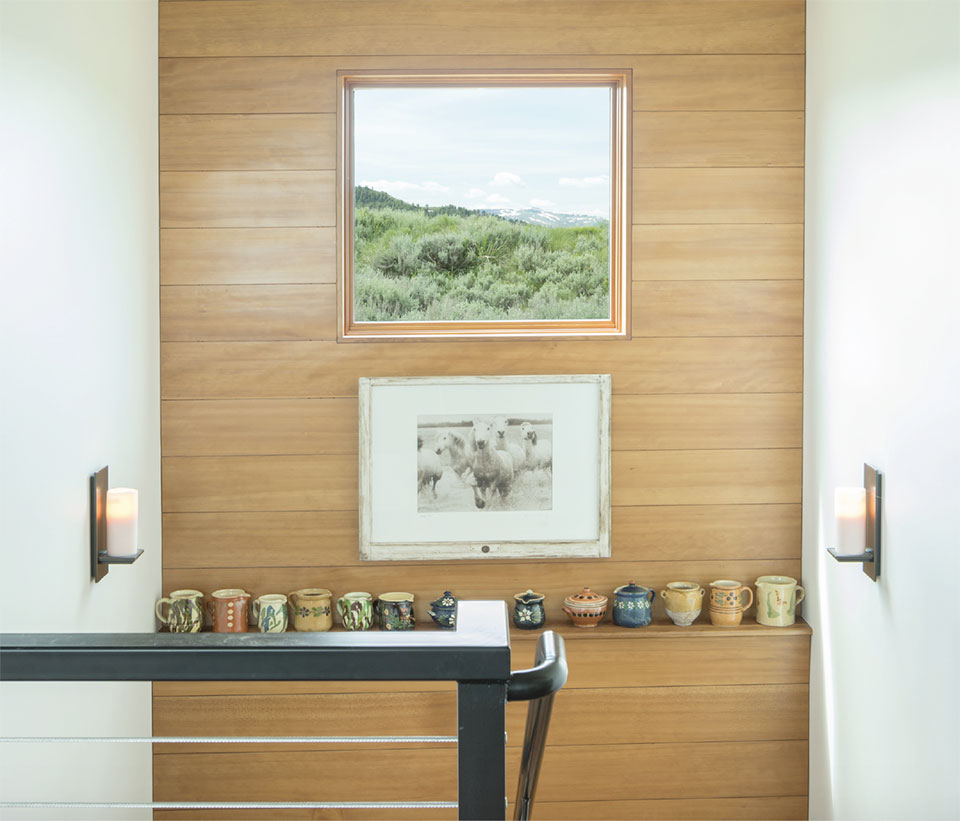 “Above Jackson” was how the saddle butte’s original owners and developers were listed in the phone book. The local description has not changed much from yesterday to today, but the price tag has. In the original owners’ day, lots were sold for $17000. Today the average price tag is over $3 million dollars.

“She loved being in the mountains and wasn’t intimidated by the long road up Saddle Butte.”
–Chris Lee, Principal Architect, Design Associates 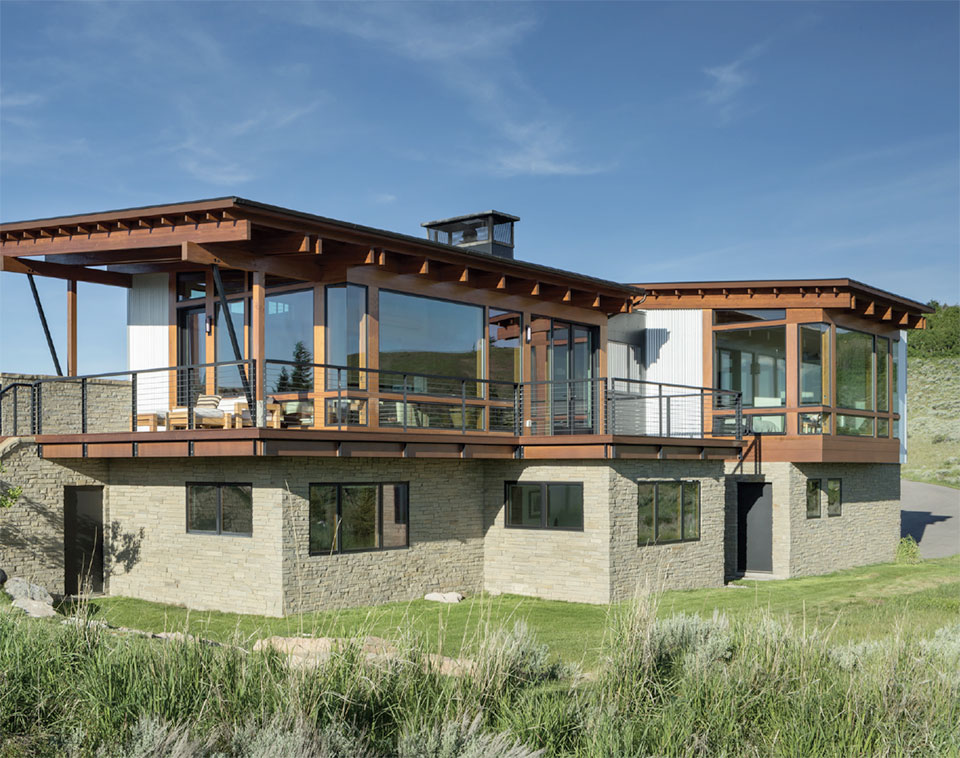 What is it about Saddle Butte that makes it so attractive? It might be the sunrise over the Cache Creek drainage or the closeness of the moon when it ascends. Maybe it’s the abundant wildlife or maybe it’s the 360-degree views of the Snake River Range, the Cathedral’s silhouettes from Grand Teton National Park, or the eye-to-eye view with Jackson Hole Mountain Resort. Whichever attribute resonates the most, there’s no argument that this location offers a sky view on Jackson Hole.

In 2010, Lee, Principal Architect and owner of Design Associates, was tasked with a challenging lot and a client’s vision for big views and simple living. Lee says that the client left it to him to design a home that took in the views, featured a great floor plan, and offered comfortable guest rooms for her grown children. “She loved being in the mountains and wasn’t intimidated by the long road up Saddle Butte,” says Lee. 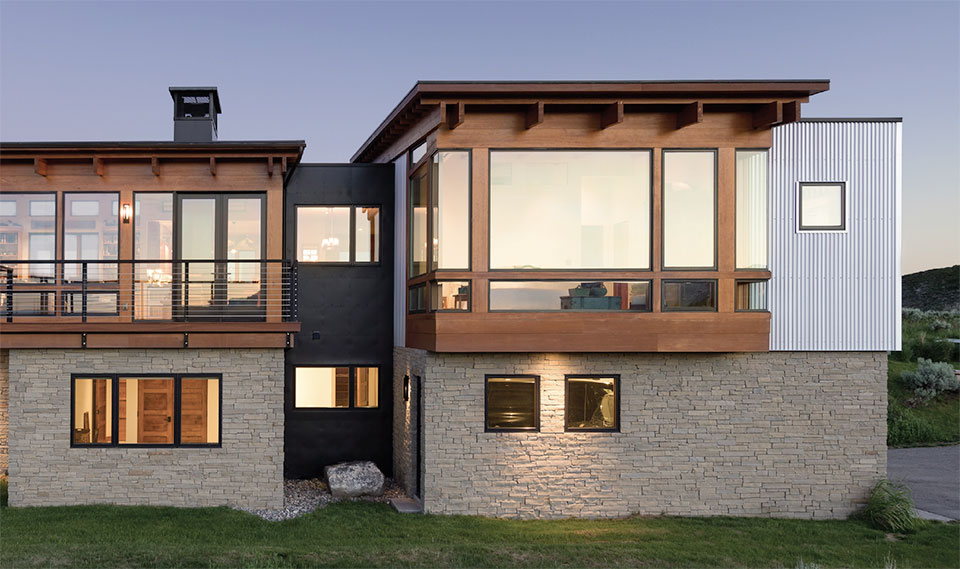 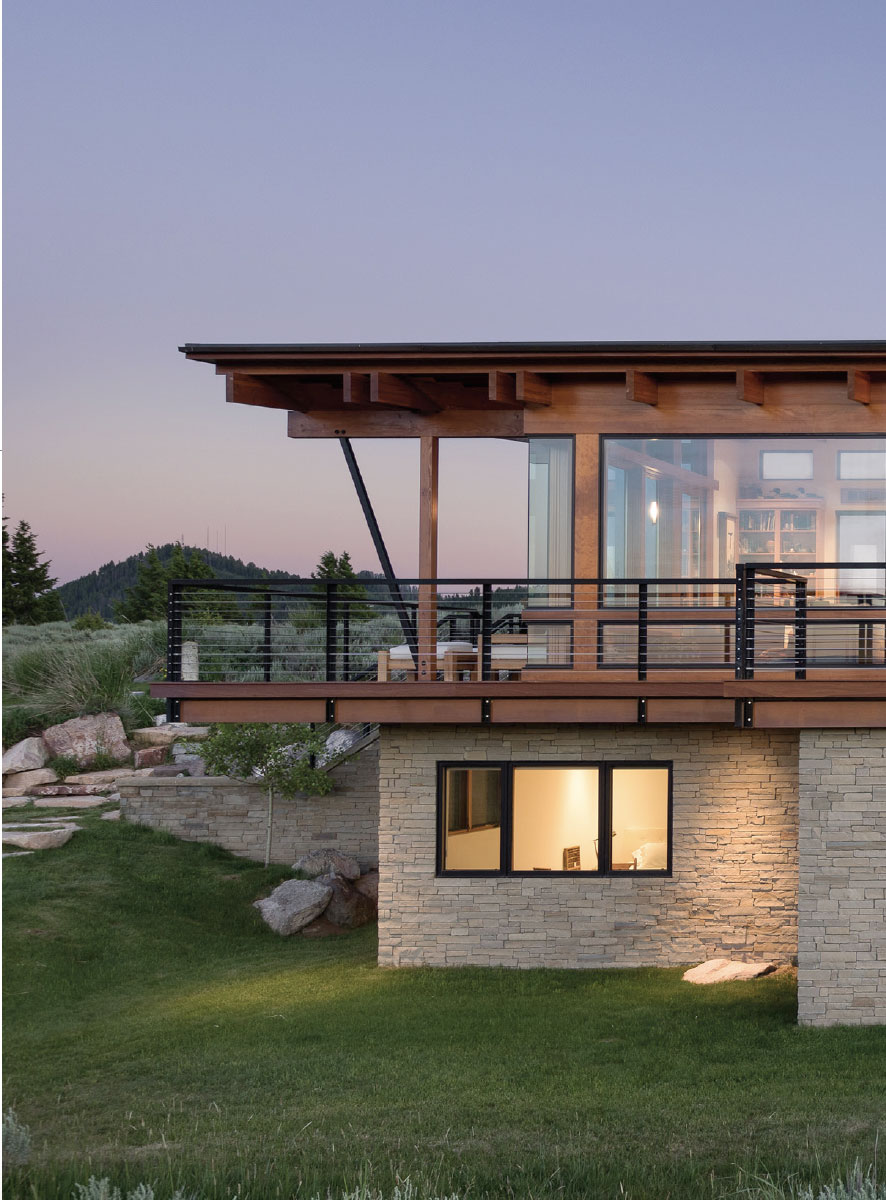 The 3,048-square-foot house was built by John Jennings and Peak Builders. “The rooftop deck is my favorite. Hanging out there on top of the world is a special spot and truly one of the only homes in the Jackson area with a 360-degree view. It’s quite spectacular,” says Jennings.

“Having true corner windows really helps capture (and I say this with all sincerity) the unparalleled views, arguably the best anywhere in the U.S.”
–John Jennings, Peak Builders

“It blends in well with the landscapes and the flat roof pitch allows for real subtlety. Working with Chris Lee is always a pleasure. He is a fantastic architect. Having true corner windows really helps capture (and I say this with all sincerity) the unparalleled views, arguably the best anywhere in the U.S.”

According to Jennings, the house is very light and cheerful with no “heavy” feel to it, proving that small homes are more than suitable for capturing the mountain luxury lifestyle. To execute all of that, Lee took every detail and layer of the house into consideration; literally every corner was given special consideration. 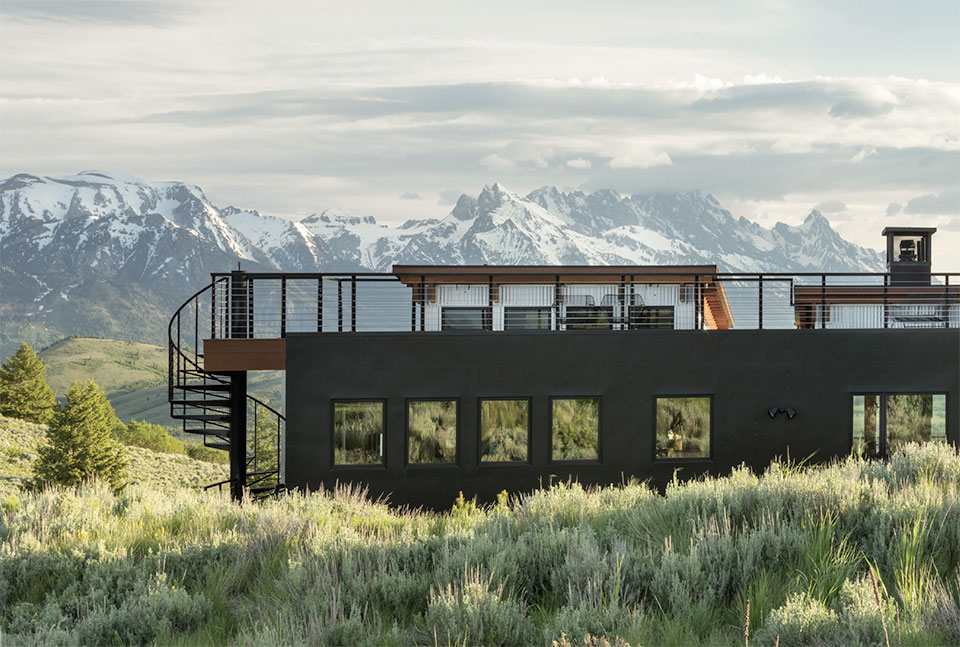 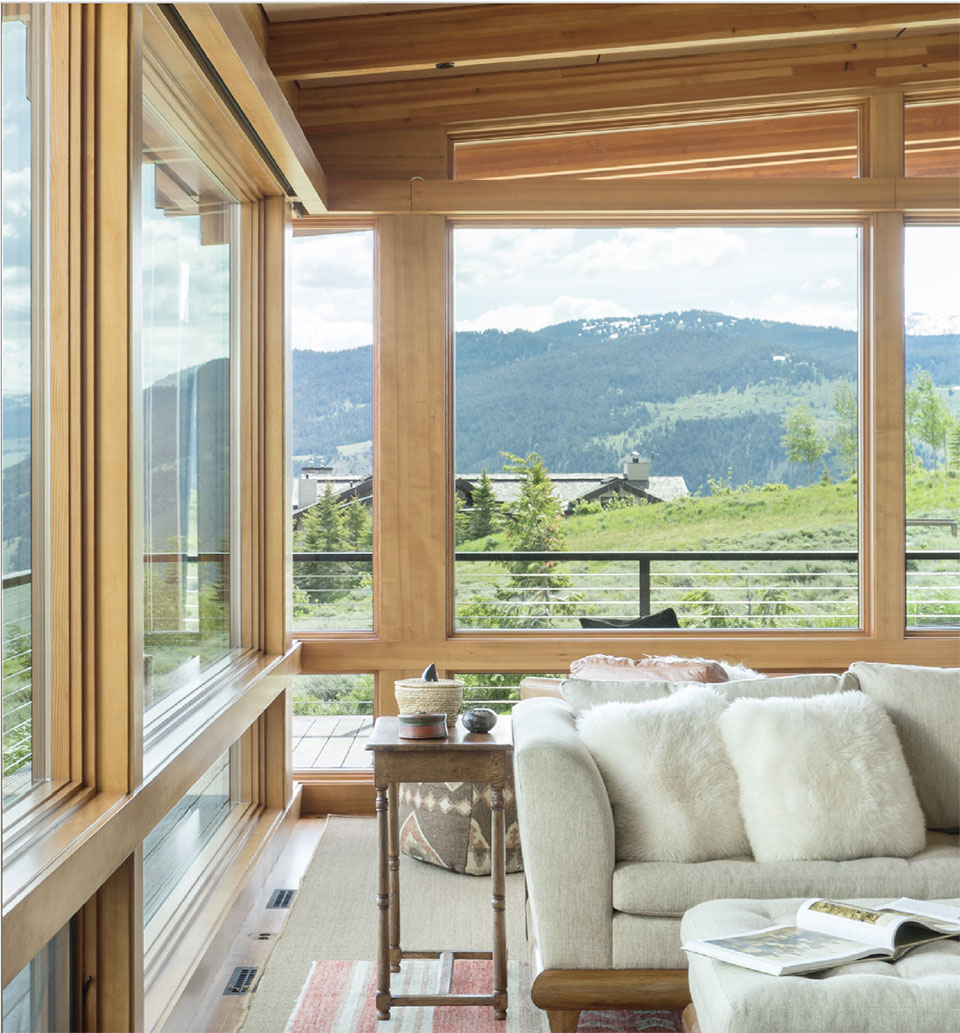 The lower floors are concrete that is buried into the hillside and framed with a cut stone veneer where it daylights. “There’s lots of glass, and where we do show wood, it’s white birch and cedar with stain. The soffits are hemlock and the upper roof is EPDM membrane with an Ipe deck,’’ explains Lee.

On the inside, the house features a great room that opens out onto terraces. A freestanding fireplace featuring black metal cladding and niches for wood or décor divides the dining area and runs perpendicular to the kitchen. The original owner found a chandelier that appears like a collection of glowing candles, adding an earthy and warm effect to the already organic lighting design.

Complementing the walnut floors, clear cedar runs throughout the house as paneling in the hallways. Built-in storage can be found throughout the house, offering suitable spots for the many needs of mountain living. To accentuate the light for rooms on the bottom floor, frosted glass panels were used instead of solid doors. 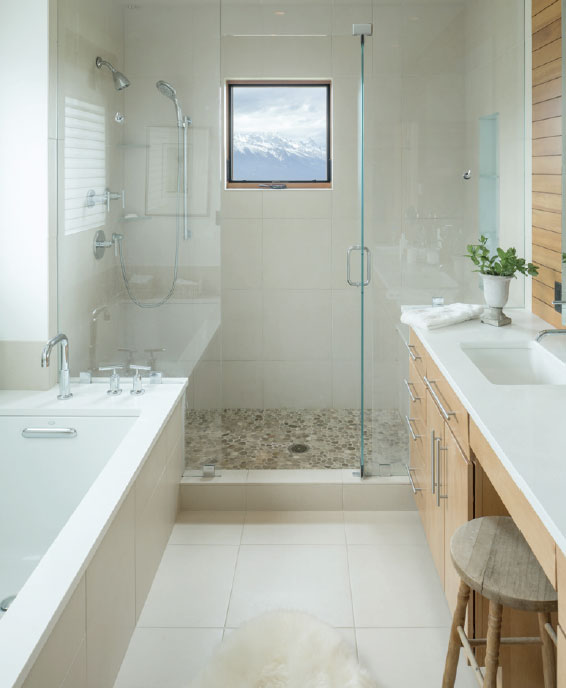 “This house was built before the Fenestration Ratio came into effect, so there are more windows in this house than what’s being built today; somewhere between 30-40% of the house is windows,” says Lee. The glass was sourced from Peak Glass. “We used top-quality windows, and with the house being super-insulated, the home is incredibly energy efficient despite the size of the windows, he continues. Lee says the windows and the rooftop deck are the highlights of the house’s design for him.

“We did corner glass windows in the great room and master bedroom. They’re both just super cool and were a bit of a technological challenge but the result is outstanding. From the inside, the intersection of the two windows is invisible but from the outside, you see a mullion,” Lee explains.

Though the Butte is a windy place on more days than not, the rooftop deck offers a panorama of the Jackson Valley that has no competition, except maybe from the summit of the Grand. “It was a great spot to view the total eclipse a few years ago,” says Lee. 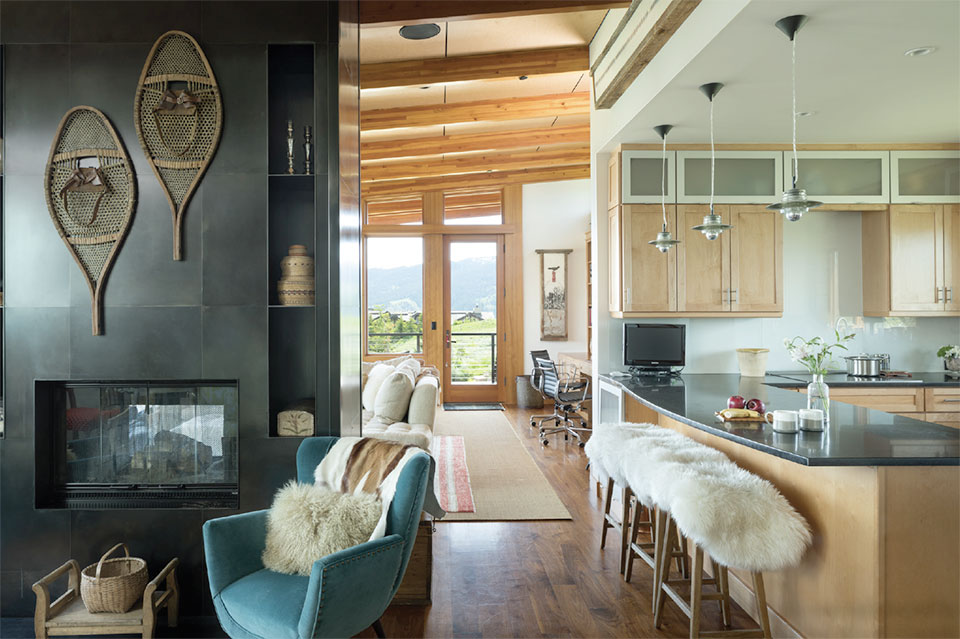 By night, the house has a lantern effect from deliberate but simple decisions made by Lee in the interior design. “It’s relatively simple and basic lighting but we used recessed cans wherever we could, along with dropped ceilings and mono points where we had vaulted ceiling area.” Lee says that these days they can put recessed LEDs in the vault but that feature has only just recently become available. “On the exterior of the house, we have sconces. The warm tones on the interior amplify the lighting to give the place a lantern-like effect at night,” says Lee.

“The warm tones on the interior amplify the lighting to give the placea lantern-like effect at night.”
–John Jennings, Peak Builders

One of the things Lee remembers most about the 18 months of construction was the owner’s desire to participate in the build process. “She was here for the build, which was a lot of fun. I have a shot of her helping with the foundation,” says Lee.

In addition to the powerful views that surround this home, the energy put into the design and build process can be felt in this Skyview masterpiece. Its subtle beauty tries to be anonymous amongst some of the most recognizable peaks in the country. The house rises above Jackson in every way.