Reclaimed Lumber: The Convergence of Beauty and Sustainability Partner Website

There was a time when wood was the most ubiquitous building resource in the United States; it was strong, affordable, and plentiful. There was a time when forests were packed with trees hundreds of years old. Varieties of oak, redwood, maple, chestnut, walnut, hickory, pine, fir—the possibilities were endless as were the resources. Or so it seemed at the time. As demand for lumber increased across the country in the 19th and early 20th centuries, our forests paid a heavy toll.

Today, with only four percent of our country’s old-growth forests remaining, old-growth lumber is a highly valued resource because of its beauty, quality, and strength. To procure that kind of lumber today, we have to go back to the source—well, the source we have left anyway: old barns, mills, fences, and other structures built when old-growth was plentiful. 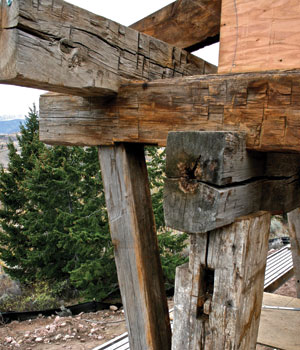 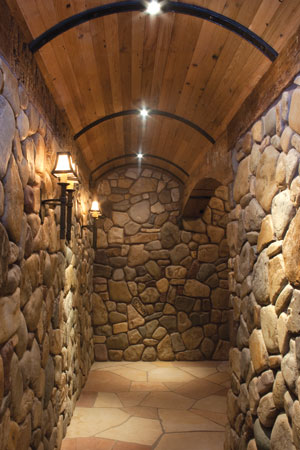 A smattering of companies began to specialize in reclaimed lumber as early as the 1970s. However, it wasn’t until 1990 that the popularity of reclaimed lumber shot up. This upsurge was due to three fundamental factors: the lack of natural supply of old-growth lumber, the economic advantages in deconstructing older structures for the reuse of lumber, and the fact that reclaimed wood added certain aesthetic qualities that people began to seek. With the culmination of these factors, the reclaimed lumber trend was born. And lately, that trend has been energized because of the rising commitment to sustainable building practices.

As one of the preeminent lumber retailers in the Northwest region, Hank Adams of Buckeye Hardwood and Lumber knows a thing or two about the rising popularity of reclaimed wood. Having completed innumerable orders for wood of the “antique” variety, he is proficient at sourcing quality wood. “Every antique wood order we do is a custom order from a builder, architect, or designer,” he says. “If a designer comes to me asking for a replica of a certain floor we sourced the wood for, we’ll do our best to locate something that looks exactly right. But,” he adds, “matching is the hardest part. With reclaimed wood, no two floors look alike. And that’s the beauty of it.”

When one of his several sources finds just the right structure to match the order, Adams can choose to either have the wood prepared near the source or at the Buckeye facility. Usually, the wood is prepared near the source to keep the shipping costs down as there is a good amount of waste when dealing with reclaimed lumber; only the best wood can be salvaged. “When you purchase reclaimed wood,” says Adams, “you are paying for the process. The value in the wood is in the labor to tear down the barn, sort the wood, then de-nail it, dry it in a kiln, and machine it. It’s a lot of work.”

Recently, Adams reclaimed two 100-year-old white oak beams for a custom order. The beams passed the tests with flying colors for structural viability even after having been under pressure for that many years. Adams believes that the durability of the wood, especially the hardwoods, is what puts the “sustainable” into reclaimed wood. “Of course,” says Adams, “the aesthetics of the product are very compelling, but when something can outlast the original structure itself, and then be removed to be used somewhere else, that is a truly sustainable product.”

As one of the few builders in the greater Yellowstone area to employ a LEED-certified consultant, Tim Glick of Dynamic Custom Homes applies his skills in sustainable products and methods through both the design and construction processes. Despite having completed about a dozen projects involving reclaimed lumber, he does not have a favorite. “There is not one that stands out for me as each project was so different. They all have unique qualities and unique material that I was able to source. They’re all very cool and different.” 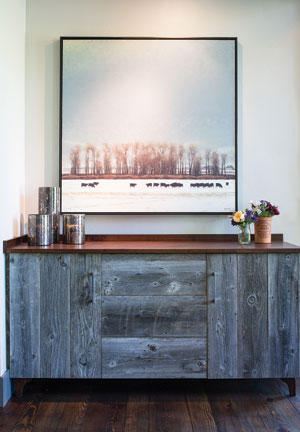 Glick has even built homes that were completely finished with reclaimed wood. “The interior, exterior, siding, floors, cabinets— you name it,” he recalls. But he does say that when utilizing a large quantity of wood, it is imperative that there is a balance in the design. “Sometimes when there is an abundance of reclaimed wood, the house can tend to look masculine. The design needs to foresee this and balance it with lighting, window placement, and other materials.”

Other challenges that arise when working with reclaimed lumber? The time frame of sourcing the materials, making sure that the wood will be a good match for the design, and then making sure that there is enough of it. “It really is a labor of love. You need to be able to dedicate your time in searching for the wood. It’s great when you have an idea in your head and you put the time in to hunt for it and then find it.” Fortunately for Glick, he is up for the challenge. “Sourcing the material, trying to visualize how it will look, talking to the guys who are taking the barns down—it’s all part of the hunt and it’s all part of trying to put the entire puzzle together. That’s what I love about it.”

For Kate Binger, owner and lead designer of dwelling, a boutique gift, furniture, and interior design studio, her favorite aspect of working with reclaimed lumber is the quality of its texture and the depth it can add to a project. About using reclaimed wood in her projects, Binger says she receives overwhelming approval from her clients. “It may just be a small accent with furniture or a feature architecturally—walls, ceilings or beams,” she says. “For me, designing is like a puzzle, and I enjoy assisting clients to place the pieces together.”

“Sourcing the material, trying to visualize how it will look, talking to the guys who are taking the barns down––it’s all part of the hunt and it’s all part of trying to put the entire puzzle together. That’s what I love about it.“ Tim Glick, Dynamic Custom Homes

With so many clients wanting to use reclaimed lumber in their homes, it’s apparent that the demand for this sustainable material is high. Binger agrees. “It’s an ongoing trend, for sure. I am always looking for sustainable resources and reclaimed wood speaks to this. Creating new from the old is evidence of humanity’s ingenuity.”

Creating new from the old is precisely what she did with her favorite project in Wilson, Wyoming. “We used reclaimed wood to wrap an existing bar and kitchen island to ensure coverage of beadboard and transform the existing transitional design. I capped the reclaimed wood in steel with a blued finish; the juxtaposition of the textures added depth to the room. It was clean, simple, and beautifully delivered.”

Merle Adams of Big Timberworks in Montana is part of “a coalition of log building Gypsies.” He and his fellow timber Gypsies began to see a need to find another source for old- growth lumber in the late 1980s and bought their first loads of reclaimed lumber in 1990. Today he goes through at least 24 semi loads per year. Adams and his team at Big Timberworks are talented craftsmen who understand that working with reclaimed lumber is about more than just getting better quality than recently harvested lumber; they also relish in the role they play in living history. “We are a part of carrying on the legacy of a building,” says Adams. And then he talks about some of the projects they’ve given new life to. “The ‘River Timber’ projects are a neat story. During the early 20th century, large Douglas fir timbers were harvested from British Columbia and shipped via railroad across Canada. Chained together end-to-end, these timbers were used as floating sidewalks that ran the length of great rivers so that smaller pulp logs could be shipped to the sawmills. The log sidewalks kept the logs in the main current and allowed men to access and free up log jams. Using these logs in many of our Big Timberworks projects has been a highlight.” 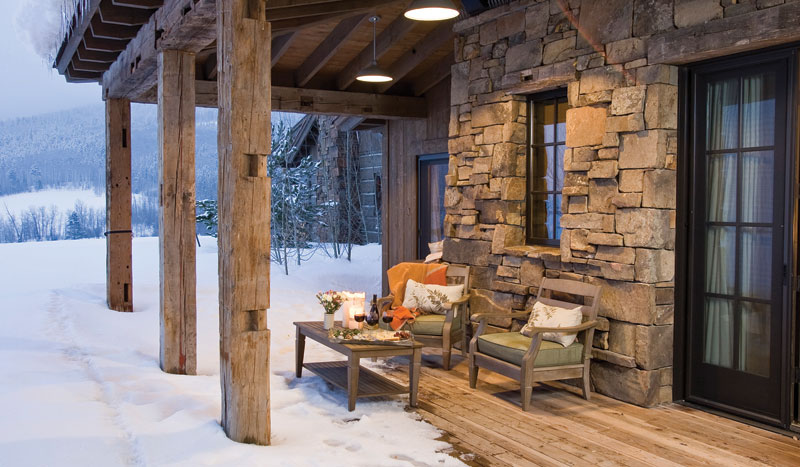 Big Timberworks has given a new life to old sawmills, old barns, grain silos, water towers, car factories, and even an old Trojan condom factory from New Jersey. Adams says with a laugh, “Yes, that one doesn’t have quite the romance of some of the others, but some of our customers get a kick out of the history of that wood.”

All in all, Big Timberworks has purchased thousands and thousands of truckloads of quality timber with long and interesting histories. Adams says, “Some people want to use reclaimed lumber for the quality, others for the look, and still others, well, they like that their ‘new’ house has a history to it. You can’t really put a price on that.”

Adams laughs when he says, “You know how buying jeans with holes and t-shirts that look ten years old is cool now? People seem to want something with a little wear and tear. Well,—(and he says this with a wink)—we’re the guys that started that.”

The bottom line is that reclaimed wood is more than a trend, it’s a nod to history, it’s an acknowledgement of our limited resources, and it’s a highly-sought after design look. The people who source the materials and the people who put the projects together create one-of-a-kind architectural works of art. Consider what would happen to that wood if it weren’t being recycled. It would probably end up in the nearest landfill. Hopefully, with its continuing demand, that won’t ever be the case. While reclaimed lumber may cost more, according to those who work with it and those who live with it, it’s definitely worth the price.