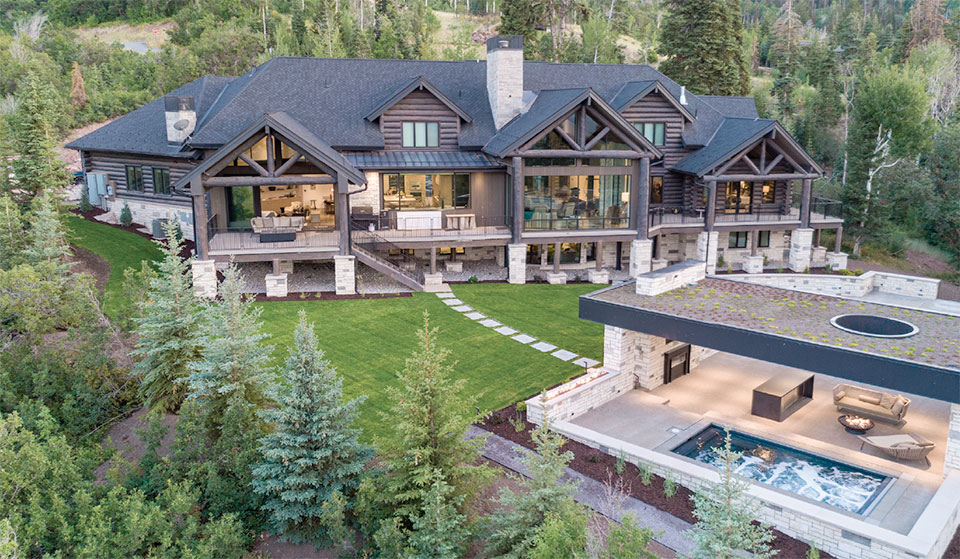 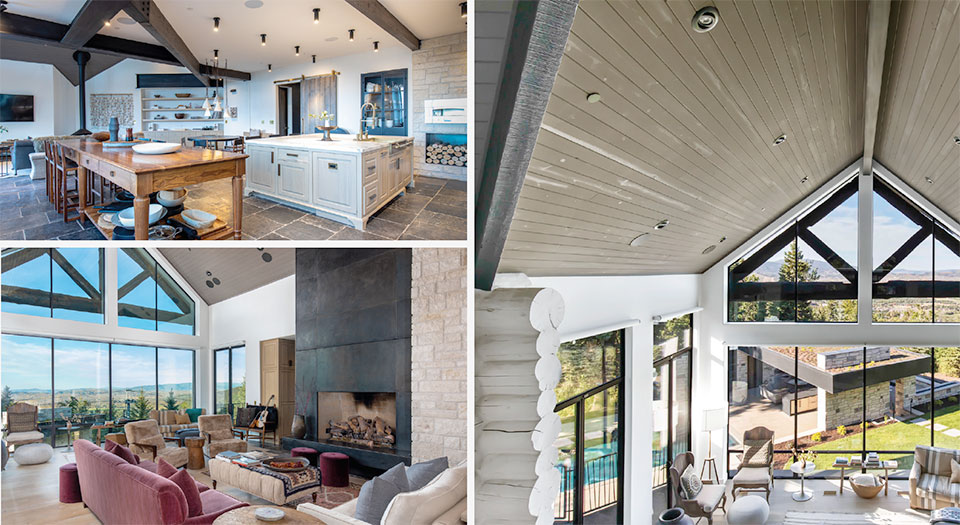 Renovation demands an acute sense of spatiality and imagination. It requires wisdom and expertise in transforming spaces from dead and dreary to luxurious and livable. And perhaps, most importantly, it presupposes a relationship between architect and client founded on trust.

To envision what can become is to trust and believe in the talents of Scott Jaffa and his highly-skilled architecture and construction teams and loyal group of collaborators, artisans, and tradespeople. Jaffa’s deep commitment to the process comes from nearly three decades of designing and building unparalleled homes throughout Park City and its environs. As a result, his clients trust his multi-talented capabilities. They also trust his instinct, which is embedded in a recent renovation project on White Pine Canyon in the Colony that began humbly with a request to remodel the kitchen and eventually developed into a total metamorphosis.

The approximately 12,000-square-foot log cabin sited majestically with expansive views on six acres near the Timberline chairlift was, at best, an example of the dense and traditional late ‘80s vernacular. It had seen its day and was ripe for a transition from clichéd to cutting-edge. Jaffa’s client, a down-to-earth California couple for whom entertaining, specifically cooking for large gatherings of family and friends, brought them daily joy, wished for a home that echoed their laid-back yet spontaneous lifestyle. After the requisite discussions, buoyed by creativity and innovation, Jaffa got to work, both inside and outside. His intuition asked: “How do we make this relevant and updated and hip but respect what was there?”

On the inside, it started with that kitchen.

“The whole design centered around the kitchen and making it bigger for entertaining because they generally have 20 to 30 people in their home at any given time,” says Jaffa. “I decided to push the whole house out 10 feet. This was not an easy task for a log house, but it gave them what they wanted and needed.” He adds, “And then, there were the things we ran into, like the logs having shrunk on the outside. The beams were out of level by as much as three to four inches.” Those inches instigated jacking up the house. “It took time to get the structure dialed in; honestly, I was afraid the house was going to fall down.” 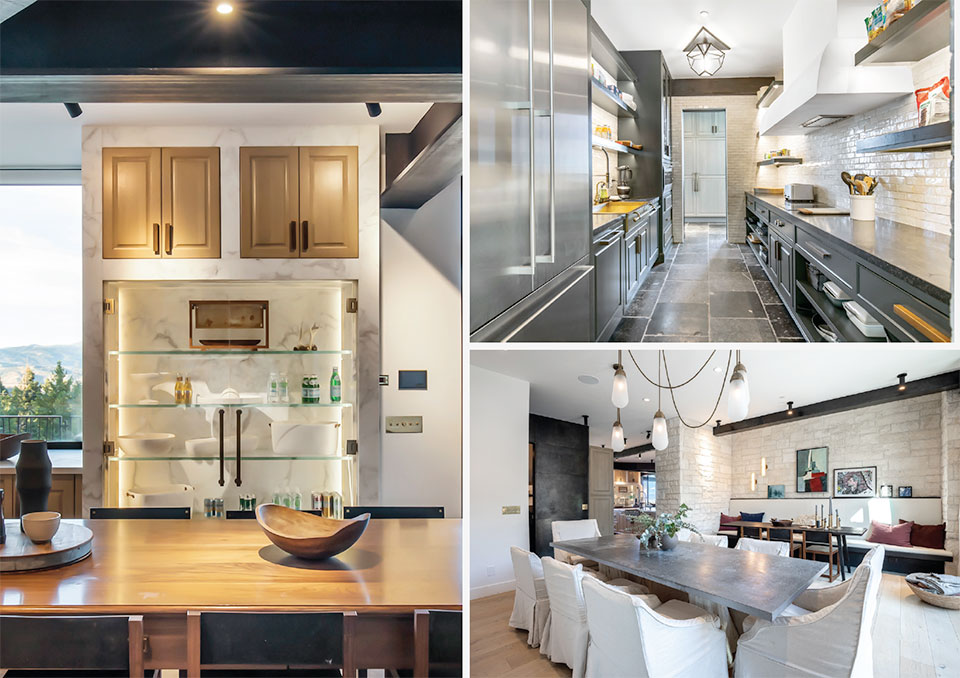 “I decided to push the whole house out 10 feet. This was not an easy task for a log house, but it gave them what they wanted and needed.”
–Scott Jaffa, A.I.A., CGP, CEO/Architect, Jaffa Group

After it was framed and the living room gained the necessary space, Jaffa amplified the views by installing steel windows with maximum glass and minimal frame. Next, he continued his quest by opening up the main floor and transforming the challenging space (think mammoth stone fireplace and colossal-sized logs) to one with a sleek steel fireplace that wraps around the walls and then exits behind kitchen cabinets. “I treated it as its own element, almost like a cube in the middle of the house.” That key move bound the structure and its textures effortlessly, especially since Jaffa juxtaposed light and dark limestone with the freshly white-washed logs. The power in the unexpected clearly changed the interior space.

But let’s step outside for a moment so we can enter. “The exterior was what it was; there wasn’t a lot we could do, so we sandblasted the house with walnut shells. It went on for weeks because there are a lot of logs on that house!” The shells removed the paint, stain, and sealer to get the good gray color Jaffa was looking for; additionally, this technique was safe for the environment. Then he addressed the garages. 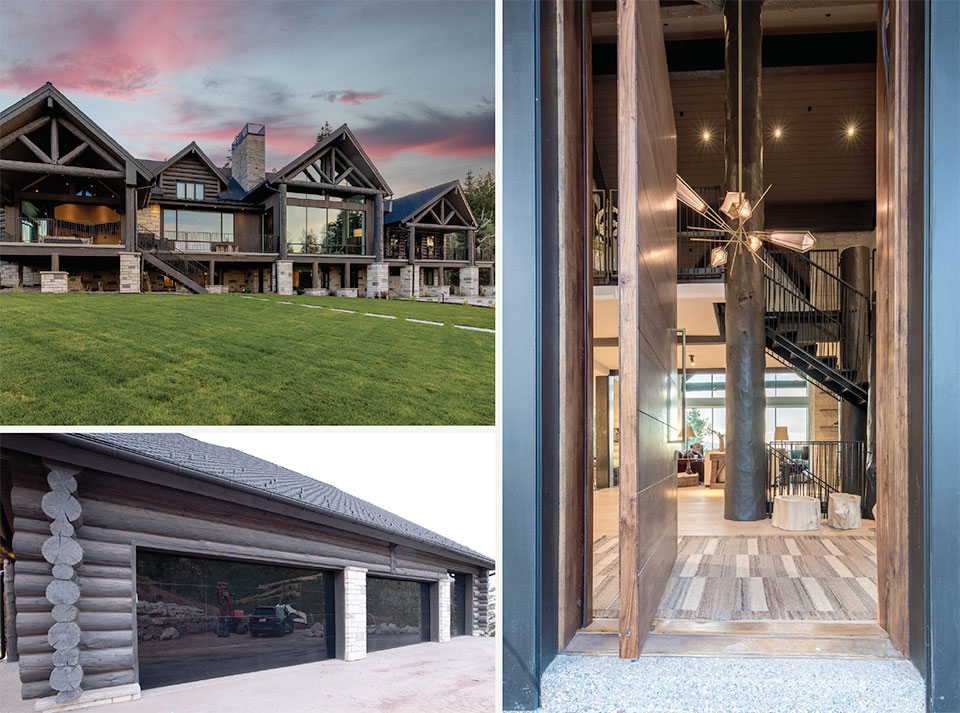 “There were certain areas I could touch and open up. I took the entry wall out and made it glass and wood. I wanted a bigger door because the windows were small on the front of the house.”
–Scott Jaffa, A.I.A., CGP, CEO/Architect, Jaffa Group

“The garage doors were such a massive element of the house,” he explains. Jaffa reimagined the three dated wood doors in gorgeous black glass. The cumulative effect of the glass defines the proportions. It highlights the architectural distinction with the interplay of the circular forms in the logs and the linear sheets of glossy obsidian. Next, the entrance.

The former log cabin’s entrance lacked invitation, and there was little that welcomed introduction to its interiors. “There were certain areas I could touch and open up. I took the entry wall out and made it glass and wood. I wanted a bigger door because the windows were small on the front of the house,” shares Jaffa. He eschewed the familiar for the exceptional when he elected to choose an oversized pivot-hinged front door, which established the scale and connection to the home. The megawatt entrance is validated again by a custom aubergine glass chandelier that sets the home’s warm and sophisticated tone. 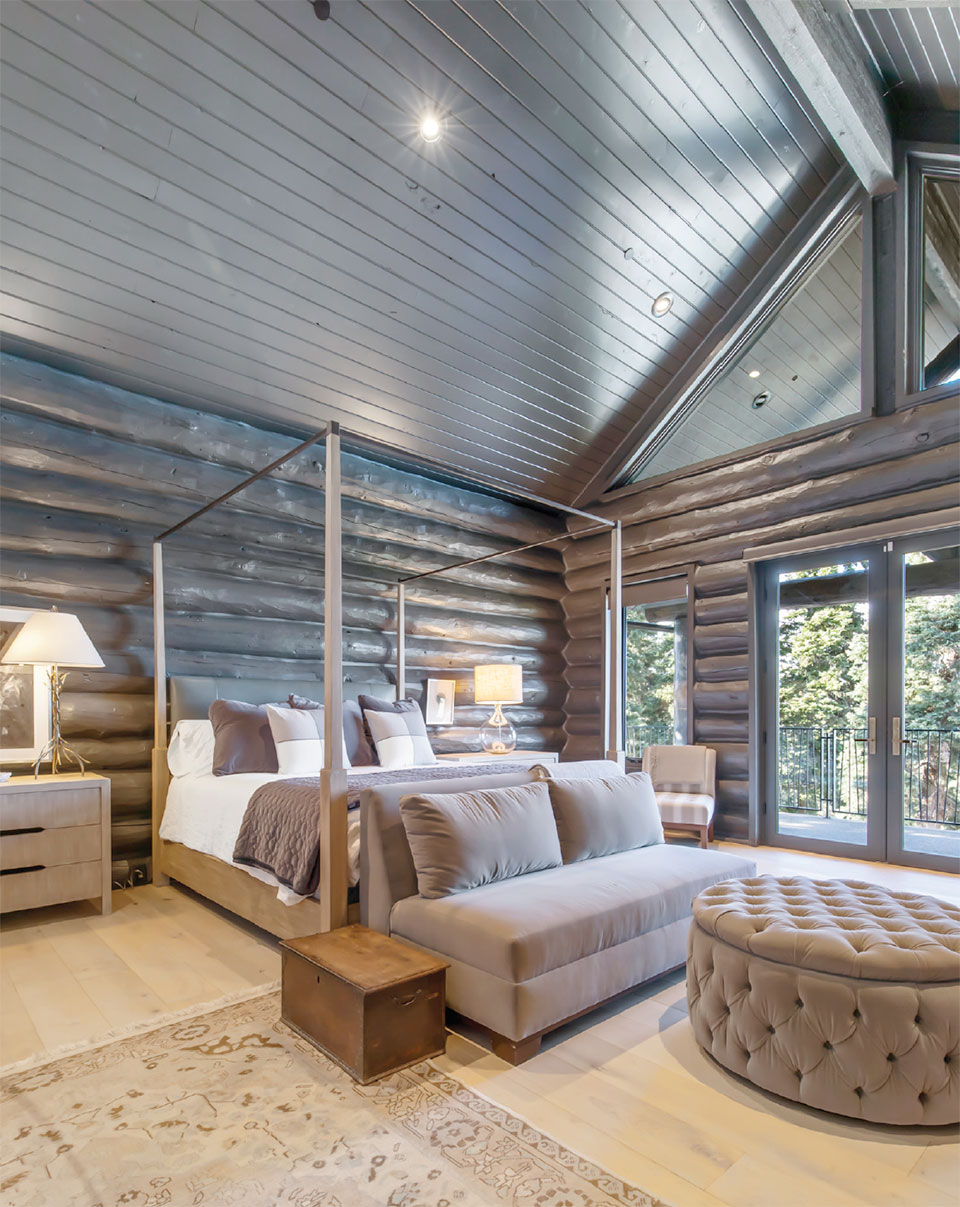 What’s evident is that Jaffa turned challenges on their heads by transforming the tangible (those logs) into an intangible and eclectic styled home that showcases the couple’s love for gathering, all while brightening and lightening the spaces. “I worked with the clients to give them the aesthetic they were after. They didn’t want acres of drywall and carpet; they wanted finishes that were durable and special,” Jaffa says. Those finishes ranged from black reclaimed limestone in the kitchen to stainless steel in the laundry room. But first, the existing finishes. “Everything that we took out of the house was repurposed; all the cabinets, plumbing, doors, appliances, and floors—everything was taken to Habitat for Humanity to be repurposed in someone else’s house,” Jaffa confirms. “What we could reuse, we did reuse. On the upper and lower levels, we kept the existing doors and just painted them to match. We spent money where we could create a wow and a pop.”

One of those pops is in the kitchen in the form of a custom refrigerator. “The fridge was a big task to take on, and I’d never done one like it, nor had anyone in Utah. The example I was given was from a participant in a well-known reality TV series. Her fridge has its own blog. I remember mentioning to my client that I would design theirs and make it even better,” says Jaffa. And that’s precisely what happened. Jaffa determined the equipment’s size, location, and size and built it with exquisite marble slabs and perfectly placed LED lighting. The magnum opus is the epitome of the chilled exhibition.

Jaffa didn’t end there. He masterminded a butler’s pantry and a wine cabinet in the bar area. He explains, “It’s nice to have a pantry that can be closed off when it’s a mess.” The pantry, with its open shelving and ample room for prepping, houses a 36” fridge and 36” freezer (both Sub-Zero), a Gaggenau Combi-Steam Oven, and Sous-Vide Vacuuming Drawer. “We considered every detail,” Jaffa says (including the custom machine-milled brass and teak wine cabinet from Italy). “It’s signed by the artisan. It’s magnificent.” How did Jaffa create that kind of flow for people in the house for whom there are no dead-ends? These combined areas of space prove that Jaffa’s experience and intuition fully align and reveal his deftness for dimensions.

Upstairs off the living room and dining room (with its divine limestone and built-in banquette) lie the master and guest bedrooms. “The steel railing throughout the home and on the decks was designed like aspen trees in a forest, canted on angles in certain ways,” Jaffa states, for an outcome that is simple, not busy or fussy. One can see through the kitchen and living room from the upstairs landing and farther over the pool pavilion’s green roof. Everything is restful to the eye and conveys a mood that complements the interior and exterior spaces. 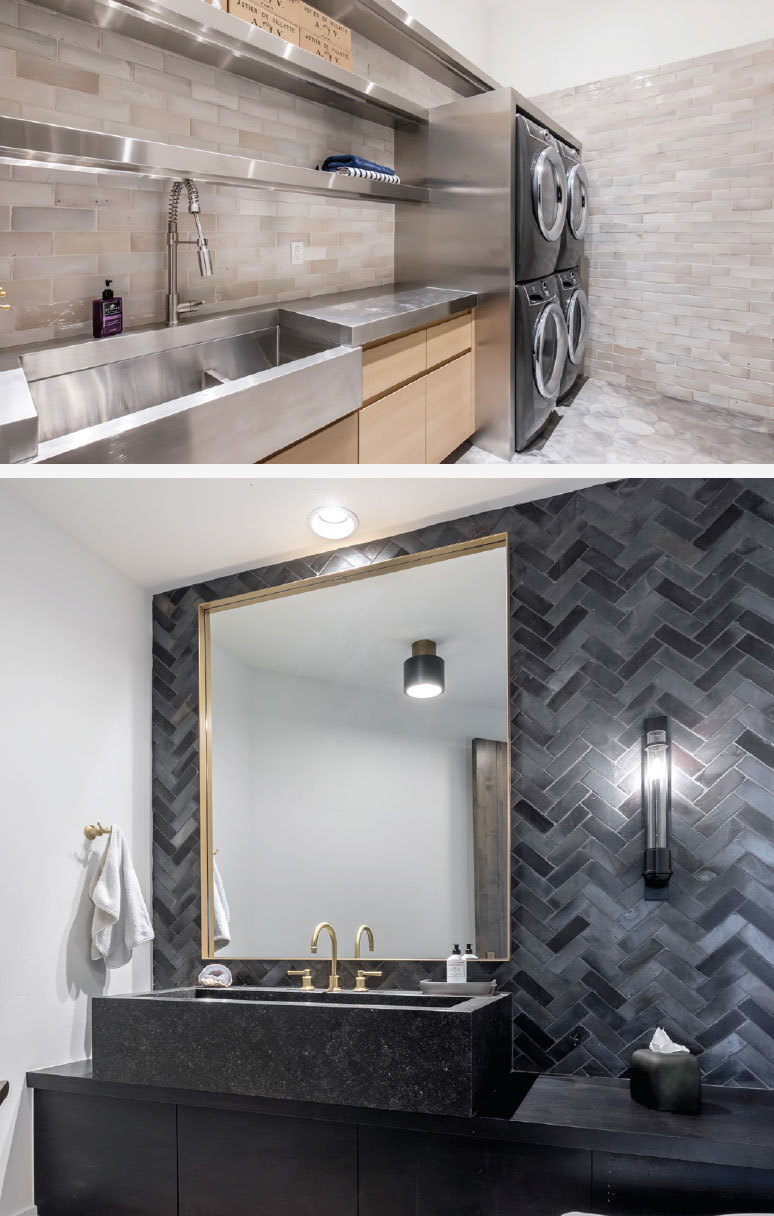 “The client said she’d never visited the old pool house, and if we were going to do something, she wanted it to be a place she would enjoy. So naturally, now she never leaves the pool.”
–Scott Jaffa, A.I.A., CGP, CEO/Architect, Jaffa Group

In the master, painted in dark graphite with matching window coverings, the fireplace’s new look defines the jewel-like space. “The fireplace was faux. I wanted a European feel, so I decided to over-grout the existing stone so it wasn’t a dry stack. We stained the mantel the same as the walls. Now it feels sexy,” Jaffa shares.

The guest bedrooms now focus on ease, comfort, and utility. As he explains, “The three beds in the kids were originally yellow, and we painted them black, and with new bedding, they look great.” A built-in daybed was added in another room, while another received custom-printed wallpaper from Trove. Jaffa again reconfigured the space to accommodate more guests. “We built the bunk beds because we took space from another bedroom, and I added two bathrooms, and that took room out of the mechanical room, so I added a walk-in closet, and now that room sleeps six,” he says. 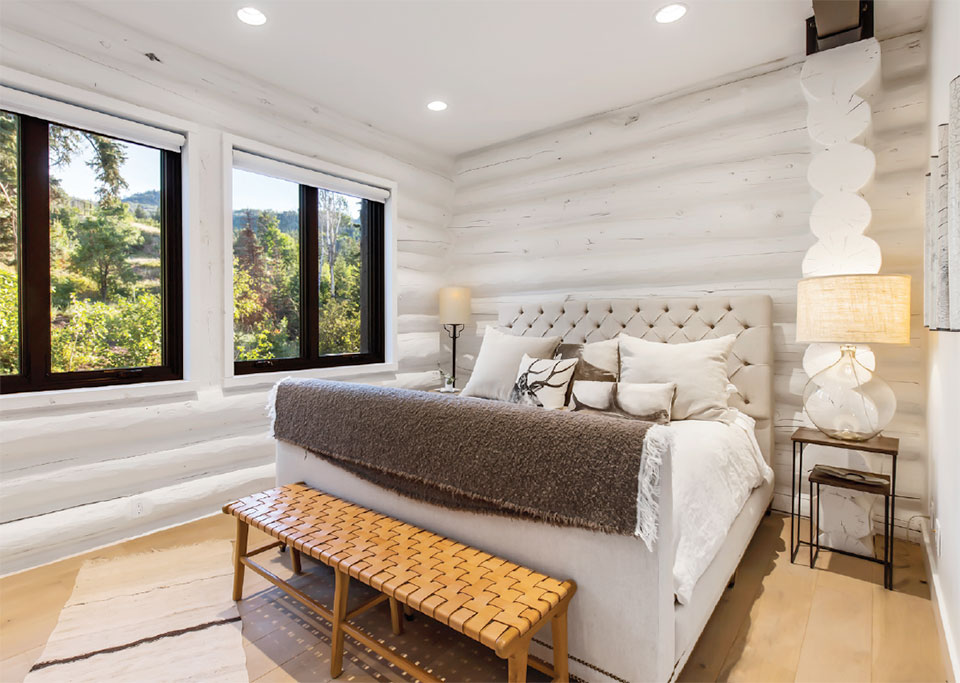 Jaffa then set his sights on the laundry room, understanding his clients’ preference to entertain at full capacity. Again, he asked himself, “How do I make this a place you’d actually want to go?” Because the client requested no cabinets, “I integrated a stainless-steel counter and shelves that wrap around the stacked washer and dryer. Then I used Moroccan tiles and added a thin layer of tinted concrete over the existing floor. We went through quite a few iterations with coloring to make it look like rock concrete,” Jaffa remembers. The appeal is real. “They didn’t replace the washer and dryer. You actually have to stick a pin in the on/off button to turn it on because the button is missing. We reused everything we could,” he reiterates.

This former log cabin’s rebirth is a significant achievement, yet its gift of transformation continues with a re-conceptualized pool house, now an authentic pavilion. “The client said she’d never visited the old pool house, and if we were going to do something, she wanted it to be a place she would enjoy. So naturally, now she never leaves the pool,” he laughs. But there were concerns from the beginning on its siting. “I didn’t want to block the house’s view with a pool house because the previous pool house had a roof that blocked the view,” Jaffa says.

Jaffa wanted to tie in the existing house and walls to the new pool, so he created an arc-shaped area from the back of the house, but first, he needed a new stone for the facade. “The house was clad in river rock, and we don’t even have rivers here, so I don’t know where it came from. We re-clad it in new stone and connected the retaining walls to work with the existing pool location,” he explains. The result is a stunning open-air pool pavilion with a kitchen, fireplace, pizza oven, TV, fire pit, and a hot tub for 12 people. Its elegance is at once stately and symmetric, save for the round opening for the fire pit. “I don’t usually work with anything round, but it seemed right, and everything was so linear and angular that I thought, “Let’s just soften it up and have it take on the reflection of a log home where everything is round,’” Jaffa recalls. Intuition? Definitely.

When asked how Jaffa would describe the home now, he answers thoughtfully, saying, “A transitional log cabin. I wouldn’t use the word modern, although there are modern elements. It’s more eclectic; there’s a little bit of everything. It’s an eclectic log cabin.”

This remarkable home is filled with soul for its creativity, integrity, and positive energy. It’s a genuinely private yet communal retreat for simple pleasures like cooking and swimming with access to Park City’s four-season recreation. One that is ready to be celebrated for its transformation and sure to be filled with celebrations by people who share a pure love for the mountains.