There was a time when wood was the most ubiquitous building resource in the United States; it was strong, affordable, and plentiful. There was a time when forests were packed with trees hundreds of years old, with varieties of oak, redwood, maple, chestnut, walnut, hickory, pine, fir—the possibilities were endless as were the resources. Or so it seemed at the time. As demand for lumber increased across the country in the 19th and early 20th centuries, our forests paid a heavy toll.

Today, with only four percent of our country’s old-growth forests remaining, old-growth lumber is a highly valued resource because of its beauty, quality, and strength. To procure that kind of lumber today, we have to go back to the source—well, the source we have left anyway: old barns, mills, fences, and other structures built when old-growth was plentiful.

A smattering of companies began to specialize in reclaimed lumber as early as the 1970s. However, it wasn’t until 1990 that the popularity of reclaimed lumber shot up. This upsurge was due to three fundamental factors: the lack of natural supply of old-growth lumber, the economic advantages in deconstructing older structures for the reuse of lumber, and the fact that reclaimed wood added certain aesthetic qualities that people began to seek. With the culmination of these factors, the reclaimed lumber trend was born. And lately, that trend has been energized because of the rising commitment to sustainable building practices. 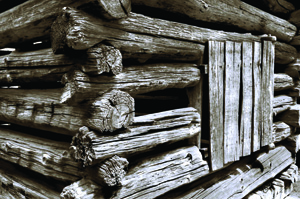 According to many reclaimed lumber experts, ski resort communities were at the heart of this boom in reclaimed lumber. “That is where the product was going—to Tahoe, Park City, Sun Valley, Aspen, and Vail—mountain places,” says Al Harrison of Intermountain Wood Products (IWP), one of the leading suppliers of wood products in the West with stores from Nebraska to Oregon. “That’s where the drive is. It not only fits the setting from a design point of view,” he says, “but also the socioeconomic sector.”

To acquire product for Antiquus, Intermountain Wood Products’ reclaimed lumber line, IWP works with “barn farmers,” who reclaim barns and other structures then transfer the materials to Intermountain where the process of refurbishing, remilling, defecting, and sorting takes place. “You have to understand,” says Harrison, “that we are purchasing wood that is over 100 years old. For as much wood that comes into the factory, about half of it needs to be trashed.” But the half that is good is very good, and IWP works to ensure all the wood they sell meets their high standards.

Who inspects the lumber to give it a passing grade? Harrison and his team do.. “I sort and identify the species; oak, chestnut, walnut, cherry, hickory, with oak being the most popular because it is a look people want. Then after we have processed the wood, we can go on to create several different looks. We can tongue and groove the wood and not touch the face of it, or we can skip plane the face—whatever the client wants.”

Although flooring is their specialty, IWP also provides lumber for beams, doors, and siding. With regular requests for very large orders, they source from multiple suppliers. Harrison takes special care to find the same species and match the wood so the entire house is unified. Sure, it’s labor intensive, but Harrison says, “To see those large projects come together is gratifying and the results are beautiful.” 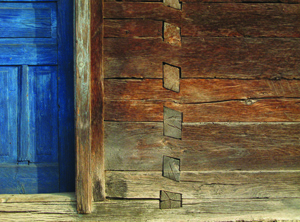 With over 30 years of experience, Tim Boss of T.K. Boss, LLC., Residential Design, has seen trends come and go. But reclaimed products—especially wood—have a classic quality that works well with a variety of architectural styles and stays in vogue. “Right now about 50 percent of my clients are using reclaimed products in their homes,” he says. “We have used heavy timbers for structural trusses, and set bath tubs on reclaimed wood platforms. We have used pickle wood for exterior soffits where you can smell dill pickles while walking on the decks. We have made fireplace mantels, kitchen islands, tables and beds from reclaimed products.”

As one of Park City’s leading residential designers, Boss has clients come to him with pages of inspiration from sites like Houzz or Pinterest—inspiration for looks they want to incorporate in their home. “My work is in trying to find a place for the ideas they bring to me.” One of his favorite projects was a family fishing lodge on the Provo River where the client wanted to use multiple sustainable products. “We were able to use many different kinds of reclaimed wood and metal. Even the rock we used was from the building site and the local area.” And Tim Boss doesn’t just put his talent to use for his clients. He and his wife are currently building their own home using reclaimed wood for the floors, vaulted ceilings, fireplace mantel, bathroom countertops, and two custom sliding doors.

Wyatt McDaniel from Peppertree Kitchen and Bath in West Jordan, Utah, says aesthetics is often the main motivator behind the use of reclaimed lumber because it increases the character of a home. “Certain people want a certain look. Period,” says McDaniel. “And reclaimed materials in general and reclaimed lumber in particular fit a variety of looks from the refined rustic to contemporary.” Specializing in custom cabinetry, McDaniels and his team at Peppertree have certainly worked with a variety of aesthetics.

Reclaimed materials in general and reclaimed lumber in particular fit a variety of looks from the refined rustic to contemporary. – Wyatt McDaniel, Peppertree Kitchen and Bath

McDaniel has many clients who want the character that the reclaimed lumber brings to their project, and he has years of experience working with the product. He says that there are many ways to work with the lumber. For instance, the last cabinets Peppertree installed were machined only on the back while leaving the faces rough creating a very rustic presentation. “It turned out just beautifully,” he says.

Like everyone who works with reclaimed wood, McDaniels and his team at Peppertree also have to be conscious of supply when working on large projects. “A Deer Valley home we just completed,” says McDaniel, “featured these great cabinets made from reclaimed wood and then elsewhere in the house. The same wood was also used in encompassing a shower. So we had to make sure there was enough wood that looked the same to cover everything they planned on doing.”

Finding enough wood to cover a large project can often be a concern when dealing with reclaimed wood. Builder Todd Arenson of Todd Arenson Construction says there are many factors to consider when incorporating reclaimed lumber to a project. There’s an art to applying the lumber. “Often, the installers have to straight-edge the boards or do other processes to make them consistent and fit together well. And then when a weathered board is cut, the edge no longer has the weathered grey look. Care has to be taken to hide all the raw edges.”

Arenson completed his first reclaimed project three years ago. His company completely covered a house with Wyoming fence wood. Since then, he has done an additional siding job with a product called Nature Aged Wood and several oak floors which he says have been the easiest of the reclaimed projects to date. “The product is remilled to specifications and therefore a pretty standard installation.” The bonus there? When an installation is less complicated, it takes less time, which saves the client money.

Many of Arenson’s clients specifically want reclaimed oak flooring because of the richness of color and the distress of the old nail or bolt holes, and they will pay the premium to get that look. “People lean towards the reclaimed products because of the appearance of the wood. Using reclaimed is typically more costly, but the client usually falls in love with the look and will pay a premium to get it.” Arenson too, falls for the look. He confesses, “Seeing the final product installed is always my favorite part.”

The increasing interest in building sustainably has generated more demand for reclaimed lumber for many reasons. Using reclaimed lumber gives this high-quality wood new life. Consider what would happen to that old barn if no one reused the wood? It would probably end up in the nearest landfill. Some point to the cost of reclaimed lumber as a deterrent to using it. But as those who work with it and those who live with it attest, it’s definitely worth the price.