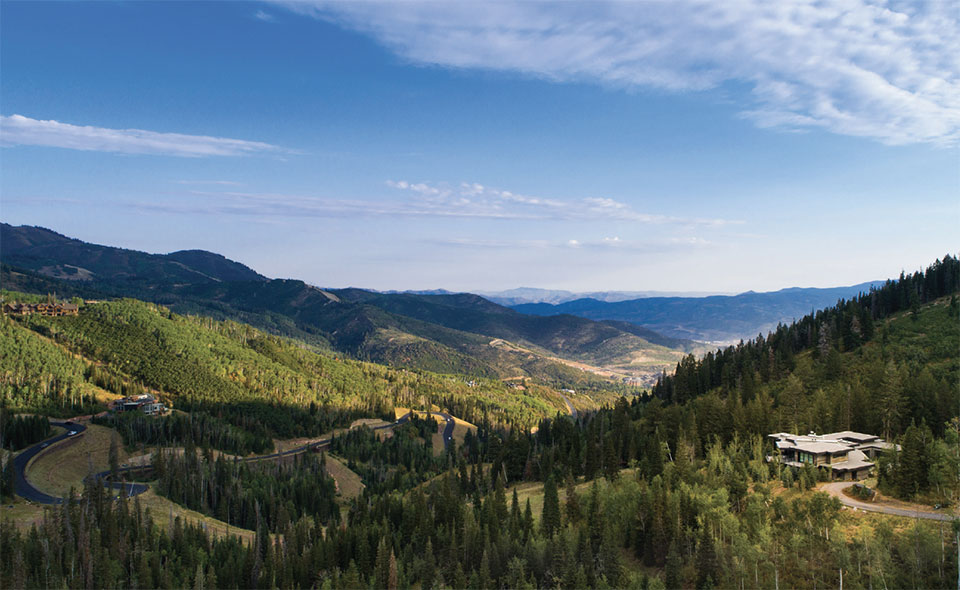 Arriving Home in The Colony Feels Like a True Departure 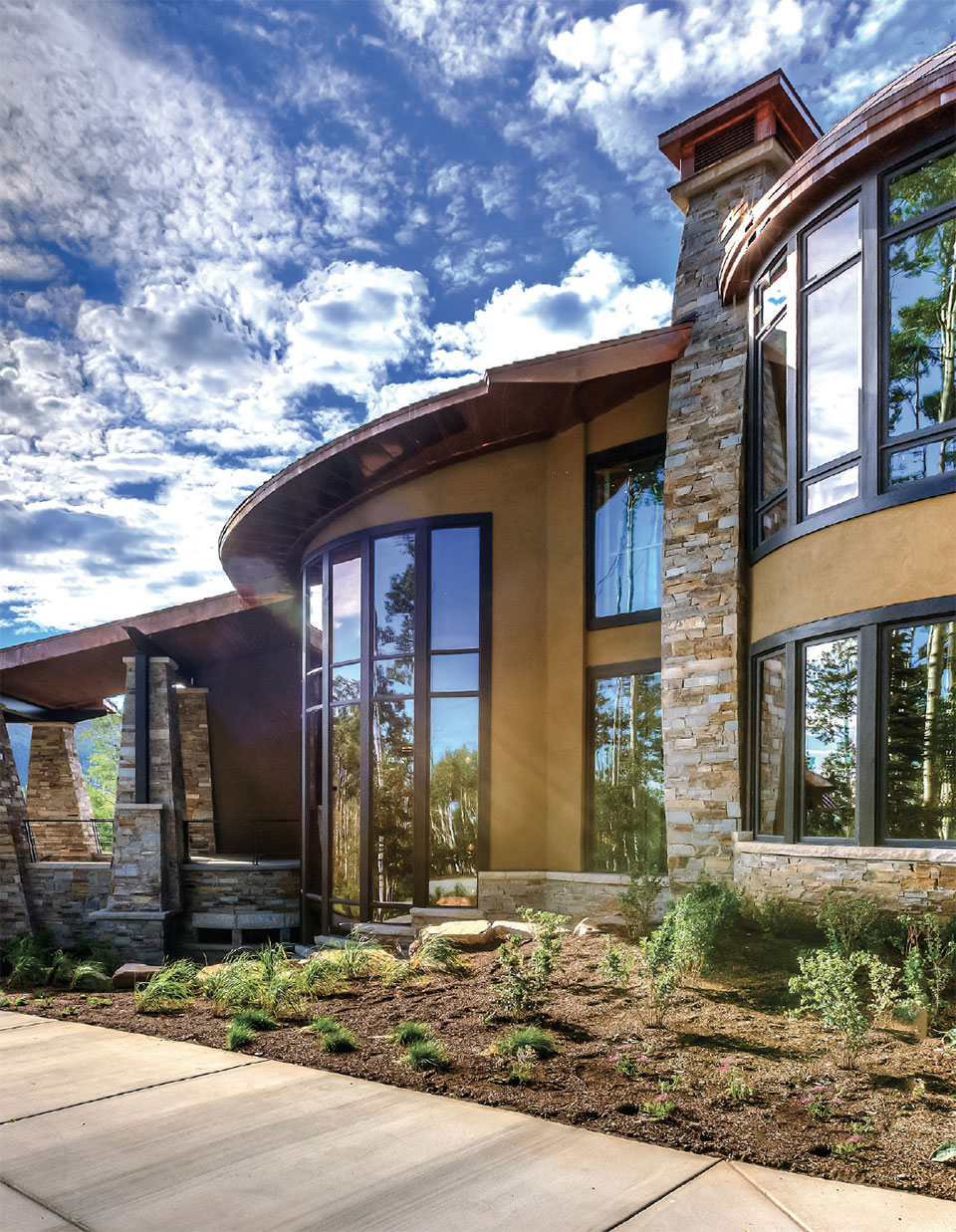 A picture of The Colony at White Pine Canyon is worth a thousand words. A visit will leave you speechless. The concept of this unique alpine escape is special. The private, ski-in/ski-out, gated preserve is nestled in the heart of one of North America’s largest ski and snowboard resorts, in the town of Park City, Utah, site of dozens of 2002 Winter Olympics events.

From the instant your feet touch this magnificent land and you fill your lungs with this pristine alpine air, you’ll understand that the only way to get away from it all is to live in the middle of it all. Arriving at The Colony feels like a true departure.

A Cool, Cool Summer at The Colony

There are many reasons to head for the mountains in the summer. Cool mountain air, breathtaking vistas, massive aspen groves, bubbling streams, abundant wildlife, and rich mountain flora are just a few of nature’s contributions to this special place.

The Colony is secluded while being very accessible; it’s just 35 miles from Salt Lake International Airport, and 22 miles from Heber Valley Airport, perfect for private jet travel. Once you are settled into your Colony retreat, you’re a mere five miles to Park City’s Historic Main Street, home to the Sundance Film Festival, and world-class dining and shopping. 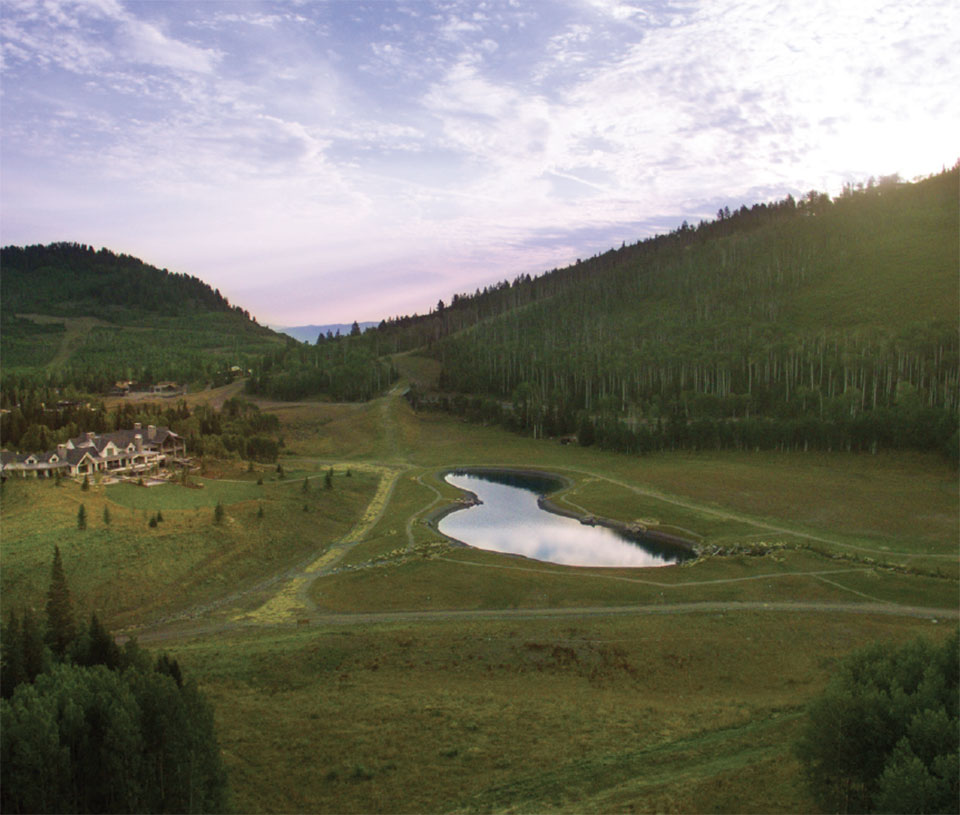 The concept of this unique alpine escape is special. The private, ski-in/ski-out, gated preserve is nestled in the heart of one of North America’s largest ski and snowboard resorts, in the town of Park City, Utah, site of dozens of 2002 Winter Olympics events.

Air: Pack your picnic basket and enjoy the dozens of open-air concerts held around The Colony throughout the warm-weather months. Enjoy a sunrise hot air balloon ride that will give you an incredibly unique way to take in miles of the Park City landscape. An added bonus is the annual Autumn Aloft hot air balloon festival, held each September in Park City.

Land: Take just a few steps outside your home to set off on a hike, bike, or horseback ride, either on the numerous private trails sprinkled among the 274 homesites scattered over the 4,600 acres of the development–or along the hundreds of miles of trails open to the public.

In the summer months, enjoy the selections at Park City’s weekly Wednesday Farmer’s Market and the Park Silly Sunday Market. The July celebration of America’s birthday in Park City stretches into days, not hours. Labor Day is celebrated as Miner’s Day, where thousands congregate in the streets of Park City for a parade and festivities commemorating the area’s rich mining history.

Water: Streams, waterfalls, lakes, and ponds can be found throughout The Colony. Boating, paddle-boarding, kayaking, white water rafting, and fly fishing opportunities abound at the numerous lakes and on the Weber and Provo Rivers. 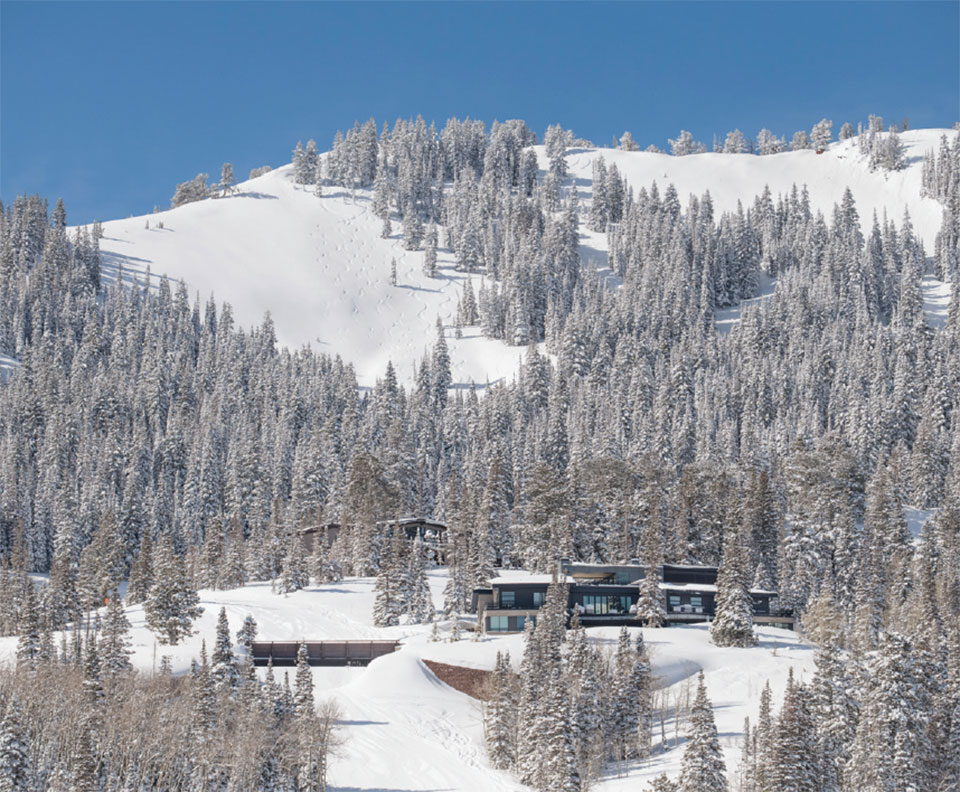 The stunning summers help you prepare for the epic winters. The Park City Mountain Resort ski day begins and ends at the back door for Colony homeowners. With an average snowfall of 25 feet per year, and 350+ inches last winter, you can bet skiers and boarders are not wasting any time enjoying the more than 7,300 acres of winter magic in-bounds. Among those acres, there are 348 trails, 41 lifts, 13 bowls, 8 terrain parks, and 2 base villages to enjoy.

Our state, known for the best snow on earth, has already hosted one set of Winter Games. The facilities, venues, and transportation systems built for the 2002 Olympics have been so meticulously maintained and upgraded, Utah has been selected by the United States Olympic Committee for a potential 2030 Winter Games bid. The move would inject even more momentum into Utah’s real estate market, which is the number-one state in house price appreciation since 1991 (up 321.57% since Q1, 1991, according to the Federal Housing Finance Agency). Not only that, but The Colony homes are directly in the middle of Park City’s venues – and all of the Olympic action.

The Next Great Escape: Dream Lots on Dream Ridge

It’s an accepted fact that this land is special. And the newest releases in The Colony–the Dream Lots–are in a category of their very own. They are the most spectacular homesites ever offered in The Colony, and there are only two of them.

Live the alpine dream year-round from your dream home in a Dream Lot, perched atop Dream Ridge, which feels like your own personal mountain. The Dream Lots offer 360º perspectives: of Park City Mountain, territorial down-valley views, and the majestic Uinta Range ridgeline. These unparalleled homesites are partially wooded with lush aspen groves and evergreens, offering, relatively flat building envelopes and unmatched privacy. 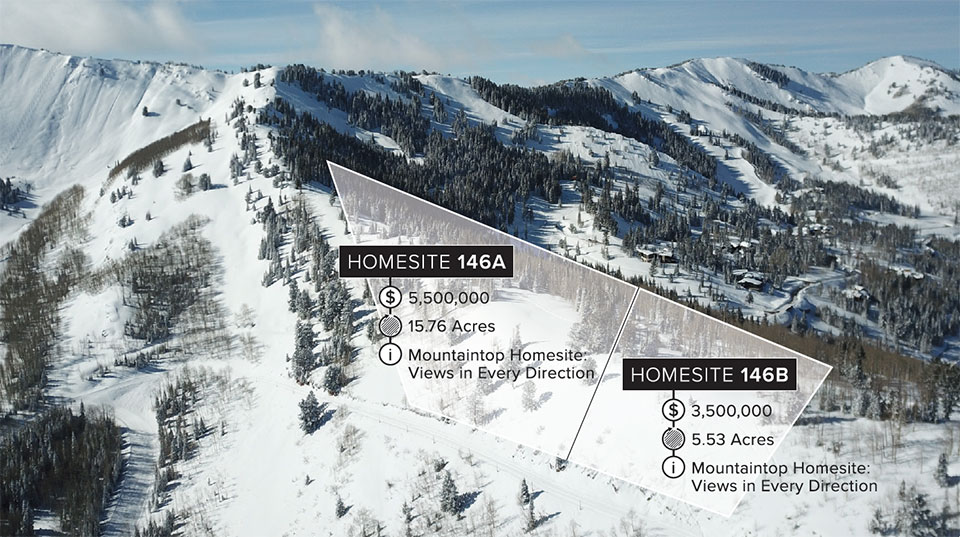 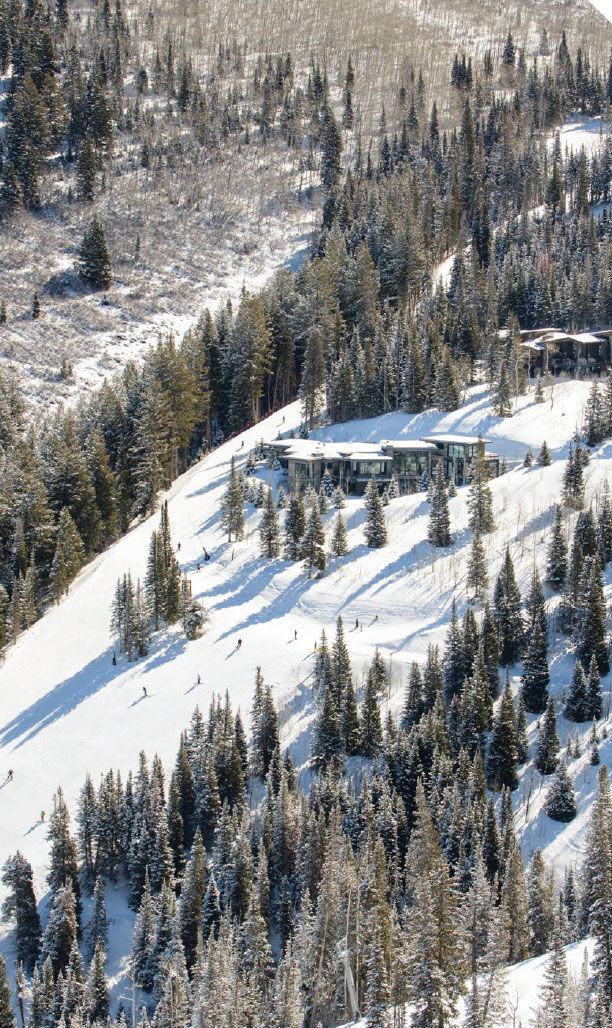 A Journey for the Ages

The current Colony Master Plan started to evolve in 1992. But the real story began when John George Condas arrived at Ellis Island in 1903 and headed west. He settled in Utah and was one of the region’s providers of food for the large mining population. Park City’s cool summers offered an ideal habitat for Condas’s large sheep herds and they wandered the hills from June to November. It has been critical to the project that the Condas family legacy lives on today. The developer and each new Colony owner are committed to being good stewards of the land, through the master planning, where the landscape remains the inspiration, and through the philosophy that “less is more.” Historical landmarks of the Condas family settlement can be found throughout the development and a number of sites have remains of small sheepherders’ shelters. There are also quite a few massive aspen trees carved with the previous inhabitants’ initials–dating back to the early 1900s–documenting their presence.

The devotion to this land is such that nearly 90% of the development’s 4,600 acres will remain pristine and untouched open space, protected with preservation easements. Current offerings average more than seven acres per lot, the largest to be found within just about any private, gated, ski-in/ski-out community in the world.

Live the alpine dream year-round from your dream home in a Dream Lot, perched atop Dream Ridge, which feels like your own personal mountain. The Dream Lots offer 360º perspectives: of Park City Mountain, territorial down-valley views, and the majestic Uinta Range ridgeline. 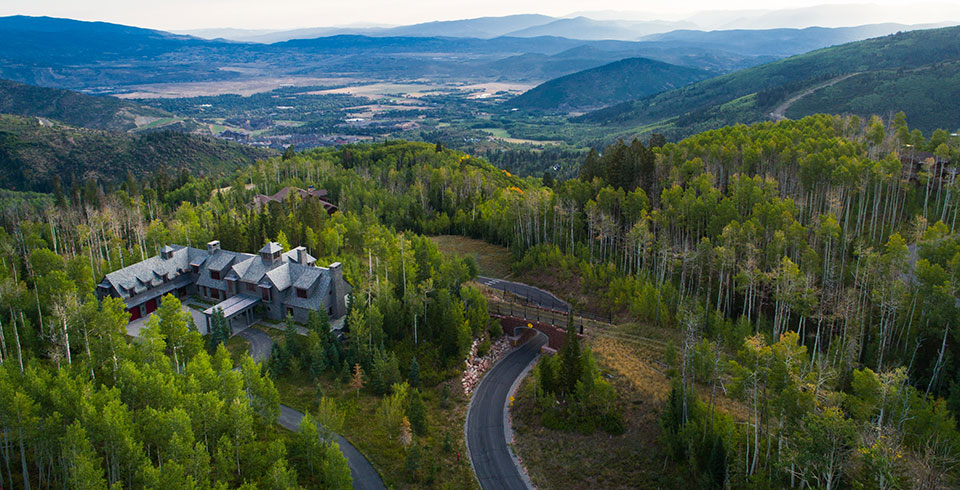 The Colony Sales Team knows The Colony real estate market better than anyone else. Bronson Calder and his team are on-site 365 days a year and are equipped with more than 80 years of Park City knowledge. The Team has had a presence in The Colony from the project’s inception, along with continuous direct access to the project’s development staff. This provides unprecedented ways for you to understand and appreciate the complexities of this community, and how you can maximize the development to best fit your lifestyle–and your legacy.

There’s no question that The Colony at White Pine Canyon feels like its own world; its access, privacy, and open spaces are incomparable. And the duality of that access also contributes to the singularity of The Colony experience. However far you travel to reach The Colony, its proximity to all that Park City has to offer provides homeowners the luxury of quickly connecting with the community and participating in whichever elements of city life they choose, with the knowledge that their private mountain retreat is just moments away.