With a reputation for quality custom work, Lloyd Construction has served the Wood River Valley for over three decades. Their combined experience and versatility offer clients peace of mind.

For 37 years, the Lloyd Family has been a mainstay in the local building community. Founded in 1977 by John and Carolyn Lloyd, the company’s solid foundation and commitment to the client have helped John and Carolyn’s son, David, continue to grow the business, network, and foster new client relationships. In 2011, Lloyd Construction acquired its Public Works license, opening the company up to additional opportunities. 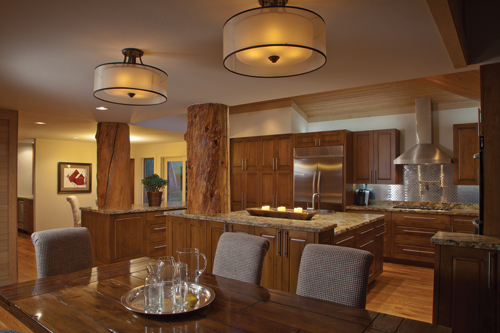 As the company’s owner and president, David is committed to continuing education and staying current on industry trends and certifications. He is a registered master builder, a member of the US Green Building Council, and has served as regional president for the National Association of Home Builders. In 2012, Professional Remodeler named David one of the top 40 remodelers under the age of 40; to date, he is Idaho’s only recipient of the honor. David has also held a seat on the City of Hailey’s Planning and Zoning Commission and has volunteered with Habitat for Humanity.

Lloyd Construction’s employees are meticulously selected for their craftsmanship, professionalism, and attention to detail. Project manager Ian Sundby, who joined the company in 2007, has over 15 years of experience in the building industry. Able to perform any task from concrete through finish work, Ian has managed dozens of projects, from small remodels and maintenance work to custom homes and commercial builds.

Lloyd Construction’s name is associated with two recent high-profile projects in Ketchum, the spring face-lift and current addition to Sturtevant’s on Main Street and the 2012 spa addition at Zenergy Thunder Springs.

Few Zenergy members were aware that an entire construction project was under way right under their noses. In fewer than six months, Lloyd Construction transformed a 5,000-square-foot underground space into a gorgeous, tranquil new spa and salon. It was a complicated project as much of the work was performed around class schedules and late into the evenings, allowing the health club to remain fully operational throughout the construction. 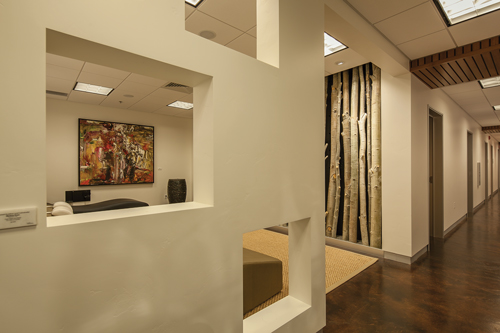 Robert Parker, Vice President of Asset Management for VP Companies, Zenergy’s development firm, praised Lloyd Construction’s diligence and dedication to finish the work within the set time frame and under budget. “Attention to detail, as well as proper scheduling, was outstanding, resulting in a happy staff and client both during the construction and after completion,” he added.

While the company’s commercial and public works scope has flourished, new construction and remodeling remain Lloyd’s strongpoint. With a service-oriented approach, no project is too big, small, or unusual. And unique homeowner requests are not uncommon here in the valley. When Pam Bailey came to Lloyd Construction, she had a very specific vision.

“We wanted to mimic the characteristics of a specific pine log—pull out the distinctive colors and textures—and incorporate them into our home,” explains Bailey. “Rather than looking at us like we were crazy, the Lloyd team rolled up their sleeves and made it happen. And it turned out even better than we imagined.” Adding to the challenge is the fact that the Bailey’s primary residence is 1,800 miles away, in Houston, Texas. “We had complete confidence in Lloyd Construction,” Pam added. “They kept us involved and up-to-speed on their progress on a weekly, and sometimes daily, basis.”

Lloyd believes that excellent communication is critical to a successful build. “Our clients have direct access to everyone in this company, throughout the entire span of their project and beyond,” said David. “Whether you’re down the street or halfway across the country you’re going to have the same experience.”

The Lloyd team members are involved in the community and take advantage of living in this special place. When they’re not in the office or on-site, David and Ian, along with their families, can be seen around town, on the slopes, climbing, or bike commuting.