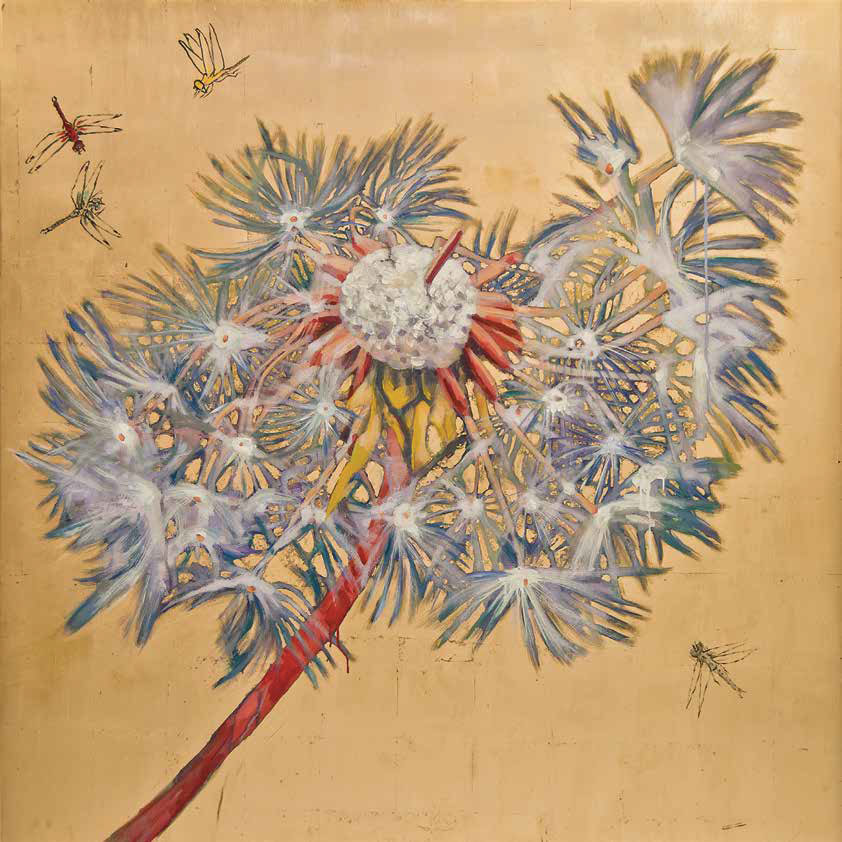 Hung Liu was born in China in 1948, a year and a half before the Communist forces defeated the Nationalists and instituted Communist rule. Liu’s early years were spent in an atmosphere in which traditional Chinese culture was ever-threatened by the new regime. Most of her painting center on images of that older China set against images from the newer one that she grew up in.

Liu has lived in the United States since 1984, but her Chinese heritage and its complicated transitions, are pivotal aspects of her work. Although traditional Chinese culture plays a significant role in her work, so does the modern artform of photography. With great effort and attention to detail, images are rendered from archival photographs and the effect seems to float in the midst of brightly colored abstract fields. There is an overall sense of the evocative—the past evoked in the midst of something distinctly modern and vice versa. Symbols and color play a significant role in the overall impact of Liu’s work.

Gail Severn welcomes Robb Putnam, sculptor and painter, for his first solo show in Idaho. His work, in either medium, have a dual impact—they are at once playful and haunting. His sculptures are animal forms made from cast-off blankets, shirts, fake fur, rags, thread, plastic garbage bags, leather scraps, and glue. At first glance, these animals may seem the “whimsical characters found in children’s books, but his characters are something different: they are physically and psychologically vulnerable… Like mutant craft projects gone awry, their surfaces suggest the skins of these beings have been torn away, exposing their soft insides,” according to the Gail Severn Gallery. Exploring an emotional realm, one that Gail Severn Gallery describes as “an intersection of empathy, fear, intimacy, humor, the desire to touch or connect and the impulse to back away,” Putnam’s work evokes and tugs at many sides of us—the intellectual and the emotional.

The Loss for Words series is the logical outgrowth of Lisa Kokin’s previous series, Facsimile, in which zipper fragments served as stand-ins for text. Kokin says, “I have expanded my ‘writing’ to now include a variety of objects and materials on substrates as varied as linen, canvas and, most recently, industrial felt.”

In this series Kokin invents “words” and “languages” with materials that she naturally gravitates to: small domestic metal items, sewing notions, rusty metal fragments found on the street, safety pins, broken needles from the Facsimile project, and thread which she uses in unruly bunches to accentuate its gestural quality. About this series, Kokin says, “In making this work I realize how much I like using objects in ways they weren’t intended to be used, purely for the love of shape, form, juxtaposition and resonance.”

Jane Rosen explores animal nature and what it reveals about human nature in her paintings and sculptures. She says, “The

relationship of their nature to the forces of nature all comes down to a kind of sacred map. The kind of laws that govern nature begin to become visible in the interactions between these species… These are the elemental laws. I keep coming to them each time I draw these forms.”

Rosen’s show at Gail Severn Gallery is a muted collection of paintings and sculptures—work that evokes the simple and the majestic within nature. Her paintings “are more like sculptural plaques colored by coffee and dust, shaped and textured by layers of gypsum stone.” And her sculptures are “more evocative, less precise renditions of similar subject matter.”