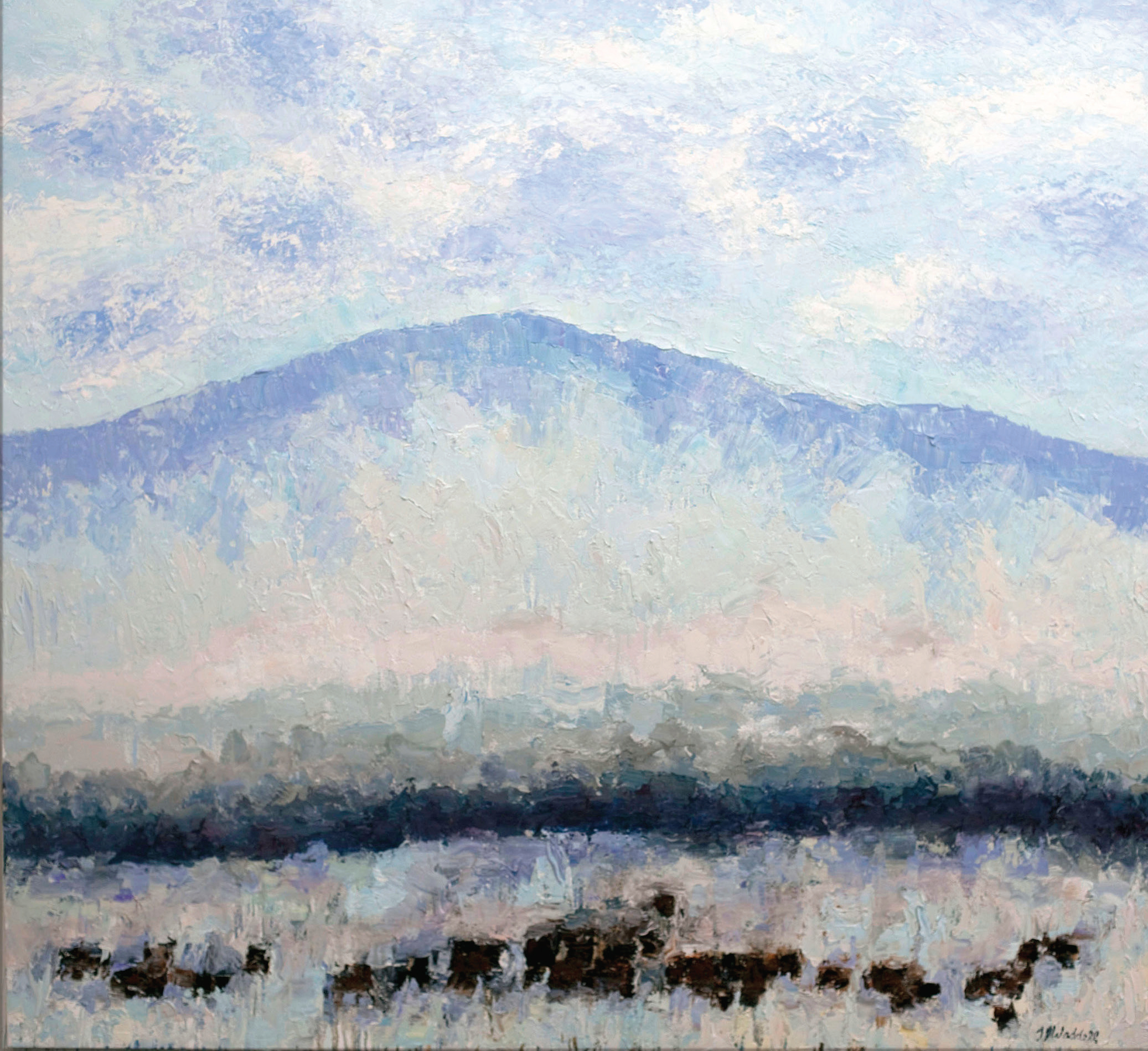 The Gail Severn Gallery presents works by artists Theodore Waddell and Gary Komarin through February 2016. Waddell, a Sun Valley resident, draws from his surroundings to present works of particular subtle meaning, often illustrating the vastness of space and distance with a mindful nod to reality and imagination, which is often apparent when looking out onto lands of the West, especially in Idaho. Waddell finds comfort in an object or the familiar in such dramatic landscapes, which is so very modern. The space between his subjects and his visions tend to have a haunting but recognizable feel.

As Jennifer Complo, McNutt Curator of Contemporary Art at the Eiteljorg Museum, says: “Waddell’s paintings are a combination of rough marks; thick paint; transparent elegant strokes; and, on a few occasions a slow, hard line scratched into the canvas. You can feel the movement of the paint throughout the paintings but the subjects are frozen. They are not frozen as a stagnant object but captured as a solitary image. Captured, interpreted, and enveloped in the landscape. They are carved out of, or laid onto, the green and grey-yellow of the spring and summer, or the white canopy of winter. And sometimes there are ghosts in the paintings, the faint image of what has changed in the piece or decays in the pasture. These ghosts refer to Waddell’s interest in life and death and our own mortality. They are metaphors for the struggle and change that is constant in life. In his artist’s statement he says, ‘The understanding of death brings about a feeling of wonderfulness and appreciation of life and just how fragile and magical it all is.’”

In addition to Theodore Waddell’s exhibition, Gail Severn Galley will feature an exhibition, The First Green Rushing, by Gary Komarin. A master of Post-Painterly Abstraction, Komarin has been at the forefront of contemporary art with a bold and colorful style recognized by art collectors worldwide and applauded by museum curators and art critics alike. While looking at Komarin’s paintings and his works on paper, the viewer is invited to the intimate space where a dialogue is established between painter and painting.

Komarin received the Joan Mitchell Prize in Painting, the New York Foundation for the Arts Grant in Painting, the Edward Albee Foundation Fellowship in Painting, the Elizabeth Foundation Prize in Painting, and the Benjamin Altman Prize given by the National Academy of Design Museum, New York. Articles and reviews of Komarin’s images and paintings have appeared in Architectural Digest, The New York Times, Arts Magazine, and CT Cottages & Gardens, among others. His mixed-media works were reviewed in July 2003 in the art world’s premier magazine, Art in America, and again in 2008. Art reviewer Carol Diehl wrote about his “energetic use of color” as seen in his gallery showings.

“My paintings proceed without preconception,” says Komarin. “I paint to find out what it is that I am going to paint. I think of myself as a stagehand who sets up the conditions necessary for drama to unfold. The very best paintings are most often those that fail the most. Once a painting has achieved a life of its own, when it speaks back to you as a painter, this is a good place to be. For me, the best paintings are those that paint themselves.”