The Sun Valley Ski Education Foundation (SVSEF) is moving on up! Thanks to the generosity and vision of some die-hard SVSEF supporters, the talents of local builders, architects, and designers, and the integral input from athletes and coaches, the new training center is an appropriate training space for the caliber of programs run by the SVSEF. Western Home Journal joined the local community in celebrating the opening of the facility and spoke to some of the people who made it possible. 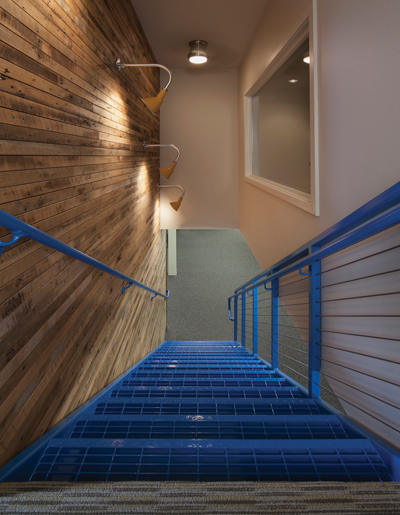 Dignitaries gathered and cut the ribbon on November 22 amid speeches, food, music, and fanfare to open the Sun Valley Ski Education Foundation’s new training center and offices in the Greyhawk Alpine Center on Picabo Street. For many, the update to the facility was long overdue, and the generosity of those who made it possible is yet another demonstration of the warm-hearted community spirit that makes people so proud to be part of the Sun Valley area community.

All the pieces for this amazing effort were in place: a solid youth winter sports program serving 5,000 athletes a year that has trained Olympic and Paralympic competitors; a retiring executive director with a vision and an incoming executive director committed to make things happen; and a community of individuals who made it a reality on a break-neck schedule.

The Sun Valley Ski Education Foundation (SVSEF) got its start in 1966 when the Sun Valley Ski Club founded SVSEF to provide racing opportunities for juniors. The Foundation may be one of the oldest youth sports organizations in the U.S. The Foundation’s first home was the “little green hut” at the base of Bald Mountain, and 23 years ago, activities moved to the Engl Training Center in the second floor of the Greyhawk Building in Warm Springs.

Training Center Outgrown and Worn Out 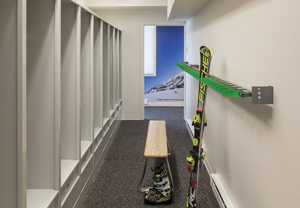 Twenty-three years and 5,000 athletes per year took a toll on the Engl Training Center. The staff and construction team describe no bathroom, and throw out terms like cramped, old, and smelly. Morley Golden politely and succinctly stated, “It needed a major overhaul.”

Sun Valley architect Michael Blash recalls that former SVSEF Executive Director Don Wiseman set redesign and remodel on the front burner and enlisted Blash to develop preliminary designs and cost estimates. “The issue was space, and once we had some additional space on the third floor of the Greyhawk Building, I moved forward with the design for the new facility,” reports Blash, who recounts that those involved at the time preferred remaining at the Warms Springs location for the convenience of the young athletes and their families rather than relocating.

Three generous individuals are credited with acquiring the needed space on the third floor when an upstairs condominium unit came up for sale. Kipp Nelson, a member of the SVSEF Board of Directors, and ardent youth program supporters Steve Shafran and Jack Bunce purchased the 1,600-square-foot condominium and agreed to lease it back to SVSEF for a token fee.

“It made immediate sense to use the third floor space for offices for the SVSEF and to organize the project by dedicating the second floor exclusively to the training facility,” explains architect Blash.

The SVSEF Board charged forward with fundraising, and from there the project sped ahead. “With the Board fully behind the project and raising money, Morley Golden agreed to lead the efforts as project manager, and Grabher Construction and Jennifer Hoey Interior Design got on board. We moved forward as a fast-track project, tweaking the design as we went and as the Board raised funds,” remembers Blash.

Asked about his design concept for the space, Blash describes, “My concept was clean and contemporary. Because of the fumes from ski-prepping and waxing, a mechanical system with good ventilation was a priority. My inspiration for materials came from skis—smooth sleek surfaces and metal. Jennifer Hoey took the lead for color selections.” 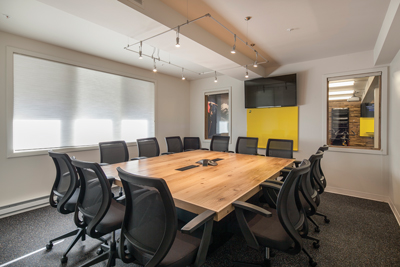 Golden worked as the liaison between the design and construction team and the SVSEF Board of Directors. “We had the full support of the Board. I kept them abreast with reports, and they responded with crisp and timely decisions.”Morley Golden accepted the challenging role of construction manager/project manager on a gratis basis as the completed schematics were transitioning to working drawings. When asked why he would volunteer for such a demanding unpaid job, Golden explains, “I am passionate about this community, and generosity is key to moving it forward.” The SVSEF is one of many non-profits Golden has worked with as part of his lifetime commitment to volunteer service during his 26 years in the Sun Valley area.

“The timing was right in many ways, as the SVSEF had just received a designation for an Olympic training site,” recalls Golden. The generosity of the design and construction team of Michael Blash, Jennifer Hoey, and Graebher Construction has been publicly recognized, but Morley Golden also acknowledges the subcontractors’ support. “We followed guidelines to have the work competitively bid, but a large number of them contributed extra time.”

Elmar and Fritz Grabher were the faces on the job for Grabher Construction. “I can’t remember a day when I didn’t see Fritz on the jobsite,” remarks Morely Golden. Elisabeth Grabher comments, “This is a great project that really shows what can happen when a community comes together. It also shows how special and generous this community can be.”

All three designers from Jennifer Hoey Interior Design got involved with the new facility’s design. “We selected the wall treatments, flooring, lockers, and the office furnishing packages. The custom conference table is our design. We worked with Executive Director Rob Clayton and some of the athletes for their input, as well. Some of this inspiration can be seen in the vision wall, the photomural, and yellow idea paint, a wall treatment that acts like a white board that the instructors can use as a visual aid,” Hoey reports. “Rob also suggested more of a clubhouse feel, so we added some antique oak that warms the space up visually. The young people we spoke to stressed their affection for the traditional Sun Valley colors of blue and gold, so we incorporated them along with Rob’s preference for the Olympic colors.”

The owners and fellow tenants of the Greyhawk Building caught the spirit and repainted, rehabbed the elevator, spruced up, and supported the celebrations. 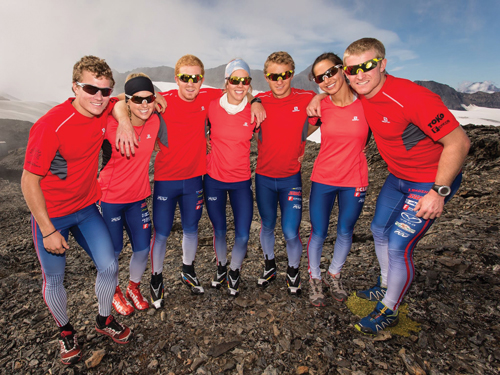 Current SVSEF Executive Director Rob Clayton came on board at an exciting time. “I started May 20th of this year, and the office and training center plans were drawn and submitted for permits. On June 6, demolition began, and the work completed a day before the November first deadline.

“It is a better space for recuperation, recovery, and post-workout training, and it is much more hygienic,” Clayton observes. “The open design will foster more of a team atmosphere among our four disciplines. The technological infrastructure is superb. There is the capacity for instructional feedback through video using the data storage, networking, cables, and plug-ins.”

“This will be our first year,” Clayton continues, when asked to predict the season. “We will see how they do. It’s a great gift from the community, Board of Directors, and friends. Personally, I think it will raise the bar, and the athletes will put forth the same effort to mirror the work of the community.”

Morley Golden says of the completed facility, “We hit the mark and had fun doing it.”