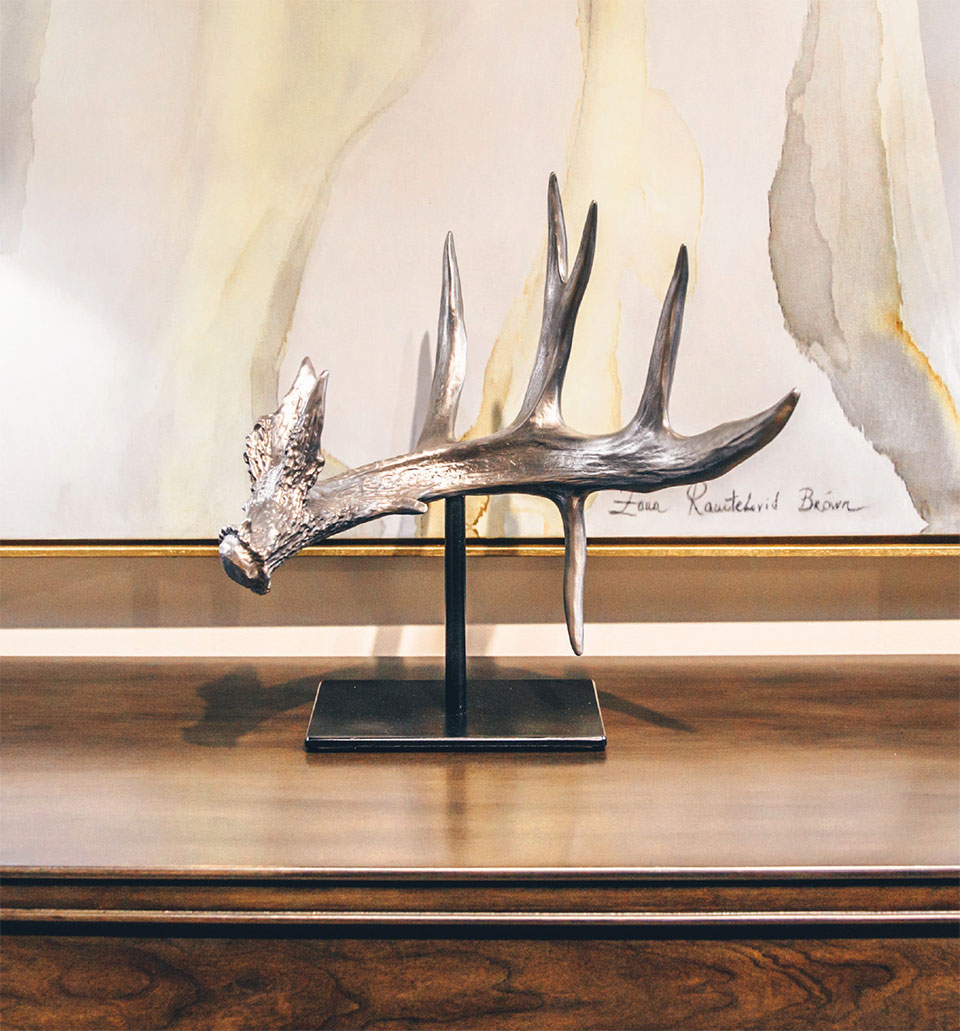 David Bzawy will tell you that he never really considered himself an environmentalist.

However, in the course of his yearly field research, he spends close to 200 days a year in the outdoors, where he formed a deep appreciation for the natural world. At one point in his 37-year career, he owned the largest whitetail outfitting operation in Canada. Attuned to the rhythms and subtle language of the land and the wildlife that roamed there, his appreciation was solidified in his being.

David might not say he is an artist either. Speak to him for any length of time, however, and he’ll eventually start to talk about how he finds art during his time in the field. “I can sit and look at a leaf that falls on my boot while I’m having my tea out in the woods and find myself taking it all in,” David explains. “I have quite a varied appreciation for art in general and am drawn to natural landscapes.”

Combining those two elements, it’s easy to imagine the genesis of Antler Design Concepts. David, the whitetail outfitter in the field picking up a shed antler and admiring it. David finding a particularly impressive or unique antler and conceding its beauty, but also knowing that he’s unable to part with an original piece, although wanting to still be able to share its uniqueness and rarity with others. As he says, “Each original antler is truly one of a kind. As with snowflakes, no two are ever exactly alike. Our molding and pouring process allows for every intricate detail to come through in the replication process. 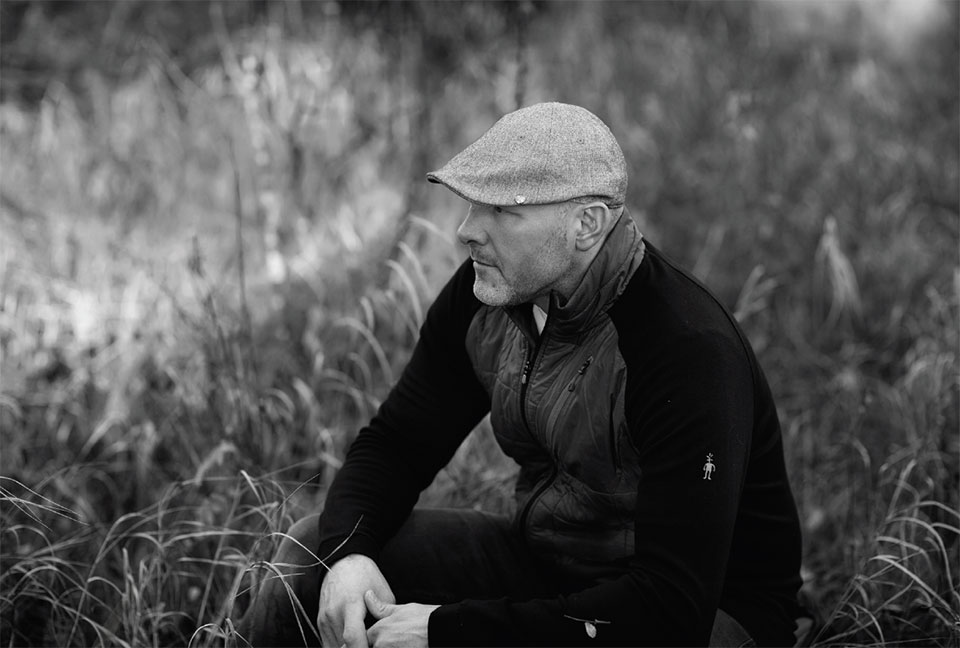 “I can sit and look at a leaf that falls on my boot while I’m having my tea out in the woods and find myself taking it all in.” 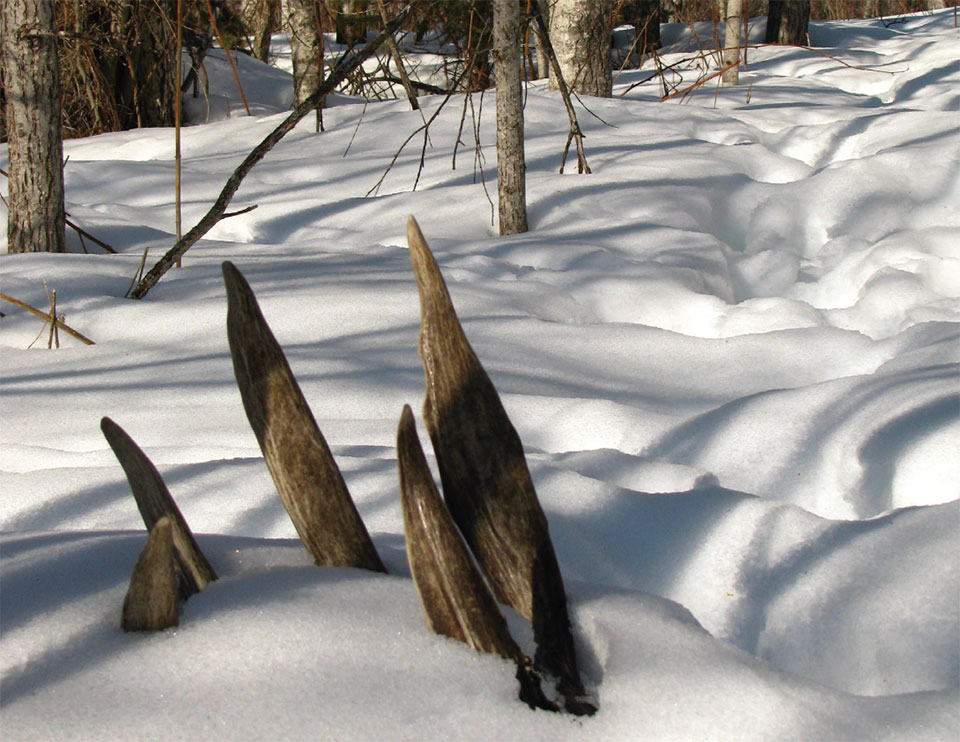 “There’s a story behind every one of them. Some of them are shed off bucks that, in some cases, I’ve known for ten years or more. And I just could never part with an original piece. Being able to offer a replica to anyone with a true appreciation for what nature sculpted and created was an original concept, but what became more important to us was the quest to have them replicated in an exacting way and maintaining their exclusivity at the same time.”

Antlers in the wild degrade over time and David and Lisa, his wife and business partner, sought to offer something more permanent. They wanted to have something that showcased the art that David found in nature in a worthy, gallery-quality piece. They create special pieces for special spaces.

David’s sheer effort in spending time and boot miles to find and curate such a collection of rare and unique original pieces is one thing. Finding the partner to start the replication process to make them into gallery-quality collectables was another, especially when there is a deep commitment to doing things right. “I’ve seen the effects of climate change in some parts of where we operate. And if we were going to go into the home furnishings world, I did not want to mass produce a product and get it shipped from overseas. We wanted to do it with more integrity, something that is part of the solution rather than the problem.”

David and Lisa found the people they were looking for in Loveland, Colorado. “I’ll never forget the day we got to see and hold our first finished product after it was poured at the foundry. We were just amazed. They were even more beautiful than the original antler. The detail they have been able to capture in our pieces is amazing,” says Lisa. The technique, known as the Lost Wax Casting Process, is able to generate the level of accuracy David and Lisa envisioned.

“We wanted to do it with more integrity, something that is part of the solution rather than the problem.” 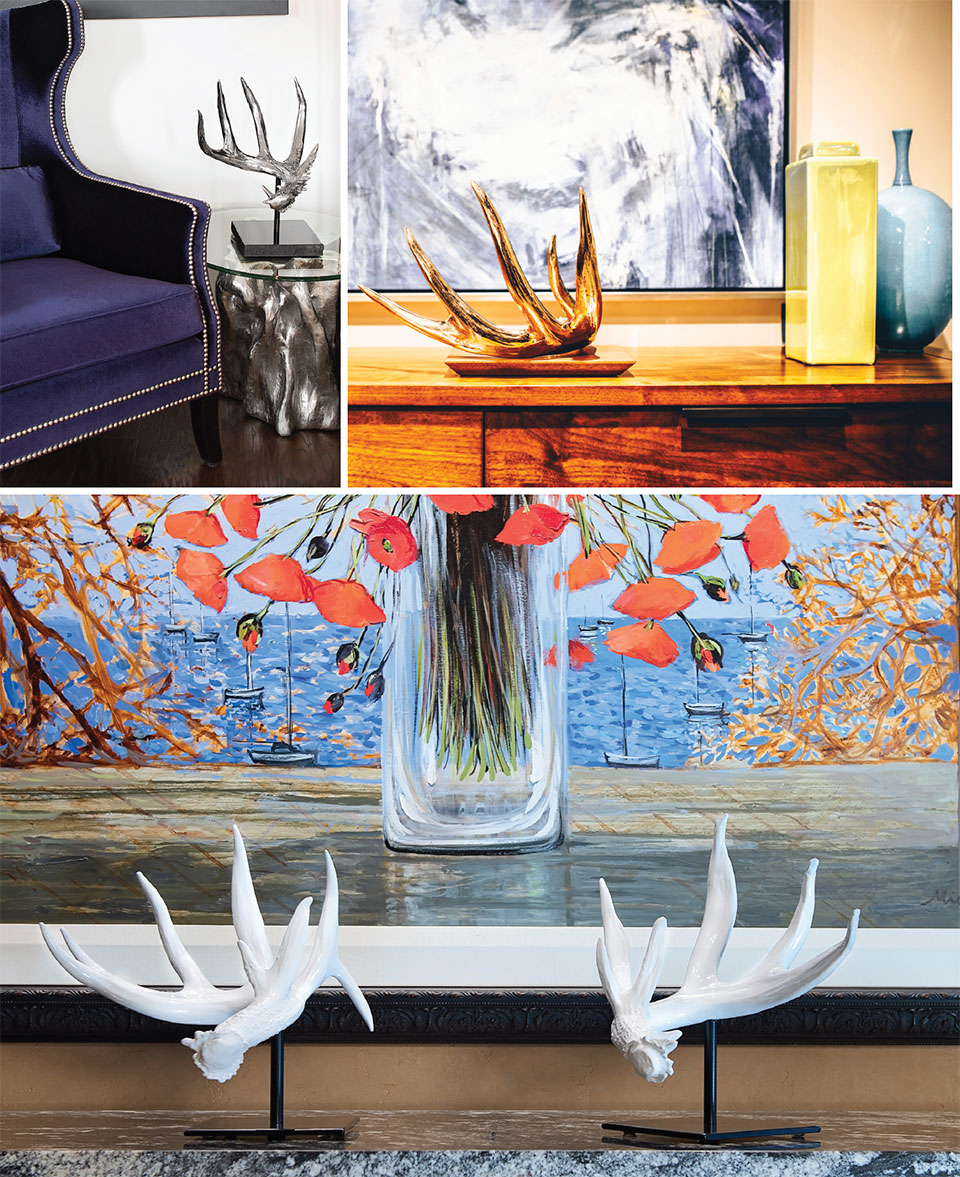 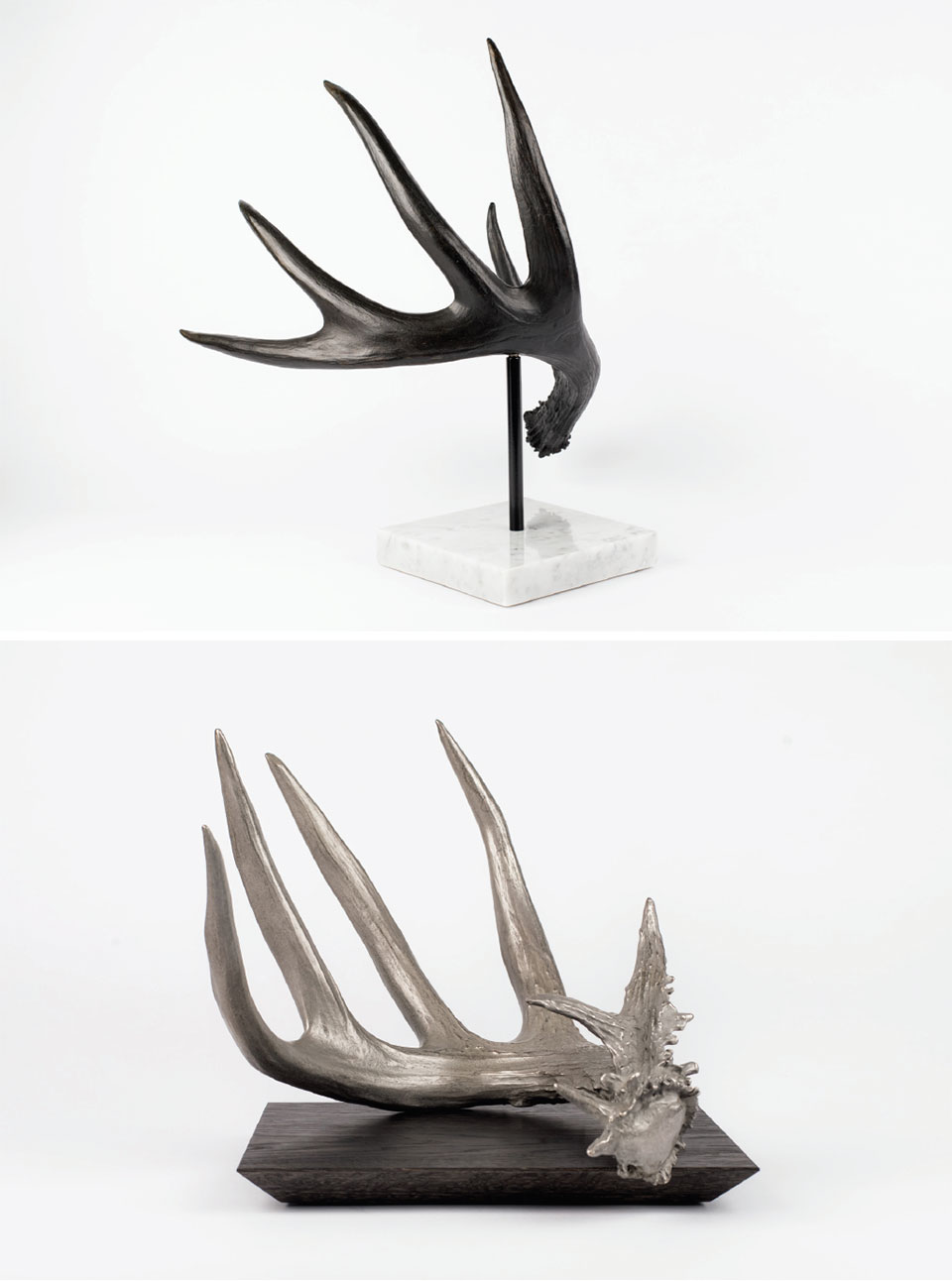 Customizable in a variety of colors and finishes, these stunning solid Bronze pieces are shown in a Matte Black Patina on a white Carrara Marble base, and a Silver Nitrate Patina on a hand made Ebonized Oiled Walnut plinth.

Just as important as the “what” and “how” is the “by whom” for David and Lisa. Their commitment to keep production in North America is grounded not just in the high quality of the work, but also in a consciousness of responsibility to a greater community. Supporting a more local approach and keeping production short-range and built slowly by hand in small batches where the craftspeople are true artisans are key components of their vision. “Every piece is the product of hard-working North American hands, individuals who have families and who contribute in many ways to the communities in which they live,” David says with unmistakable pride.

Quality materials and meaningful stories behind these pieces have created a conduit of connection to the land and the natural world around us. Through this alliance of hunter/gatherer and master craftsmen, Antler Design Concepts now produces exactly what it set out to create—gallery-quality art born from what David finds in the field. Three collections are available in varied degrees of size as well as exclusivity. The largest, most unique pieces comprise the numbered Limited Edition Gallery Series. The Select and Classic Series round out the offerings. Throughout the entire collection there is a level of exclusivity. “We purposely don’t make them widely available,” David adds.

“Every piece is the product of hard-working North American hands, individuals who have families and who contribute in many ways to the communities in which they live.”

Once one of these pieces occupies a space within a home, cabin, or office, the quality is overwhelming. Not only visually, but by its heft. While a photo might hint at its beauty, the experience of holding one or admiring it in person is a different experience altogether. It’s as if you can feel the energy of the buck alive in the metal. David explains, “The older a buck gets, the more special it becomes. To survive many harsh winters and the predation from wolves, coyotes, mountain lions (not to mention the hunting season), it becomes a pretty special buck. They’re unbelievable specimens. Some of them I’ve gotten to know quite well. Even named them.”

The unlikely event that one of these art pieces falls out of favor has also been considered. “We wanted to use a sustainable product. Recycled American bronze and Canadian stainless steel are the two metals used and both are fully recyclable. They can be returned back into the original material,” explains David. It would be hard to imagine that ever happening however, as the pieces exhibit a remarkable permanence, and these found objects can and will be appreciated for generations to come.