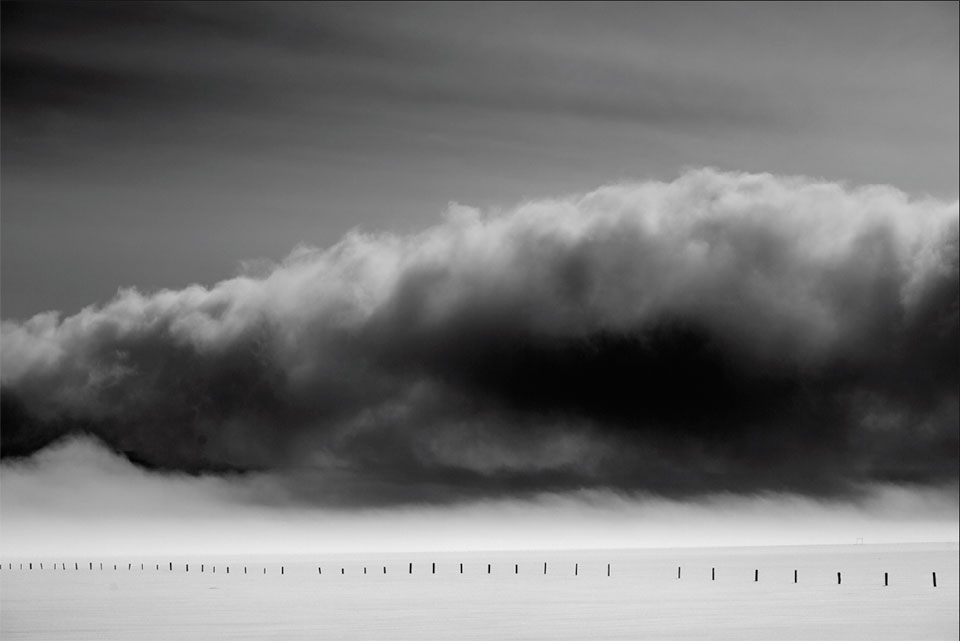 A Search for Transcendence

“When we try to show everything, we see nothing.”
–Kene Sperry, Kene Sperry Photographer 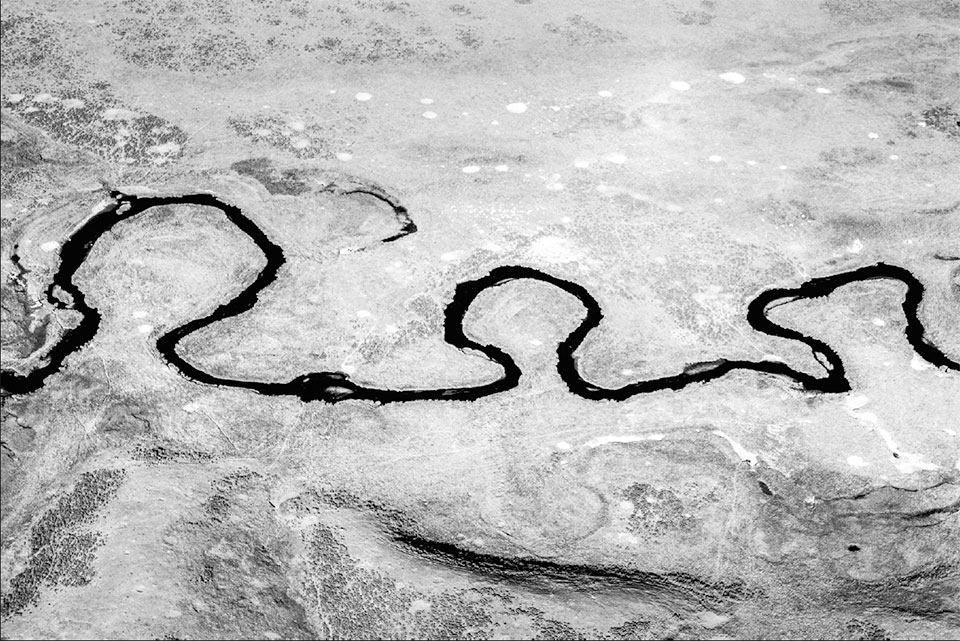 In Kene Sperry’s  photo, Island Park Winter, the clouds hover  above the valley as a powerful  force of nature. The vision  tells a story of water being transformed by light, wind, warmth, and cold.  The  horizon divides the  frozen moisture on the ground—the snow—from the  liquid and gas moisture  in the sky—the clouds. The fence line reminds us of our human presence and  our  need to tame nature, but nature reigns supreme. The scene in the photo induces deep presence in that one moment, helps us feel humbled, and moves us beyond self to connectedness with nature and each other.

Hearing  someone speak, you might not recall the specific words spoken, but you will remember the feelings shared. Similarly,  photographic arts transcend mundane imagery and generate an emotive reaction.  Kene  Sperry  shares, “When we try to show everything, we see nothing. How do I  encapsulate  a  feeling of a place or a moment in time  with  a  single  image? A small change of perspective or  a  fraction of a second  is sometimes  the difference between  a documented picture and a photograph that brings deep  emotions.” 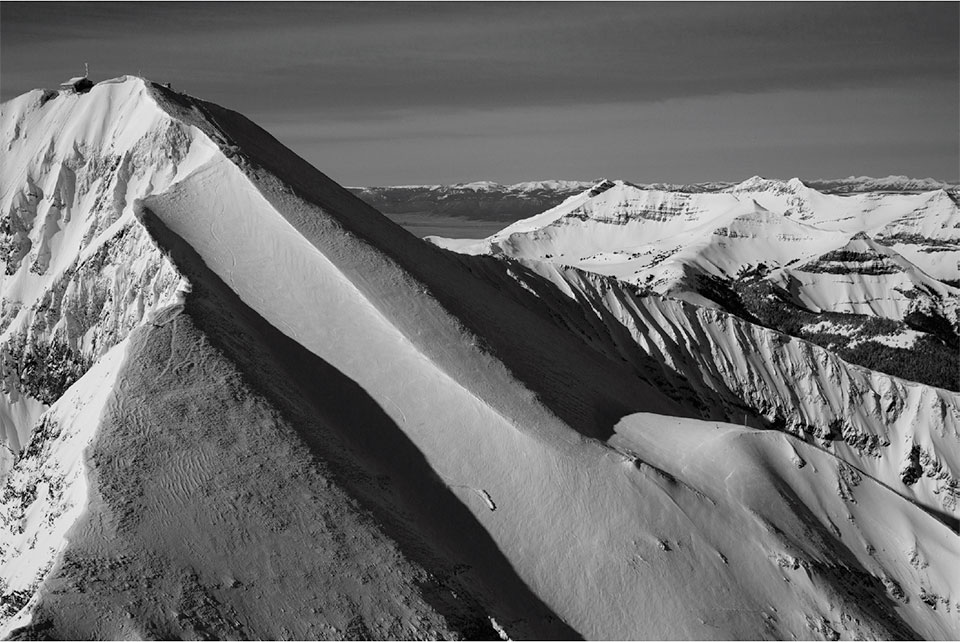 In  Lines IV, a lone skier faces  the summit of  Lone Peak  and descends the iconic  mountain’s north face. The skier is barely visible  but leaves S-lines  behind him, giving the viewer a glimpse of where that skier has been. We anticipate  where the skier is going  and where the next turn will be. While the photograph captures only a moment of  the skier’s journey, we are able to  sense the entire path he takes. 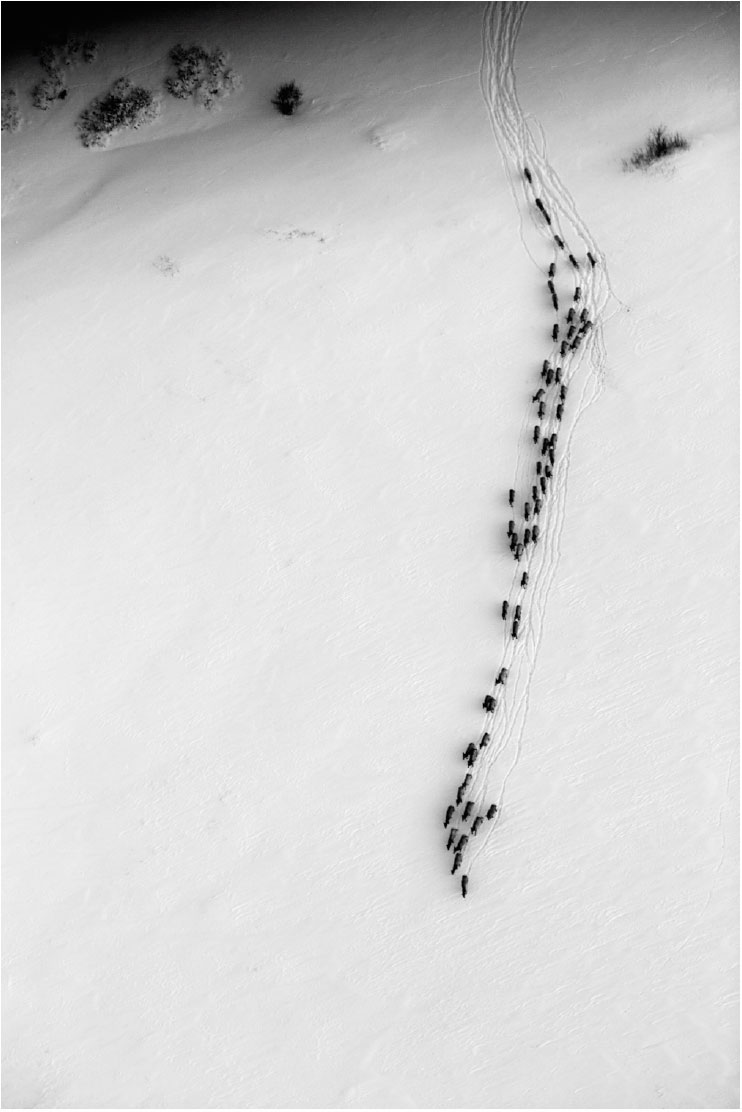 The emotional responses  to  Lines IV  vary  with  the viewer. For an extreme skier, or any  advanced  skier who has experienced open bowls, steep pitches,  and untouched powder, feelings of adrenaline and bliss may be felt. For others, the danger of the unknown creates fear about the risk of the skier losing control or triggering an avalanche. The  skier’s context—a mere human speck on an alpine face in the Rocky Mountains—can produce a wonderment and awe for many viewers.

Lone Mountain Land Company hired  Kene  and a Bozeman-based helicopter company to capture the grandness of  the  Big Sky  region.  Kene  says, “For people to understand the scale of the area, we had to photograph from the air.  The  casual skier, visitor, or recreationalist doesn’t  always comprehend  the massiveness of the place. I was charged with capturing not just the obvious  natural beauty of the area, but the expanse of it, the human experience within it, and the powerful emotions evoked by it.”

Shooting from a helicopter  is not unfamiliar to  Kene.  The helicopter allows access  to locations  and angles that are not  available  otherwise. People travel from all over the world to see the wonders of  the  Yellowstone  region  and most only see it from a  vehicle, boardwalk, or trail.  From the sky,  Kene  has been able to photograph from the Madison River Valley, across the Gallatin and Beartooth ranges, and into Yellowstone National Park. The results are photographs  that change one’s perspective of place. 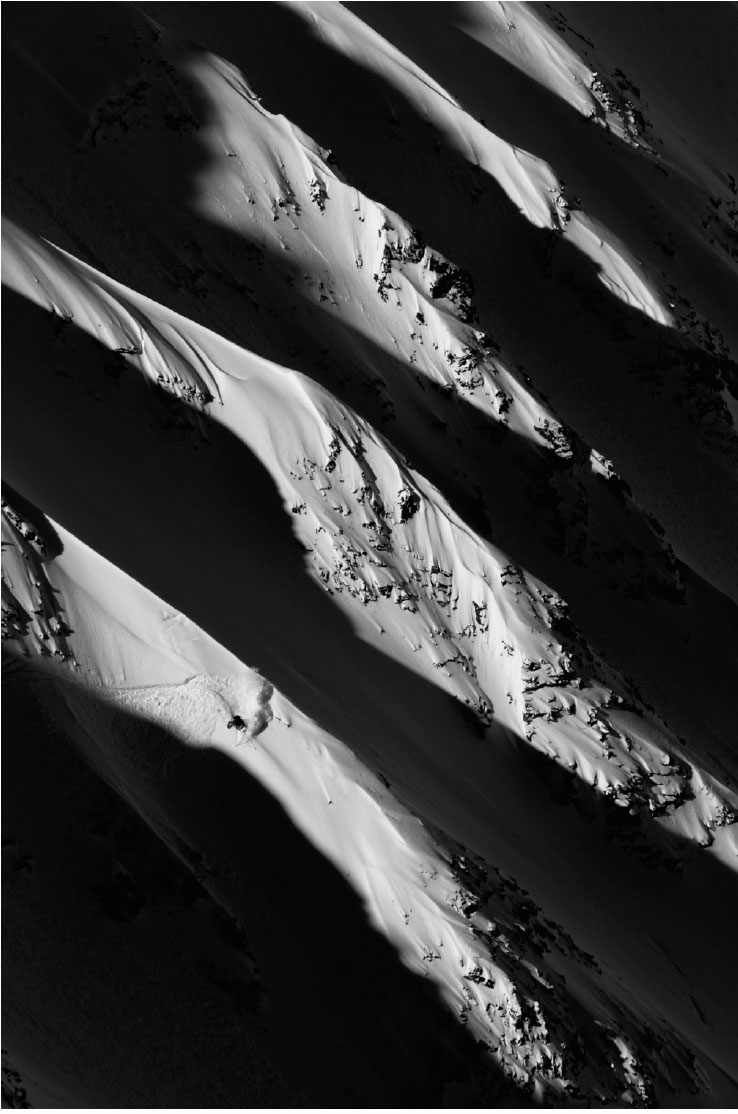 “I was charged with capturing not just the obvious natural beauty of the Big Sky area, but the expanse of it, the human experience within it, and the powerful emotions evoked by it.”
–Kene Sperry, Kene Sperry Photographer

Kene  describes his experience working with  elite chopper pilot,  Mark  Taylor.  He  says, “When I’m on a helicopter shoot, Mark and I are communicating on our headsets and plotting our moves. He is a master pilot who can maneuver me to a very specific altitude or angle. A hundred feet can make all the difference in the shot.”

In  Kene’s  early history of photography, he  shot landscapes  but wanted to expand his artistry. He  started  photographing  people because he found the one-on-one connections personally rewarding. He  has  traveled  to India and the Himalayas, drawing inspiration from communities of people living life in their native cultures. Through these experiences, Kene  developed a passion for intimate wedding photography. He shares, “Weddings  are  a tribe of  humans in a safe place all joined for one purpose. You go to a wedding and you get a glimpse into the souls attending.  I search for the eyes and  the human expressions  in  these pivotal  moments. Weddings are rites of passage,  momentous occasions,  and full of emotions.”  Kene  has traveled  all over the world  for these once-in-a-lifetime events  capturing over 400 weddings  including high-end clients such as  celebrities and politicians. 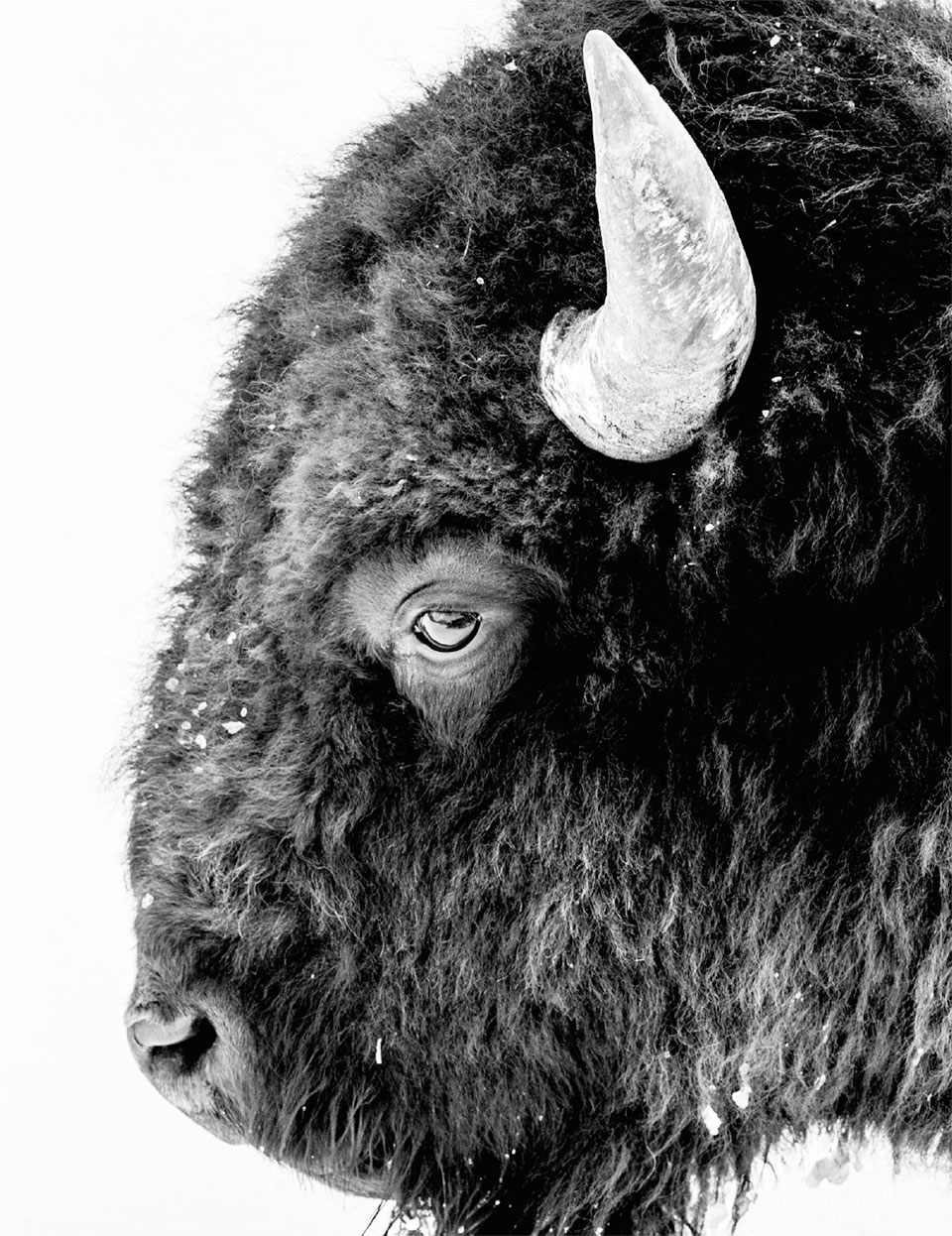 Many Montana homes are located in  a region  with large  wilderness areas where residents don’t  necessarily have easy  access to  them.  Accessing the miles of trails on public lands requires hiking, horseback riding, backcountry skiing, backpacking, or climbing  and the more remote the area is, the more difficult it is to experience it first-hand.  Through his photography,  Kene  is able to bring that wilderness and nature  into people’s homes and hearts. 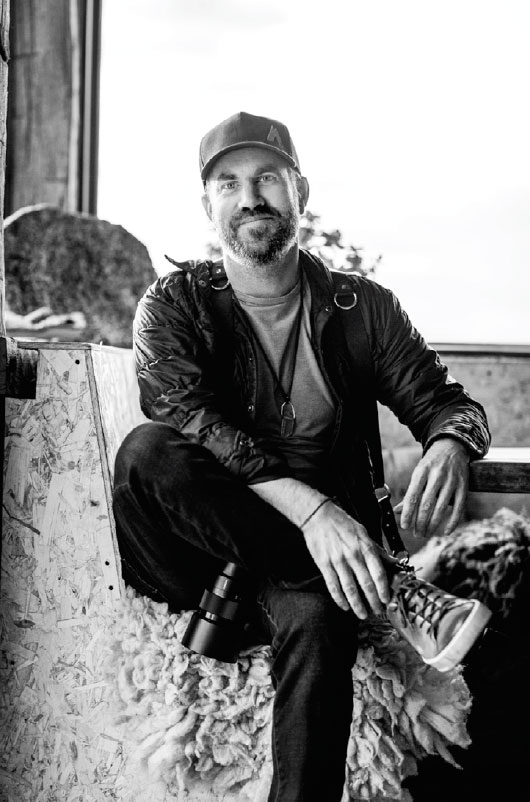 During a customized process for photographing homes,  Kene  first  brings in an architectural photographer who studies the interior space and relationship with the exterior environment.  Kene  and his partners  then do a rendering with several different styles of photos. They consider the options and how the ambient and interior light works together in  that  particular space. The client is able to see the photographic print  displayed in different places, under different lighting conditions,  and during different times of day—morning to midday to evening.

“You can’t be the Observer without knowing you are being Observed; to me it is simply opening your heart and eyes while being in the present moment.”
–Kene Sperry, Kene Sperry Photographer

Kene  reflects on his process, “Art is so personal. When I work with a client, I work with an emotional being who is making a decision for  their  physical space. I am a guide and educator who will offer tools to support the client’s decision-making process. Through photography,  I offer  access to  a mostly inaccessible region,  art for  the home to fit the client’s emotions,  and  a process to individualize each piece.” 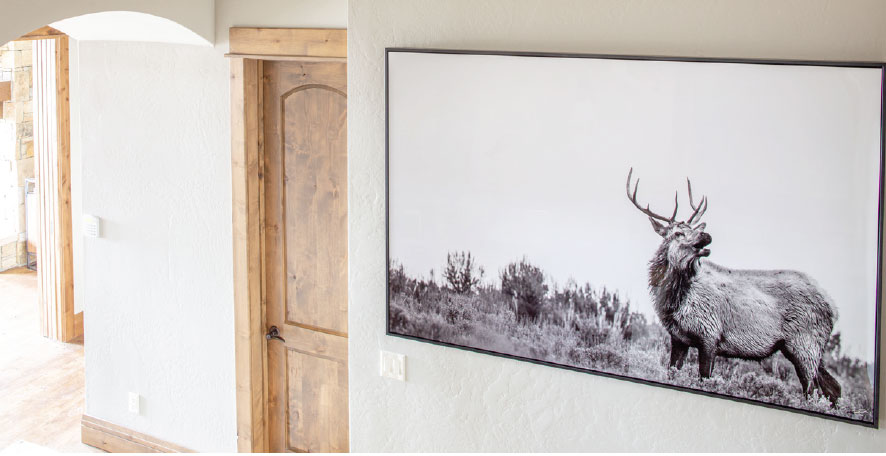 From a young age, art deeply influenced  Kene, made an impact on his spirit, and amplified his ability to connect with people. He appreciates the opportunities that art has given him and desires to pass it to the next generation.  Kene  works with the Yellowstone Club Community Foundation to support art programs in the schools. He says, “I would not be where I am now without the art  I had access to in school. Whether it’s working with kids in the schools or folks in their homes,  I  am committed  to  helping people in their search for transcending and making connections between  their  physical environments and  their  emotional spaces.” 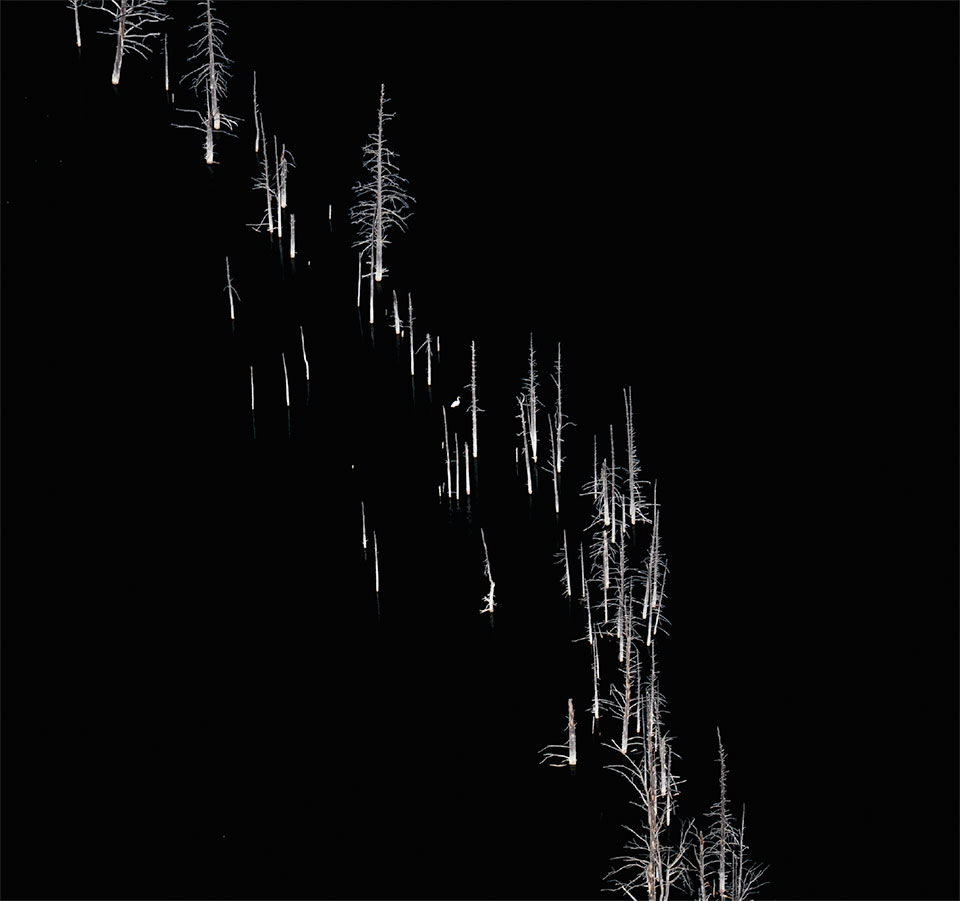