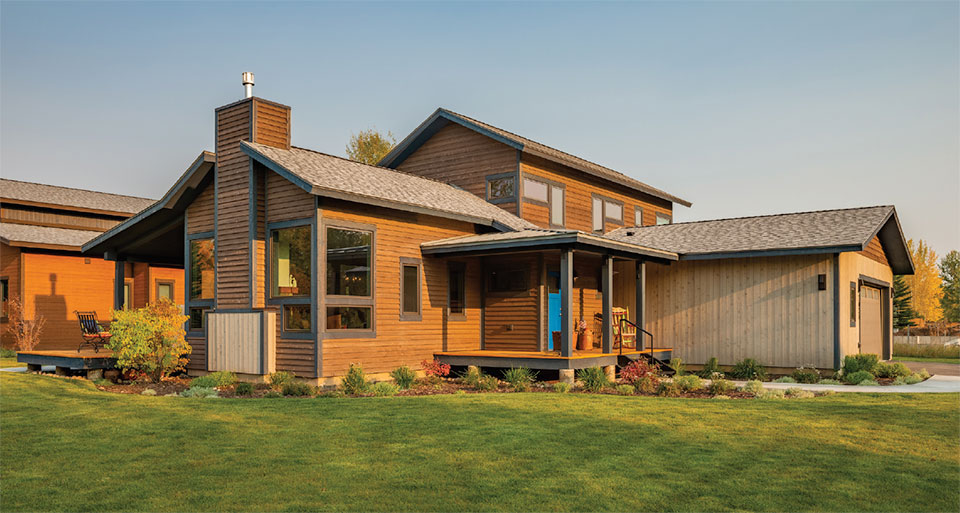 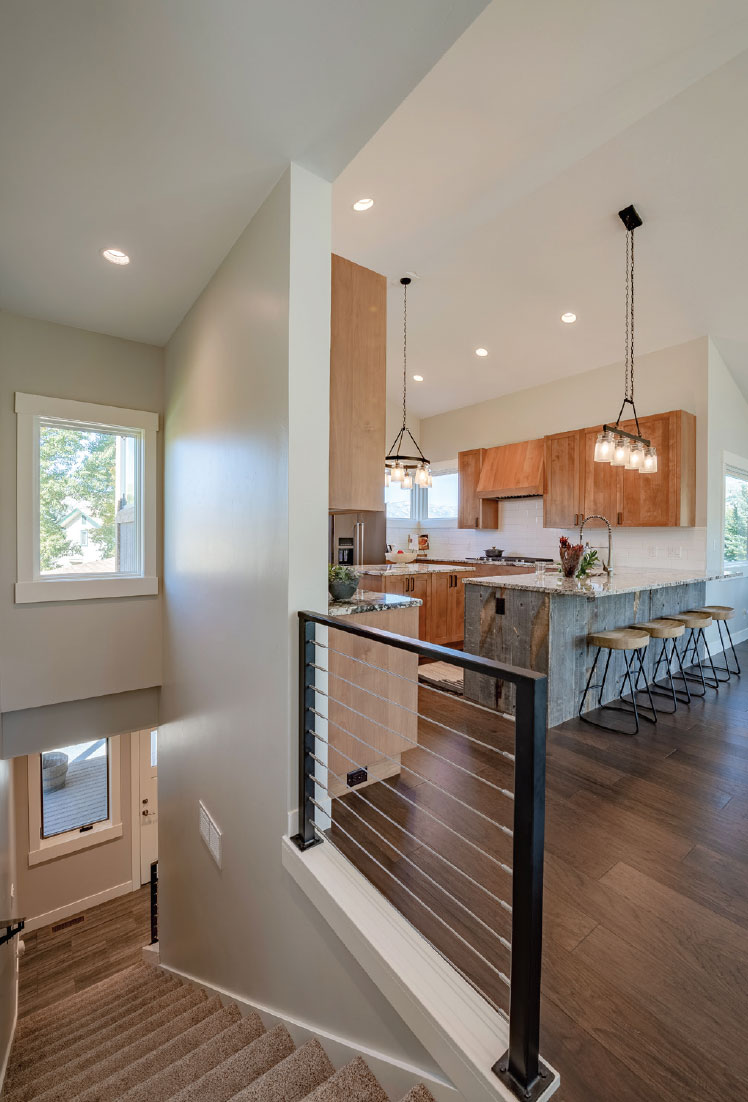 Few things in Jackson level the playing field between transplants and locals more than finding quality housing in the Valley. Recently, the Mountain West News Bureau and Wyoming Public Radio published a report on Jackson’s housing crisis. The research revealed arresting realities of the market, such as a 55-acre private residence that was listed for $65M and sold for an undisclosed amount; or the fact that one individual investor bought 25 condos in the $400,000 – $1.8M range; or that two journalists who worked for the local paper had to split a three-bedroom house with four other people (before moving back home to Indiana).

Pre-pandemic, many transplants came for ski season and never left. However, when the lockdown hit and people wanted to be around, well, fewer people, more families began relocating to Jackson. With that, they ran head-first into their own version of a quality housing crisis. Zoom families added to an already competitive housing landscape as more people wanted to try out life in a premier mountain town.

But what about the locals? Professionals already living and working in the Valley have been faced with a tight housing market for years. Enter Cottonwood Park Homes, a community of high-quality, custom-built single-family homes located on the south side of town and available for long-term rentals. The eight homes were envisioned by longtime Jackson landowners, the Frew/Oliver Family, and brought to life by Jackson-based Dubbe Moulder Architects. 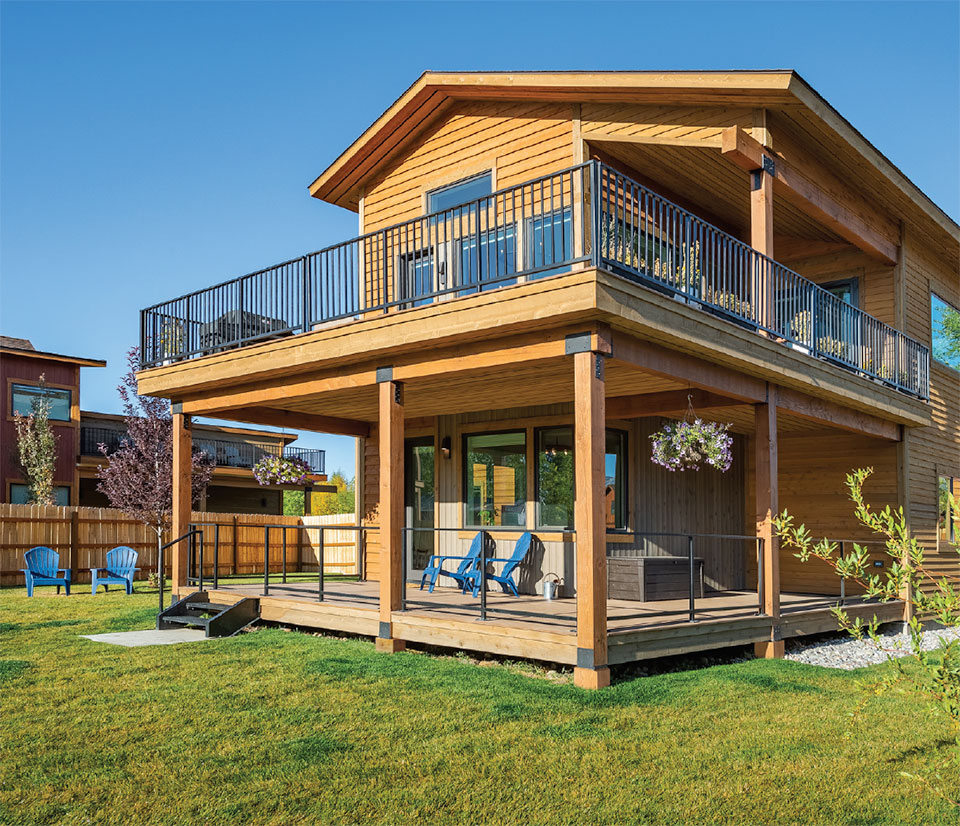 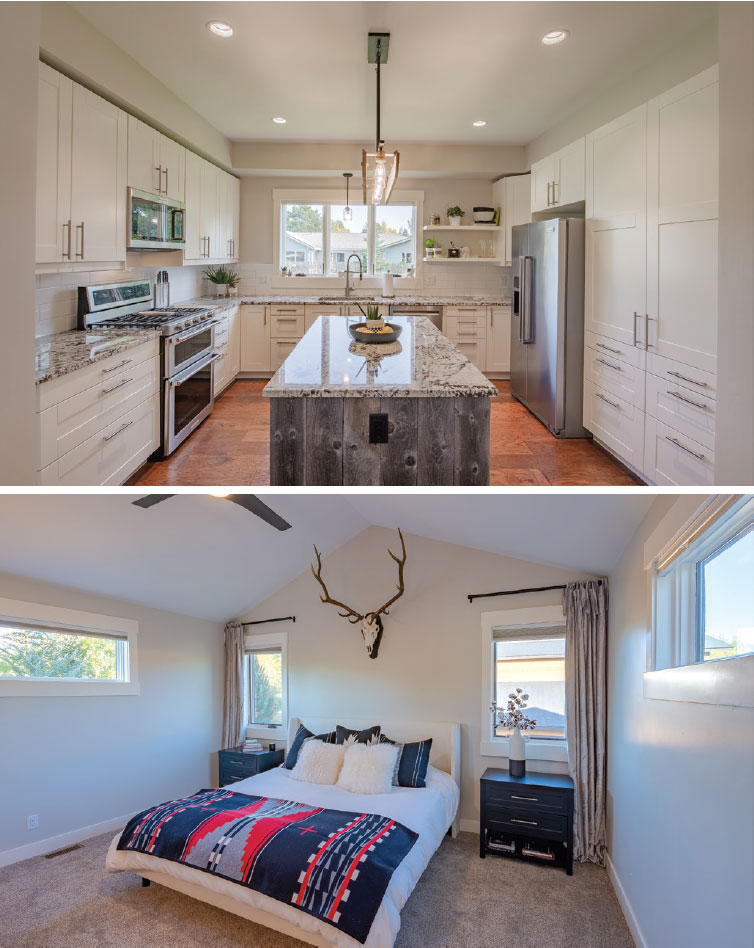 The origins of the Frew/Oliver Family in Jackson Hole began in the summer of 1925 when Margarette and William Frew brought their daughters, Emily and Peg, to the Bar BC guest ranch from their home in Pittsburgh, Pennsylvania. The following year, the Frews bought roughly 135 acres on the south side of the Bar BC Ranch holdings near Moose, at the confluence of Cottonwood Creek and the Snake River. Subsequently, they built a fishing and horseback retreat to enjoy with friends.

In the spring of 1932, the eldest daughter, Emily, married Henry Oliver, Jr. The young couple enjoyed visiting the family’s retreat during the summer months. Emily’s mother, Margarette, died in the fall of 1949, and Emily inherited the property that was called the Four Lazy F Ranch. The name was derived from the “4 Lazy Frews,” an accurate appellation for their bucolic retreat. To offset the maintenance costs of the land, Emily and Henry decided to open a dude ranch. They began operating in June 1950 and continued until Emily’s death in 2010. The property is now part of Grand Teton National Park.

After WWII ended, Americans began traveling again. With new and abundant tourist pressure, Snake River fisheries were impacted, so Henry pursued alternate fishing opportunities for ranch guests. One came along in the form of 200 acres at the south end of Spring Gulch near the Town of Jackson that he purchased in 1954. He made several additional purchases along Spring Creek in South Park with the same goal of reducing impact while offering a way for people to connect with the environment and plentiful sources for outdoor recreation that Jackson had to offer. When Henry died in 1977, he and Emily owned about 1,500 acres along Spring Creek south and west of town.

At that time in our country’s tax history, when the first spouse died, there was an accounting of the couples’ holdings and inheritance tax was due on the deceased member’s portion. Emily was faced with a challenging situation because the assessed value of the property during the late 1970s was not in line with the appraisal that valued the property’s intrinsic agricultural worth. The IRS challenged the family’s appraiser, and when settlement was reached it became obvious that cattle and fishing were no longer going to be sustainable. Subdivision and development were the future. Jackson Hole and the West were changing. 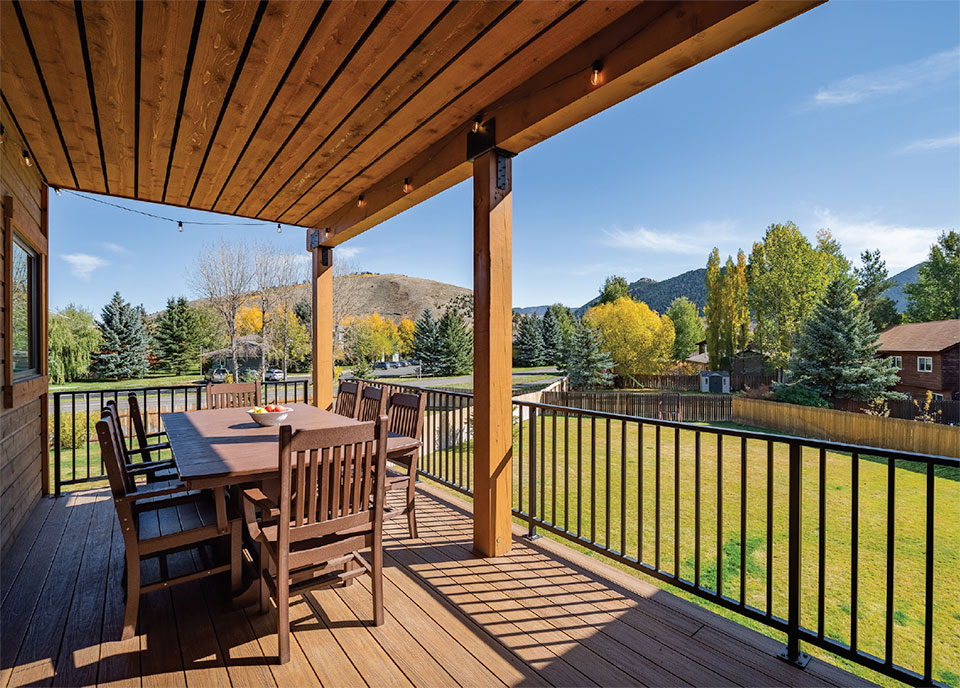 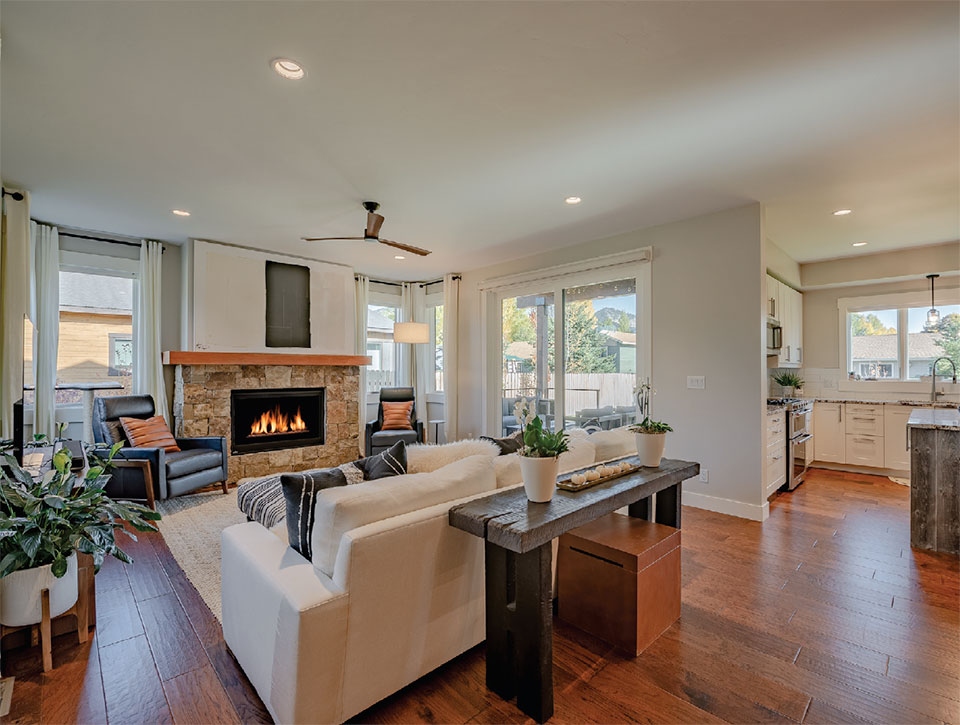 In 1980, the two Oliver brothers, Harry and Bucky, began the development of Cottonwood Park with the annexation of 160 acres into the Town of Jackson. With the cows sold for cash that was needed for planning and development, they had doubts about whether they made the right decision. Eventually, with a changing economy and the sale of other ranch holdings, the future outlook improved. They built an apartment complex called Blair Place, named for the family that had farmed the property prior to Oliver ownership, and sold the balance of the South Park ranch in 2002, which became 3 Creek Golf Course. They still hold 275 acres at the mouth of Spring Gulch that is shared with four of the six generations of the original Frew/Oliver Family. Among that land are the Cottonwood Park lots on Whitehouse Drive where over the past few years they built eight custom homes. The vision was to provide rentals for professional families living in Jackson who were seeking quality housing so that they could continue to live, work, and contribute to the community just as the Frew/Oliver family has for almost 100 years.

In addition to offering access to a more diverse group of products, partnering with these companies has allowed Ethan and his team to better manage their supply chain and shorten lead times—two central pieces of their fine-tuned process. At Old Goats, finding the best way to manage projects and applying some lessons learned from their time in corporate America sets them apart. They are happy to challenge old industry habits and find ways to improve the overall experience for their clients. For every job, they strive to combine creative design with high-quality process.

“It was an intriguing proposal and a noble mission with regard to the current housing issues here. As an architect, I was also attracted to the idea that the family did not want one or two cookie-cutter plans that are often what come to mind when you think of a developer building a subdivision.”
–-Chris Moulder, Principal Architect, Dubbe Moulder Architects 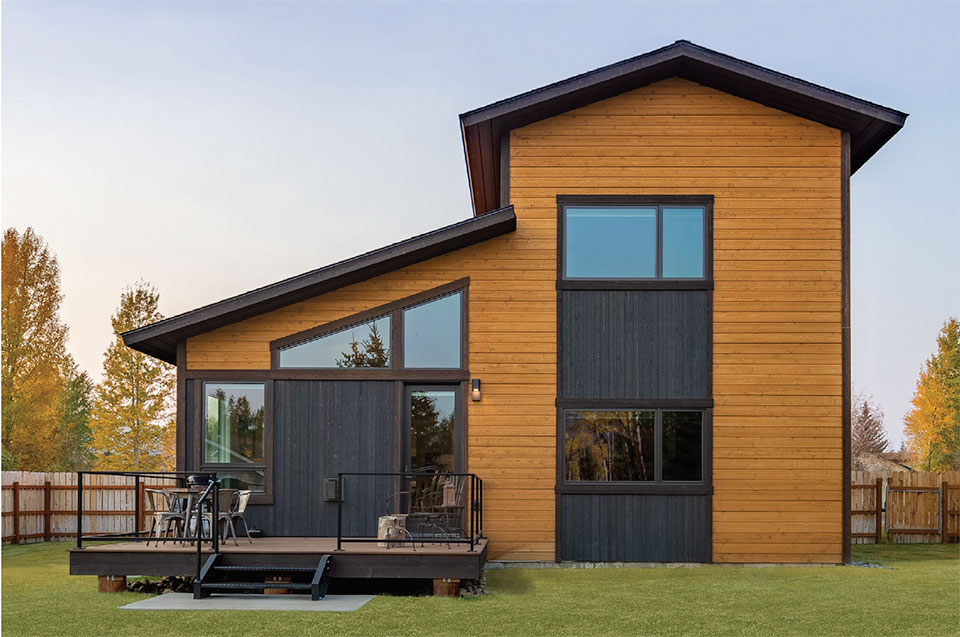 Dubbe Moulder Architects is an established architecture firm in Jackson Hole, Wyoming, and Driggs, Idaho, specializing in residential and commercial design, historic preservation, and master planning. The firm’s culture is not saddled to a single, predetermined style. Instead, they provide their clients with outstanding service from inception to completion and work with them to establish a program that achieves their unique design expectations and honors their budget. Their portfolio reveals hundreds of residences encompassing various square footages and architectural styles. The commonality is that they collaborate with their clients to realize homes they envision and will love to live in. 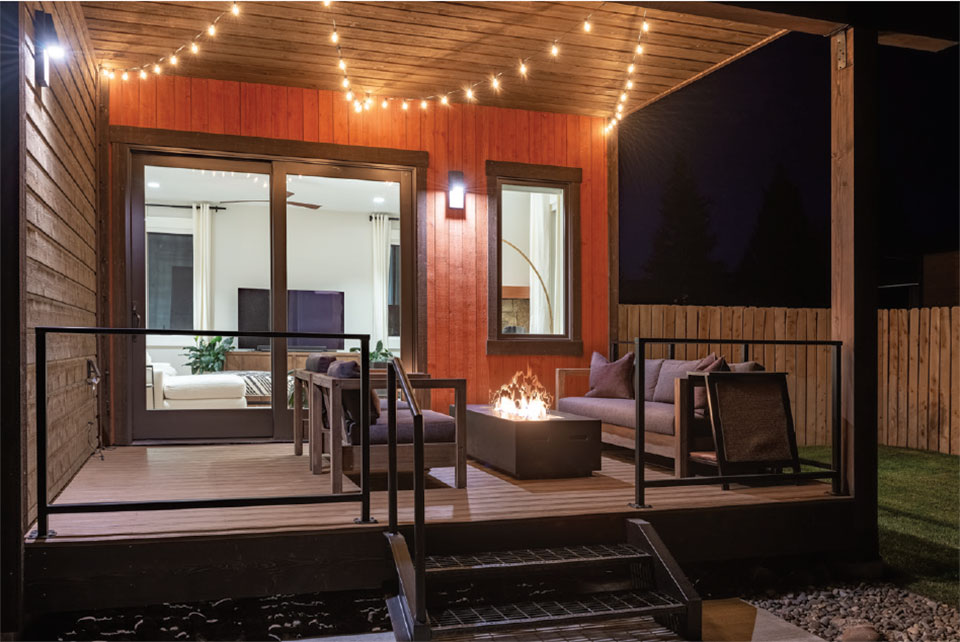 With decades of experience designing for the Jackson lifestyle, Chris Moulder, principal architect at Dubbe Moulder Architects, took the reins and began sketching what would become a new community on Whitehouse Drive. “It was an intriguing proposal and a noble mission with regard to the current housing issues here,” Moulder shares. “As an architect, I was also attracted to the idea that the family did not want one or two cookie-cutter plans that are often what come to mind when you think of a developer building a subdivision.”

As a truly custom community, Moulder drafted a unique plan for each property. Every house has the same core components that are centered around an open kitchen/dining/living arrangement. They’re 2,000- to 3,000-square-foot homes with three bedrooms and “flex rooms” that can be used for a multitude of functions like playrooms, offices, or guest rooms. Although they are all next to one another and share a common color palette and certain luxurious materials for continuity and scale, they have different environmental considerations, values, and components. “Every lot has different light qualities and view potential,” Moulder explains. “We were cognizant of that as well as the idea of respecting privacy so that you don’t see your neighbors in their bathrobes from your window even though the other home may be a stone’s throw away.” Some of the houses are single-floor and some are two-story. Some have living on the first floor while others have it on the second. That striation creates a sense of individuality down the street and throughout the community.

“Through their unique designs and quality, we hope that our houses on Whitehouse Drive provide our residents with a connection to the Valley’s history and attachment to nature as our family has enjoyed for six generations.”
–-Representative, Frew/Oliver Family

The homes with two-story living offer views of Snow King or glimpses of the Tetons over neighboring properties. As they went down the road designing each home, Dubbe Moulder approached each plan as a conversation with the environment. “It was an evolution with regard to the overall concept of the place,” Moulder says. “We prioritized the experience one could have in each of the houses so folks could truly enjoy living in our wonderful town,” he adds. In addition to dispersing where the families would physically be spending the most time in their homes, they designed ample garages – over 700 square feet each – large enough to park SUVs in and also comfortably store skis, kayaks, and other gear. For additional storage, Dubbe Moulder added attic trusses and tucked away cubbies throughout the houses. Building was completed this year and now all eight homes are on the market and serve as long-term rentals for professional families in Teton County.

Dubbe Moulder is led by its principals and founders, Kurt Dubbe, AIA, and Chris Moulder, AIA. They are clear communicators who offer service and solutions that are informed by place. Interestingly enough, although much of their work is in custom residential architecture, the Cottonwood Park homes are not the first community they have designed. Moulder cites another subdivision, King Eider, in Rafter J Ranch, where the firm designed custom homes for 14 of 24 lots. “Projects of this magnitude center on creating spaces that function for living and also that capture what might be the one available view from that particular lot,” Moulder says. The firm is adept at incorporating light and color – Moulder’s favorite elements to bring into his designs – and using architecture to highlight each lot’s assets internally. They take the time to understand their client’s goals and direction, and then propose substantive designs built on principles of longevity and what is right for the property and the client’s program.

“We adore the tranquility of the Valley,” a representative of the Frew/Oliver family comments. “Through their unique designs and quality, we hope that our houses on Whitehouse Drive provide our residents with a connection to the Valley’s history and attachment to nature as our family has enjoyed for six generations.” Indeed, the family’s legacy serves as a valuable example of how agriculture and conservation must be carefully managed within the framework of present-day socio-economic pressures.

Moulder himself moved to Jackson in 1989 and has been working in town as an architect ever since. Decades of experience mean that Dubbe Moulder is fluent in the local vernacular and also talented in designing in an array of architectural styles. “We embrace the unique opportunities for residential architecture that are part of Jackson’s culture,” he says. “I have talked to architects who work across the country designing cell phone towers, government buildings, and big box stores, one looking much the same as the other. Here, we have the resources and opportunity to create remarkable and unique residential work.”

In addition to running out of land to build on, the Jackson Hole region presents special climate-related challenges such as needing structures to withstand the potential of 150-degree temperature swings from summer’s hottest day to winter’s coldest or handle heavy snow potential, high winds, and earthquakes. “Architects in Tennessee don’t have to deal with those factors,” Moulder concedes. “But to work in a place such as this, and respect the place such as this, and respect the history of it? To me, that is what being an architect is all about.”