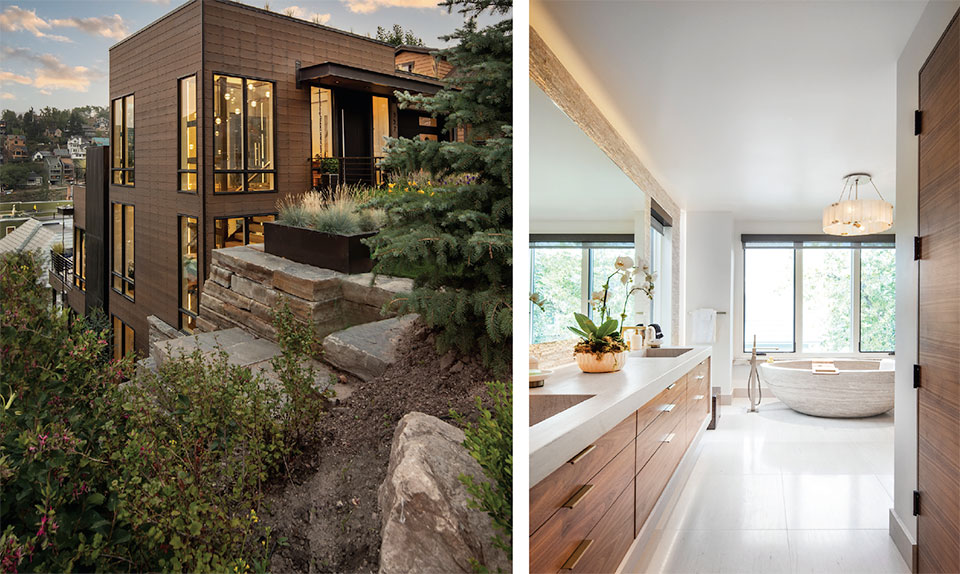 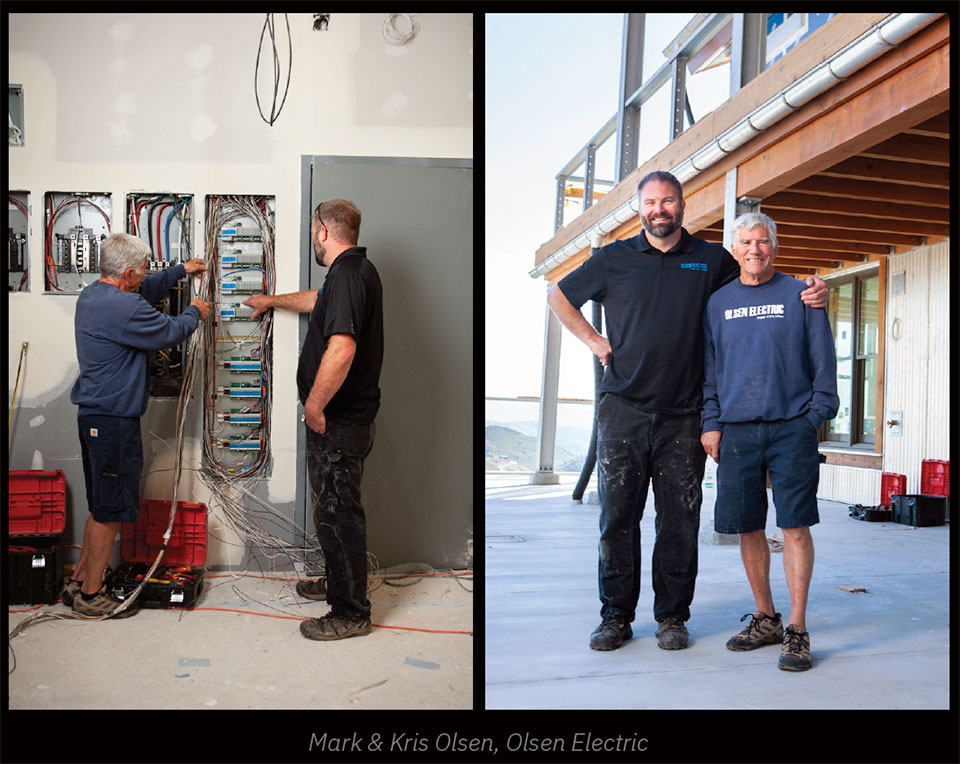 Early in the morning on Thanksgiving Day, 1975, three Michigan ski bum friends left Heber City, Utah, where they’d stayed the night, having traveled from Steamboat Springs the day before. They were bound for Lake Tahoe. Then someone mentioned that they had forgotten to get coffee. And breakfast. Fortunately, for this story, the next exit was Park City, where a parking lot attendant would alter the course of their lives.

The story of Olsen Electric, established in 1983, and to date, the longest running electrical-based company in Park City, is one of legacy– along with knowledge, experience, talent, and spirit –now four generations strong. “My grandfather graduated college as an electrical engineer and physicist,” explains Mark. “He worked on the Manhattan Project during WWII, then came back to Michigan and opened an electrical contracting business. My father started working with him, then he took over the business and put me and my brother to work.” Not only did Mark and his brother learn the electrical trade, but they learned in such a way as to endow them with the rare gift of generationally-taught quality and skill.

More than anyone else in the family though, Mark was hooked on skiing. He took a year off from college, which turned into five years bumming around Colorado. Then, Lake Tahoe beckoned for a change of pace. When the trio drove into the Park City Resort base lot that day in 1975, hoping for coffee and a look around, they were flagged down by the attendant who told them they couldn’t park their Toyota Land Cruiser pulling a small travel trailer. Says Mark, “When he learned where we were headed, he called us a few idiot names, said the price of season passes in California would be twice as high as Park City, that there were no places to live within 60 miles of the place, and furthermore, no jobs were available there, but here in Park City, he said, they’re still looking for people to work on the mountain.” Two hours later – ski bums are easily distracted – they had moved into an available apartment. Two of the three never left. 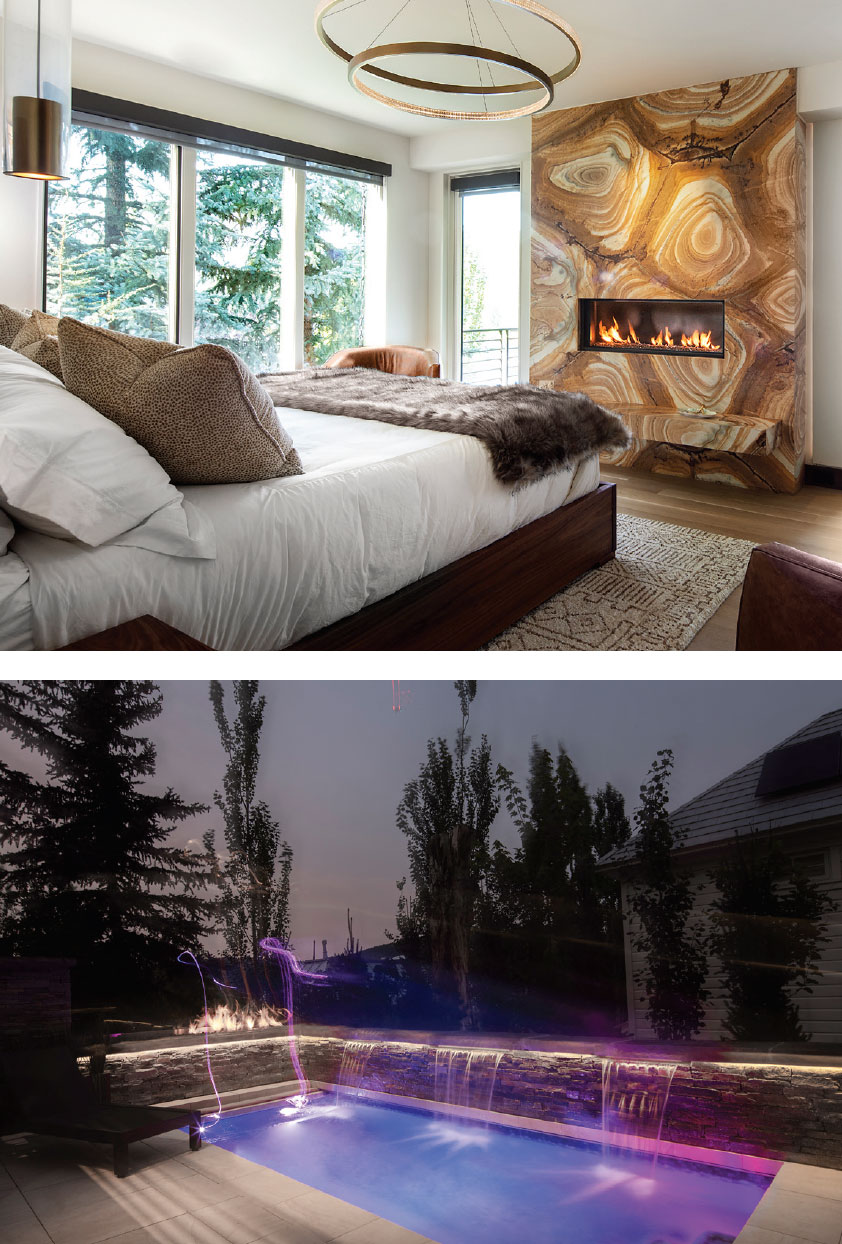 “When he learned where we were headed, he called us a few idiot names, said the price of season passes in California would be twice as high as Park City, that there were no places to live within 60 miles…”
-Mark Olsen, Olsen Electric

Apart from skiing, Mark did some electrical work on the side, eventually hiring on with different companies for a few years. When the last one went bankrupt he was out of a job. Those companies still hiring wanted apprentices, not master electricians, which he’d become, so he went and got his contractor’s license. At the time, Park City had few electrical contractors and it was a little easier to get a foot in some doors, but 40 years later and true to a good reputation, Olsen Electric has never had to advertise for business. Or votes either. They’ve placed in Park City’s Best since the inception of the yearly awards, taking top honors twice, one of those years with Olsen Electric first and Mark Olsen third. 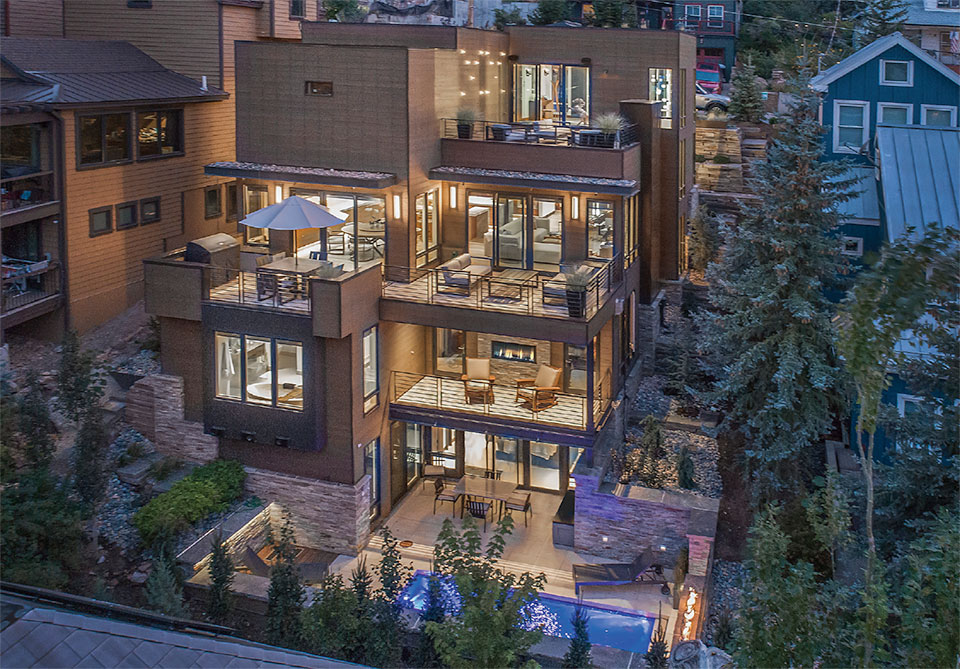 “In the early days I would just meet with contractors and ask if I could throw a bid at ‘em,” says Mark. “If you got your foot in the door and did a good job, you’d get repeat business.” Mark then spent decades developing and cultivating relationships with contractors. Today, they work with builders such as Black Dog, Papineau, and Wheeler, Bill Hart, Keim, and Bush Construction Companies for custom homes and remodels. They’ve worked on numerous projects designed by Glenn Johnson and Adaptive Design Group, innovative and artistic lighting design experts. While Olsen Electric also installs various home technologies – audio visual, specialized power management systems, backup generators, heat tape – their primary focus remains custom homes. Currently, they have at least six new homes under construction and ten or more remodels in progress.

Today, with three generations predating him, Kris Olsen, Mark’s son and vice president of the company, proudly continues the same business model with builders, and strives to maintain a new generation of expert electricians. “It’s important to keep that relationship with the builder intact and healthy,” says Kris. “It benefits us and it benefits the client.” 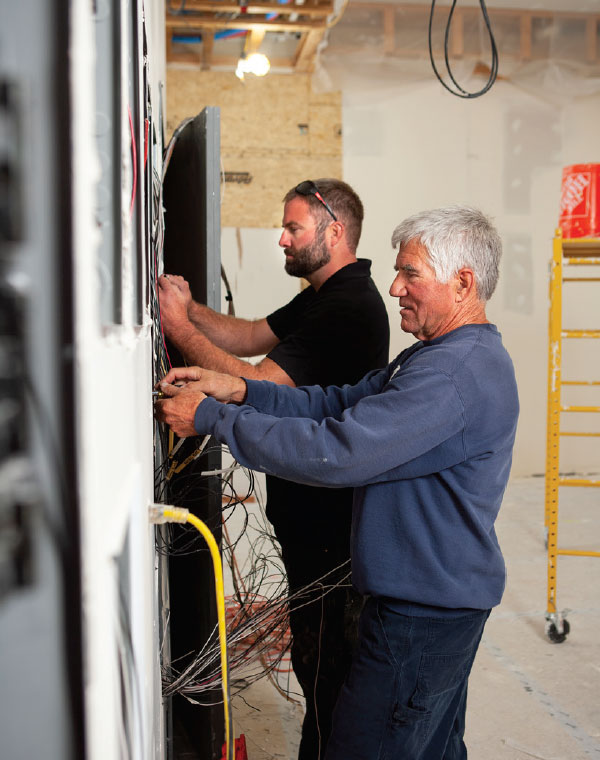 “As an electrician you quickly learn that you have to be the most knowledgeable and the most skilled on the job, but you’re also going to be the most scrutinized. We’re in every wall, ceiling, floor, in every piece of material you can think of, whether it’s underground, above ground, concrete, stone, gypsum, wood, tile, or granite. You name it, we’re working in it, so we have to be extremely versatile.”
-Kris Olsen, Olsen Electric

Like Mark did with his dad, Kris began working in the trade alongside Mark while in his teens. But as for passing the torch, Mark tried to talk Kris out of the line of work. Says Kris, “It wasn’t anything against the trade itself, I think he just wanted a better future for me, but I actually really enjoyed it.” From Kris’ perspective, the viewpoint on the trades as a career choice has changed in the last 20 years, and he credits in part the HGTV channel for changing a level of stigma and stereotype for a blue-collar career. Kris continues, “As an electrician in general, you need continuing education every two years, and in order to get a journeyman’s license in Utah, you have to pass one of the hardest tests in the nation.”

“As an electrician you quickly learn that you have to be the most knowledgeable and the most skilled on the job, but you’re also going to be the most scrutinized,” explains Kris. “We’re in every wall, ceiling, floor, in every piece of material you can think of, whether it’s underground, above ground, concrete, stone, gypsum, wood, tile, or granite. You name it, we’re working in it, so we have to be extremely versatile.”

“It’s no surprise, given his lineage, that problem-solving is Kris’s strength, as well as his favorite part of the career. He adamantly traces it back to his dad’s example. Kris’s favorite stories are those when Mark has solved a client’s electric dilemma in 45 minutes, after they were told by another electrician that drywall would have to be ripped out. Kris knows he’s been trained by the best and recognizes that, when he’s found himself in similar situations, the generational knowledge and experience is invaluable. “We’re not perfect, but at the end of the day, when we can solve problems that other people can’t, that’s flattering,” he shares. 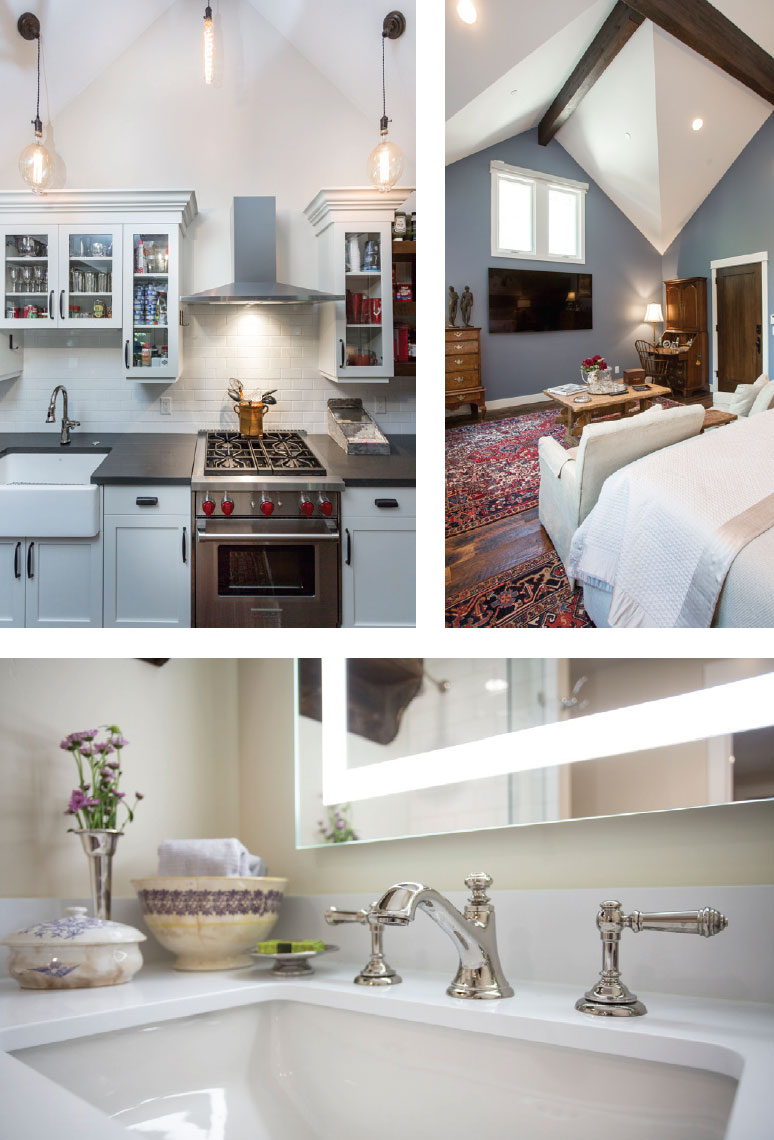 “One of the most satisfying things about being an electrician is that you do all this work installing boxes or recessed cans, pull wire from A to B, and then suddenly you’re powering everything up.”
-Kris Olsen, Olsen Electric

Six years ago, Mark went on a month-long vacation and came back to the addition of several more jobs and clients that Kris had lined up. It was in that month that the paradigm shift occurred between generations. Now, while Kris manages the crew and day-to-day operations, Mark works with a few remodel clients, and Kris’s wife, Lori, is the treasurer and chief bookkeeper.

In today’s realm of home automated lighting, Olsen Electric already has three decades of experience. In 1993, Mark obtained a dealership with Vantage, a luxury-controlled lighting system, and in 2003, Kris took over his programming, design, and installation. They shifted to Lutron in 2021, based on client demand, and in that first year, the dealership went Platinum. The rep told them he had never seen that happen. Olsen Electric also installs a substantial amount of Ketra, human-centric natural light systems. Ketra works seamlessly with Lutron’s high-end LED light, controls, and shades to create powerful, personalized smart spaces.

“One of the coolest jobs I’m working on right now is a private art studio incorporating Ketra lighting,” says Kris. “It’s a fun challenge that breaks up the plug and switch monotony, and involves more knowledge and technical skill. Installing and programming these lights that have the ability to not only change color temperature, but also work with circadian rhythm lighting brings an incredible sense of accomplishment. It’s just one example of why I really enjoy the electrical trade, along with the troubleshooting and problem-solving.” For Kris, the entire process is fun. After establishing an idea, putting it down on paper, and creating a budgeted plan with the client, installation and wiring begins. It may be two to six months later when they’ll come back to the jobsite, wire it all together, and program if applicable. Says Kris, “One of the most satisfying things about being an electrician is that you do all this work installing boxes or recessed cans, pull wire from A to B, and then suddenly you’re powering everything up. It’s a really cool experience to watch it all happen.”

One project that Kris remembers with particular pride – their largest to date at 22,000 square feet – was up in Deer Crest, one that began in 2008 and finished in 2014. “Dad and I basically designed 90% of the lighting in that entire house, except for fixture and shade locations,” says Kris. “It took almost six years to work on, but we were consecutively on it for well over three years. It involved a lot of detailed and specialty lighting. Even now it’s still on par with some of the more recent homes we’ve worked on as far as lighting goes.” 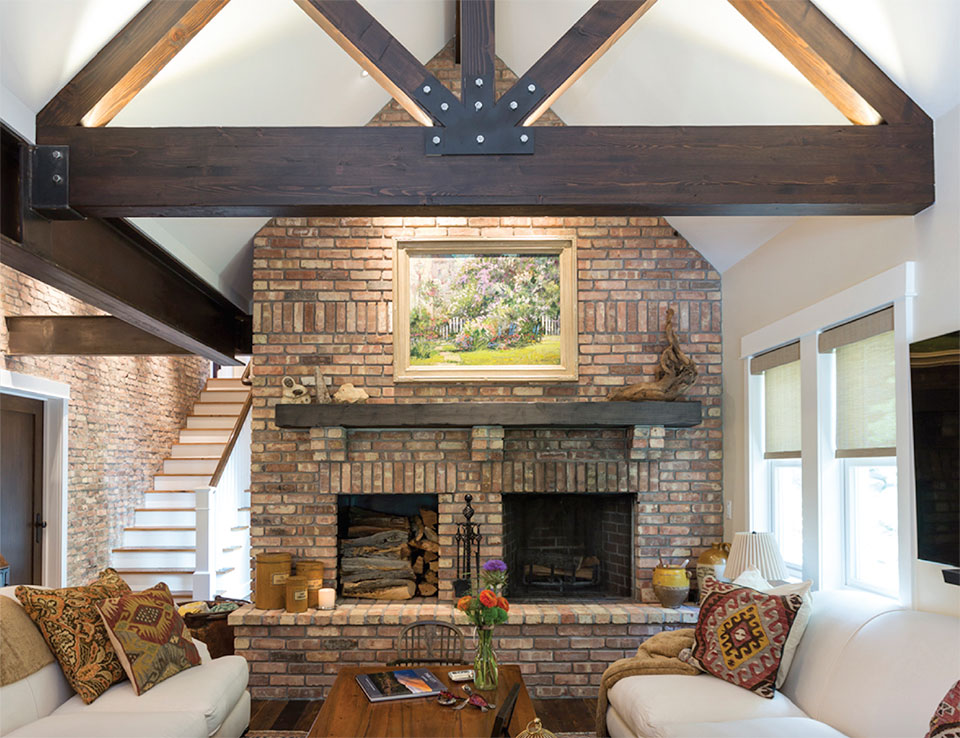 At 72, Mark is now taking more time off for play, but is still involved in the business. Suffice it to say, he’s handed off the baton and knows that Olsen Electric is in good hands for an even brighter, more colorful, more power(ful) future. But in the winter if it snows during the night, don’t expect to see him until noon, because, says Mark, “You don’t live in a ski town and pass up powder mornings. The job can wait.” Spoken like a die-hard ski bum.