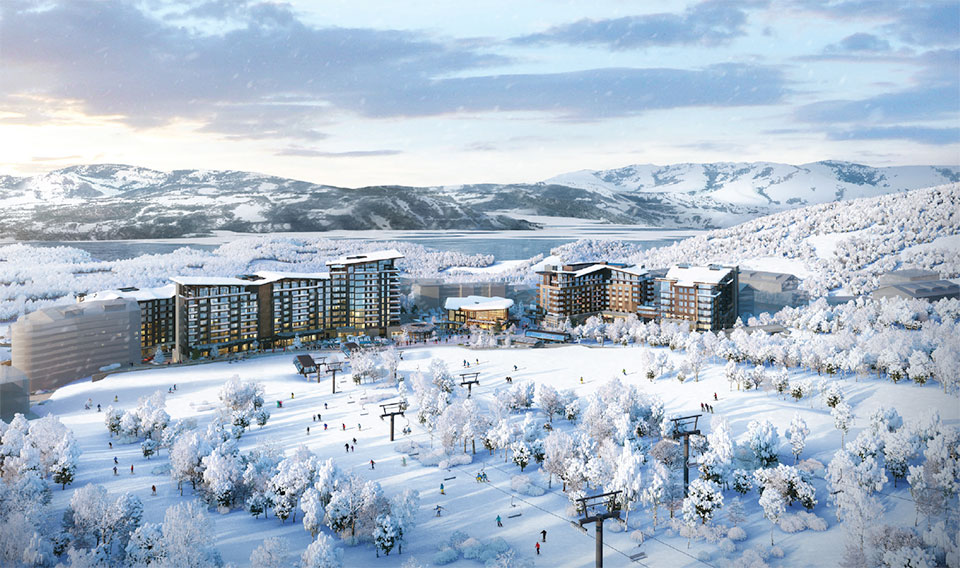 From Mining to Skiing 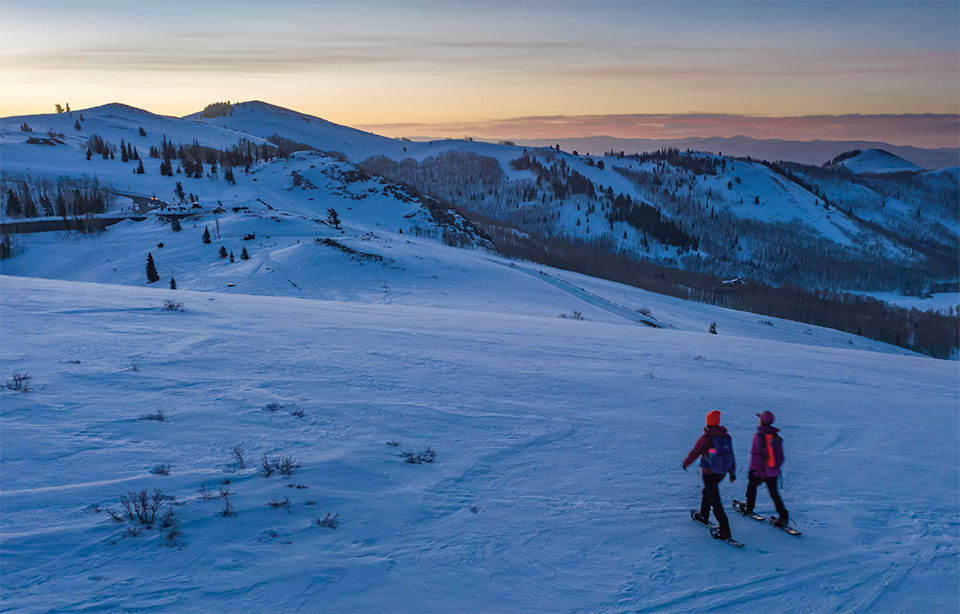 ark City and its surrounding environment are among Utah’s crown jewels, contributing to the state’s economy, recreational opportunities, and Olympic history. Many people, companies, and organizations have polished Park City’s facets and protected its valuable natural assets. It began with a booming and storied mining history in the late 1860s that eventually led to the centerpiece of the town’s culture—the opening of what is now Park City Resort in the early 1960s. Decades later, Park City’s legacy comprises award-winning art and architecture, year-round festivals, culinary excellence, glorious world-class resorts, and an ambitious 2030 climate goal. Its history reflects the local and visitor populations and their love for the authentic mountain lifestyle that is home to the Greatest Snow on Earth®, which has earned it countless accolades from its international audience. Two facets of Park City’s legendary status can be attributed to its location and access, which captivated former diamond trader Gary Barnett. As chairman and founder of Extell Development Company, one of the country’s most revered and influential residential, commercial, and hospitality developers, he clearly saw a future for adding a jewel to the crown. 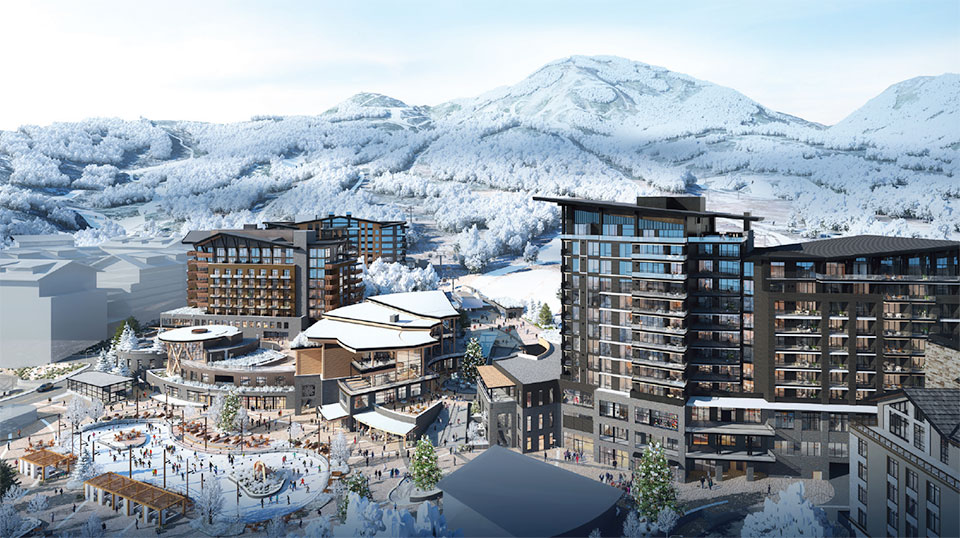 Barnett’s vision is to build the first new destination ski resort in North America in over 40 years, Mayflower Mountain Resort—an extraordinary, expansive, and expensive adventure. When he placed his bet on the mountains (an undeveloped site that had lain dormant since the late 1970s, which included the historical Blue Ledge Mining District, of which Mayflower is part), it meant tackling and investing in a to-do list that would shake other developers to their core, but not Barnett, whose success in New York City and beyond is a testament to his confidence and his comprehensive plan for the resort and village. The phrase, “It takes a village to raise a child,” could be rephrased as, “It will take a village to raise this village.” However, the state’s collaboration appealed to Barnett’s instincts, specifically Utah’s Military Installation Development Authority (MIDA), the acting body that promotes economic development and military initiatives. With MIDA’s power to issue bonds, authorize land use, and institute long-term infrastructure plans, Barnett’s belief and backing were soothed by substantial stakeholders with palpable enthusiasm for a sophisticated, state-of-the-art resort. “We felt that MIDA provided us with the comfort and certainty that we would be able to move forward after investing a large amount of money,” states Barnett. The president of the Utah Senate, Senator Stuart Adams, confirms, “We’re fortunate to have a great developer like Extell come to Utah. Seeing their expertise and what they bring to the project and the state is amazing. It’s an opportunity of a lifetime.” 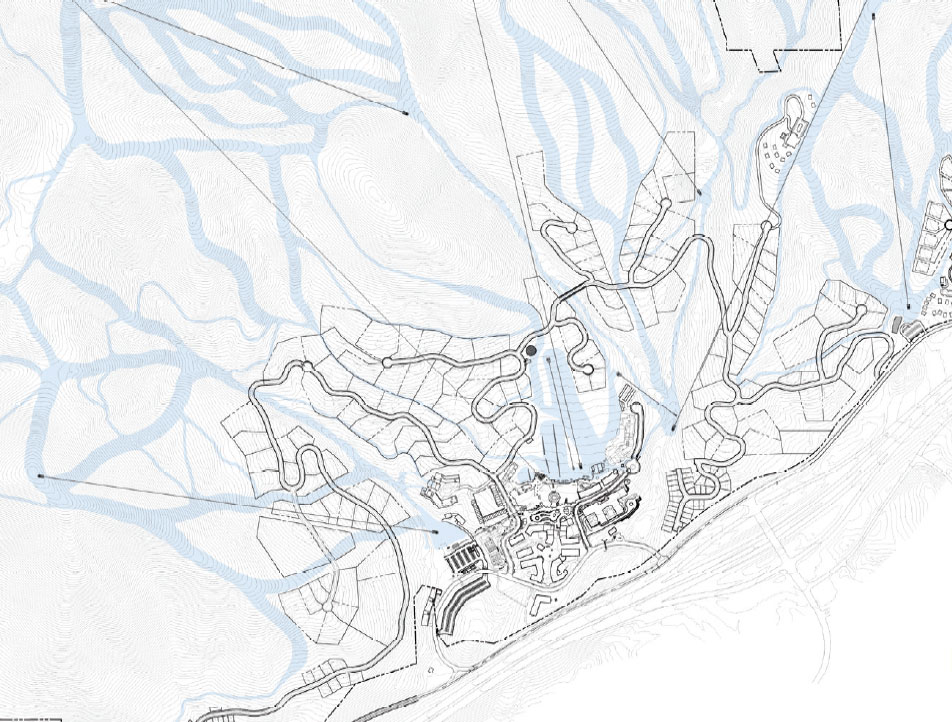 “We have great accessibility to a wide range of population, including the military, and of course, we have accessibility to a major international airport, and once you’re in a rental car, you can drive to the resort without hitting a stoplight. That’s pretty special.”
-Gary Barnett, Chairman & Founder, Extell Development Company

Since 2014, Barnett has unified over 6,000 acres of connecting parcels in Wasatch County, and Summit County, some of which touch the boundaries as well as under portions of the esteemed Deer Valley Resort. With or without an operations merger with its neighbor Deer Valley, once completed, Mayflower would be one of the largest new ski resorts in North America (since Deer Valley Resort: 1981/1982), taking first place over Steamboat, Aspen, Snowmass, and Snowbasin. 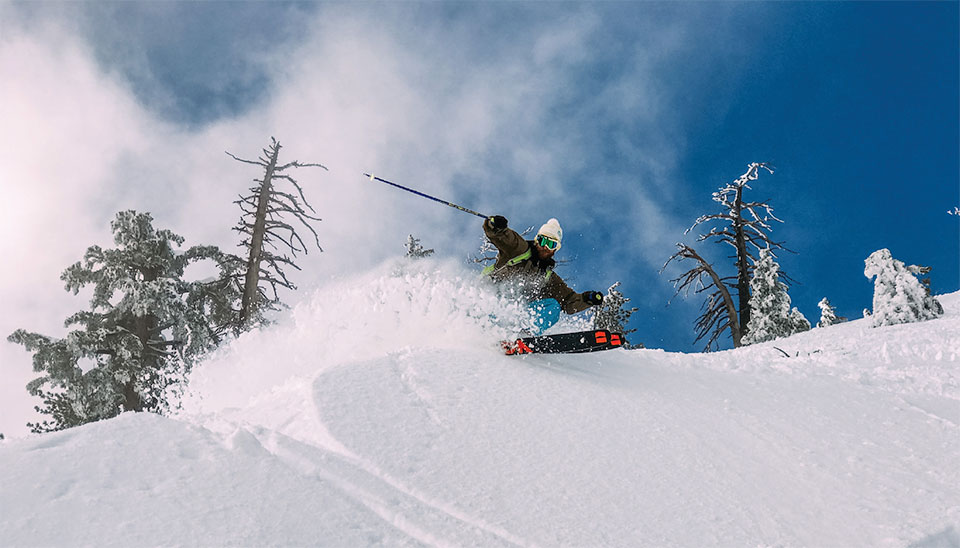 Well aware of the work required for the resort’s initial development phase, Barnett applied significant resources (over $20M) toward extensive mining remediation and environmental clean-up, known formally as the Voluntary Clean-Up Program managed by the State of Utah.

The Mayflower Mountain Resort is on Utah Highway 40, just 40 minutes from Salt Lake City International Airport, an optimal spot for local day skiers and an enticing and straightforward destination for those traveling from out of state. “We have great accessibility to a wide range of population, including the military, and of course, we have accessibility to a major international airport, and once you’re in a rental car, you can drive to the resort without hitting a stoplight. That’s pretty special,” says Barnett.

Overlooking the Jordanelle Reservoir, the “once in a century” project is an impressive resort and village with the numbers to reflect its presence as a predominant player in the ski industry: 4300 acres of skiable terrain that include groomers, glades, and chutes, 3400 feet of vertical, 12 ski lifts, and a two-stage gondola.

The conference hotel (also known as MWR Hotel) has 387 guestrooms, and 55 private condos and residences for sale. There will also be multiple dedicated conference space and ballrooms. Designed by OZ Architecture from Denver, a firm whose goal is “to create beautiful places that deliver lasting value for the communities they serve,” drew “heavily from the site’s mining history and the surrounding Wasatch landscape” for the hotel’s concept by marrying materials, mainly stone and metal, with massive expanses of glass to maximize the natural light and views. The land planning and landscape architecture were designed by Salt Lake City’s Langvardt Design Group, specifically by owner and planner Eric Langvardt and Craig Hahn, planner and landscape architect. The hotel’s builder is Jacobsen Construction, whose previous hotel and resort projects include The Sky Lodge Hotel in Park City, Ritz Carlton Club Bachelor Gulch in Vail, and Four Seasons Hotel and Resort and The Amangani, both in Jackson Hole. High-quality craftsmanship with attention to “behind-the-wall” refinement has made Jacobsen one of the West’s most sought-after luxury builders.

Barnett’s intention is for locals and visitors to create their own connection to Mayflower. Although “we’re building multiple beautiful hotels and while they’re attractive with very nice designs and finishes, they’re not meant to be wildly expensive. We will have a range of offerings. The MWR Hotel will be top-of-the-line, and I aim for everyone to feel at home regardless of where they’re from or their income.” He also adds that the residential condos above the hotel are available for sale. “Extell owned the Four Seasons Vail, and we saw 90% of the people who purchased putting their properties in the hotel pool. I think we’re seeing that the market appreciates getting in early to get something exceptional. It’s exciting to see the community respond.”

And there’s real anticipation for the largest ski beach on the continent, which is part of the master plan that envelopes nearly 580 acres of resort development with abundant snowmaking, plentiful parking, and an adjacent planned luxury community—Marcella.

Marcella at Mayflower Resort—”a recreation-rich selection of luxury ski-in/ski-out homesites” is sited on a hillside flanking Deer Valley Resort and will offer direct ski access through public and private trails from its 150 single-family estate lots. And for those who appreciate a menu of on-property amenities from which to choose, there is anticipated to be a community clubhouse, indoor-outdoor pool, yoga studio, theater, climbing walls, arcade, and a private boat for water sports on the Jordanelle. In addition, membership to the exclusive Mountain Club ensures members receive skier services, valet, dining, and a members lounge where they can gather before heading out to more terrain. Add in Main Street lounge access in Park City, where spa services and a private rooftop lounge await, and that’s a winning strategy for utilizing all that Marcela at Mayflower has to offer. For residents on the West Coast, door-to-door from Los Angeles, San Francisco, Seattle, or Phoenix is less than three hours. Nearly 40 lots have been sold as of the time of this printing.

Park City may be known as winter’s favorite town, but spring, summer, and fall compete to be favorites too. So, Extell built fifty miles of hiking and biking trails at Mayflower Resort, complementing Marcella’s access to fishing, horseback riding, and golfing, and expanding on an inviting and coveted all-season reason to explore and connect to nature and recreation with family and friends. 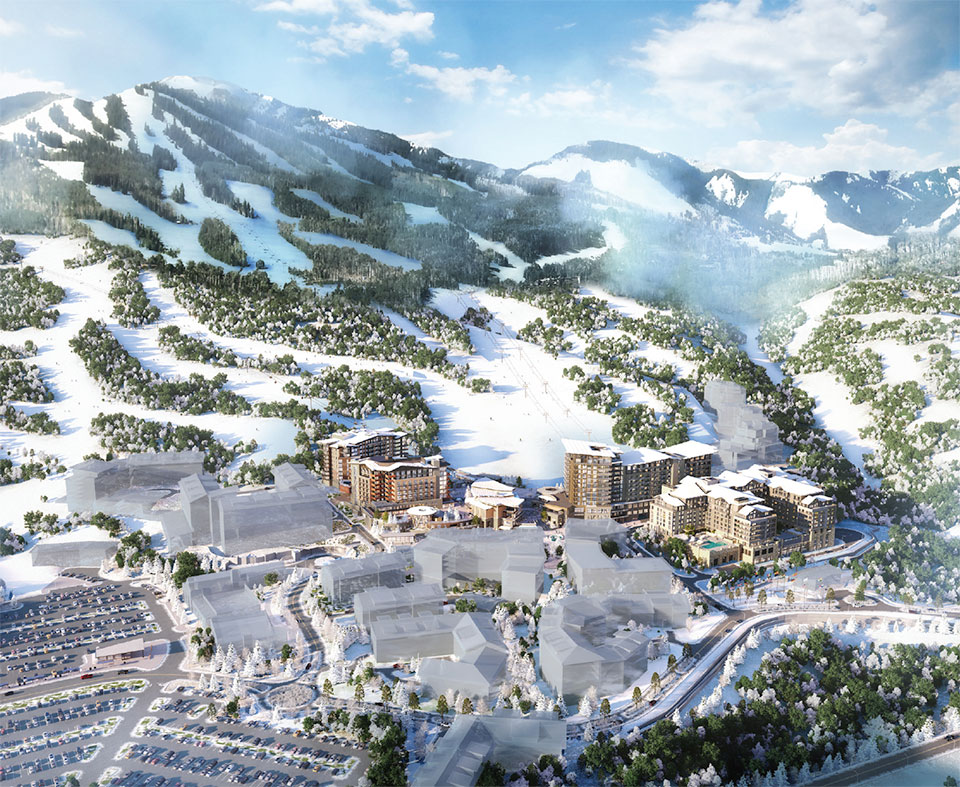 Developing a new alpine resort, there are numerous critical employees, consultants, and vendors, however a few leads and essential to Mayflower’s story is Kurt Krieg, Executive Vice President of Development at EX Utah Development, LLC (the Utah-based arm of the Extell Development Company), Brooke Hontz, Vice President of Development, and ski resort consultant Chris Cushing of SE Group. The trio of professionals brings decades of knowledge to the project’s major tasks. “We are lucky to have a diverse and talented team here focusing on the entitlements, planning, civil infrastructure, and vertical construction. But our team doesn’t end at Utah’s borders—we’re fortunate to have the legal, financial, and development expertise from the New York office,” claims Krieg, who joined Extell in 2017 with a unique perspective, having been VP of Sales and Operations for the Vail Valley Foundation in Colorado before his development tenure at East West Partners in Tahoe/Northstar California.

Brooke Hontz, an expert skier and a formidable ski resort community development leader beginning her career at Jack Johnson Company and serving a term as a Park City Planning Commissioner, notes that the Extell and Deer Valley updated lease agreement allows Mayflower to have direct access at the Sultan’s Nose area. “The link directly from the Ski Beach at Mayflower to some of the best skiing at Deer Valley is a perfect way to start your ski day.”

Cushing, who has a 25+ year history in global resort planning and is recognized as one of the world’s most respected ski area specialists who has received design awards for projects in Deer Valley and Steamboat, reaffirms that terrain is what it’s all about. “Mayflower brings a vast variety—open bowls, glade tree skiing, and fall line runs that are two miles long. This is a palette for terrain with incredible variety and great exposures.” Cushing will also contribute to resort programming with ski patrol, ski school, and rentals.

In 2019 Extell and Deer Valley executed a 199-year land lease amendment for the connection into the existing resort. Additionally, the parties are in discussions about the 4,300 acres of future ski land. Deer Valley is operated by Alterra Mountain Resort Company and Mayflower is “continuing to work closely with our neighbors—it’s a join and positive effort,” Krieg says. The large and complex resort village is planned in stages, and the earliest ski season looks to be 2024-2025.

“There are real estate opportunities right now, and we are good neighbors who are happy just to show you around. Being involved at the ground floor is absolutely amazing.”
-Sheila Hall, Summit Sotheby’s

Whether purchasing one of 55 private residences or a home site at Marcella, “There are real estate opportunities right now, and we are good neighbors that are happy just to show you around,” says Sheila Hall of Summit Sotheby’s. Hall states, “Being involved at the ground floor is absolutely amazing,” and encourages people to reach out and schedule a tour. She adds, “I am sure you could ask a few realtors who were in Park City when Edgar’s (Stern)* vision started coming to life for Deer Valley. Many people felt it was not a good idea or location—helping people to understand a vision is challenging. I am one who appreciates a challenge.”

Hall, a former air traffic controller and veteran of the US Air Force, is known for her attention to detail and ability to manage demanding negotiations. The quintessential Park City realtor with a strong following of repeat clients, she is well aware of new developments and trends and excited to highlight the lifestyle available to new Park City residents.

Another stage in consideration and exploration is that of the resort as an event site for the 2030 or 2034 Olympic Games. Barnett reiterates, “Everybody is going to want to ski this terrain and to experience Mayflower,” which could include world-class Olympic athletes chasing gold.

It’s evident there’s gold in them hills and Mayflower’s future.