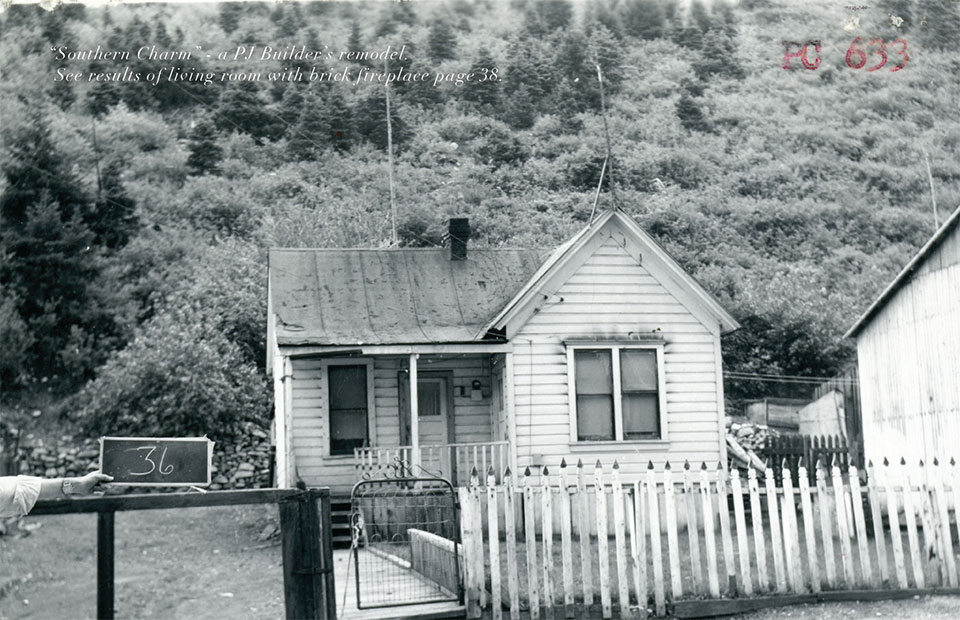 Park City’s Past, Present, and Future

“It looks like a men’s dress suit cost only $2.55 in 1937,” says Pete Olson, founder of PJ Builders. Pete knows this because he’s holding the newspaper that was being used as insulation in a historic house that PJ Builders is renovating in Old Town. If it sounds like a treasure hunt doing renovations in Old Town, that’s because it is. In addition to old newspapers used as insulation, PJ Builders has also unearthed a case of live dynamite (they immediately stopped digging and called the bomb squad) and found one of the last clay marbles, used before marbles were made out of glass around the time of the Civil War.

Founded by longtime local Pete Olson in 1997, PJ Builders is an award-winning homebuilder that initially established its reputation for managing complex, exquisite, and custom historic home renovations in Park City’s Historic Old Town neighborhood. They also have extensive experience in the complex, specialty task of craning and lifting houses. Having worked in both the historic and non-historic districts, PJ Builders has a broader-than-usual knowledge of Park City area building guidelines and has established good relations with planning authorities, local architects, building department staff, and inspectors. Over the years, the company’s expertise has grown to include the construction of custom homes and extensive home remodels. Their experience working in the tightly regulated environment of Old Town also makes building large custom homes less challenging. 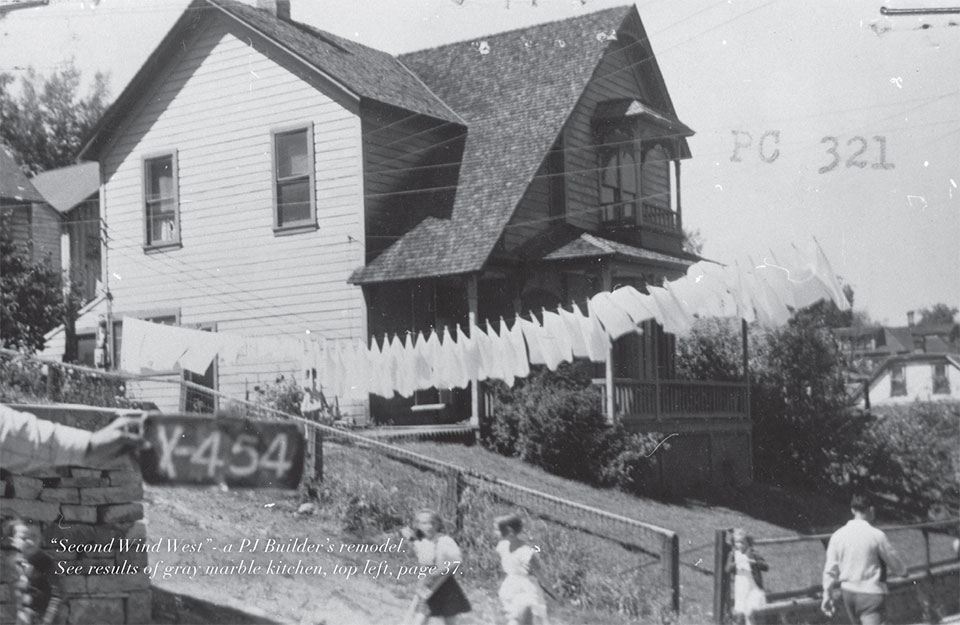 PJ Builders is the go-to builder for Old Town renovations. Building in Old Town means being accustomed to the constant logistical challenges of working in Park City’s historic district. Most important is to make sure that any new construction is architecturally compatible with the historic structure, often presenting unique challenges. Height limits and footprints, historic preservation of old structures, such as keeping a certain percentage of the original facade or working with small four-foot-tall doors, heavy snowfall, and staying on deadline even when the Sundance Film Festival brings over 100,000 visitors into town are par for the course when working in Old Town. 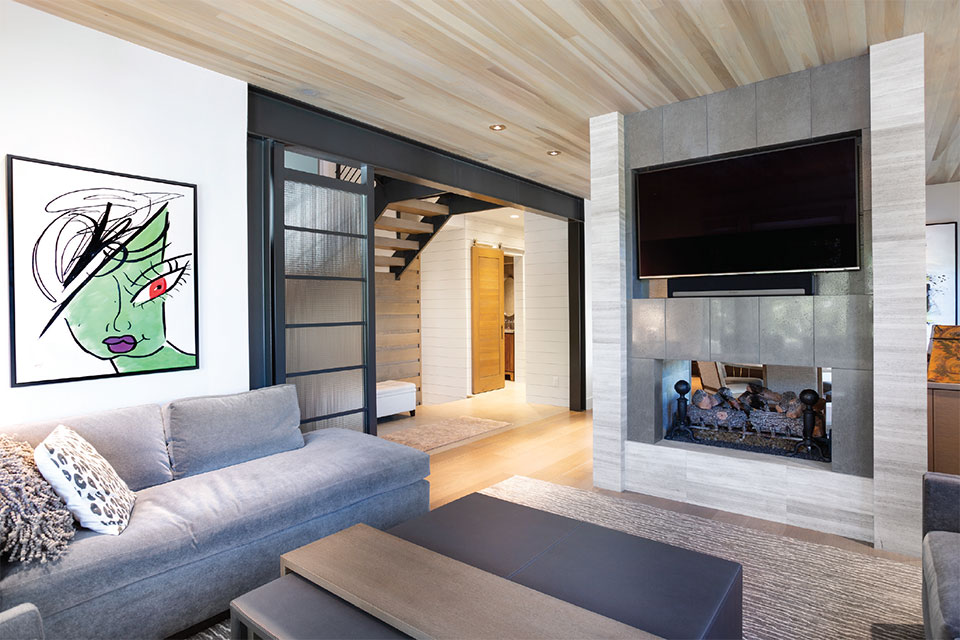 PJ Builders has excellent communication between architects, structural engineers, soil and geo/tech engineers, and the city’s planning commission, building, and engineering departments. The planning department and process for Old Town renovations is far more involved than in new builds. Many activities in Old Town require a permit to close the road down for any work that will take over 30 minutes, from pouring concrete to crane work and deliveries. Those extra steps do not usually exist in new builds, which makes custom homes a breeze for PJ Builders.

In addition to logistical challenges of navigating roads built in the mining era and small lots with modern equipment, there are also historical considerations and procedures that come with working in Old Town. These additional steps include labeling all stone, securing structures, spacing for equipment, engineering, working closely with architects, and being compliant with zoning laws while preserving historic integrity.

Refurbishing 100-year-old wood from the houses and keeping some of the original structure per the city requirements can be costly. It requires a lot of proactive planning, attention to detail, and problem-solving. It’s a hard place to work because space is tight and you’re dealing with historic structures, but PJ Builders has a great team that works well together.

“I’m lucky,” says Pete. “We’ve been in business a long time and have been able to assemble a great team with a lot of collective intelligence to do the best work. We work holistically, which means that everyone looks out for each other to ensure a high-quality end product.”

Currently, PJ Builders has a 100-year-old home raised up on beams and will move the entire house back 16 feet from the road to allow for a city right of way easement. “Essentially, we put this little old lady of a house on roller skates and we will slide her back,” says Pete, who draws an analogy to a Jenga game with the house jacked up on two steel beams while it is lifted.

The most challenging part of the project is that the historic house has an addition on the side that was built in the ‘90s. That addition is two feet higher than the original house, so PJ Builders had to “surgically remove” the historic house from the one next to it to make the 16-foot move. The process involves raising the house, pouring a new foundation, and setting it down in its new spot that will give it 100 more years of life. Pete says he and his team will all let out a big sigh of relief when the houses are finally set down in their new spots.

Arriving in 1992, Pete quickly came to love the Park City area and his new outdoor Mecca. “Preserving historic Old Town houses is vital to understanding our town’s heritage,” says Pete. “It is a huge accomplishment to keep the fabric of historic Old Town intact as much as possible.”

Pete’s passion for what Park City offers in terms of outdoor recreation directly relates to his enthusiasm for renovating Old Town. He lived in a lot of the Old Town miner shack houses throughout his formative years there. “It was a good lifestyle,” he reminisces. “It’s part of what drew me to renovating and rebuilding Old Town. Park City Mountain Resort’s Town Lift brings the resort life right into Old Town. It gets a lot of snow there, and then at the end of the day you can walk to restaurants and bars right down Main Street.”

“It’s rewarding to take something with historic value and give it an update on the inside.”
–Pete Olson, Founder, PJ Builders 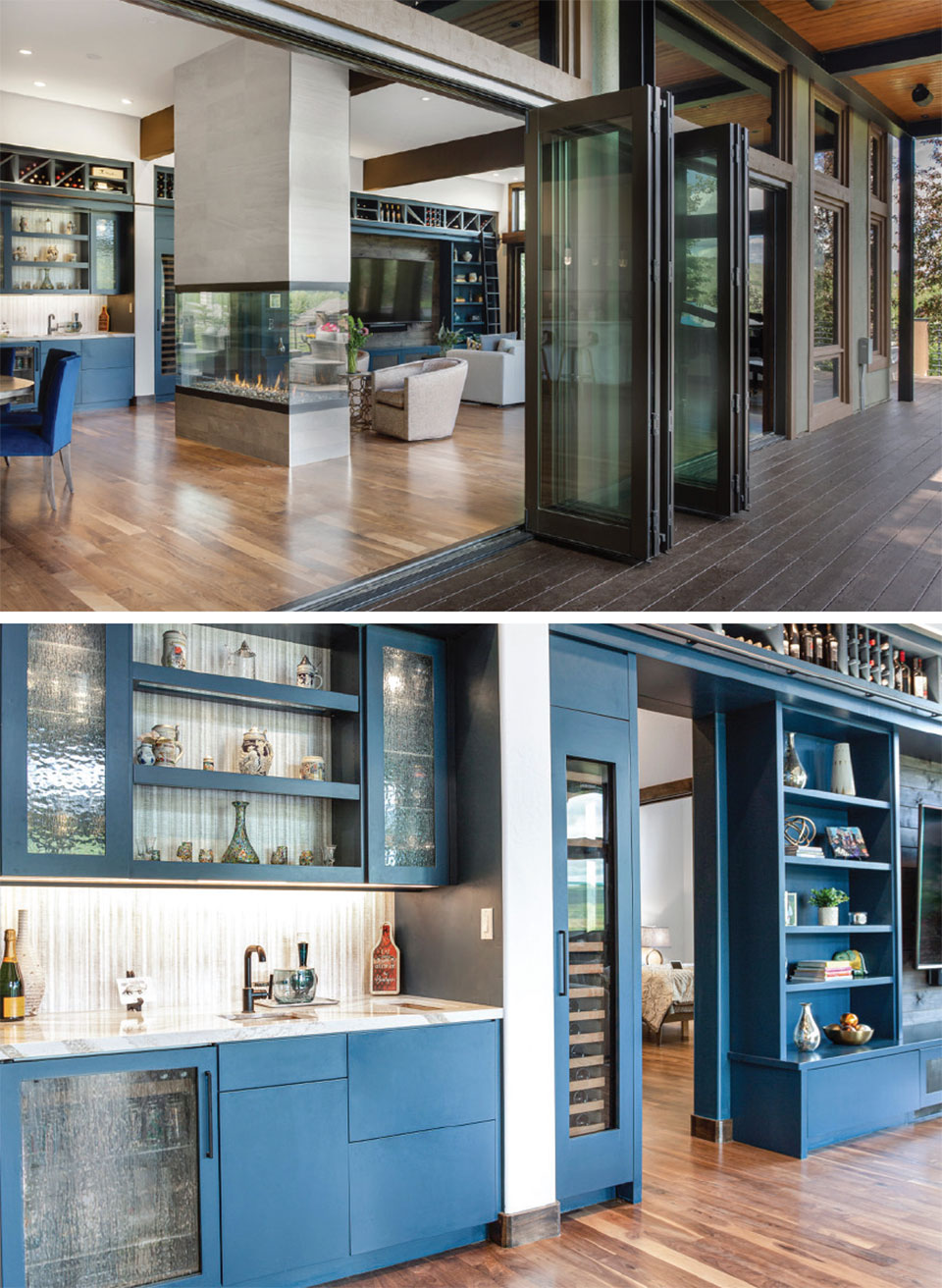 Another Old Town project PJ Builders has completed is Second Wind West, a historic home that was lifted and moved down the street. It was right on the ski trail, so it was put on a truck and moved before PJ Builders began their work on it.

“For our work, we put the houses up on planks safely and then are able to put all new systems in including electrical, plumbing, and fire suppression. We give them new foundations, add radiant heat, and insulation, as well as make them work for modern life. It’s rewarding to take something with historic value and give it an update on the inside.”

Park City is an outdoor paradise. Park City Ski Resort is considered the largest ski area in the U.S., with over 7,300 skiable acres and a summit elevation of 10,026 feet. The town’s 500 stretching miles of trails were the first-ever ranked as a Gold Level Ride Center by the International Mountain Biking Association. The IMBA award is only shared with five other destinations around the world. Park City’s proximity to Salt Lake City allows for adventures in the mountains with the accessibility of a major airport.

“There is nothing else like this property in the resort area,” says Sheila Hall, Associate Broker at Summit Sotheby’s International Realty and 2019 President of the Park City Board of Realtors. Most properties in the core resort area are hotels built for high-density habitation. The Ridge allows the space to be comfortable and feel at home with large living areas and spacious bedrooms, as well as the convenience and fun of being in the middle of it all.

Originally settled as a silver mining town, Park City has become a worldwide recognized address with the Sundance Film Festival and what many refer to as the best snow on earth. The culture and diversity embedded in the town from the film world has infused a thriving community with a sense of stewardship and forward thinking. It’s not just the bike trails that are world-class, so are the schools on the eastern slopes of the Wasatch Mountains. The Ridge is the perfect luxury townhome development to make Park City home. 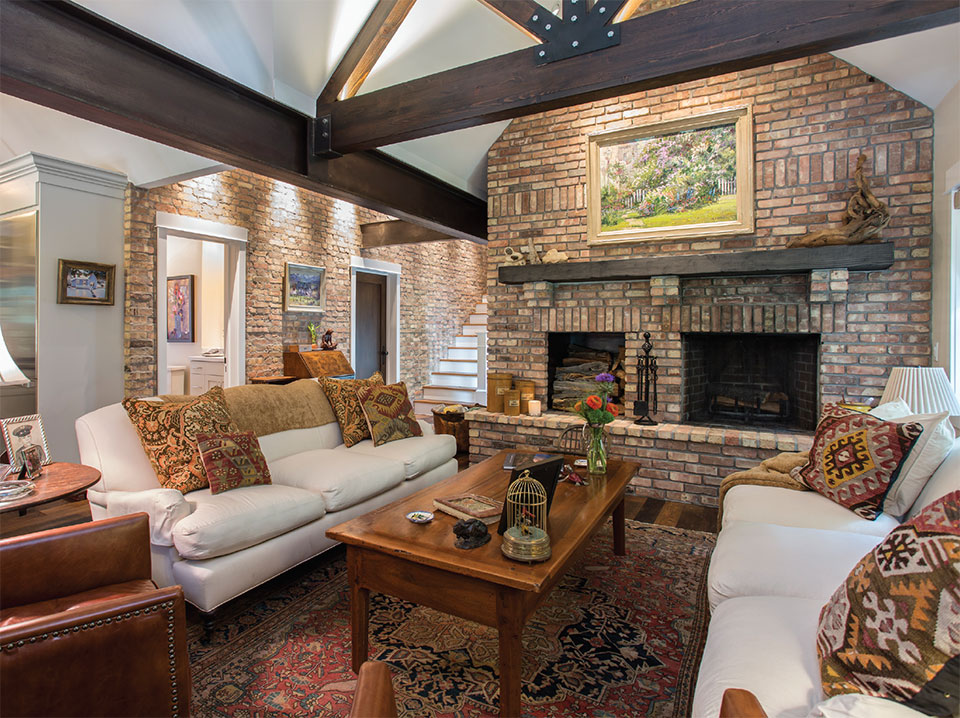 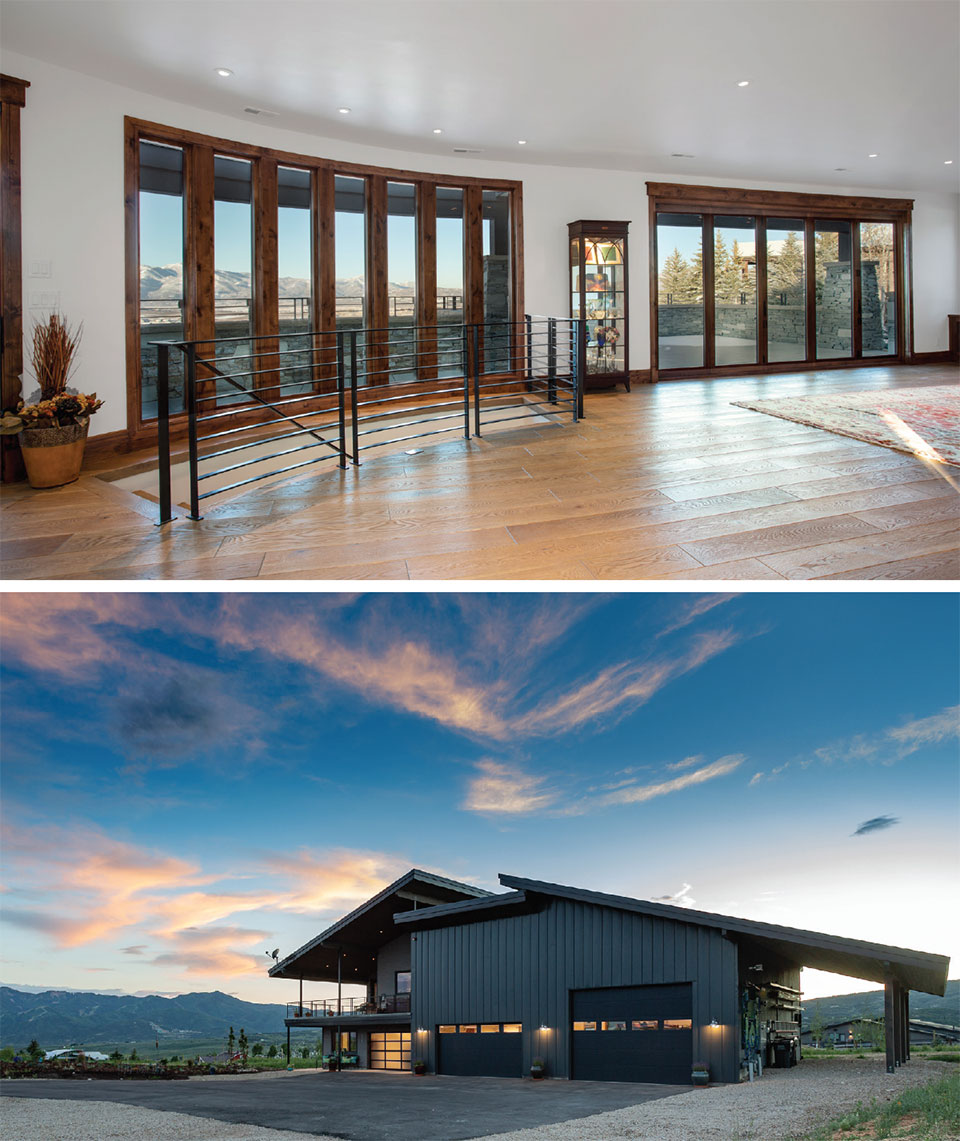 Proactive planning is critical to success in Old Town. Putting those processes in place has helped PJ Builders with its custom new builds that are located outside of the historic district. When they start from scratch, they don’t run into some of the issues seen in 100-year-old homes. Having decades of experience means new projects run seamlessly for PJ Builders. With new builds, PJ Builders is not opening up the walls or encountering structural challenges. Old Town houses have often been piecemealed together, which means that all kinds of structural surprises can arise that are not revealed until the walls are opened up. While most Old Town homes are not structurally sound, working outside of the historic district means PJ Builders can focus on its building process free and clear from the obstacles it routinely encounters in older houses.

“It’s rewarding to not only give old homes 100+ new years of life, but also to bring people’s dreams to fruition. We take pride in our work and want our clients to know how much love and effort we put into building a custom house for them.”
–Pete Olson, Founder, PJ Builders

Pete has spent over 25 years increasing his knowledge and developing a sharp eye for details. PJ Builders is highly regarded in the building community because Pete keeps his team’s technical expertise honed for every project. The team meets the highest standards in some of the most technically challenging projects and applies that knowledge to new custom builds.

Custom built-in organization is one example of how PJ Builders addresses its clients’ lifestyles. A family that loves to ski needs a nice mudroom with individual built-in lockers, so Mom isn’t aggravated about everyone’s gear all over the garage. For movie buffs, PJ Builders loves building a great movie room so they can screen films and celebrate Sundance at home. Die-hard chefs need everything just right where they want it in their kitchens.

“I love getting in deep with my clients to know how they live so we can enhance their lives,” explains Pete. “It’s rewarding to not only give old homes 100+ new years of life, but also to bring people’s dreams to fruition. We take pride in our work and want our clients to know how much love and effort we put into building a custom house for them.”

Congratulations to Pete and his crew for being awarded Best General Contractor & Best Carpenter by Park City’s Best 2020. 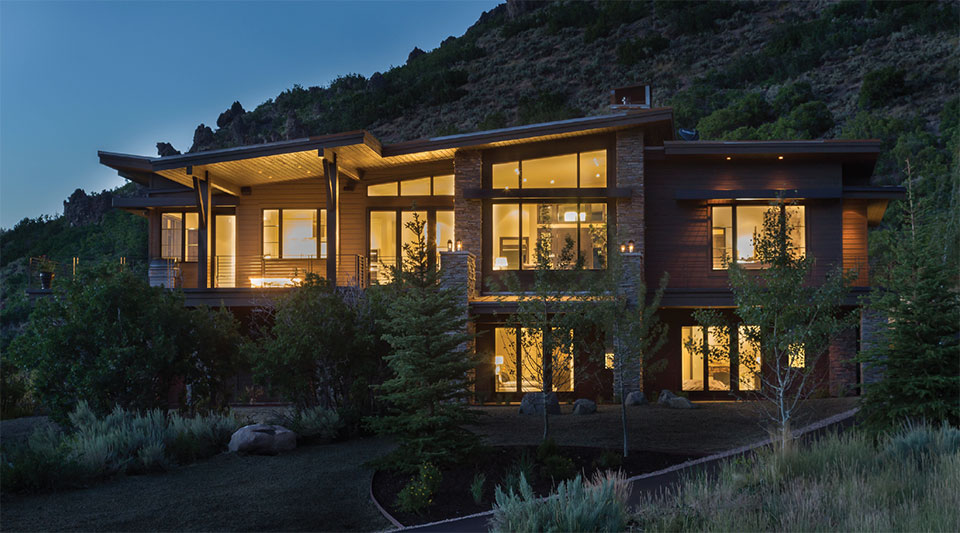