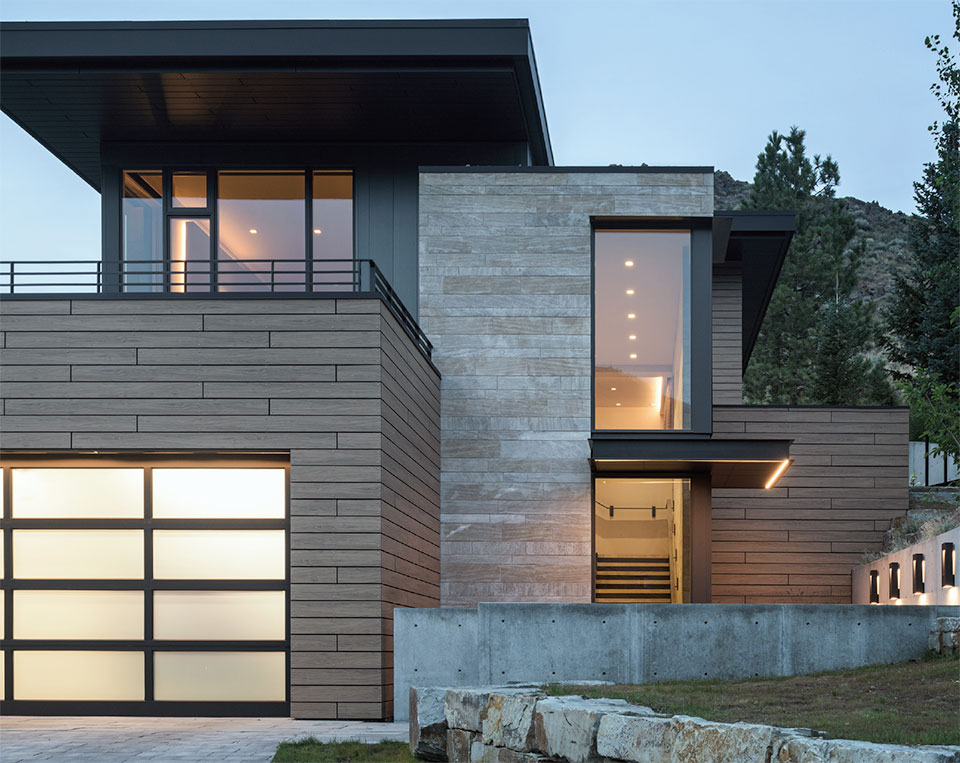 Up for the Challenge: Turning a complicated project into reality 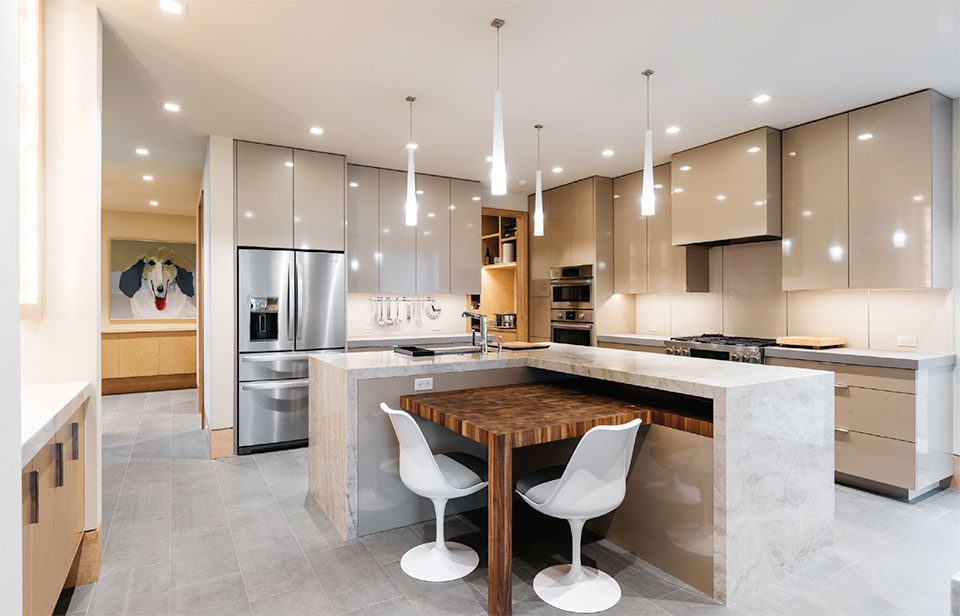 hen these homeowners set out to build their fifth and final home as a couple, they were significantly downsizing from the 9,500-square-foot house they had built in Sun Valley 25 years earlier. The new home would be ultra-modern, provide stunning views of Bald Mountain, have plenty of outdoor living spaces, and be able to handle the infirmities of advancing age.

In response, architects Peter and Kristin Anderson, AIA, of Anderson Architecture, P.A.,designed a complicated yet exciting three-story, 5,500-square-foot home in Ketchum with plenty of open space flowing seamlessly from indoors to out. And Bashista Construction Corporation was up for the challenge. 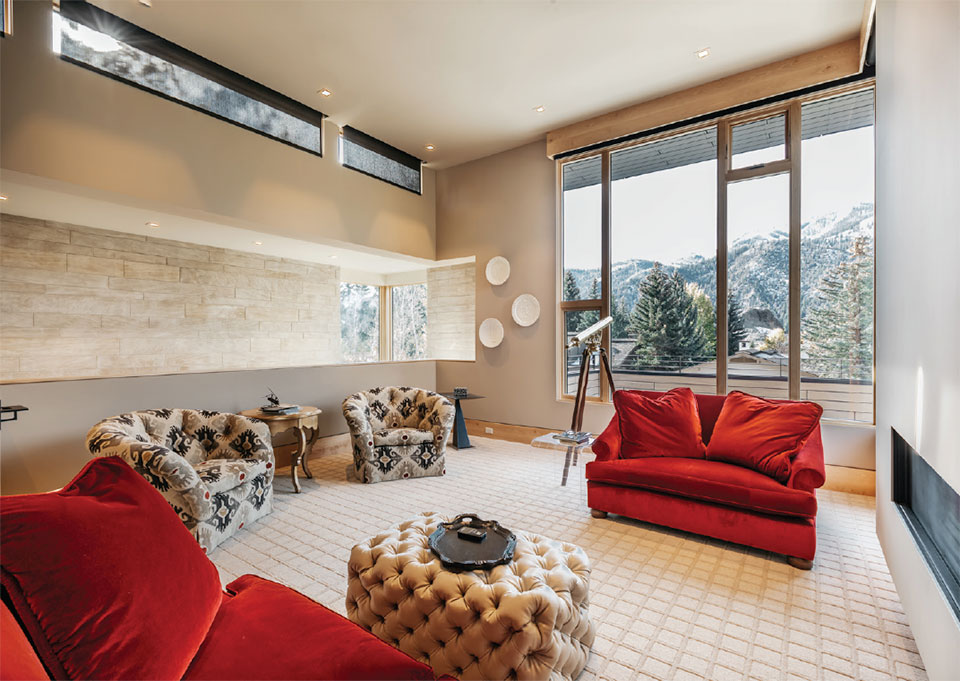 AN ULTRA-MODERN HOME ON AN UNUSUAL LOT

There were more than a few obstacles, and Bashistawas tasked with solving them. Managing principals Shane Lago and Josh Glick are known for their ability to take challenging projects and turn them into reality. In this case, the lot was steep and only 50 feet wide. In addition, it was subject to multiple zoning ordinances for rooflines and setbacks, and an existing structure on the lot was considered historical.

“The architects brought us in to work with the homeownersat an early stage,” Shane says. Josh adds, “Coming in early is ideal because it gives us time to have many conversations with subcontractors, the city, and the architect. So, a lot of things that had to get figured out were allotted the time necessary to achieve the desired result.”

It took a full year of working with the City of Ketchum’s zoning department to obtain the building permit, but, collaboratively, Shane and Josh found solutions.

City code required Bashista to use some of the original foundation to maximize the use of the lot. However, the original home was built in the 1950s, and the concrete used no longer meets today’s standards. Ultimately, the team was able to work with city officials to find a solution preserving the original layout and setback and starting fresh. 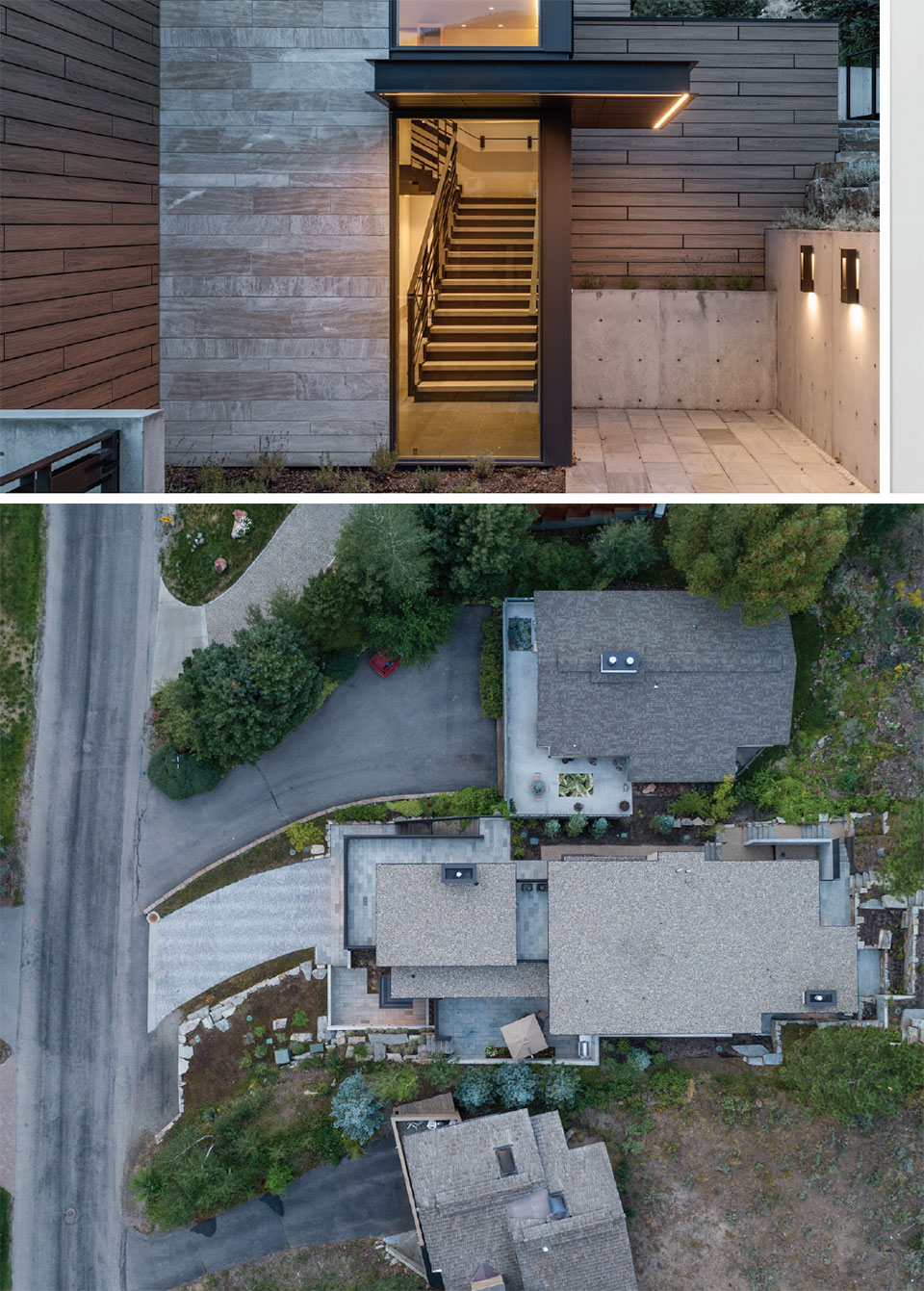 “As tight as the lot is, the main interior areas flow well with the outside living spaces. And those turned out great, too, especially toward the upper back of the house.”
-Shane Lago, Managing Principal, Bashista Construction Corporation

“Because the lot was so narrow, we didn’t have the same access you might see on a normal site, so we built the house in thirds,” Shane says. First, they poured concrete and framed the back two-thirds, finishing it to the point where they no longer needed heavy equipment. They then landscaped the back before beginning the streetside front third of the house. “We wouldn’t have been able to get any of the trees or rocks behind the house that are essential landscape materials to this home if we’d done it differently,” Josh says. 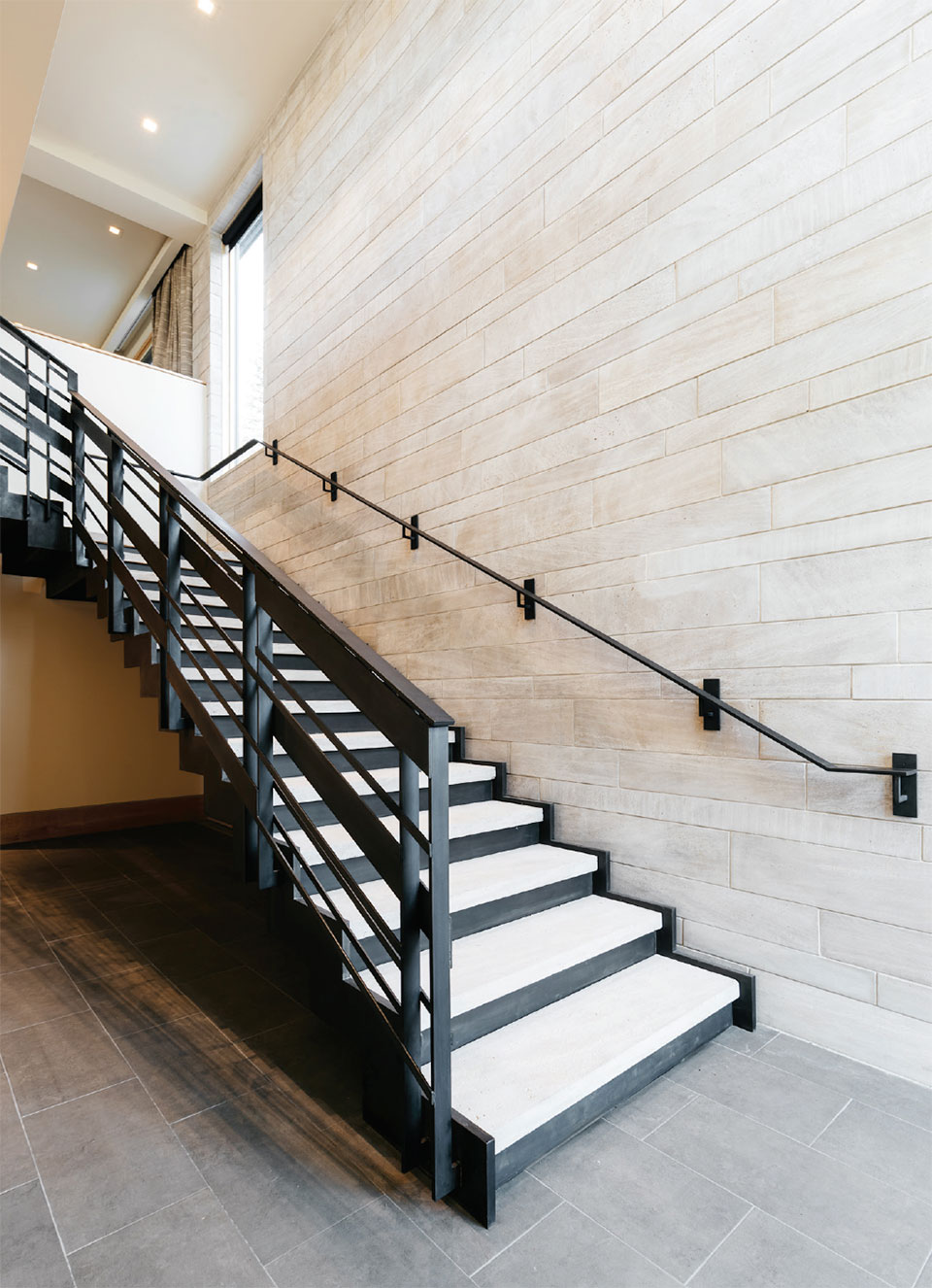 This construction plan required proactive coordination and carefully managed schedules to ensure that the subs were ready at the right time. “There was a lot of overlap,” Shane says. “Subs would leave the site for months and then return to do another phase. That was the most difficult thing, to juggle schedules and keep all the pieces in play.” He credits Josh’s longstanding relationships and constant communication with the subs for keeping the project on schedule.

As if managing the schedules wasn’t complex enough, COVID-19 hit while the house was under construction. The City of Ketchum imposed labor restrictions so that only ten people could work in a home at once. To uphold safe work practices, Bashista staggered their subs. Josh recalls, “At one time, we only had painters, then we mixed in electricians, then flooring. When COVID hit, we were in the finish stages and still had about a quarter of it left.” 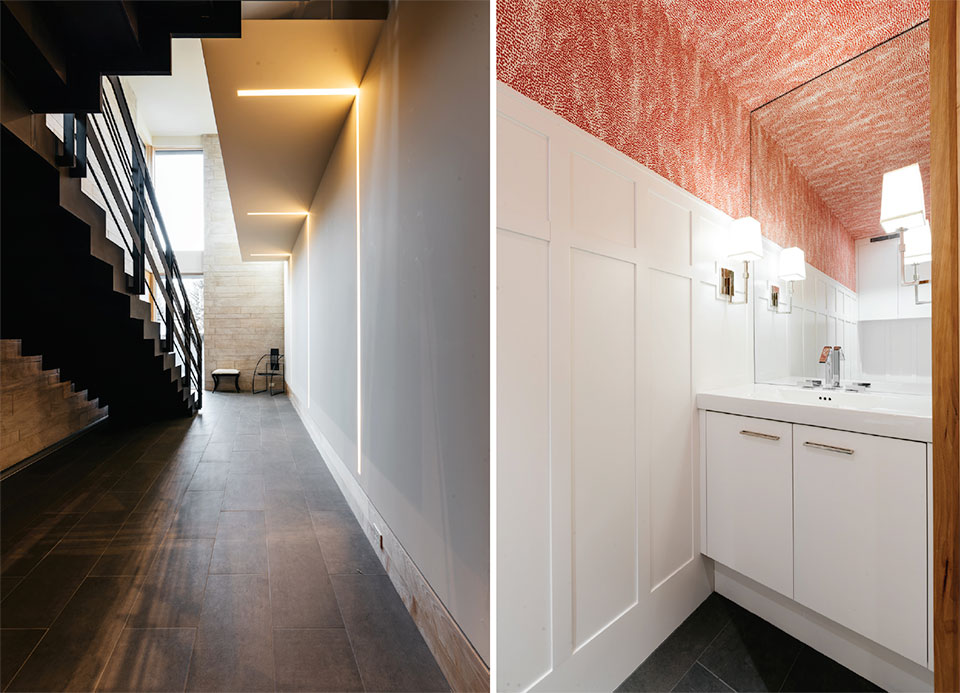 Although they worked with an interior designer on carpets and fabrics, the homeowners were handson and led the design. High-end drywall finishes and flush design baseboards make for smooth, flat, clean lines. In addition, Bashista partnered with Ketchum Kustom, a local cabinet contractor, to build kitchen cabinetry specific to the size of the client’s family dishes and heirlooms. They even lined drawers with velvet to display showpieces and to keep them safe.

Although the kitchen color palette is warm andneutral, the clients incorporated lavish red lacquer cabinets in the laundry room and a red accented powder room for an unexpected design detail. In addition, a one-of-a-kind floating steel staircase with stone treads is supported by two hidden attachments, giving the effect of expansiveness and adding to the home’s clean lines. 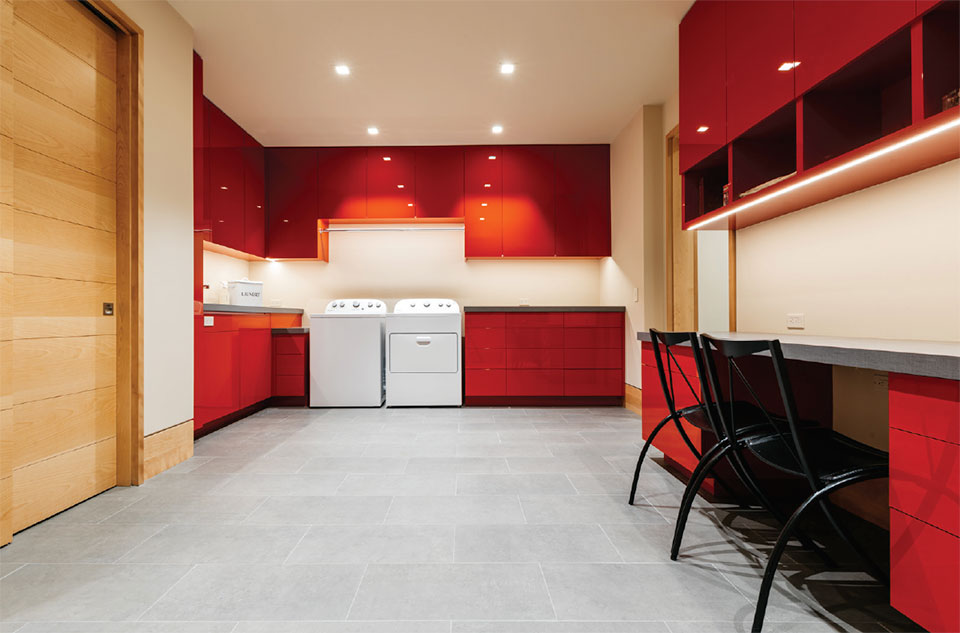 “Every project is different, and it’s a blank canvas for what we can do.”
-Josh Glick, Managing Principal, Bashista Construction Corporation

The home is LEED silver certified due to details like insulation, window glazing, air quality performance, and lighting–all meeting green building standards. The water heater, furnaces, and appliances are of superior quality, contributing to the silver certification. In addition to being sustainable on paper, the house feels like it was meant to exist on the site.

“The primary bedroom and living room look right at Baldy,” Josh says. “It has some of the best views in the city.” Shane agrees. “As tight as the lot is, the main interior areas flow well with the outside living spaces. And those turned out great, too, especially toward the upper back of the house.” 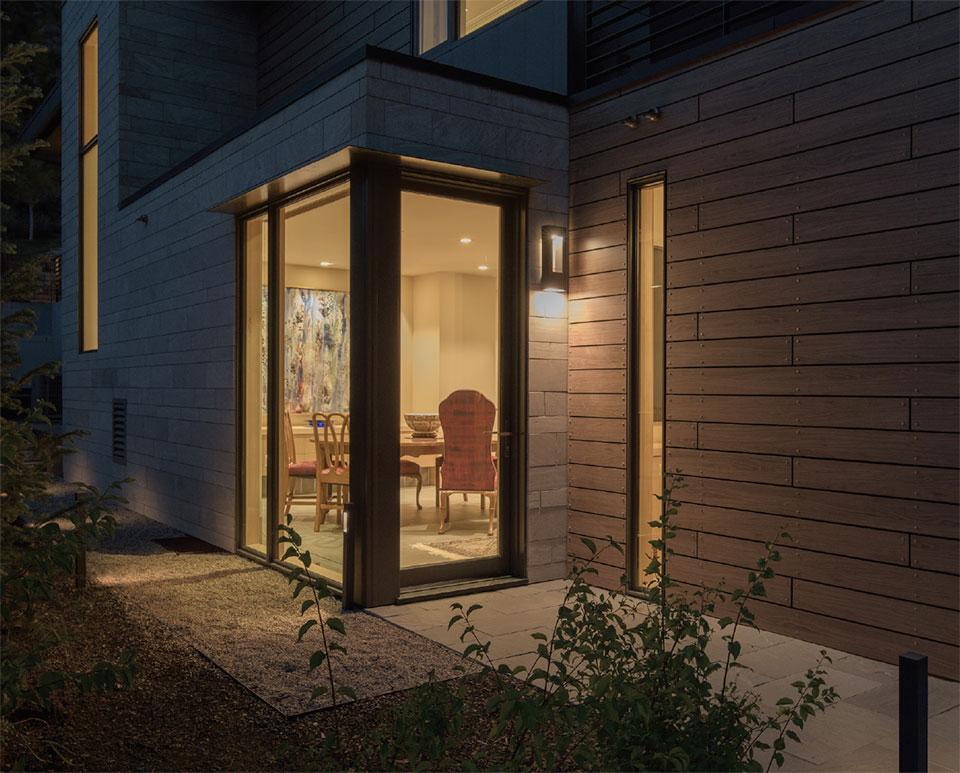 The result is spectacular. The owners are incredibly pleased with the quietness both inside and out due to the substantial construction materials. To combat bright light, the owners worked closely with an architect and energy consultant who recommended heavy-gauge glass. This specific glass filters the light of the setting sun into the south and west windows in the summer, resulting in reduced solar gain. “It feels more solid than a British castle,” say the owners.

As challenging as this project was, the challenge is what Josh and Shane love about their work. “Every project is different, and it’s a blank canvas for what we can do,” Josh says. Shane adds, “It’s really rewarding when an architect draws something exciting, and then we get to show them how to make it happen. We won’t say we can’t do it. Instead, our response is, ‘Let’s find a way.’”