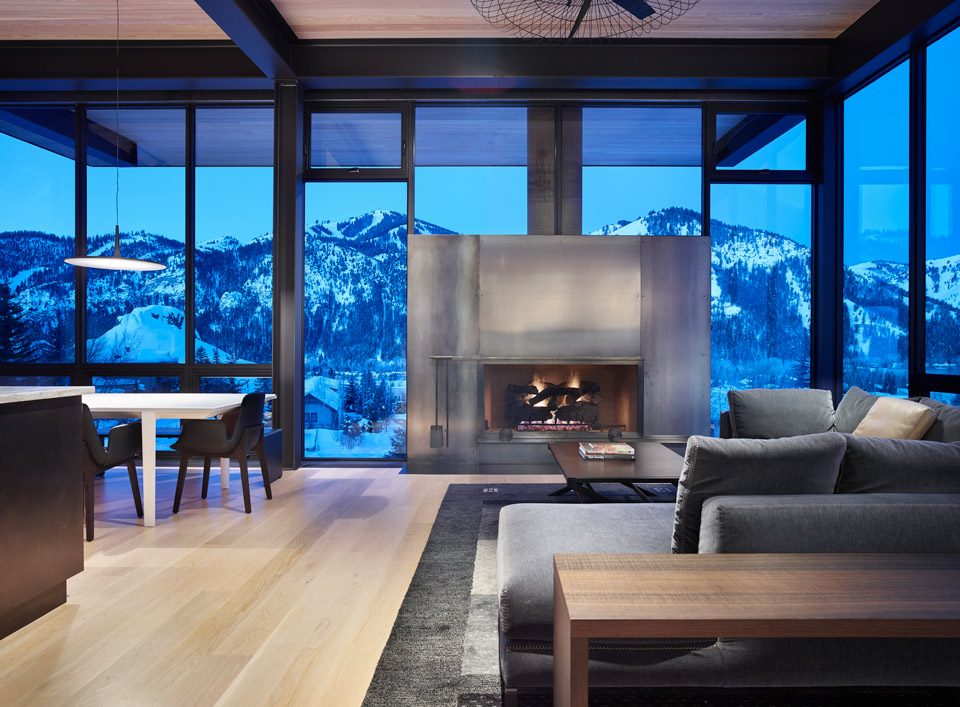 Knob Hill, one of Ketchum’s original neighborhoods, is steeped in history. Named for the distinctive rock outcropping that rises a few blocks from the town core, today the neighborhood is an enchanting blend of old and new, and home to an eclectic architectural mix, from Bavarian-inspired chalets to mountain modern spectaculars. With some of the best views in the Valley, an unbeatable in-town location, and a special place in local lore, it’s easy to see why its popularity has stood the test of time. Knob Hill endures, its undulating, sloping streets lined with new takes on residential vernaculars.

Perhaps it’s this combination of in-town proximity and unparalleled vistas in view from nearly every direction that are inspiring a new generation of homeowners to make the most of the location’s natural beauty but to do so respectfully, in keeping with—or perhaps in deference to—the neighborhood’s heritage. 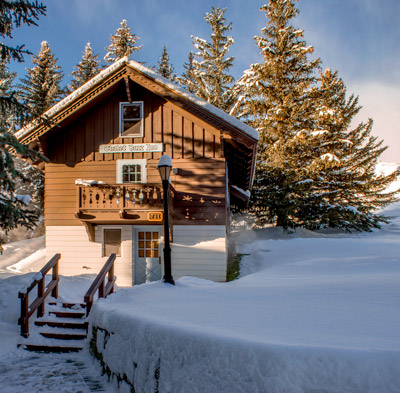 Knob Hill’s history has profoundly shaped what is today, and was largely driven by Idaho native “Buzz” Bradshaw. Buzz and his wife Myrtle fell in love with the area in the fifties when they came to visit friends. In 1954, they bought a lot and built a chalet-style home that included specially milled interior pine paneling that today would cost more than the entire house. This marked the beginning of a decades-long family project of acquisitions and building in the neighborhood.

The Bradshaw family would go on to purchase lots from local resident Paulitta DeSutter, who would agree to cash sales of 10-foot by 10-foot strips of land when she needed to re-stock her liquor cabinet! In the 1960s, the Bradshaws bought three lots on the east side of East Avenue in the hopes of protecting the area from what they saw as “outside” investment. When that vision was threatened, the Bradshaws joined forces with neighbors and donated money to a then cash-strapped city of Ketchum to acquire more lots and create Knob Hill City Park, which still exists today.

Buzz’s legacy is most evident on Alpine Lane, which may also best encapsulate Knob Hill’s past—and its future. This quiet, one-way road is home to two very special new homes that represent the best of modern architecture and building techniques while paying homage to what’s come before. Most striking in these two very different structures is how both owners sought to create quality-laden but toned-down residences, nothing grand or imposing. In addition, both wanted their homes to be in harmony with the environment. It’s as if all involved—architects, builders, and owners—recognized the neighborhood as the true star of this show and created homes around the storied locale.

In Harmony with the Environment 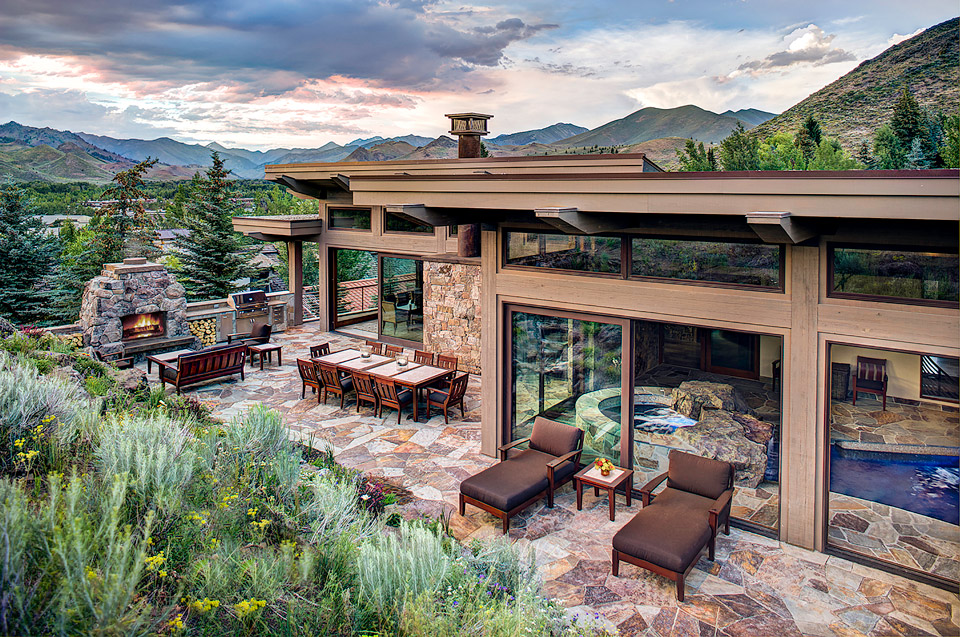 On the northwest end of Alpine Lane, a sprawling main house represents a family narrative that has evolved over time. The family collection now includes five different lots that accommodate a main house, part of the preserved community park, and a guest residence. The primary home sits on two original Bradshaw lots and is the result of a complete overhaul by local architect Jim Ruscitto of Ruscitto Latham Blanton and Ketchum-based builder Wilson Construction. Next door to the main house, the family chose to include a sprawling park-like space, complete with an original Challenger lift chair, which swivels to take advantage of the views, and a putting course where the owner can conveniently tee off across the street and over to the guest property. (Shh, no telling.)

Yes, whimsy and imagination abound here. Instead of one big mass, the home is designed as a series of wings, stepped in a series of natural terraces, creating a sprawling effect without ever feeling large. The two major wings are separated by a center section that serves both aesthetic and practical functions. In addition to trying to keep a rather generous footprint low key in terms of scale, Ruscitto worked specifically to avoid a “looming design,” and to ensure the structure blends into the surrounding environment. Natural exterior stone and stucco juxtaposes an interior featuring marble floors, contrasting textures, and timbers. As Ruscitto says, the various materials and interior design elements included in the mix make it “hard to pin down a style.”

Expansive glass doors open to an indoor swimming pool, connecting the inside with the outside with just the right amount of drama—a whisper rather than a shout. Built in a kidney shape, it’s clearly swimming hole-inspired: water cascades into the boulder-lined pool, offering yet another nod to the ruggedness of the landscape that beckons just outside the walls. It manages to be both intimate and imposing, and exceedingly inviting. Just beyond is a patio ideally positioned with views of “the knob” and unobstructed vitas north to Baldy.

Maximizing views was a design directive and something Ruscitto and team kept in mind at every turn. Rooms and windows were strategically placed for views and for privacy. As Ruscitto says of the process, “we framed the views like pieces of art,” pointing to several specific examples. During the building process they discovered that the view from the kitchen windows was of the house next door, so windows were placed higher. Now the line of sight looks straight up the Valley with nary a structure in sight. In fact, you have no idea that you’re in the middle of Ketchum.

Just down the way on Alpine Lane a homeowner chose architect Tom Kundig of Seattle-based Olson Kundig and Boise builder Guho Group to create a stunning take on mountain modern. Practical, minimal, and on budget were all goals for its construction. 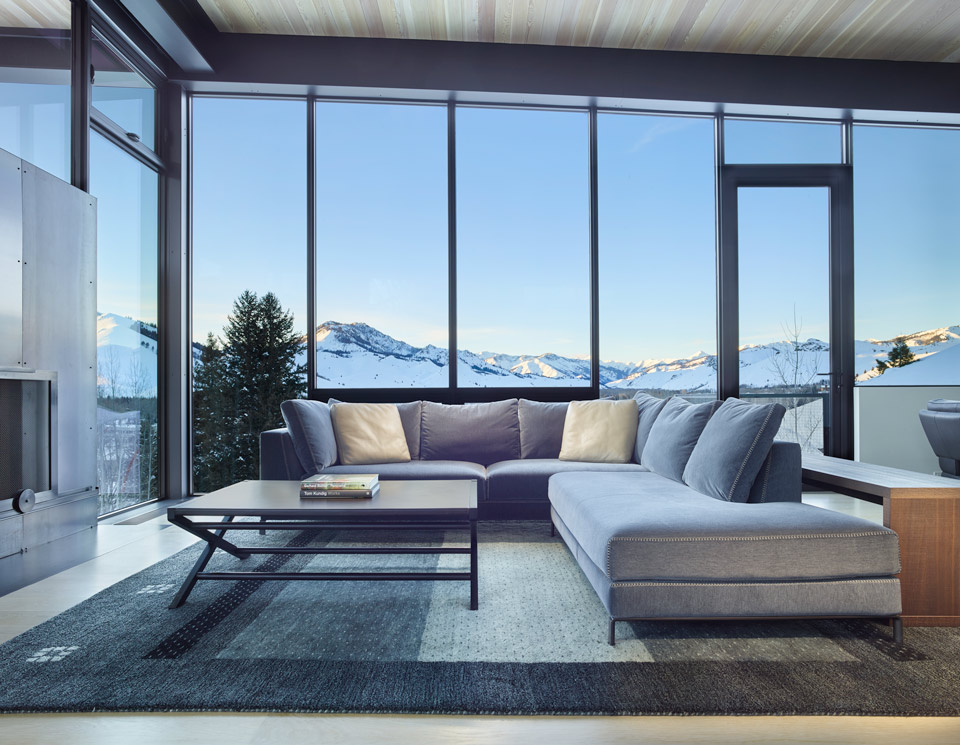 Here too, the team sought to create a very livable space in harmony with its environment. The topography and native landscape provided inspiration and were carefully considered in the home’s design. In describing one of the many specific natural elements that spoke to him, Kundig notes the way the bark and leaves of the surrounding trees change color, not only at different times of the year but also at different places around the property.

Kundig used the lot that extends up from Alpine Lane to Walnut Avenue to its full advantage, creating a structure that’s smart in every sense of the word. Designed to terrace into the steep hillside, interior spaces seem to float above the ground. The garage was cut into the hill, and the entire living area built on top to maximize the views, which are sweeping to the north and to the west, where they Baldy’s runs capture the eye. At little more than 2,000 square feet of living space, the bright and airy home feels expansive yet always intimate. The house, says Kundig, “hunkers down into the ground and back and then emerges into in the sun and the views.”

Energy efficiency was also an important requirement of the Kundig-designed home. Highly efficient fiberglass windows from Canada, board-formed concrete walls, and flat-steel paneling serve as physical barriers but also complement the aesthetic of the home—both rugged and refined. The materials are naturally weather resistant and durable, requiring little maintenance and contributing to the home’s sustainability, weathering naturally over time.

In speaking with Kundig, it’s clear that the parallel visions at work to create this home led to a productive and efficient process throughout design and construction. Kundig and Guho Group principal Mark Guho both speak to the satisfaction of working closely with one another and with the owner, to realize a common goal as a team. “I can’t say enough about those two guys,” Guho says. “They’re a class act, and it was an honor to the part of the project. As far as clients and architects go, they’re a dream team.”

Custom homebuilding is by definition collaborative, Kundig says: “That’s what’s interesting, and it’s always very idiosyncratic,” he explains. “Our job is to ask questions: what’s the climate, the culture, the topography? All these vectors inform the architecture.” Thankfully for those of us who live and work in the Wood River Valley, these owners, architects, and builders got it right. They respected the neighborhood, the elements, and each other, with wonderful results. If you haven’t already, take a stroll up Alpine Lane and see for yourself. 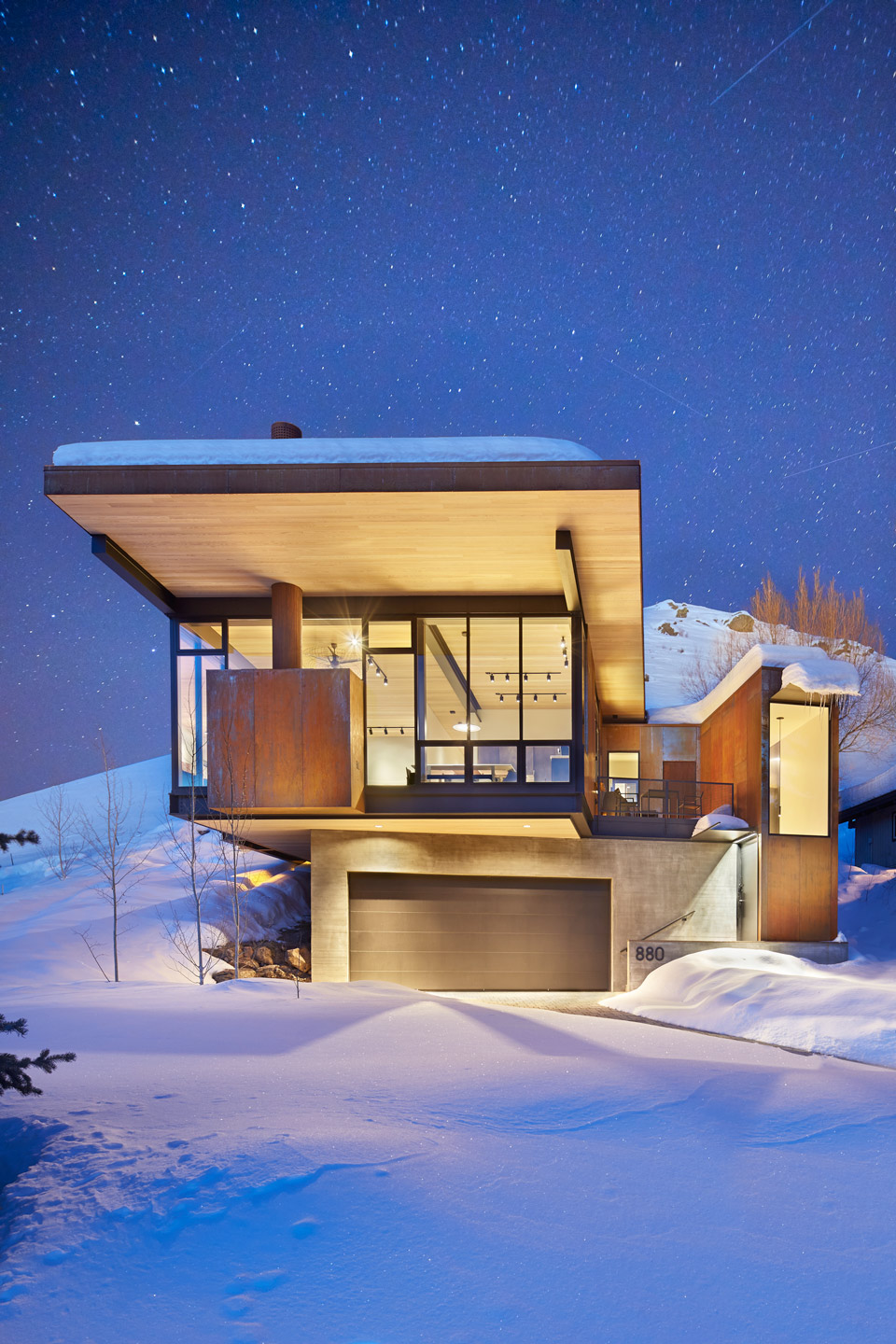